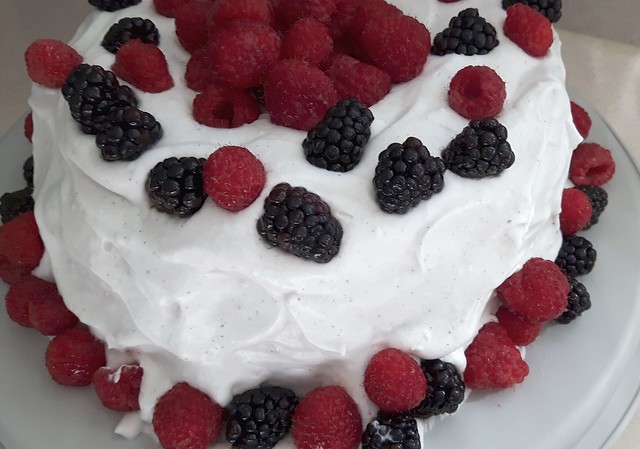 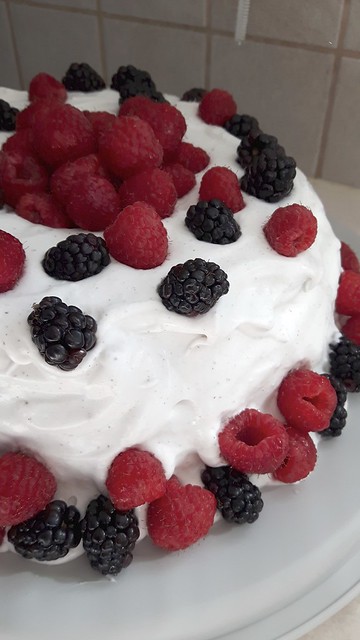 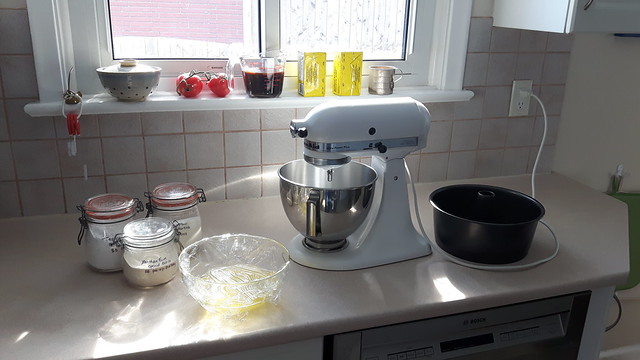 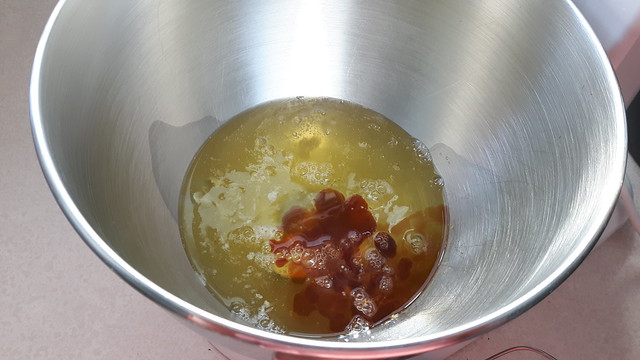 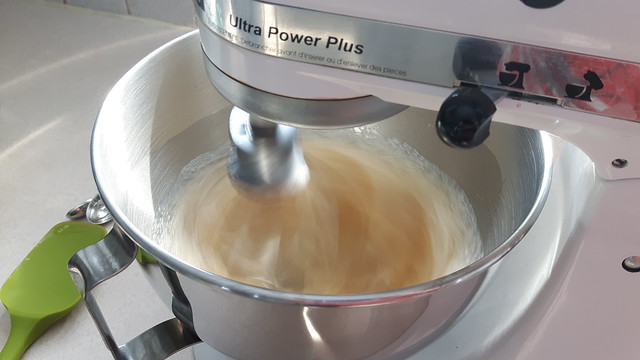 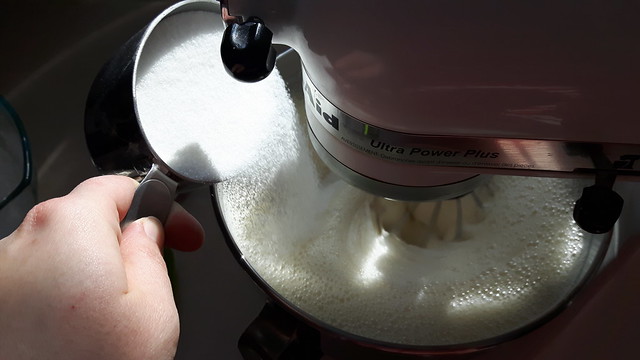 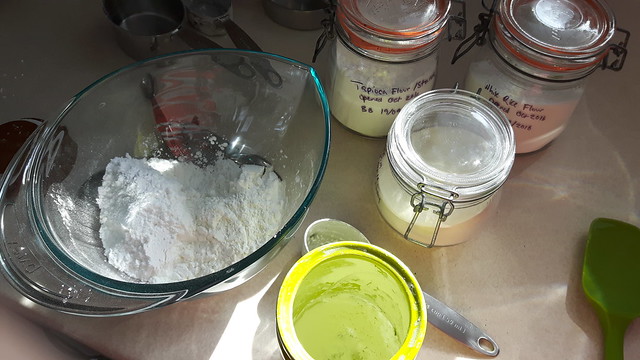 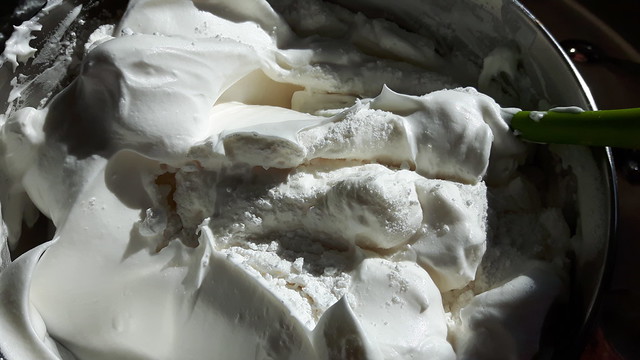 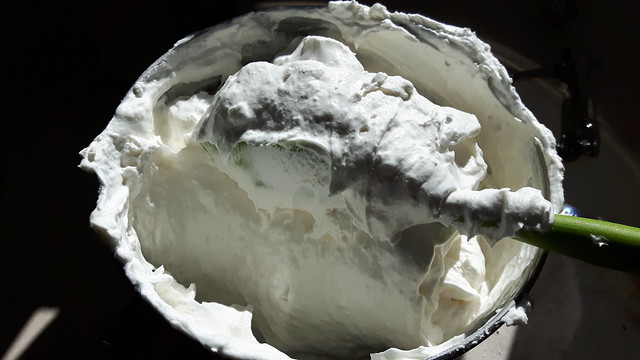 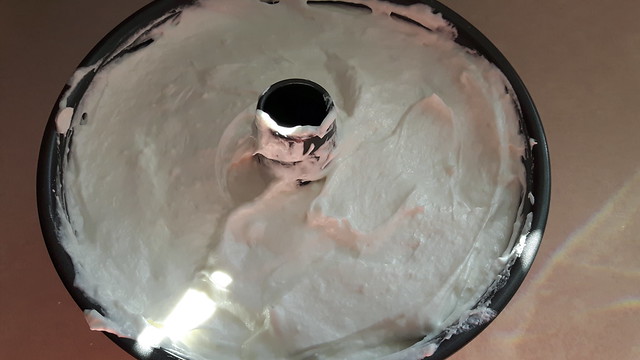 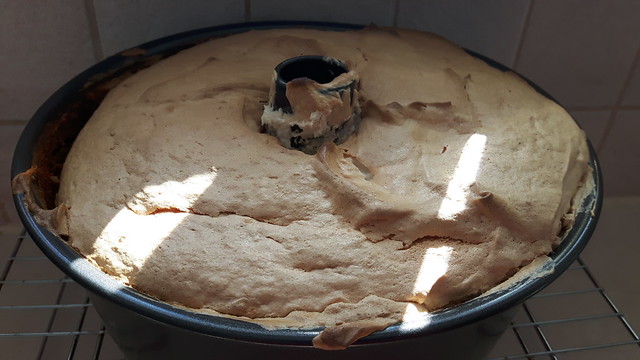 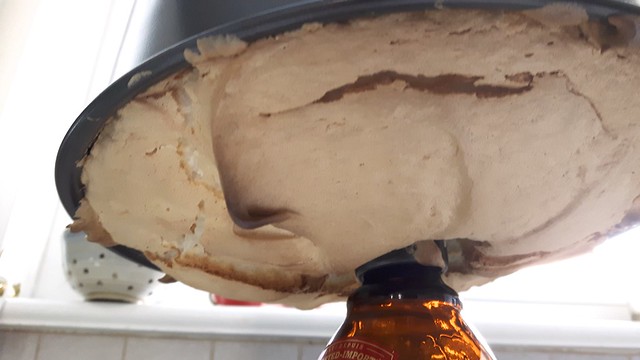 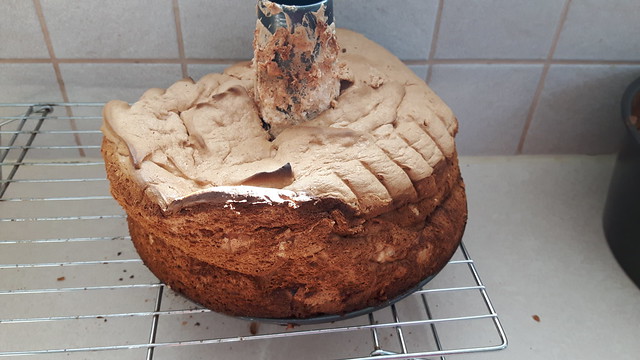 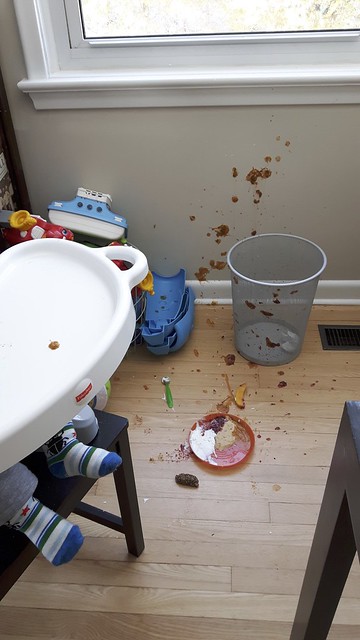 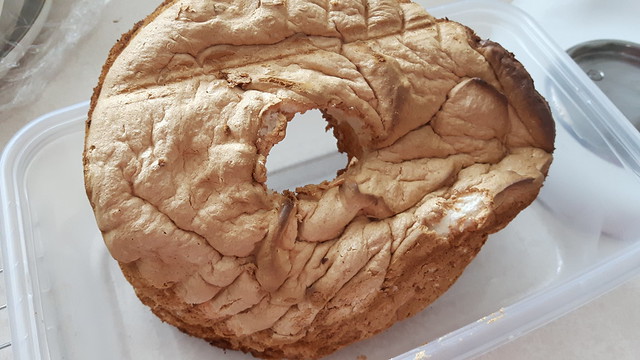 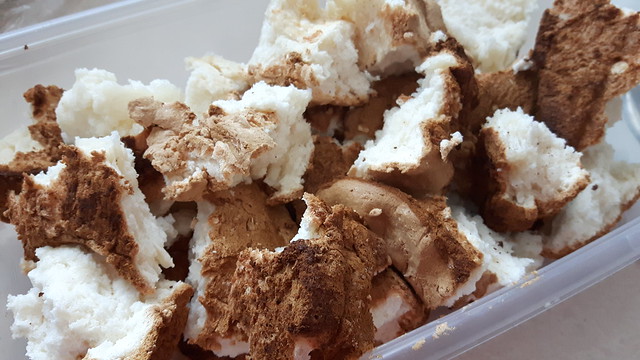 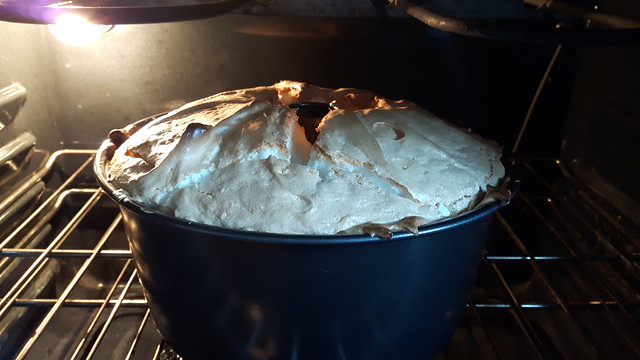 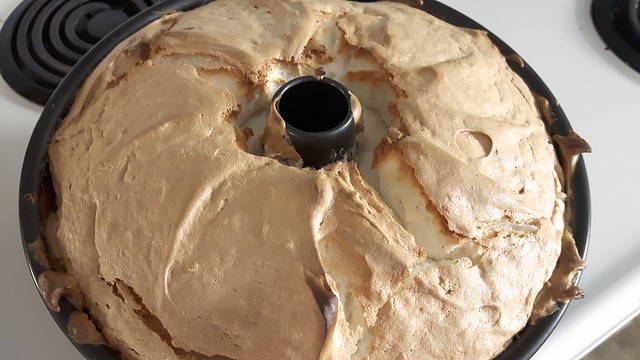 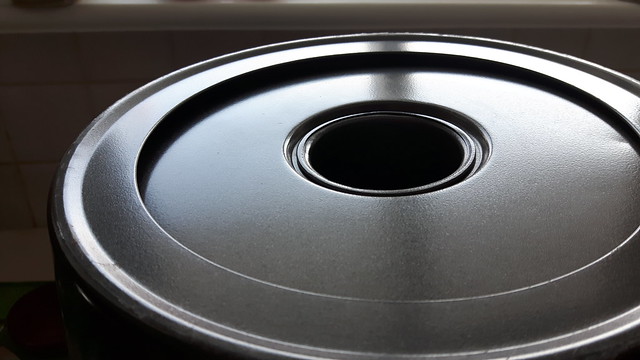 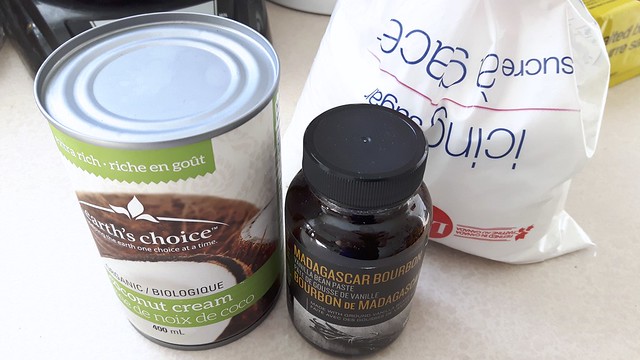 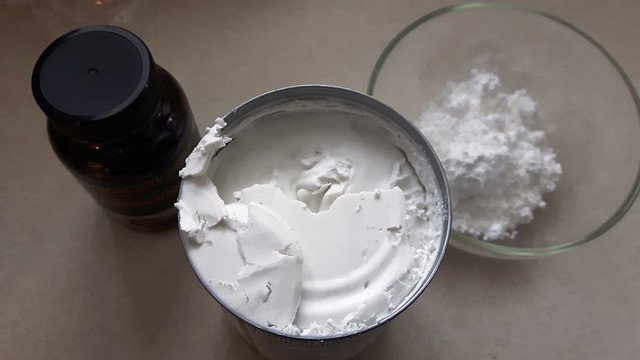 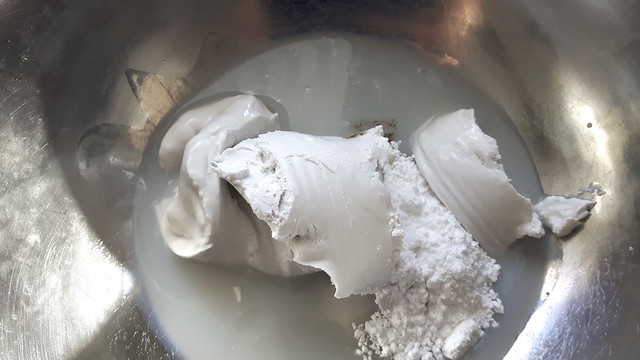 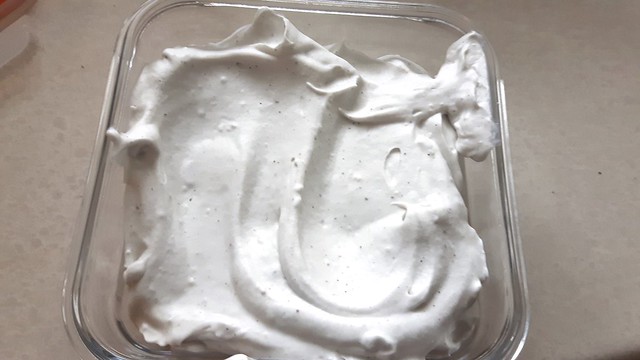 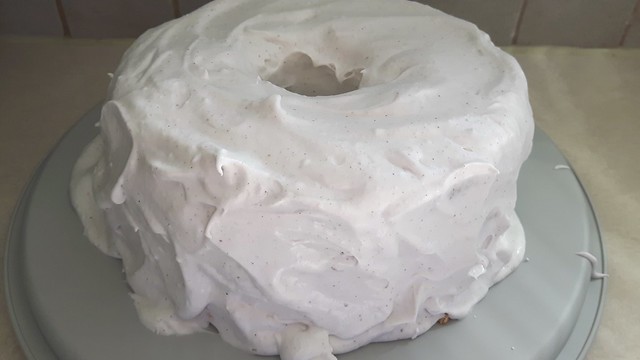 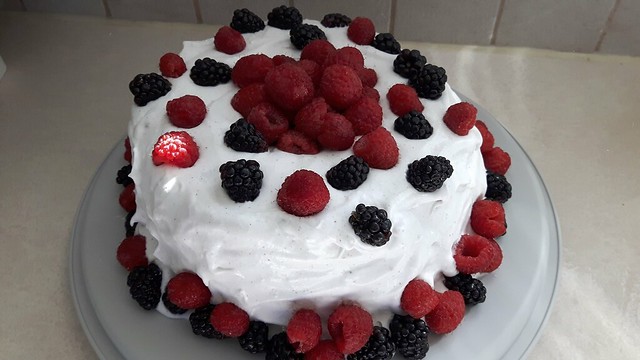 Fussellette sent me this gorgeous recipe from the CBC and I had to try it out after listening to her rave about the results.

The best part about this recipe is that it’s flexible — you can change the flavours around by changing up the fruit you’re using, even using fruit-flavoured yogurt if that’s what you have on hand.  I’d also like to play with the flours a bit, maybe swapping in some coconut or almond flour if appropriate.

Preheat your oven to 375°F and spray or line a muffin tin with paper cups. I recommend paper cups for these, because gluten-free baked goods tend to like to stick to what they’re baked in.

Take 1 cup oats (if you have a sensitivity, make sure they’re gluten-free), and pulse in a food processor until they’re all fine and powdery.  Plop that in a large bowl.

Then add in 1/2 cup each dried cherries, dried cranberries, and golden raisins.  I had this multi-pack with all those in it already, so I chucked that in, together with some chopped dried apricots.

Add the flour mixture to the wet ingredients and stir only until just combined.  It will seem lumpy but don’t fret.  If you stir it too much you’ll end up with flat muffins, which, especially in gluten-free recipes, is the opposite of what we want to happen.

Spoon into your muffin tin (it should make 12 regular-sized muffins or 6-7 super large ones).

If you end up with some empty space in your muffin tin, add a bit of water into the empty cups — it will ensure that your muffins bake evenly.

Sprinkle some more whole oats and maybe some brown sugar on the top of each muffin.

Bake for about 25 minutes, until the tops are firm to the touch.  Allow to solidify in the pan for about five minutes after removal from the oven.  Use a fork to transfer the muffins to a rack to cool completely.  As with most gluten-free material, they won’t last long, so make sure to eat them or freeze them within a couple of days.

Everybody needs a basic cake batter recipe to work from, even those who have a low tolerance for gluten.  Fussellette was coming for Easter and I wanted to serve a cake for dessert.  So I needed to come up with a cake that she could enjoy along with the rest of our guests.

This recipe is adapted from Martha Stewart’s Easy Cake Batter.  I replaced the flour in the recipe with a gluten-free mix I came up with myself, with a little bit of help from Ellen’s Kitchen.  If you are curious as to the right proportions when combining gluten-free flours, check out her suggestions — they are very useful.

First we want to bring all our liquid ingredients to room temperature: 1 cup butter, 4 large eggs plus 2 large egg yolks, and 1 1/2 cups buttermilk (or soured milk). If you want to warm up your ingredients a little faster, try placing them in a warm water bath.

In a bowl, whisk together 2 cups white rice flour, 2/3 cup almond meal (I find that the coarseness of the almond meal gives the cake crumb a springy, solid texture, with no fear of it falling if handled too roughly), 1/3 cup tapioca starch/flour, and1 tablespoon baking powder.  So the final result of this particular combination tastes like a sweet, more tender version of cornbread — it has a finer texture but that’s the best analogy I can come up with.

In the bowl of an electric mixer, beat together your butter with 1 3/4 cups granulated sugar, until it’s light and fluffy and creamy.  Don’t rush this process.  Let your mixer go on high for about 6 minutes, and you will see the difference between butter and sugar that are just well-combined versus butter and sugar that are well and truly creamed together. This is the just-combined stuff.

This is the truly creamed stuff.  It makes all the difference in a cake, especially one where you need all the help you can get to keep the structure light and fluffy.

Mix in your eggs, one at a time, until they are well-combined.  Again, you add the eggs a bit at a time so that the mixer paddle will have a chance to properly emulsify all of it.

Add in at this point 1 tablespoon vanilla extract.

Flip the mixer to its lowest setting and mix in about a third of your flour mixture.  Pour in half the buttermilk and let that get mixed in as well.  Then another third of your flour, mix that in, and the rest of the buttermilk.  When that’s mixed in, add the last of the flour and mix until just combined.  You may need to scrape down the sides of the bowl. This picture is blurry because I like to cook in motion.

Now you have a basic batter with which you can do pretty much anything.  You can turn it into a layer cake, or mix it with other flavours like chocolate or fruit.  Or you can make it into cupcakes, like I did here (the frosting is a package of cream cheese mixed with a cup of icing sugar and some coconut).

This cake here I wrapped up and froze for a future event.

For Easter I poured the batter into two pans and then layered the cake with whipped cream mixed with raspberries.  DIVINE.