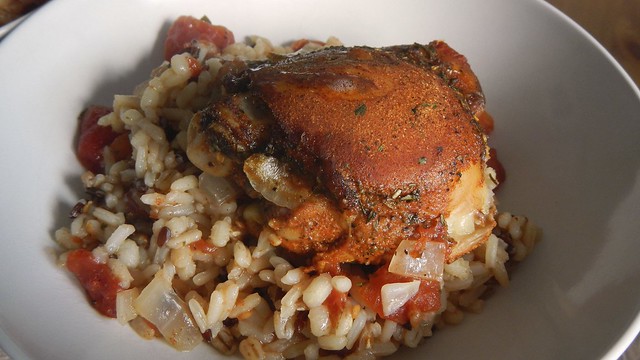 I’m trying to eat more rice these days, and it’s been easy so far with delicious and simple dishes like this one. I then froze a chunk of this and it was oh-so-good, even leftover! 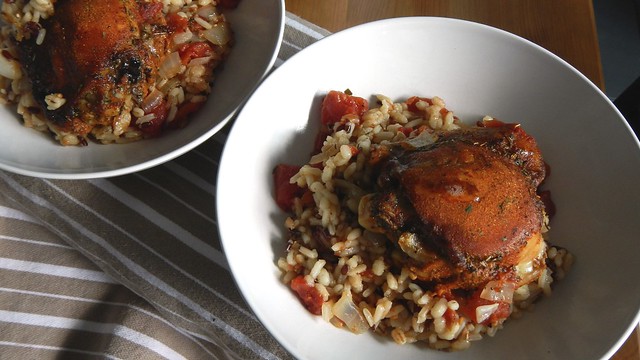 I had picked up some pre-seasoned chicken thighs from Farm Boy a while back and that was my base of things to go with. You can use unseasoned skinless chicken thighs, if you want: this is just what I had. I also had a litre of chicken broth, a 14oz can diced tomatoes, a 244g package of wild rice, a large sweet onion, and some pearl barley.

I also grabbed a healthy handful of pre-mixed Italian seasoning. While I was grabbing these things I preheated my oven to 350°F.

So I cut the onion in half and because it was so huge I only diced up half of it.

On to my grains. 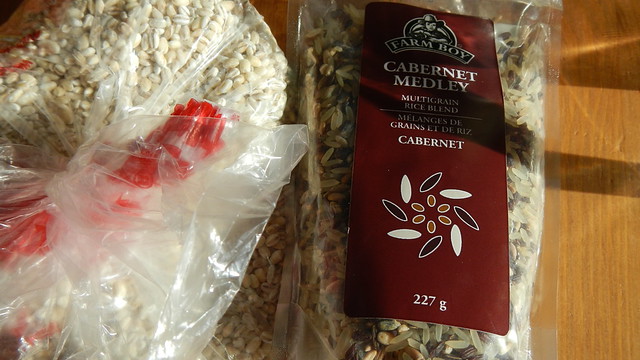 I wanted about two cups of the grains so that I could use all 4 cups of my chicken broth. 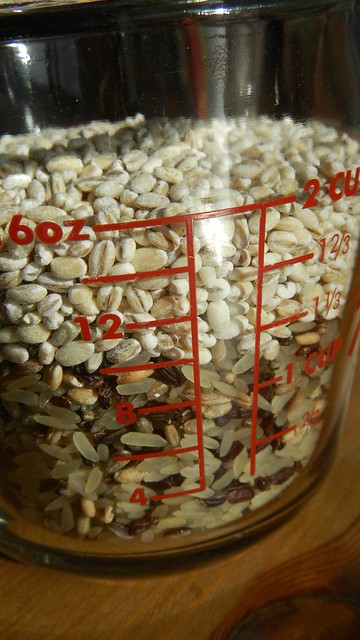 There was some math that needed to be done – I only hoped the juice from the tomatoes didn’t make things mushy. 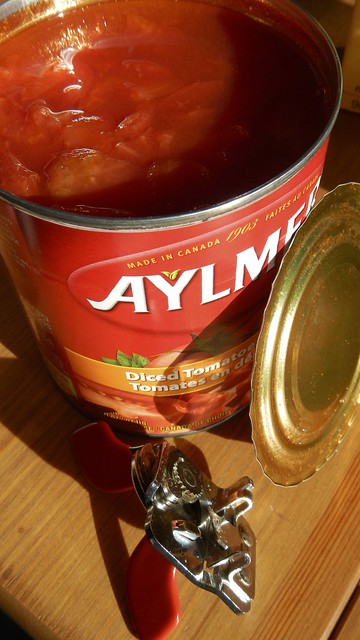 So first I softened the onions in my big skillet with some butter and olive oil. 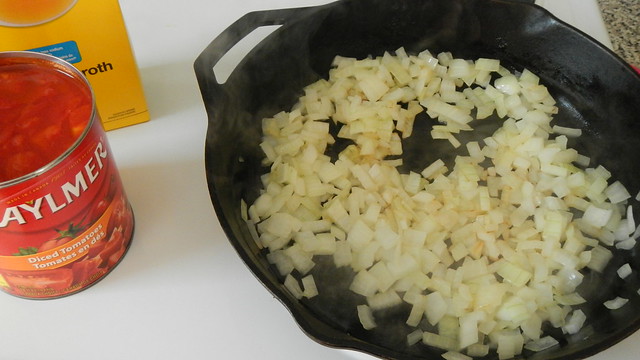 Then I tipped in the tomatoes and the broth. 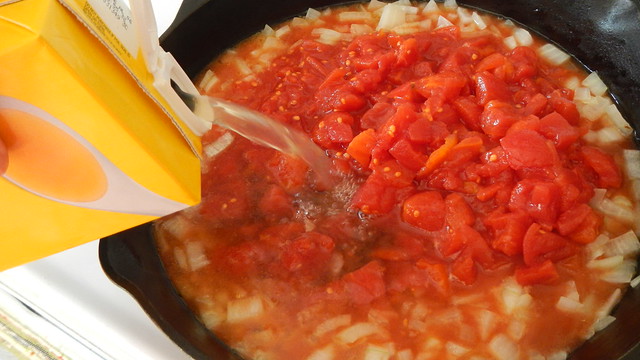 Then the uncooked grains. 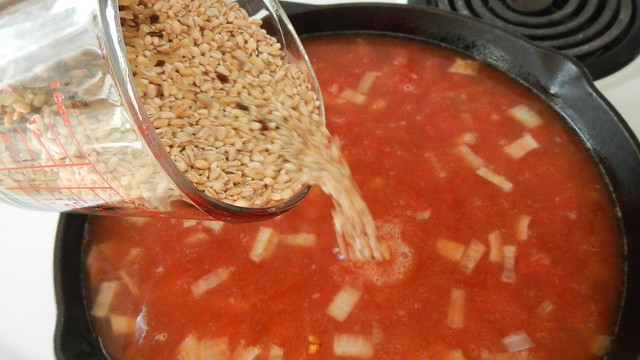 I added a tablespoon or two of the Italian seasoning. Then I gave it a good stir. 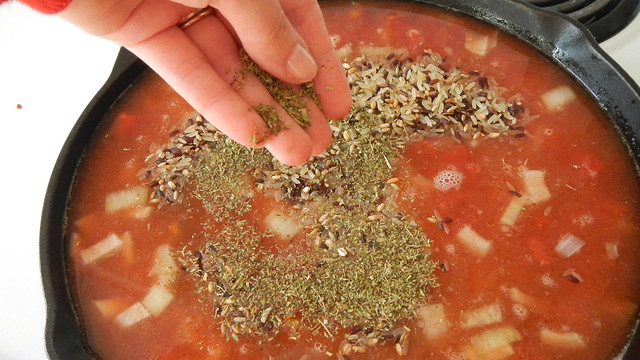 Then I slid in the chicken thighs so they were as on the top as possible. I could definitely have doubled the amount of chicken I used, considering how much leftover rice I had. 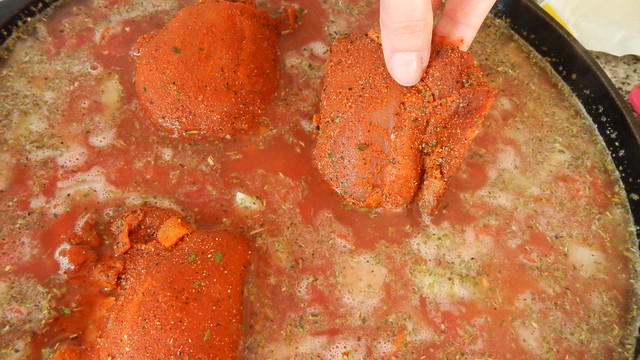 Then I hucked the whole thing in the oven for about an hour. You don’t even need to stir it. 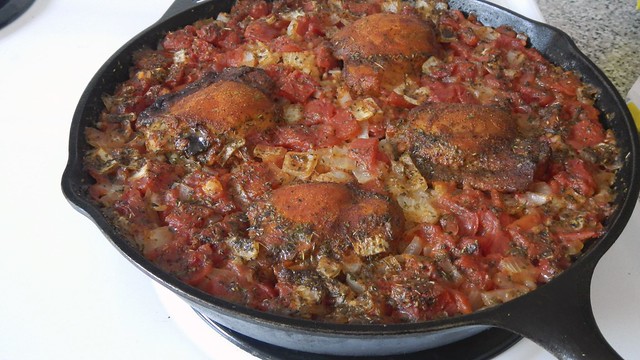 And then this gorgeousness was born. Holy moly is it good! 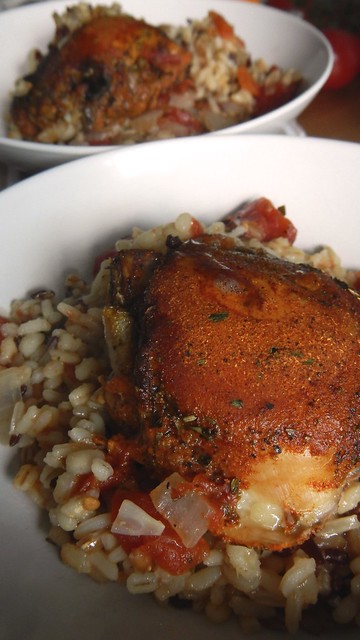 I’ve been on a pilaf kick recently, ever since I had one at the Savoy last week and I can’t even deal with how good it was.  They’re really easy to make, too, just a few extra steps more than plain Jane rice.  Why not? This version serves 6 comfortably, with leftovers.

I had half a 28oz can of diced tomatoes in the fridge as well as some shallots left over from probably Christmas so I figured I’d do something to use them up and take advantage of my overstock of Trader Joe’s Wild Rice Medley.

I chopped up a handful of mushrooms and shallots and set those aside.

Then I dumped a hunk of butter and some olive oil into a skillet and let that melt on medium-high heat.

When it was all melted and foamy I tipped in 2 cups wild rice medley (you can use whichever rice you wish, of course).  I had a bit of black rice hanging around as well so I chucked that in too.

Stir that around until it gets all coated with butter.  You’re basically toasting it here, so you want it to get a bit brown and smoky.

Now you can add in your vegetables and stir them around a bit.

I left the tomatoes until last because I wanted the onions and mushrooms to soften a bit.

Now you add your stock.  Any stock you like.  Just make sure that it works according to your rice’s cooking directions.  This rice requires 2 1/2 cups liquid for every cup of rice.  I had 4 cups broth in my little carton here, plus a cup of liquid in the tomatoes.

Give that a stir, then cover it and let it simmer for the allotted time given in the cooking directions (with mine it was 40 minutes).  I stirred mine occasionally, but only because I’m paranoid about burning rice.  I’m really good at burning rice.

When it’s cooked take the lid off and remove it from the heat and let it sit for about ten minutes.

We served ours next to a bed of greens and topped with a pan-seared half chicken breast.  It was lovely!

I know you all think I’m weird because I don’t like soup.  But spooning hot liquid into my mouth (and spilling it down my face, because that’s how I roll) is not my idea of a good time.  I do, however, have a fondness for stew.  Especially stew with beer in it, because beer is a great tenderizer of things.  And because I like beer.

I’ve had this stewing lamb in my freezer for a while and I decided it was probably time I do something about it.

So I took it out, put it on a plate, and patted it dry with a paper towel.

Then, in a bowl, I took a small scoop of flour, added salt and pepper, and gave it a stir.

Into that I hucked the lamb cubes, and gave them a stir as well.

I heated up my trusty cast iron skillet with a few tablespoons olive oil inside.  Then, shaking the excess flour off the lamb, I plopped it in the skillet to brown.

While that was going on I cut up some vegetables: carrots, an onion, and a package of mushrooms.

I didn’t have any potatoes, that classic stew thickener, so I decided to use rice.  This wild rice blend from Trader Joe’s is excellent.

I took the browned lamb cubes out and put them on a plate to rest a few minutes.

Then I added a bit more oil to the pan and chucked in the vegetables, giving the onions a wee bit of a head start in the cooking.

Once they’ve softened you can add the rest.

Now you can chuck the meat back in.  Then I plopped in some parsley, Newfoundland savoury, rosemary, and thyme.  If I’d had sage I would have used that, just to make up the lyrics to that “Scarborough Fair” song.

At this point I ran out of space in my pan so I transferred the contents of the skillet to a larger saucepan.  I used a bit of beef broth to deglaze the pan a bit and poured that into the pot, along with the rest of the beef broth (about 3 cups).

Then came two cans of Guinness stout (minus a sip or two, for quality control of course).

Then I brought it to a simmer, lowered the heat, and let that gently bubble away, stirring every so often, for about an hour.

Excellent. Even more so the next day.

I’m not sure if I’ll ever really get used to the concept of eating moose.  But when in Newfoundland …

This is a roast from Fussellette’s dad, and I followed her instructions as to what to do for the basics of the whole thing.  The rest was sheer fly-by-the-seat-of-my-pants moose stew madness.

So you plop the roast into your slow cooker.  Then you add your vegetables, like an onion, and/or some potatoes. I had some rather sad-looking broccoli and cauliflower in the fridge, so that went in with an onion. Then you add in a package of dried onion soup.  I’m not usually one to add pre-made mixes to things, but these were my instructions.

Then we need some fluid.  You could add in chicken broth.  Or beef broth.

But I had some mushroom broth in the fridge so I used that.

Which meant that I felt obligated to use some dried mushrooms as well.

I turned it to high and left it for a while.  Later on, I added some frozen green and yellow beans and some wild rice.

And near the end a sprinkle of Bell’s Seasoning. I know it’s for chicken and fish but it’s got my name on it and I couldn’t help myself.

Eventually the meat is done and you gotta pull it out and tear it off the bone before chucking it back in the stew. It won’t be difficult.

Your dog can help.

And there you have it — moose and mushroom stew. Served with toast.