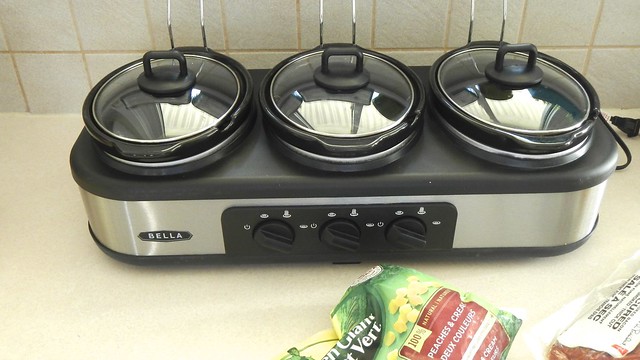 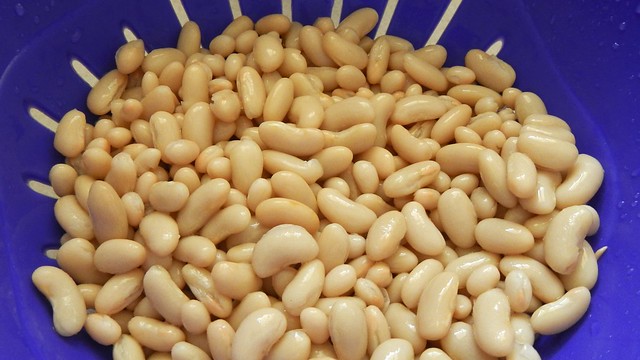 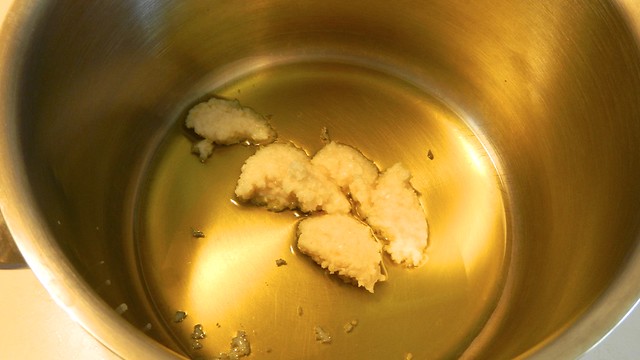 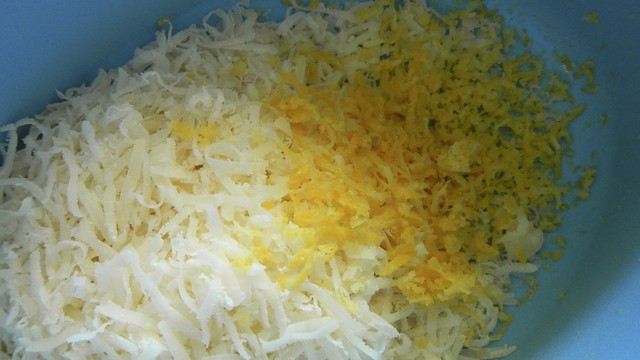 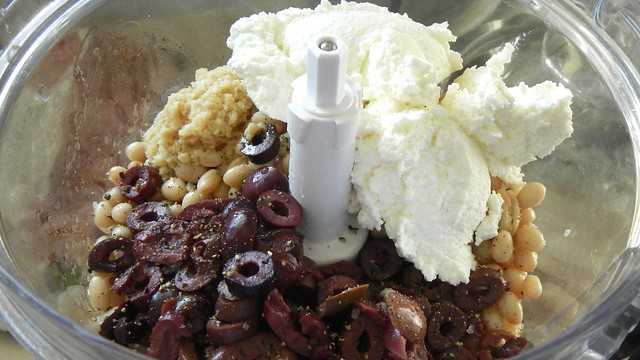 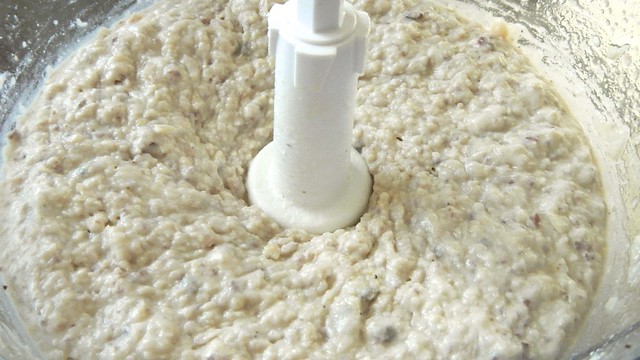 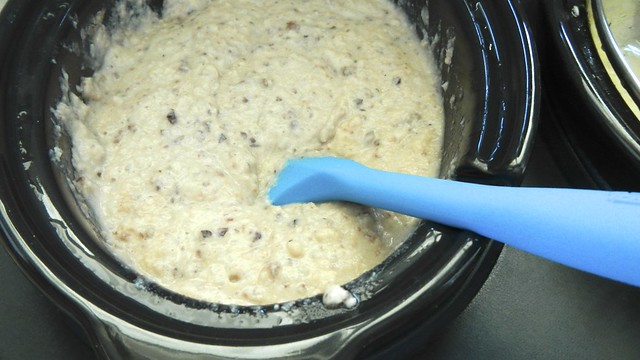 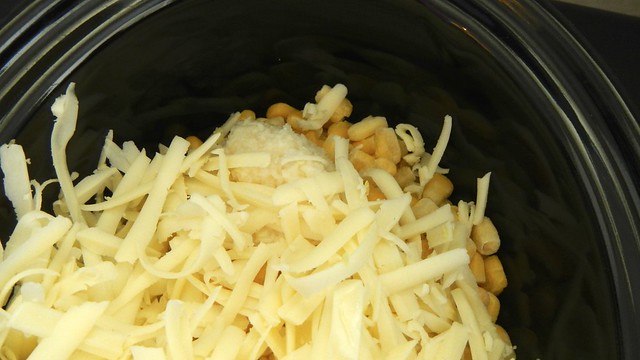 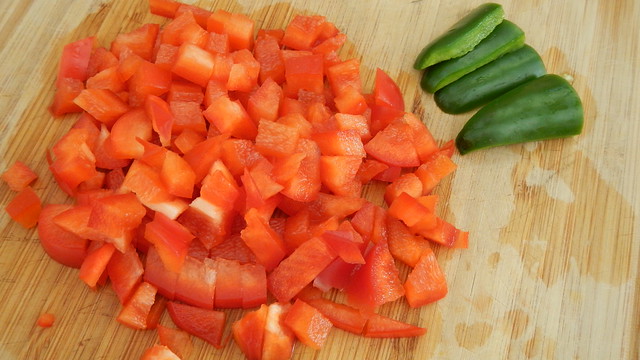 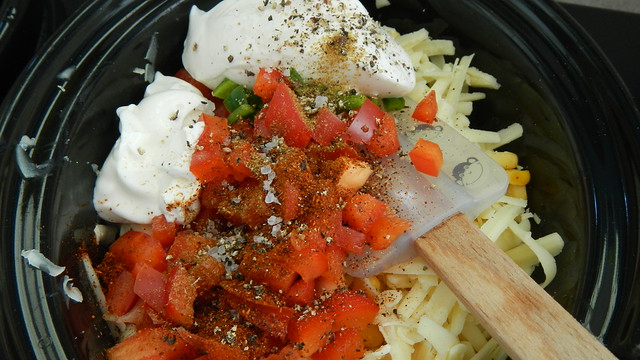 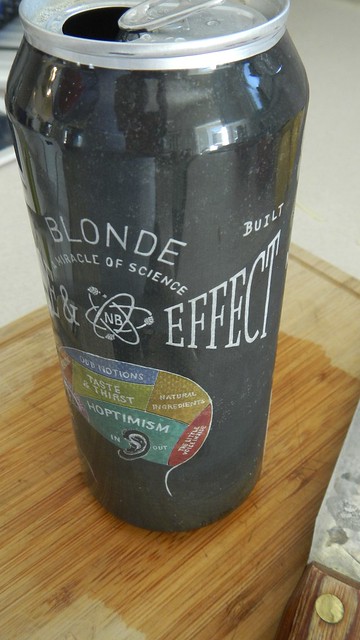 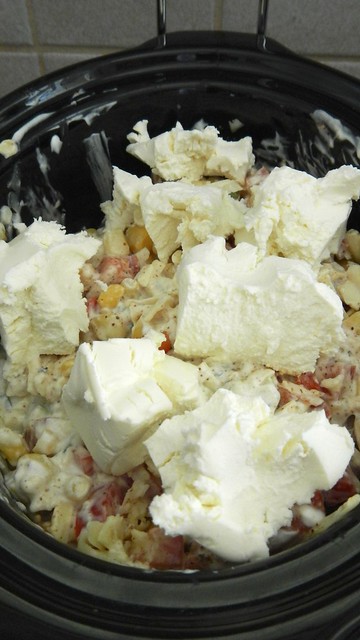 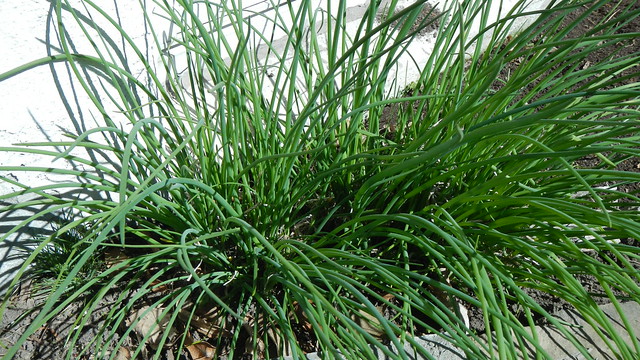 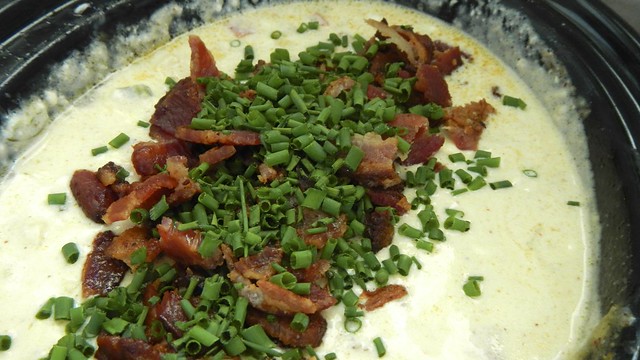 I got this baby from the Ontario White Bean Producers website.  And then of course I modified it.

First you take your beans.  The recipe called for 2 cups of white beans (white navy beans).  I thought this meant 2 cups of RAW beans, but no, it meant 2 cups of COOKED beans.  As a result, I have SO VERY MUCH bean dip.

Anyway, take your beans, in any form.  If they’re raw, give ’em a good cook.  Simmer them in a pot of water for about an hour.  Make sure that your water doesn’t totally evaporate, and add more water if you have to — burnt beans is a smell no one needs to have in the kitchen.

While your beans are cooking (or sitting politely in their can, waiting on your convenience), take a pan and sauté yourself a finely chopped onion with some fresh sage (or frozen sage if you’ve got it).  Once the onions are translucent, remove pan from heat and plop in 6 or 7 cloves roasted garlic (about one head) just to get them warm and toasty.

In a large bowl (with the aid of an immersion blender) or food processor, combine your cooked beans, your onion/garlic/sage mixture, one or two roasted red peppers, cut in strips (from a jar or make ’em yourself), a few dashes of balsamic vinegar, and a pinch or so of sea salt.  Blend that thing silly until it’s smooth and creamy.

Serve as a dip with pita chips or crackers, or use as a bean base in quesadillas, wraps, and sandwiches.

Because I have so very much dip, I managed to foist some off on D and J, and I’m going to try to freeze the rest.  I will let you know how that goes.

On Sunday the Pie and I had KK, Il Principe, and D, J, and S over for an Easter feast.

I have a lot on my plate this week (and I’m not talking about food here) so I’m going to draw the recounting of this tale out as long as I possibly can.  I’ll try to give you a post a day about all the fun and fantastic things we ate.

I love to have dinner parties.  I think it’s my parents’ influence again.  I’m not really happy unless I can stuff someone else with food until he or she feels the need to lie down.  It really makes my day.

That said, entertaining, on a small or large scale, takes a lot of work and a lot of planning.  Timing is pretty much everything, and it takes practice to get it all to happen at the same time.  The Pie and I have it down to an exact science at this point.  We take a gander at what time things are supposed to be done, chuck them in the oven or on the stove at the various points in time we think they need to go in, then we shut our eyes tight and cross our fingers that everything will turn out properly.  Most of the time we’re right but it took years to get us to this stage.

I have also learned the art of making things ahead of time.  This saves a lot of panic in the kitchen when you’re trying to get everything finished at the same time.  If there are some dishes on your menu that can be popped in the microwave or in the oven for reheating at the last minute then all the better.  Another important thing to remember, and something that I only recently learned, is that you don’t have to make absolutely everything from scratch.  There is nothing wrong with adding store-bought chips to your dips, or purchasing bread as a side.  The more stuff you make the more complications you are going to have.  Besides, sometimes the store versions of things are actually better.  You don’t have to have absolute control over everything that goes on your menu, and so that is why, finally, it is also important to let other people give you a hand if they want to.  Kª wanted to bring a salad, and you know what?  I thought that was a great idea.  And it was a great salad.

Items to be posted this week:

White Bean and Roasted Red Pepper Dip (made the day before)

Pita Chips (store-bought — really, you don’t have to be a domestic maven all the time – I get the In Snax sea salt versions from In Foods Inc.  They are totally tasty.)

Ham with Cloves (pre-cooked for simplicity)

Red Curry Quinoa (made the day before)

Spinach Salad with Blueberries, Feta Cheese, and Balsamic Vinaigrette (made by Kª – I don’t have a link because I didn’t make it)

Carrot and Parsnip Butter Mash (made the day before)

Don’t let the name of this soup turn you off: it’s just a moniker my mother applied to any soup she made out of what was left in our refrigerator.

This week I had leftover spaghetti squash from my earlier experiment, as well as leftover cavatappi pasta from our spaghetti night.  What to do . . . ?

The nice thing about soups is they’re dead easy.  I filled a large pot with water and set it to boil.  I added a few heaping spoonfuls of Knorr Vegetable Stock (I use the powder instead of the liquid because I usually can’t use a whole carton before it goes bad and I don’t like to waste it).

I peeled and chopped a large parsnip and a small turnip (actually a rootabega but who’s checking?) and chucked them in the pot, together with a handful of pearl barley and about a cup of dried white beans.  I also added about a cup’s worth of frozen spinach to the mix, as well as the leftover squash and pasta.  There was already a significant amount of basil in the pesto that was on the squash (as well as the hazelnuts and parmesan cheese), so I didn’t add any other herbs to the mix.  When we eat it we usually add salt and pepper to suit our individual tastes.

Once I got the soup boiling, stirring often, I turned it down to a simmer, medium low, for about two hours, until the beans were cooked and the rootabega was tender.

We ate it hot with tabouleh sandwiches, and it was great.

I let the rest of it cool and ladled it into yogurt containers for storage.  I find the yogurt container is a good standard measure for freezing, as it contains about two full servings.