I wasn’t going to post about this, because I do it so often and it’s so simple that I never even think about it.  But the Pie suggested it might be a good idea to let you in on the deal.

I get dehydrated really easily in hot weather and summer in Ottawa is very, very HOT.  Hot and long, temperatures often going up as high as 50°C (122°F) on humid days.  And when I get dehydrated I tend to faint and that is super embarrassing.  Therefore, I drink a TON of water.  But water gets so boring after a while, so I dress it up a little and then I can pretend I’m at some fancy spa.

I have a pretty glass bottle that I keep in the fridge full of water, and it’s a simple thing to just add a bit of natural flavouring to it.  My go-to refresher is lemon water.  I just cut the ends off a lemon, and slice the rest of it small enough to fit in the mouth of the bottle.  Then you just leave it for a few hours and BOOM.  FLAVOURED WATER. 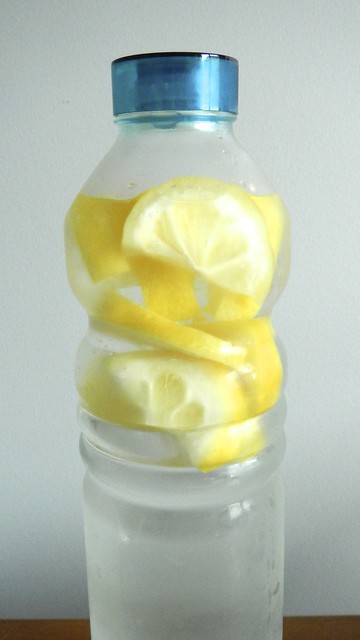 Another good refreshing option is adding a sprig or two of fresh mint from my mini garden to a handful of fresh raspberries. 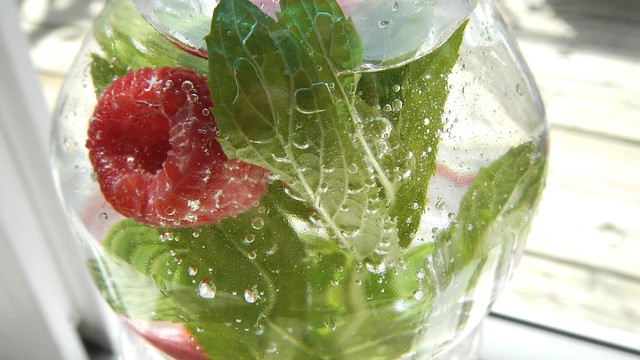 For something more subtle, try cutting up half a cucumber and sliding that into the water. 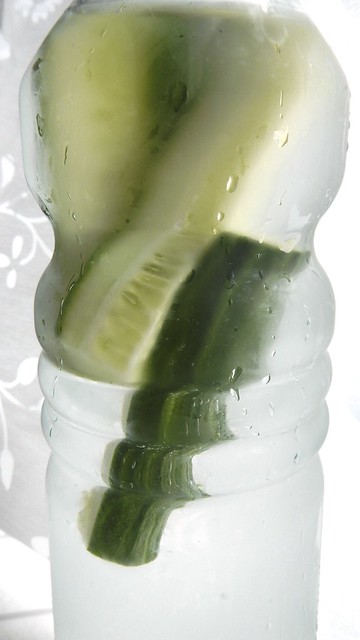 And the extra fancy option is a few sliced strawberries and some fresh basil leaves.  I think this one is actually my favourite now. 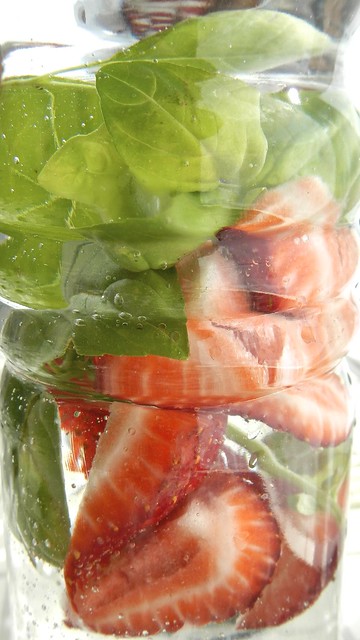 I find that I can keep topping up the bottle for a couple of days before the vegetable matter in it starts to get squishy and needs to be composted, and the water starts to lose the flavour.

The harbingers of summer here in Newfoundland are not the dandelions taking over the green spaces (although they do that, too), nor are they the rare but blindingly beautiful cloudless skies.

No, they’re icebergs, and their smaller components, growlers and bergy bits.  Actually, now that I think about it, that’s pretty typical of this upside-down province: ice is the herald of warm summer days.  After all, Gren and I were out in a (short) blizzard just three days ago.

When the Pie and I were here house-hunting in June of 2008, St. John’s was experiencing one of the best years for icebergs in a long time.

Then we moved here, and, true to form, saw barely any ice for the next three years.  This year, however, is another good one for ice, and you don’t have to stray too far from town to see it. This one was nestled in Quidi Vidi Bay a few weeks ago.

It was worth struggling over slippery rocks in high winds and sleet to get a better view.  Unfortunately I only had my phone with me, so the picture quality isn’t what it could be.

The Pie wasn’t too happy without his touque.

These ones are off the shores of Blackhead, a tiny ancient settlement between St. John’s and Cape Spear.

I wanted to get all three in one shot but they were really far apart.

We headed a little further south to see if we could get a different angle and ended up at Dead Man’s Cove for these pictures.

A very nice lady took our picture with a berg.  Unfortunately the berg looks more put together than we do.

Then we found these bits up in Middle Cove.

That’s the Pie down there on the beach.

There were bits of ice all broken up on the beach.

I got to touch a piece.  It was very cold.  If I hadn’t been worried about the pollution I would have taken it home and put it in a drink.

We didn’t have much of a summer in Newfoundland, so when the Pie and I were visiting family in Ottawa we took advantage of the proximity to our cousin’s cottage and decided to teach Grenadier how to swim.

Now, some dogs, like labs, goldens, duck tollers, and PWDs, are born swimmers.  Other dogs, especially those whose front ends are significantly heavier than their back ends, like pugs, bulldogs, daschunds, and yes, corgis, are not.

Even so, it was something we wanted to get Gren used to doing, just so he would have some options on a hot summer day.  Aside from some wading about and a briefly traumatic fall into a turtle pond, Gren was a land-lubber.

For safety’s sake, and because corgis are not natural swimmers, we got Gren a dog’s life jacket.  Make sure when you are looking for a life jacket that the seams are tightly sewn and the workmanship looks good.  Ensure that the fit is correct for your dog’s weight, as well as his length.

You should be able to comfortably lift the dog up by the handle of the jacket when the jacket is properly secured. This handle is especially useful when your dog falls off your boat and you can just haul him back on.

This Outward Hound version is widely available and nicely affordable at around thirty bucks retail.  I like the additional flotation under the chin, which helps keep the dog’s head above the water — this is a plus (and a must) with brachiocephalic dogs like pugs and bulldogs, who don’t have the long snouts of other dogs.  And remember that even with a life jacket, you should never leave your dogs unsupervised in the water!

Gren likes to paddle in the water, but he’ll never be a big swimmer.  Whenever we had him out over his head his first move was to head for shore.

He did swim out to “rescue” the Pie at one point, because he was too far away, but that was the only time he left the shore of his own will.

He was really not a big fan.