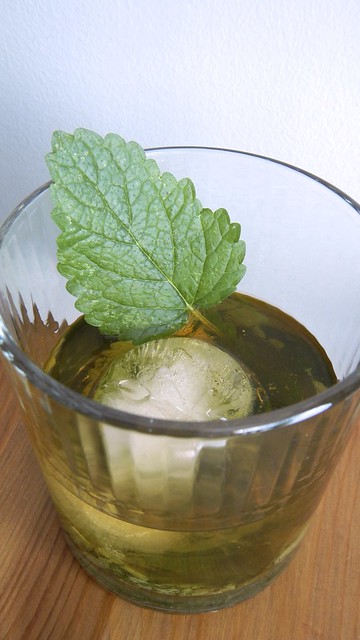 This year, Ottawa marked one of the hottest summers on record. I’m sure that wherever you are, the super el Niño occurring this year really messed with your summer. Here in Ottawa, summer is very reluctant to let go, and the temperatures here in September are only now just starting to cool down to what they should be. 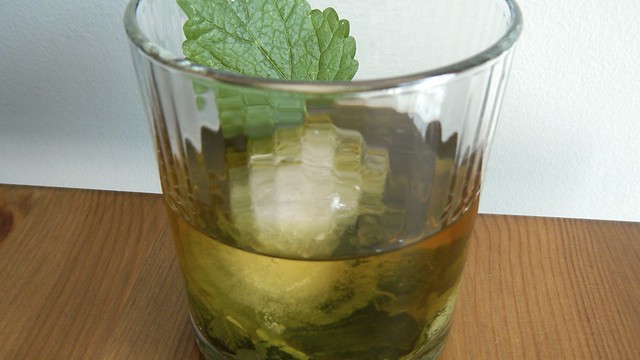 As it still feels like summer, why not enjoy a summer beverage on this lovely Friday? Yes, it’s yet another bourbon drink, but bourbon is such a very adaptable alcohol – there’s so much you can do with it (and Trav drinks a heckuva lot of it). This is a twist on the traditional mint julep, which is made with bourbon and mint and sugar – that’s it. 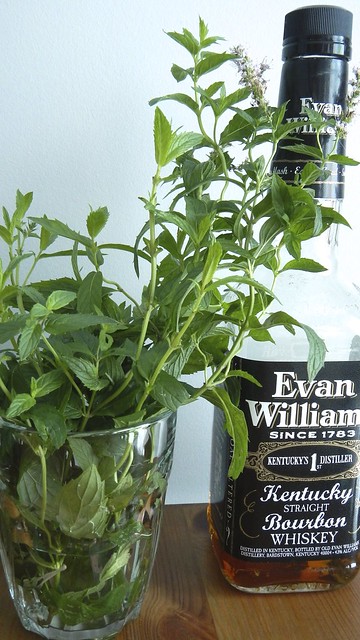 Trav and I decided to take advantage of the massive amounts of lemon balm taking over my garden (so I can make more lemon balm tea) and do a wee varietal (lemon balm is also mint, after all). We also used honey syrup instead of regular sugar syrup (which is 1 cup honey dissolved in 1 cup hot water). 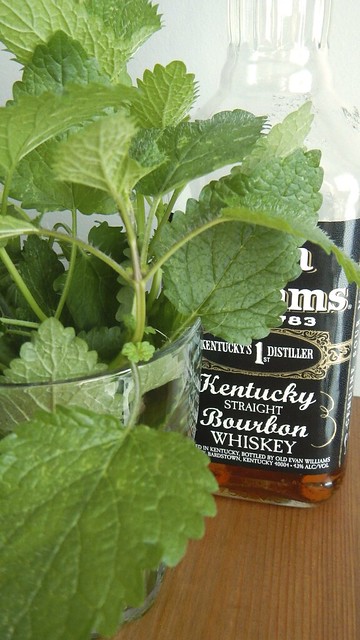 Grab yourself a glass of some sort. I didn’t have any silver julep cups on hand because I’m not that fancy, so this is just a tumbler that used to be filled with weird Italian effervescents for digestion. Shove about 8 or 9 lemon balm leaves into the bottom of the glass. 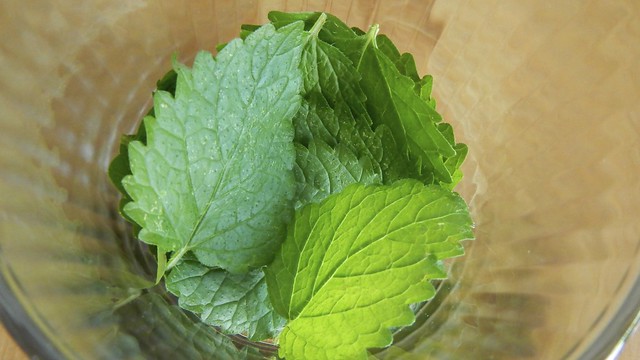 Tip in 3/4 oz honey syrup, and using a muddler (or a spurtle, because I’m not fancy enough to own a muddler), proceed to squish the crap out of your honeyed leaves. 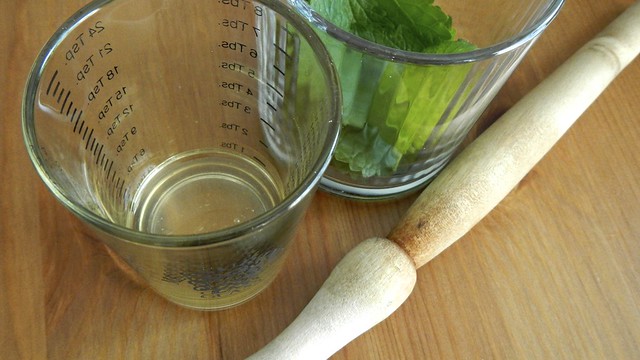 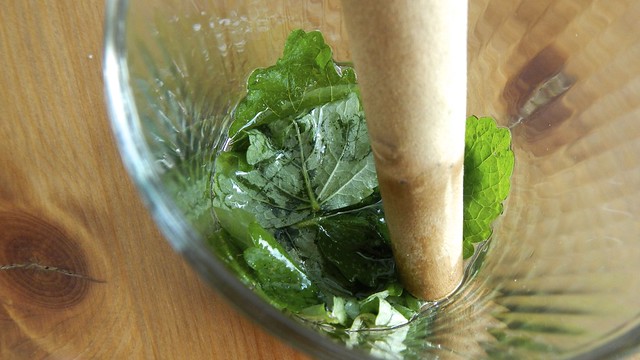 Now pour in some decent booze, about 2oz bourbon to be exact. I like this Evan Williams kind for this drink because it’s a little fruity. 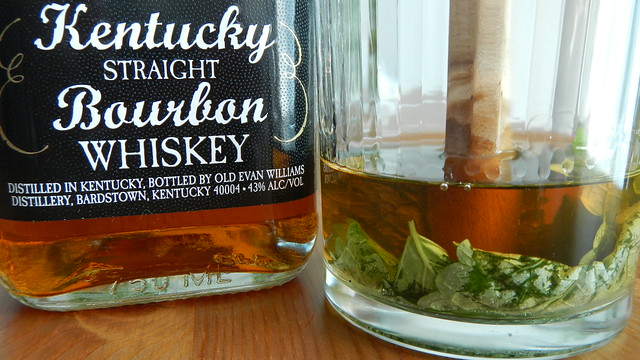 Top with some ice cubes. Or one giant one. The ice will hold the leaves down so you don’t sip them up accidentally. 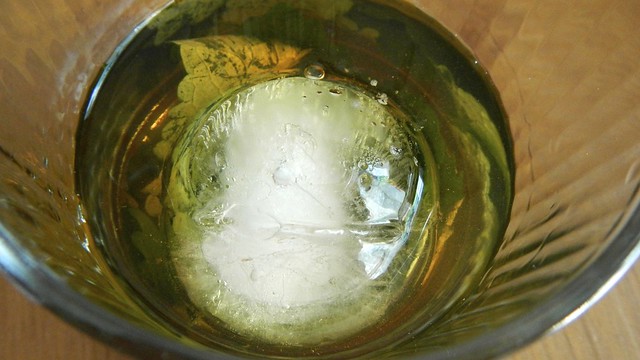 Sip it whilst calmly admiring your bumper crop of lemon balm. 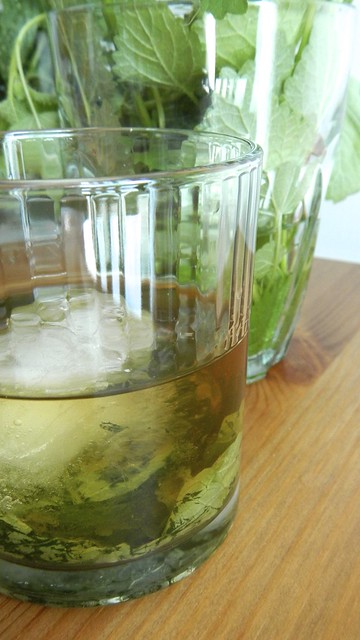 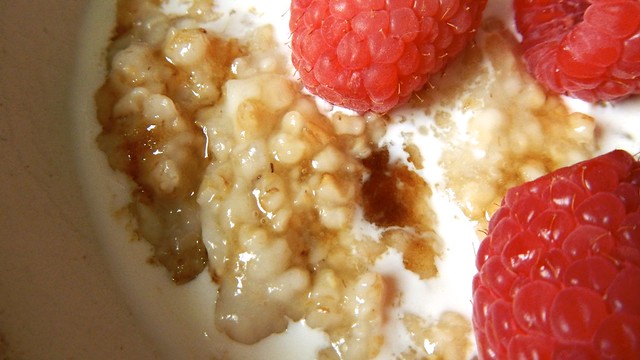 When we were growing up, porridge was a warm breakfast treat in the mornings that my mother could whip up in no time at all.  We weren’t limited in the amount of raisins we could apply to the steaming cereal.  It was heaven.  When I met the Pie I learned that HE had been allowed to put brown sugar on his porridge in addition to raisins, and this level of indulgence is my favourite to this day.

Some people don’t like porridge (or oatmeal, as you Americans seem to call it), and that’s fine.  I remember reading somewhere that Scots can take anything horrible and turn it into a practical virtue, and eating porridge was one of those things. 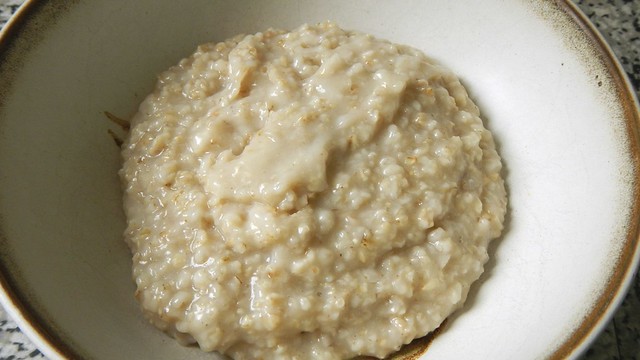 Because porridge is so easy to make, though, it always kind of blew my mind to see the varieties of “instant” breakfast oatmeals available at the grocery store.  When I tried them, they always tasted gluey and artificial.  And really, two minutes in the microwave is not that much faster than five minutes on the stove.  Granted, you have to remember to soak your pot afterwards, but that’s not really a big deal. 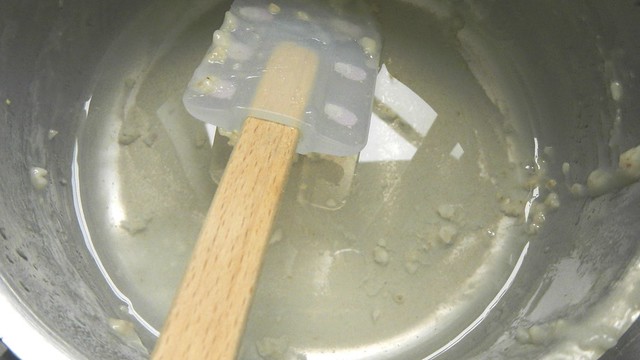 Let’s get to it, shall we, so I can show you how easy it is?  I tend to add all sorts of other grains to my oats to jazz them up, but today (and because we just moved and I haven’t restocked my pantry yet), I’m just doing regular plain porridge.  For this, you will need rolled oats (I’m using quick oats here but I don’t find them much faster-cooking than regular ones), water, and a pot. 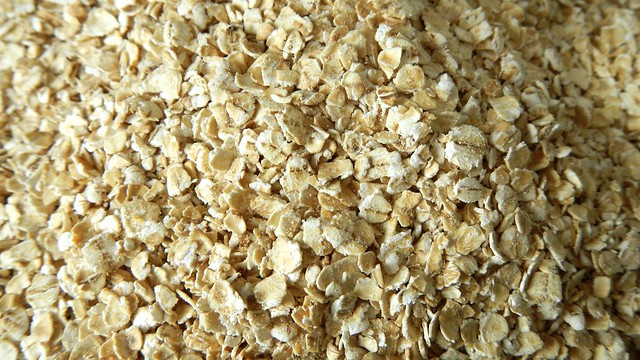 Oh, and a spurtle.  If you don’t have a spurtle (basically a glorified stick), you can use a spoon for stirring but you will find it less satisfying.

The magic ratio for porridge is the same as it is for making basic rice: two parts water to one part grain.  The magic serving size for the Pie and myself is about 1/3 cup each uncooked.  Once cooked of course the oats expand considerably.  So for a serving for two, start with about 2/3 cup rolled oats. 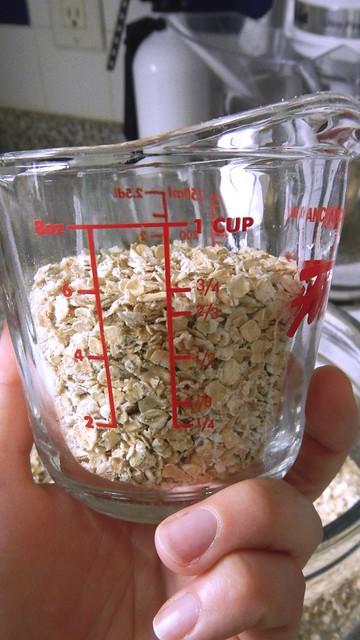 Plop those in a pot and then pour over that 1 1/3 cups water. 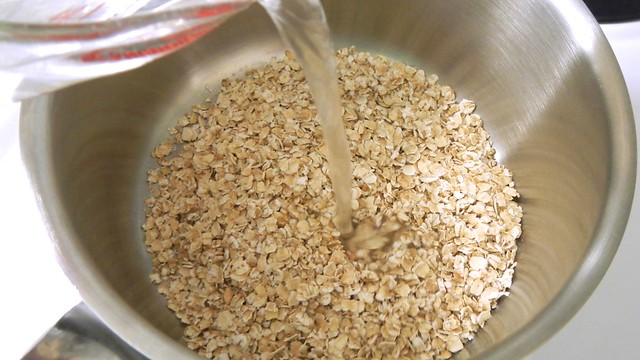 Heat on medium, stirring frequently, until the porridge begins to thicken and bubble (this can take between 5 and 10 minutes, depending on what kind of oats you have and how many you are making — for quick oats it’s about 5 minutes).  Make sure to keep stirring or the whole mess will stick horribly to the bottom of the pot. 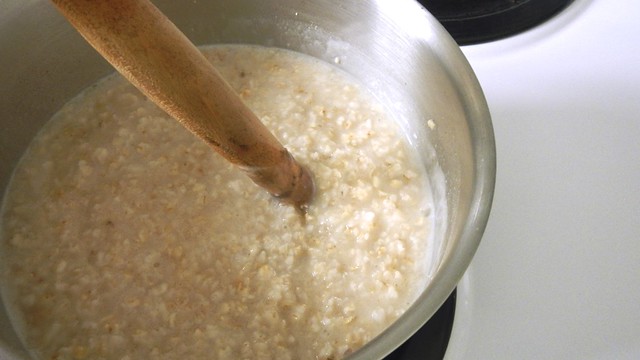 Serve in bowls, garnished with a bit of milk or cream, and a sprinkling of brown sugar.  We topped ours with fresh raspberries because we don’t yet have any raisins.  Some people like their porridge buttered and salty, but I prefer mine sweet.  I also like to toss dried coconut and fruit into the pot when I’m cooking the oats (just add a little extra water), together with some ground flax and cinnamon.  Yum! 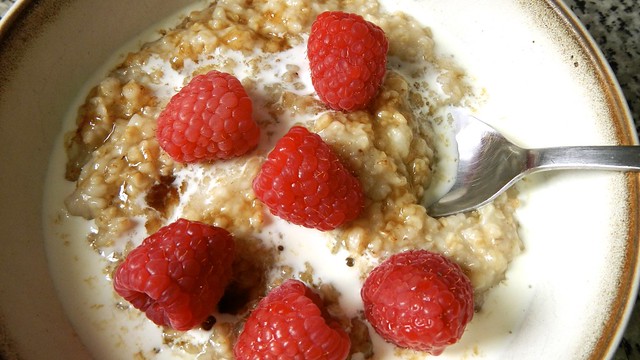 The Pie and il Principe share a birthday.  Sure, the Pie is now 29 and IP is only 2, but they can still enjoy the festive atmosphere of a birthday party.

The Pie and I thought that we would combine il Principe’s love of vehicles with his destructive tendencies, and a piñata filled with toys (because this 2-year-old has enough extra energy) was the perfect gift.

First, I spent a peaceful evening with the dog when the Pie was out tearing strips of newspaper.  These are old copies of a certain legal newspaper popular in these parts.  While it’s a very good newspaper, I must admit to a certain satisfaction in tearing up all that legal verbiage.

I also prepared my helicopter rotor blades (I decided that this particular helicopter has six blades, so there), as well as the tail and all the other bits.  I pulled old cereal boxes and such out of the recycling for this.

And I cut up some clear plastic out of the recycling to use as windows.  This is going to be one classy chopper.

So now that you’ve got everything ready, you need to make your paste.  In a bowl, mix together 2 cups flour with 3 cups water.

I like to use a spurtle to stir my paste.  That’s right.  A spurtle.

Mmm, pasty.  Everyone always makes jokes about “that kid who ate paste” in kindergarten, but we didn’t have that.  We did, however, have the girl who, when asked, DRANK (like I’m talking glug-glug-glug) Elmer’s School Glue.  Bleugh.

And now we need ourselves a balloon, which forms the basis for many, many papier-mâché projects.  The last time I did papier-mâché I made an enormous head with a huge nose, cut out holes for eyes, borrowed one of my dad’s fedoras (he also has a large head), stuck a Press Pass in the brim and went around for Hallowe’en as a reporter.  It was a good costume.  I swear.

I attached the tail to the balloon with tape.

Now we paste strips!  Run one side of your strip through the bowl of paste.

Use your fingers to squeegee off the majority of the paste.

Slap that baby on your structure and smooth it down.

Continue with more strips, being careful to slightly overlap each one.

If you need help with balancing your project as you work, why not try propping it up in a bowl for stability?

Once you have finished a complete layer, use your fingers to smooth on some extra paste.

Let that set for a bit to become tacky and sticky.  While you’re waiting you can put paper on your other bits.

For the wheels, for example, I wanted a little bulk, so I dipped a few strips, crumpled them up, and stuck them to the wheel template before wrapping the whole thing in other strips.

Set those aside somewhere to dry.

Repeat the layering steps a few more times, creating three or four layers of paper on your main structure.  The focus should be on creating what will be a hard shell around your balloon.  I tried to add a bit more paper at the bottom of the chopper-balloon to help compensate, balance-wise, for the weight of the tail.

When you have enough paper on your structure, put it somewhere out of the way to dry overnight.  The top of our fridge is as good a place as any.  Plus it’s nice and warm there (our fridge is ANCIENT) and with the current humidity I’m hoping it will give the paste a boost in drying.

I saved the extra paste, just in case.

Now to clean up!

The fortunate thing about flour paste is you just have to wet it again and it comes off anything really easily.

Actually, this was two days later.  It was so gloomy and humid that the darned thing just would not dry.

So now we get to get around to our painting and assembly.

We bought this lovely metallic blue paint at the dollar store and thought it would look good on a helicopter.  It did, but the problem was that it was transparent paint, something the made-in-China label didn’t tell us.  Nor did it tell us that the paint fumes were highly objectionable.  But you get what you pay for of course.

Onto plan B, then.  I painted the props and the wheels with the silvery-blue stuff and went off to find a more opaque solution to the plane problem.

Thus I came up with India ink.  And ink is awesome because it dries really fast.

Mercifully, just as I’d finished, the sun came out, so I left everything to dry for a bit.

So now we need to cut out a wee hatch through which to insert the prizes.  Using a box cutter, carefully pierce your shell and the balloon underneath.  POP!

Cut a hole only just big enough for your purposes, leaving a little flap so you can close it up again later.

There’s that shriveled balloon.  You can throw that out.

My helicopter is going to have a window, so I measured the “glass” to the side of the chopper.

Cut out a hole.

I think I may use the piece I cut out to make a fascinator at some later and unrelated date.

I fixed the window in place with hockey tape, that lovely universal adhesive.

I used a paper punch awl to poke holes to hang the suspension wires from.

You can see that balance is going to be an issue here.  I ended up taping a few rocks into the tail of the chopper to balance it out.

I stuck the props on.  The wheels refused to stick and were therefore scratched.  Bye-bye b’ys.

Don’t forget to put your prizes in!

Then the helicopter needed some accents.  On one side of the tail I painted on il Principe‘s initials and the year he was born, to look like some kind of ID code.

On the other I did his birthdate (21 July) followed by HB – happy birthday.

Then I added some dots that represent flashing lights, and blacked out the frame parts of the window.  And yes, I just made up where they went.

And there you have it.  Il Principe can’t wait to destroy it.