There’s a story behind this one. My dad, in his office, has a massive collection of pictures of various RCN ships he was involved with, ships’ crests, together with some sketches my grandfather did during the war. It’s a very nautical room. For his birthday yesterday, I wanted to give him another nautical trinket, using that nifty new technique I learned of gel transfers … but on wood.

The two most important ships in his history (that I can remember at least) are the HMCS Miramichi, which was his first command, and the HMCS Regina, which he commissioned as Executive Officer and which was the last ship he was on before we moved to Ottawa and he eventually retired.

In debating which ship to use, I was having trouble finding a good one of the Miramichi. It’s no longer at sea so there aren’t too many shots of it on the internet (if you do a Google image search you come up with only a handful of pictures of the exact Miramichi – 163 – I’m looking for). Except perhaps this one, which looked really familiar to me:

You see those two people standing in the foreground? That’s my mother on the left, and the short one is me. I have my hands behind my back because I used to like to stand like a weirdo, and my mother is taking a picture with her camera, which is why her elbows are up. There weren’t many other little girls living on that particular base at that particular time, so it is definitely me and my mum. Whenever my dad went off to sea we would go down to Duntze Head (which is where those cannons are) to wave goodbye. When he came back, and he sailed past our house (yes, I was that lucky), he would have someone signal us in gibberish Morse code. It became a sort of tradition. 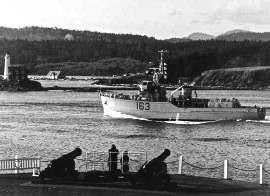 So anyway, because I’m actually IN that photo, that’s the one I have to use, naturally. It’s not a terribly high-quality shot – taken before digital photography became really popular, this was clearly developed from film and then scanned on some terrible early digital-era scanner (I am that old), so when you blow it up it doesn’t look perfect. But the nice thing about these gel transfers is that the lack of detail actually improves the result. So I cropped it to fit on my work surface, boosted the contrast, and desaturated it. Remember when you do this to print the image with a laser printer or photocopier, as inkjet images are too heavily sunk into too many layers of the paper to work properly. Also remember to print it in reverse! 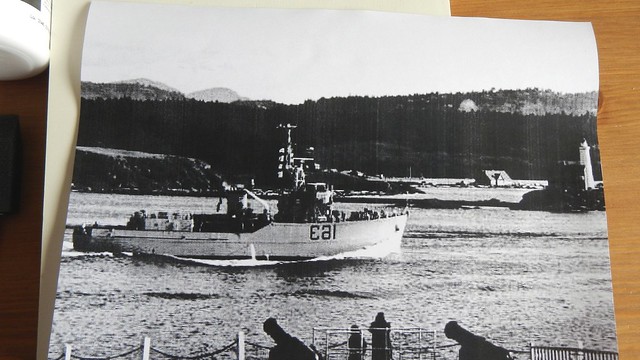 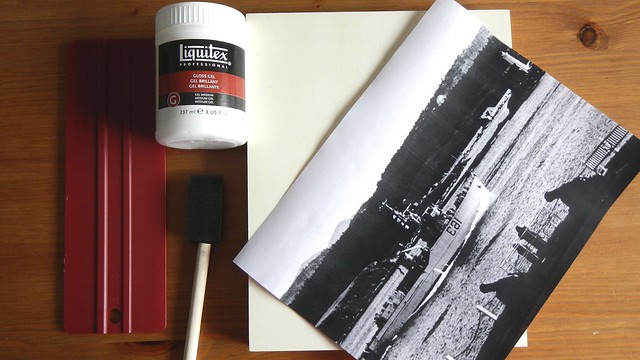 We’ve done this twice before. You’ve probably got it down pat. But I’ll do it for you again, just so you can be confident. Use the sponge brush to smooth a generous amount of gel medium evenly across the surface of the board. Pay close attention to the edges, as they will tend to accumulate less medium (though it enhances the effect in the end if you aren’t looking for perfection). 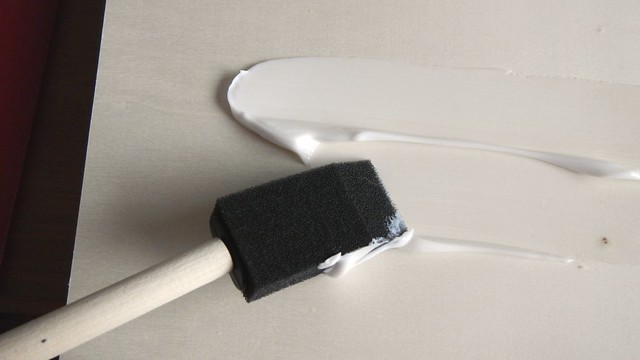 Make sure there aren’t too many big brush marks on the surface. These are fine; you just don’t want huge peaks and valleys of the stuff. 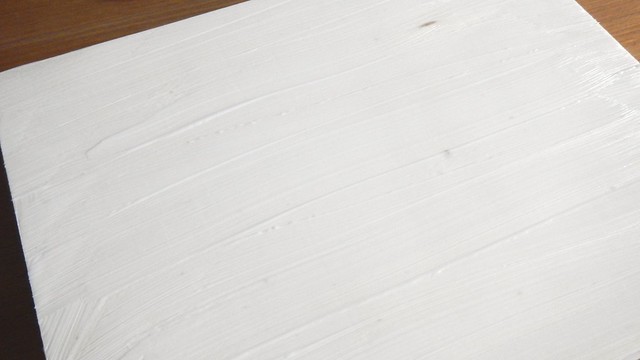 Use your squeegee to flatten the image face-down on top of the gel medium. Set that sucker aside to dry for a couple hours. 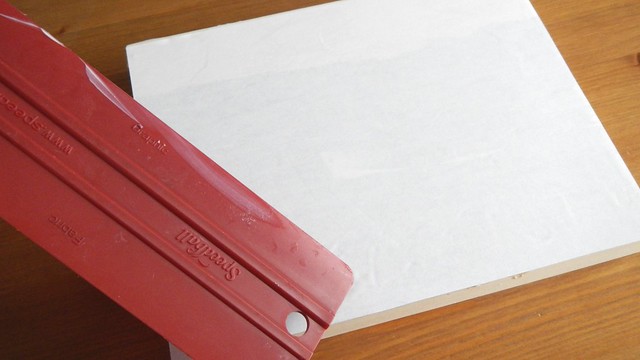 To rest for readiness, peel up one of the corners a bit and see how much toner stayed stuck to the surface. If it’s all still stuck to the paper, you either didn’t use enough gel medium, you used the wrong type of printout, or it’s not dry yet. 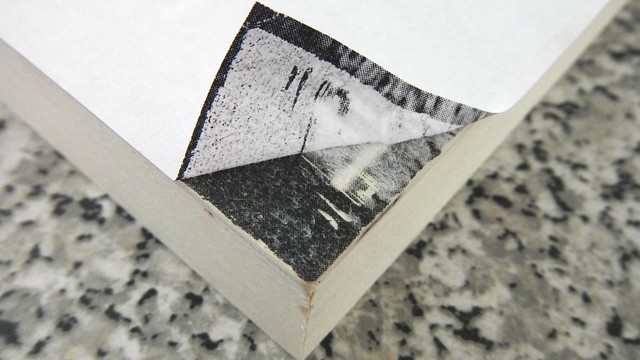 Spray the surface of the board with water and let it sink into the paper. 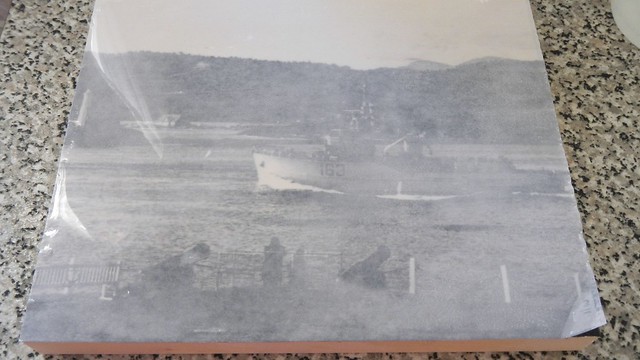 Use your fingers or a soft cloth to rub off the bits of wet paper. You will likely have to let it dry and wet-rub it again a couple times before you get all the white paper off that you want. 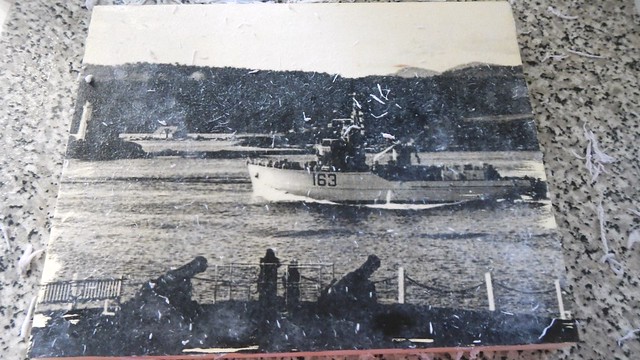 Finally the surface was as smooth as I could get it. 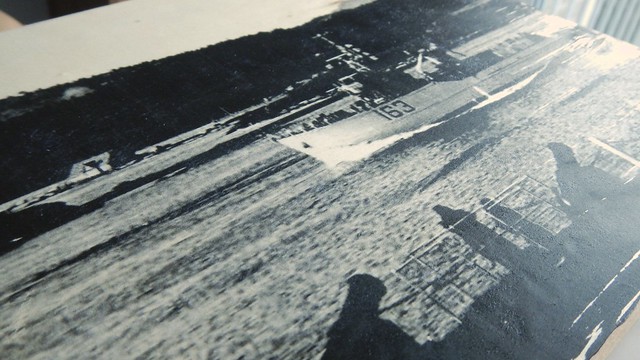 The yellowish tint of the wood underneath added an antique cast to the picture that I quite liked, despite the pixellated nature of the shot. 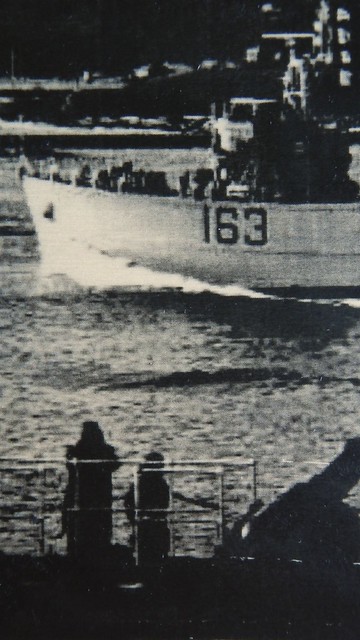 I painted the sides of the board frame a mixed turquoise with craft paint, then sprayed the whole thing once with a satin-finish sealant. 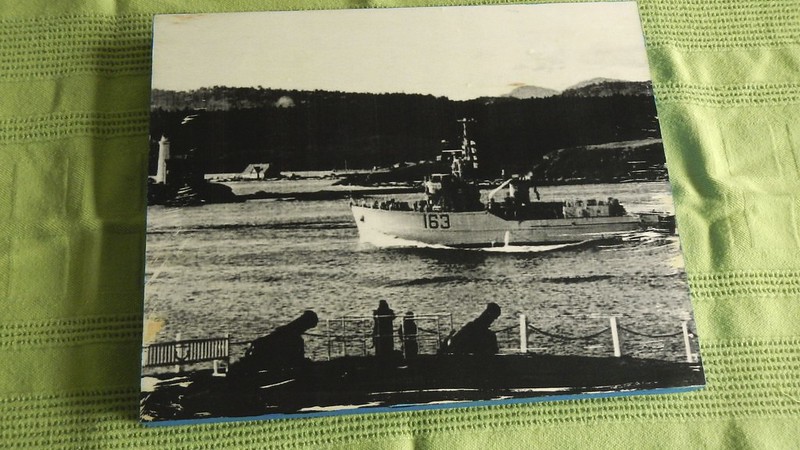 It doesn’t suit my gray walls but I think it will look great on my dad’s wall! 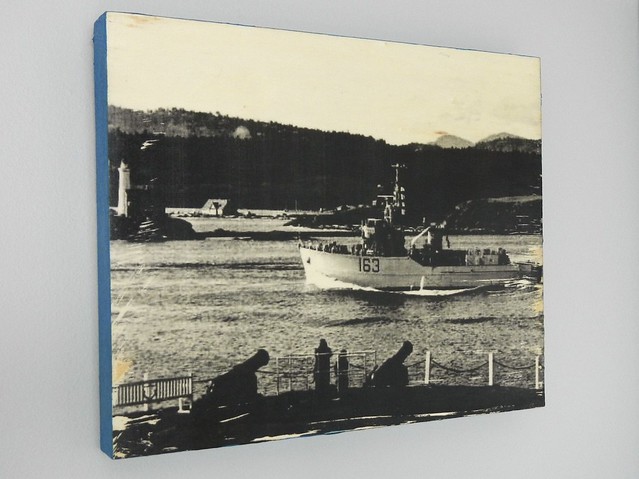