Some big news: last weekend the Pie and I went on a little drive and came back with THIS furry friend. His name is Indiana Jones (named after my idol) and he’s 8 weeks old – well, almost 9 by the time you read this. 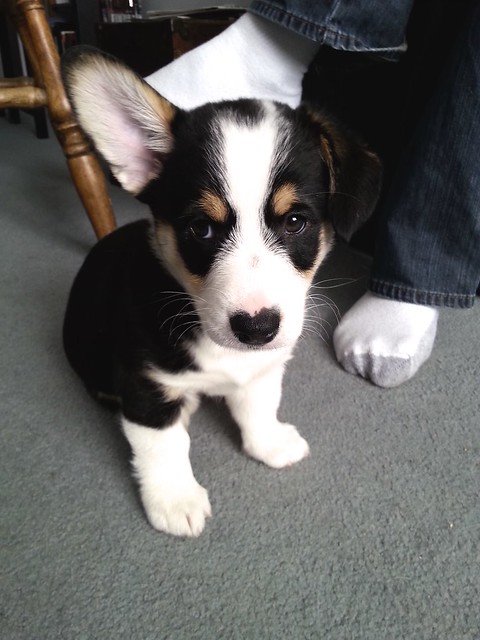 We got him as a companion to Gren, who can be rather jealous of the attention that I give to other small animals and babies. So the plan was to get him a friend to keep him distracted and to divert the amount of spoiling he gets so that we can start thinking about maybe having kids without dealing with the angst of a 40lb furbaby. 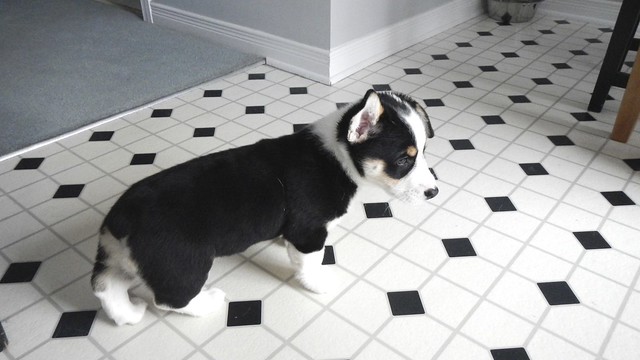 But that’s a way in the distance. This baby corgi is enough to deal with at the moment and needs some training. And he needs to establish a relationship with Gren. I did a lot of research before bringing Indy into the house and I will present here a few tips and tricks I learned from doing my research and from trying it out on the two fiends, interspersed with pretty puppy pictures. Make sure to do your own research when getting a puppy, including whether a puppy is even really suited to your home life and activities. 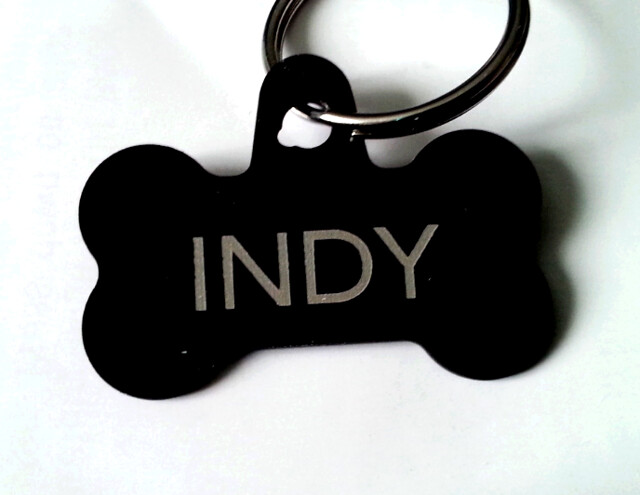 Plan it out: you’re going to need to set up some things when Puppy comes home, and one of those things is going to need to be some kind of crate or pen for Puppy to go into when Dog has had enough of its shenanigans and you don’t want Dog to EAT Puppy.

And if you have a super neurotic dog who is really into his routine like I do, you are going to want to set up the pen a little in advance, just so he can get used to it being there. I moved things around in increments for a few weeks leading up to Indy’s arrival so Gren wouldn’t freak out about too much change at once. One day I set up the pen, and another I rearranged the kitchen to allow for a second set of doggie dishes. 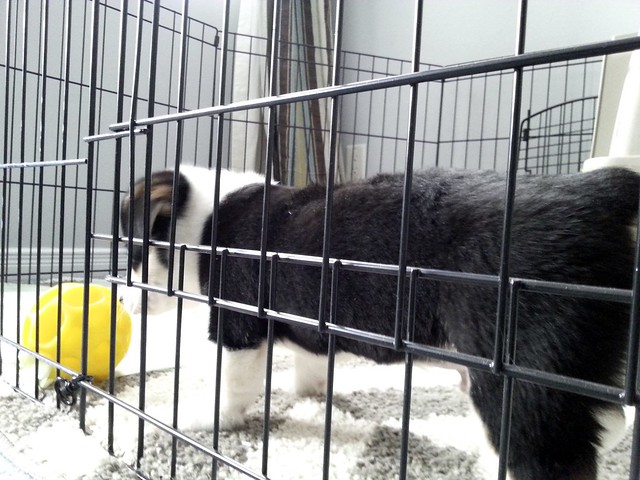 You also want Dog to sleep on a couple blankets in advance, to get the puppy familiar with his scent. This is a good thing to bring with you when you pick Puppy up so he’ll have advance notice of what he’s getting himself into. Not a bad thing to chuck into Puppy’s bed, either.

When you go to pick up Puppy, leave Dog at home. You have enough to deal with. Take Dog for a really really good walk before you leave so he’s nice and calm and tuckered out for when you come back.

Meet and greet: the first introduction between Puppy and Dog is very important because you need to let them establish their own hierarchy without any issues. You may think that Dog will be the boss because he’s oldest and has been there the longest but that might not be the case. And it’s not up to you to figure that out – this is the job of Dog and Puppy to figure it out on their own. Your job is to make it as easy as possible.

When you arrive home with Puppy, don’t go inside. Put Puppy on a leash (even if he’s not really all that leash-trained at the moment) and take him down the block or to the park. Have a friend or family member get Dog, put him on a leash, and meet you at the park. This is neutral territory.

DO NOT. Just DON’T introduce Puppy to dog by holding Puppy and bringing him close to Dog. This puts Puppy on a different physical level than Dog and can make them both very uncomfortable as Puppy will feel vulnerable not being in control of getting away if necessary and Dog will feel that you have elevated Puppy to a different status.

Make sure both Puppy and Dog are firmly on the ground when they meet for the first time. Keep hold of both their leashes so you can pull them apart if necessary, but don’t pick Puppy up if you can at all avoid it.

Now that they’ve had a chance to sniff, take them for a walk. It doesn’t have to be a long one (Puppy will likely not have the stamina of Dog nor the leash training). This will just give them a chance to get used to each other still on neutral territory but also in doing a normal daily activity.

Bringing home baby: when it’s time to come home, make sure that Dog gets to go through the door first, before Puppy. This reinforces to Dog that you are aware of his place in the household and you are not replacing him with Puppy. 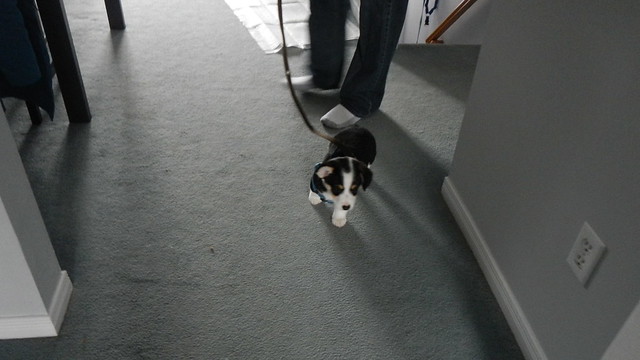 In the house, you can take Dog off the leash and let him go and do whatever it is that he wants to. Chances are he’s going to follow you around because Puppy is a new thing. Keep Puppy on the leash and slowly walk Puppy from room to room, letting him sniff around a bit but not letting him go everywhere. Keeping him on the leash establishes boundaries for Puppy, so that he knows that this is your house, not his, and that he can’t just go anywhere he wants and pee on anything he wants.

Still on leash, walk Puppy to his water bowl (for the first bit, keep food and water bowls separate between Dog and Puppy to avoid fights), and show him places that he can pee (like the backyard or puppy pee pads).  Show him the place where he will be sleeping and introduce him to his toys. 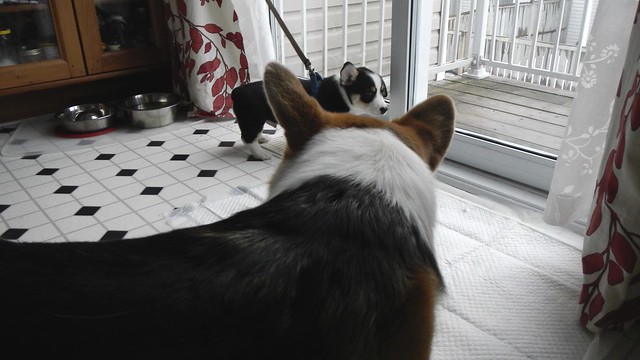 Once you’ve done the tour, you can take Puppy off leash and see what he will do in the territory that you have allowed. 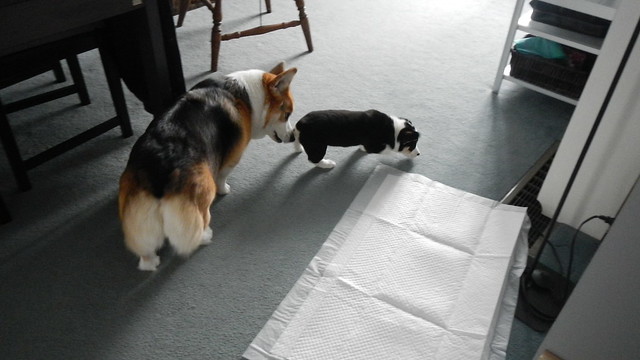 Keep an eye on Dog to make sure he’s not getting too stressed out by Puppy. If he starts panting and his eyes go wide he’s getting anxious. If he starts growling and showing his teeth to Puppy you should put Puppy away in his place for now.

A little bit of tension is expected and allowed if Dog is to establish a relationship with Puppy, but you don’t want full-scale hostility that could damage either animal in the long term. You know your Dog enough to know when he’s had enough and you need to respect his boundaries in that way by putting Puppy away for a while until they’re both calm again.

In the days to come: don’t under any circumstances leave Dog and Puppy alone together for several weeks, until their relationship is firmly established. If you aren’t there to break up potential fights then who knows what might happen? Keep Puppy in a separate area from Dog when you are not around to supervise.

Show some respect: remember that Dog was there first and until Puppy arrived he thought he was the only one in the world for you. When this fuzzy interloper comes around and everyone falls all over themselves to smoosh him, Dog can feel jealous, and like he’s being replaced. This can result in tension and aggression towards Puppy. So until they sort their stuff out, make sure to give Dog preference in all things. If you’re petting Puppy and Dog comes up and pushes Puppy out of the way so he can get petted, listen to Dog. 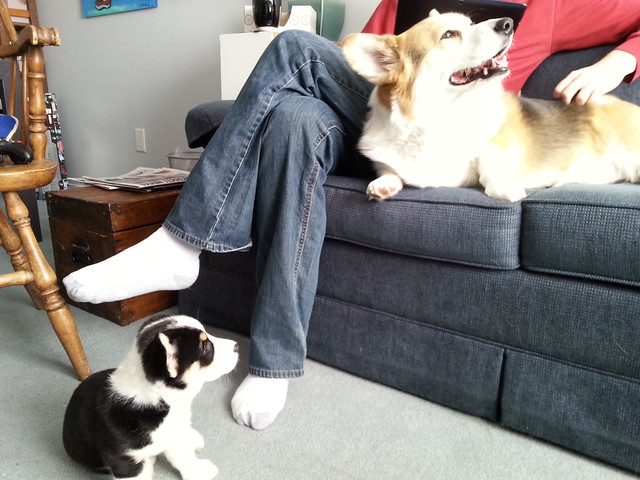 Give him the attention he needs to show him that you haven’t forsaken him. Keep letting him eat first, go through doors first, whatever needs to be done, until the two of them figure out who goes where in the family hierarchy. 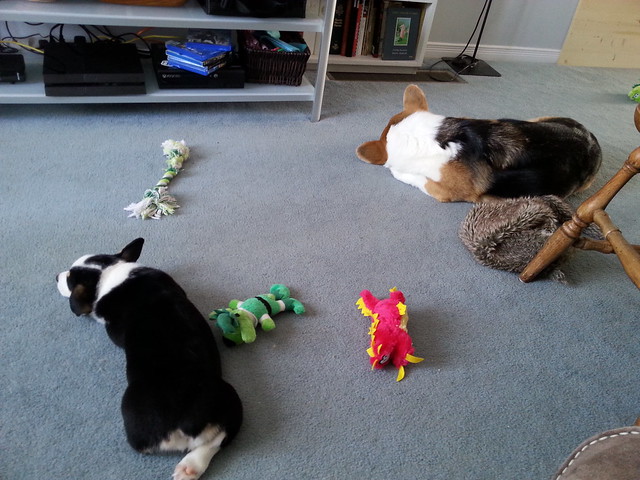 We’ve got an uneasy truce after the first few days. Gren is constantly checking to see where Indy is, and he gets worried when Indy cries. But he also doesn’t like it when we pick Indy up to bring him up and down our stairs (small corgis are not allowed to jump until they get a bit bigger), and after 7PM he turns into a grumpy old man who wants nothing to do with the pup he was playing with just a moment before and will snap at him if he gets too close. 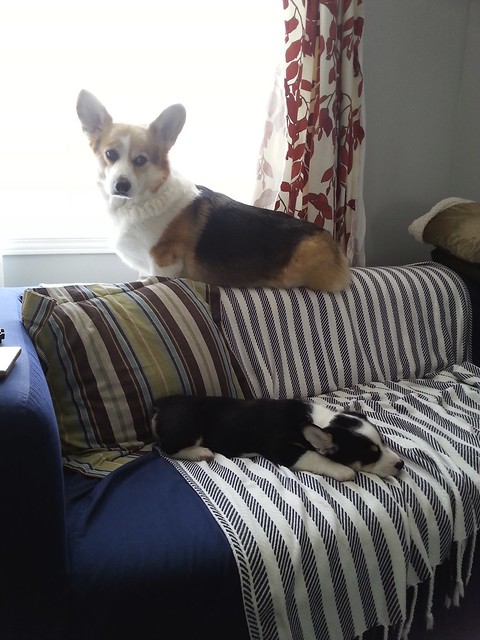 It’s a work in progress, but progress is being made!

Gren has been living a chaotic life these past few weeks, adjusting to new people, new places, and new food.  He’s also been eating a lot of random objects on the side of the road, and that can wreak havoc with a puppy’s digestive system.

If your dog has a bit of a traveler’s gut, diarrhea, or is constipated, there is a quick and easy solution, and I will let you in on the secret.

I’m serious.  It has all this lovely fibre in it to help ease a dog’s digestion, without the sugar of your regular fruits.  I’m sure it works on people as well.

You can give your dog up to a tablespoon of pumpkin purée a day.  Just plop it in the dog’s food and all will be well.  I give Gren a teaspoon in the morning and one at night and he’s good to go.

I also add a teaspoon each time of plain yogurt, to make sure his little tummy has all the good bacteria in it that it needs.

Make sure when you’re buying pumpkin in a can that you get the plain stuff, not the pumpkin pie filling.  Your dog doesn’t need the spices and the sugar.

And because you probably won’t need to go through a whole can before your dog’s gut is back to normal, you can freeze the pumpkin in individual serving sizes (like I did here in ice-cube trays) for the next time you need them.

My Valentine to you is puppy love ♥.

At the time of this post little Gren is only 6 weeks old and not quite ready to leave his mum, but he’s already cemented himself into our hearts.  Cait’s heart too.  The Pie is jealous that he doesn’t get to meet him until April, but what can you do …

So anyway, in about two weeks a small furry sausage of a corgi will be running around wreaking havoc in our household and I’m sure will be the inspiration for many a blog post to come.