So it’s been almost two weeks since we picked Indy up and brought him home. 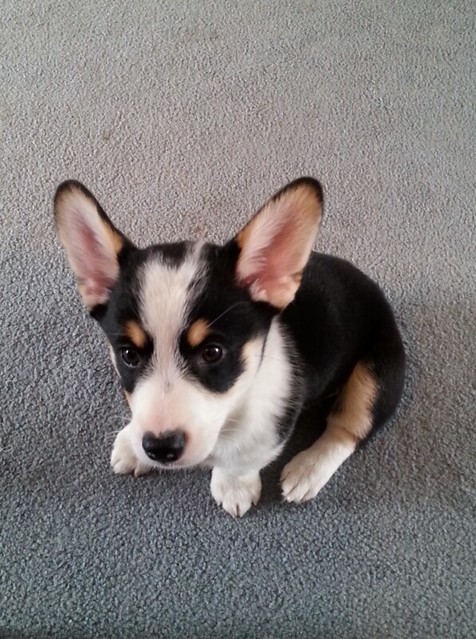 Things are going more or less as expected. When Gren was a puppy I tried to crate train him and it did not go well. Neither of us slept for six months. For Indy we went with the pen approach and it seems to be working so that’s a relief. Puppies can usually go without peeing for as many hours as they are months old. Indy is currently ahead of the game at three hours against his two months of age, so we set our alarms every night and all four of us troop down to go outside in the wee small hours of the night. But then afterwards, Indy goes back to sleep and we can get a bit of rest ourselves. 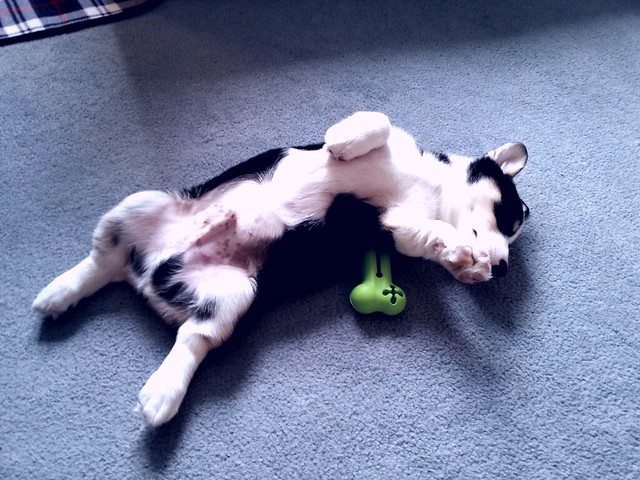 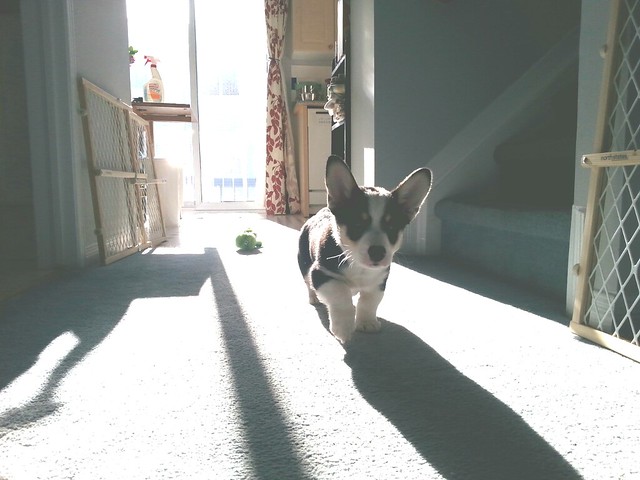 Gren is starting to calm down a bit. Originally, we were letting them play until they got annoyed with each other, because we were relying on Gren to teach Indy boundaries. However, this has led to some scary incidents where Gren goes all snarly with his teeth, and while he hasn’t hurt Indy in any way, we’re not used to seeing it from our cuddly bunny of a dog and it’s a little disturbing. The problem is that Gren weighs forty pounds and is almost four and a half years old. Indy is barely past two months and weighs about six and a half pounds. So when they’re playing, Indy tends to get squashed a bit more than he likes, and because he’s naturally more dominant than Gren, he gets annoyed. So when Indy is annoyed (which seems to be often), he starts growling and barking and going after Gren’s face. Eventually Gren can’t tolerate this anymore and he snaps and goes into scary mode. Gren, my beautiful momma’s boy of a sook, has even growled and snapped at me from the stress and that’s no good. Then we have to go through the rigmarole of calming them both down and separating them, which neither likes. 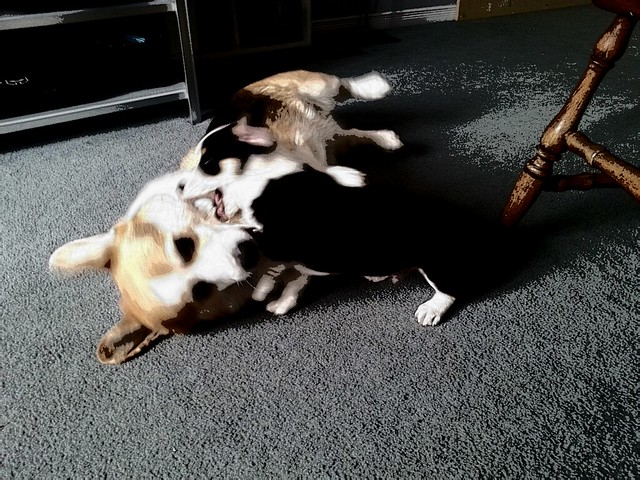 Last week we were separating them by gating Indy into the kitchen, which gave him room to move around but separated him from the hub of activity in the house, which is the living room. It also made Gren anxious because Indy was too far away and plus the kitchen is where the magic happens. 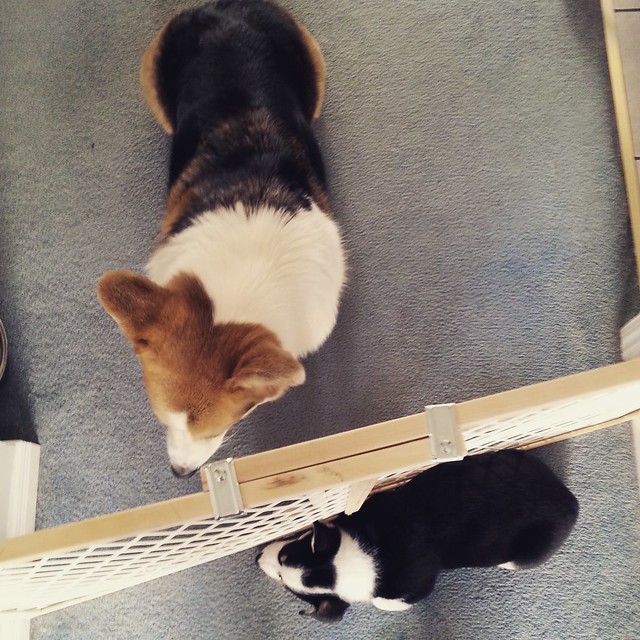 So we got a new, taller pen, similar to the one in our bedroom, and we moved the dining room table and set it up in the living room. Now Gren and Indy can be near each other but not in each other’s space and I think both of them really like that. 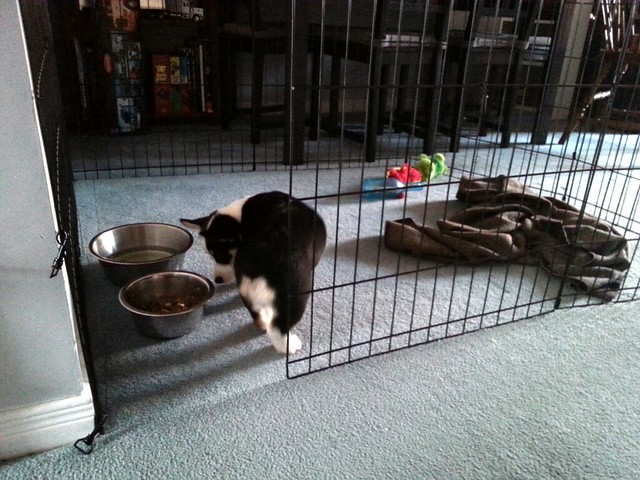 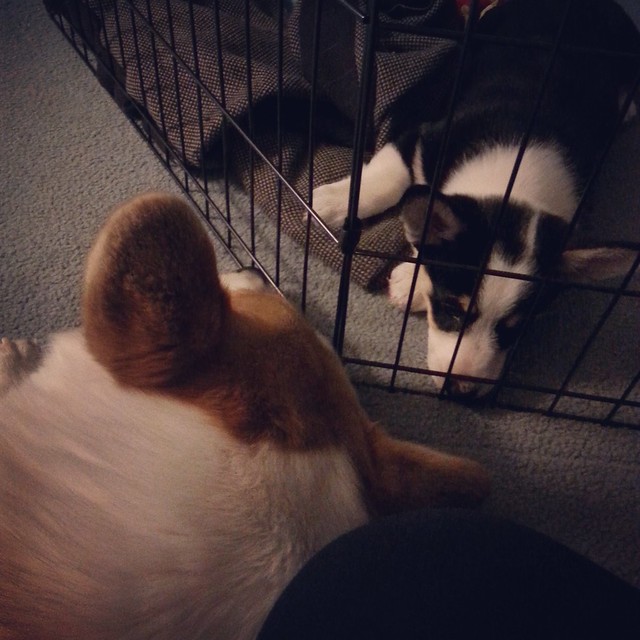 We’ve started to incorporate walks into Indy’s routine, as he’s surprisingly adept with leash walking. The Pie will take him around the block a couple times while Gren and I go for a longer walk, and then we meet up at the end and go around the block a couple of times together. Not only does the walk tire each dog out but walking together gives them an opportunity to be together while doing an activity that doesn’t involve eating or playing. 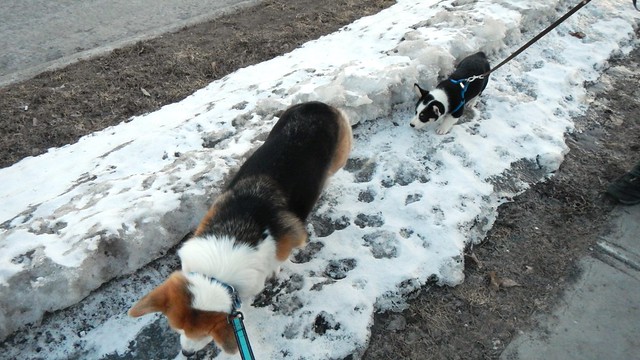 We are also trying to teach them that when they are together they don’t HAVE to be playing all the time. They can just be enjoying pets and cuddles or playing with their toys separately. We have separate toys for Gren and Indy, to avoid any jealousy on that front as well. Gren has never been particularly territorial about his toys before, but usually he shares them with dogs who then go away again. If Indy takes his toys here and we let him it makes Gren feel like he’s being replaced and he doesn’t like it. 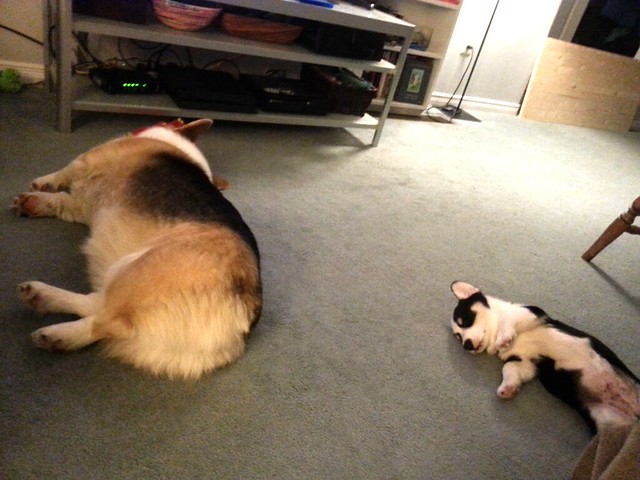 Every time we encounter a setback, like Indy has an accident in the house (at least he does it in the same spot every time) or Gren snaps at Indy and we have to pull them apart, we have to remind ourselves to stay calm and remember that it’s only been a short while. These things take time, and the progress we have made in this short an amount of time has been very impressive. So things are going well, I think. Stay tuned! 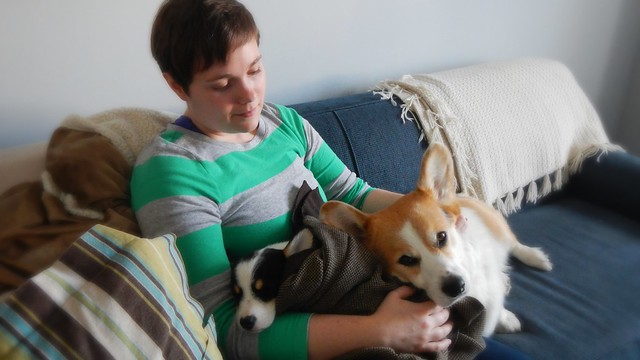