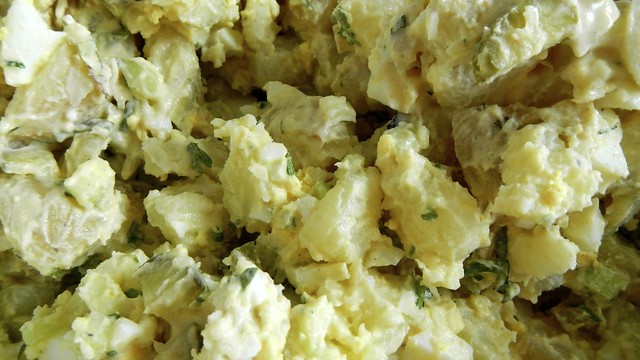 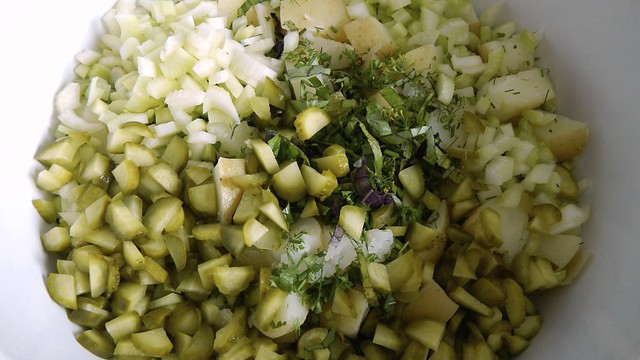 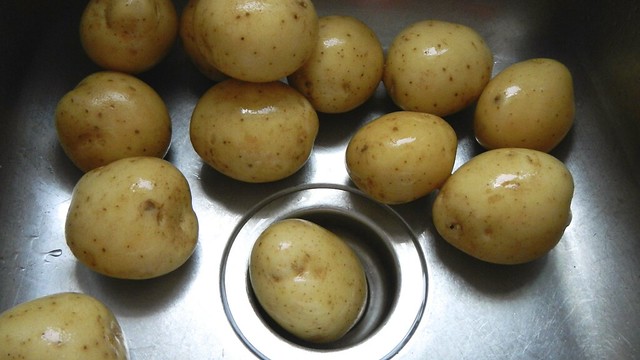 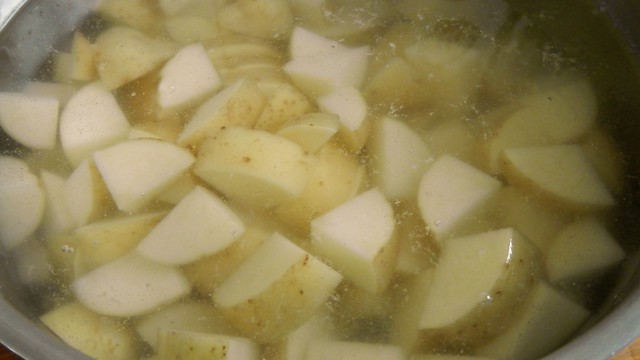 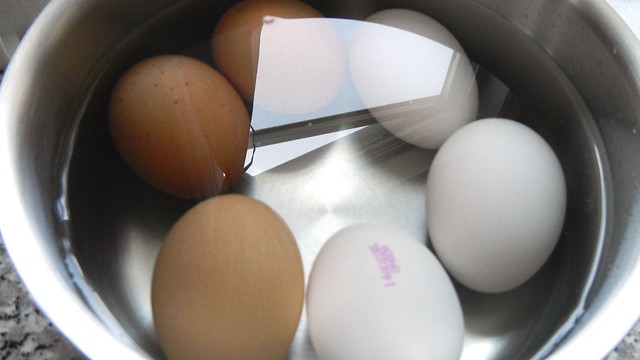 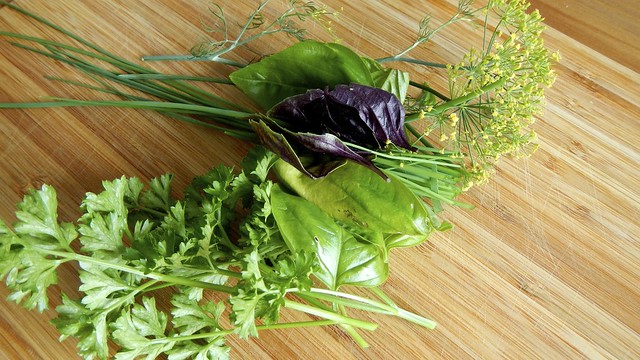 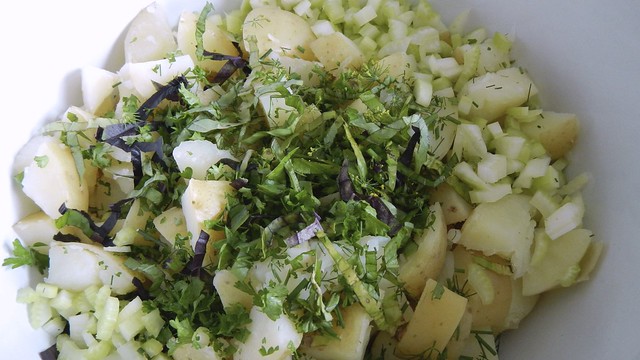 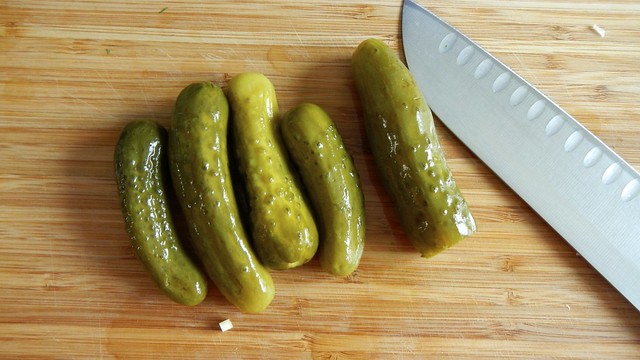 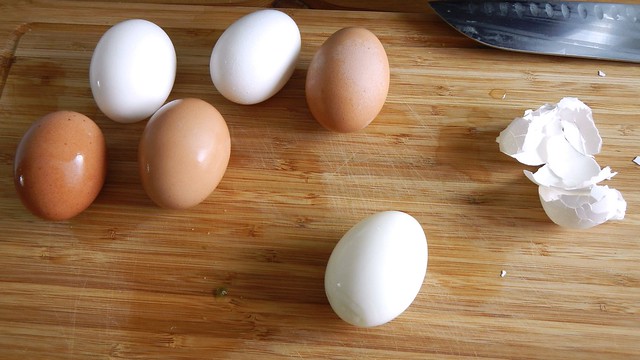 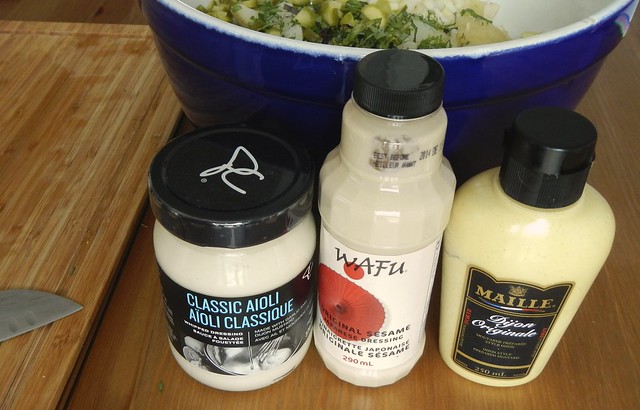 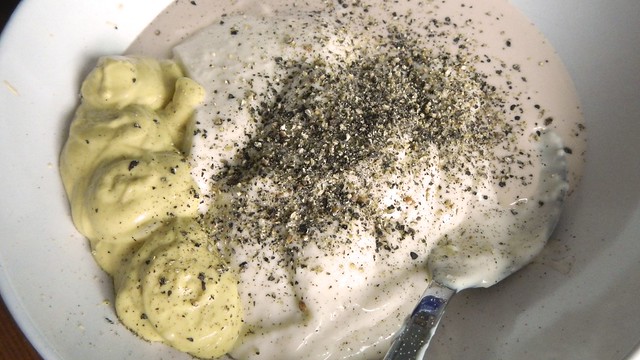 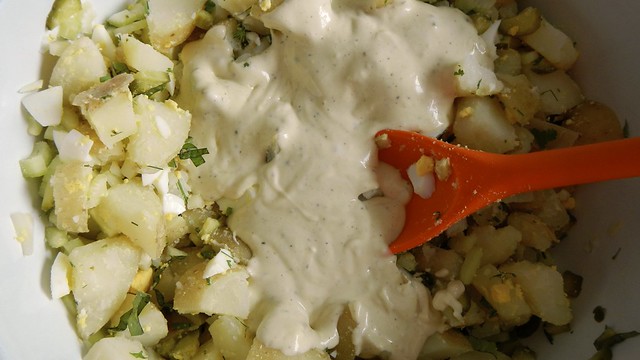 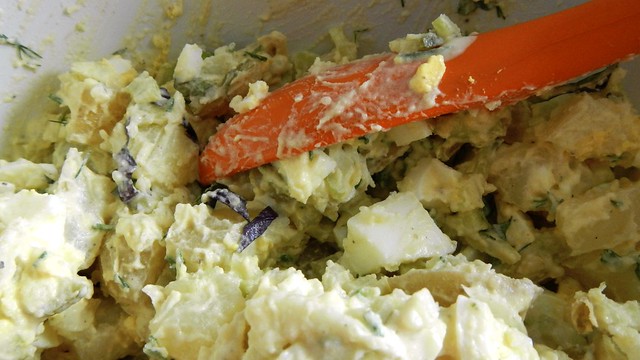 One day, way back in December, it was brisk and sunny in St. John’s, and then by the afternoon it looked like this:

Fortunately, a few days after that, we had a rare sunny day, where the light poured into my kitchen even into the afternoon (which, considering my windows face north and east, is amazing).

But BAM.  It was that alluvasudden-it’s-winter phenomenon that seems to happen to many Canadian cities.  I was preparing for a pre-holiday potluck and Kª had just informed me (online from tropical Kansas) that Kº had gotten a job in Russia and that they were moving back there in February, and taking Il Principe and the Incredibly Little Hulk with them (not like they would have left them behind, of course).

Having recently read Sasha’s recipe for Russian Potato Salad (or Olivier Salad) over at Global Table Adventure, I thought that it would be fitting for me to make this easy and cheerful salad for our holiday potluck (and I definitely left a substantial chunk of it with Kº when we left for Ottawa).  So this one’s for you, the Russians-who-formerly-lived-downstairs.  Прощайте и удачи.  Have a safe trip!

Plop 4 large eggs into a pot of water, bring that to boil, then turn the heat off and let that sit with the lid on for about 20 minutes.  In another pot, boil up 3 large carrots and 2lbs potatoes.  Boil them until they’re just tender, not mushy.  Rinse them with cold water to cool them down and then peel them.  It may sound tricky, but it’s actually easier.

Then, we chop. Gren helped/cleaned the floor.

Chop up those eggs quite fine.

As well as 3-4 large dill pickles.  Make those into tiny cubes.

In fact, cube everything, your potatoes, your carrots, as well as 1lb cooked ham.  You’ll also want about 2 cups peas (I used frozen), but you don’t need to chop those.  That would end badly.  I also chopped up those green onions I’d been saving.

Mix all that cheery goodness together and season with salt and pepper.

Then you slather on the mayonnaise, about 1 cup to 1 1/2 cups, depending on your preference.  Only dress the salad you plan to eat, as it will get soggy after a while.

This recipe comes from Potato Salad: 65 Recipes from Classic to Cool.  At one point in this book the authors note that potato salad is as American as apple pie.  Thankfully they leave it at that.  Because I am a sports researcher, it drives me absolutely bonkers when I read somewhere that something is “as American as baseball and apple pie.”  In case you didn’t know (and on the slight off-chance that you actually care), baseball actually originated in Canada.  So while it may be the great American pastime (and gridiron football will start hemming and hawing to be noticed at this point), it ain’t American.

I don’t, on the other hand, know anything about the origins of potato salad.  Sorry ’bout that.  I’m going to go out on a limb and guess that potato salad came from wherever it is that potatoes are indigenous.

Okay enough blather.  You want a recipe.  Of course I left the recipe book at home and I’m at school so I’m guessing on the measurements from my photographs.  It’s not like potato salad is an exact science.

Chop the potatoes up into halves or quarters or thirds (whatever works for the size of your potato) and plop those in a bowl.

Take 1 stalk celery, with all the objectionable bits cut off, and chop that up for the bowl.

Then take a TINY onion.  You can see the scale.  I have tiny munchkin/carnie hands, so objects in photo are smaller than they appear.

Because the recipe calls for only 1/4 cup chopped onion and that’s a very small amount.    Stick that in the bowl as well.

You’re going to need 1/2 cup green peas.  I thawed these from the freezer.  So much for market fresh!

You’re going to need 1 hardboiled egg, as well.  I don’t care how you get it, but once you have it, peel it and chop it up and add the bits to the bowl.

Chop up some fresh herbs, about 1 tablespoon chives and 2 tablespoons parsley.

How I love chopping herbs!  Well except thyme.  That sucker’s a real pain.

So that’s all the bits, in the bowl.  Except the herbs.

Now the dressing is something unnecessarily confabulated, like 1/2 cup sour cream, 2 tablespoons mayonnaise, 1 tablespoon greek yogurt, 2 teaspoons lemon juice, and 1/2 teaspoon each salt and pepper.  Or whatever the stuff in that wee bowl looks like to you.

Now, toss everything together and store in an airtight container in the fridge for a few hours   (or overnight) to let the flavours blend.  Then eat your face off!

We had a Valentine’s cold-plate potluck at work on Tuesday and I was assigned to make a potato-egg salad.  And as the best one out there belongs to the Pioneer Woman, that’s the one I made, with some modifications of course.  Ever since the grocery store down the block closed I have found myself without certain key ingredients at unfortunate times.  Today, it was green onions.  So I improvised.

Wash and cube about 5lbs potatoes.  I used two different kinds, for the colour.  You can peel them if you want, but I like the texture and flavour of potato skins so I left them in.  Plop those in a large pot and boil them until they’re tender and mashable.

You’re also going to want to hard boil 4 eggs, through whatever method you use.  When they’re ready, peel them up.  Mine were pretty recalcitrant and refused to be peeled in a civilized manner.  The shells would not come off without a fight.

I punished them through the vigor of my chopping (even if your eggs are well-behaved, you’ll still want to chop them up).

Finely chop as well half an onion (or 5 green onions).

And a handful of sweet pickles.  You can use dills, if you prefer, but I think it’s better with the sweet ones.

In a bowl, mix together about 1 1/2 cups mayonnaise and 4 tablespoons mustard (I used a stone-ground dijon here, but you can use what you like).

In a wee bowl, arrange about 1/2 teaspoon paprika and 1/2 teaspoon kosher salt.  I also added 2 tablespoons dried chives, for colour, as I was missing the green onions.

I also had another wee dish of dried dill, for garnish.

So here is my mis en place.

Mash your boiled potatoes.  I really like the colour combination of the white and yellow ones here.

Stir in your mayo/mustard mix.

Add in your eggs, onions, pickles, paprika, salt, and optional chives.  Make sure to scrape the bottom so you get everything mixed in evenly.

Plop it in a serving dish.  The best part about this potato salad is it’s good hot, warm, and cold.

Garnish with a sprinkle of paprika and some dill, or whatever floats your boat.  It’s not elegant, but it’s good!