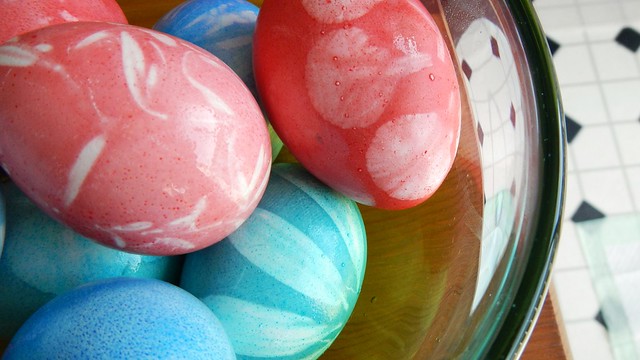 After our success with the Tie-Dyed Easter Eggs last year, Cait and I decided to make it a tradition, just like our Christmas baking, and do it again this year. Obviously, we would do something different  (the tricky thing about this blog is I can’t ever really do the same thing twice). 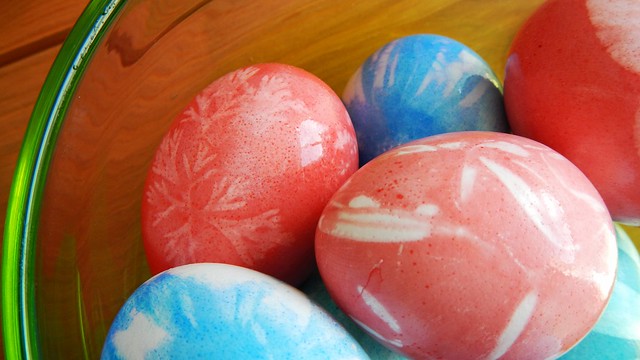 So after looking at this post and this post on dyeing eggs with natural dyes and using plants to make impressions on them, I knew this was something we needed to try – FOR SCIENCE. However, with Indy now part of the family and requiring our 100% attention at all times to avoid him being eaten by Gren, I knew we didn’t have time to set up natural dyes for the eggs. We would do that next year. 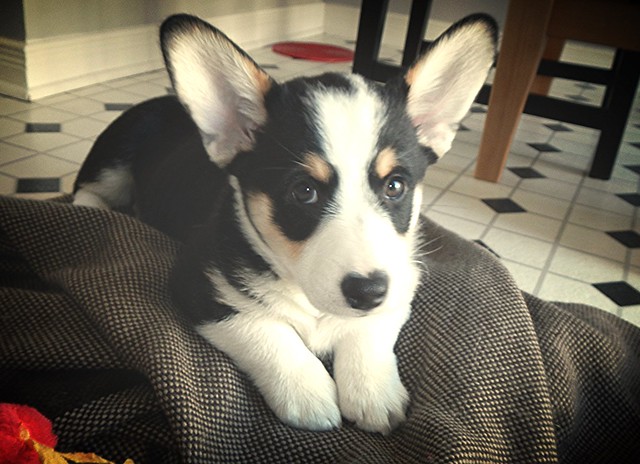 I had some Ukrainian style pysanky dye that I purchased when Cait and I had a different plan for science-y Easter eggs (maybe we’ll do that another year as well), so I figured we’d use that instead. 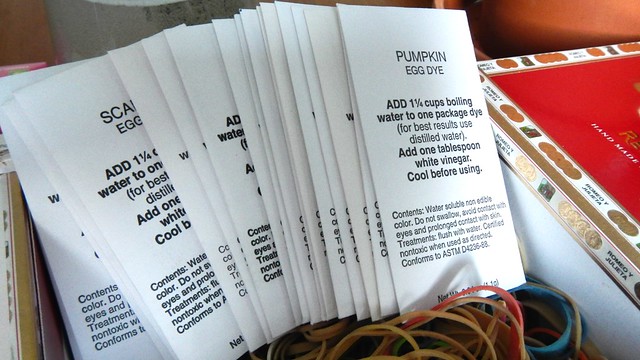 So all you need for this is whatever dye you’re going to use, some rubber bands (again, leftover from the Tie-Dye incident), some cheap or old pantyhose (the Pie bought this for me at the Dollarama and said it was an odd experience), and some flowers or plants. The plants that work the best are really floppy ones that are thin and pliable. 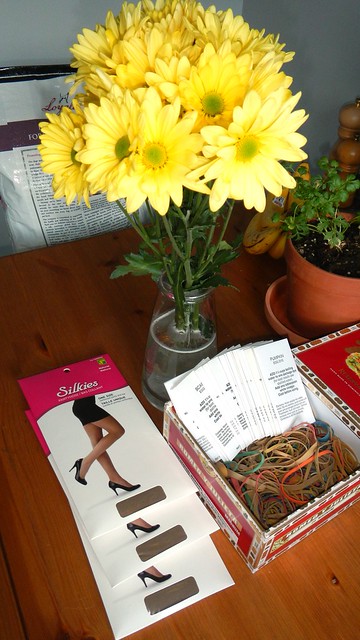 Use scissors to remove the legs from the pantyhose and cut them into small sections large enough to wrap around whatever eggs you’re using. 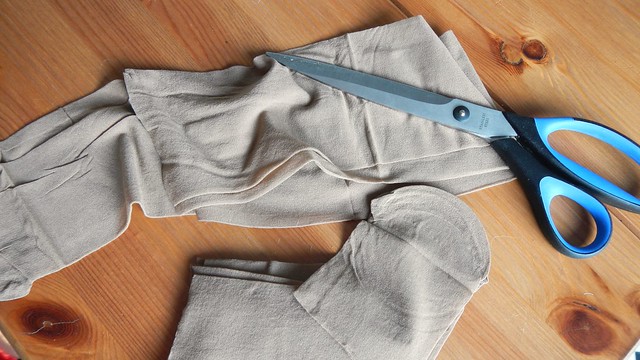 You can either leave them as a tube or slice them open – I found it was easier to open them up. 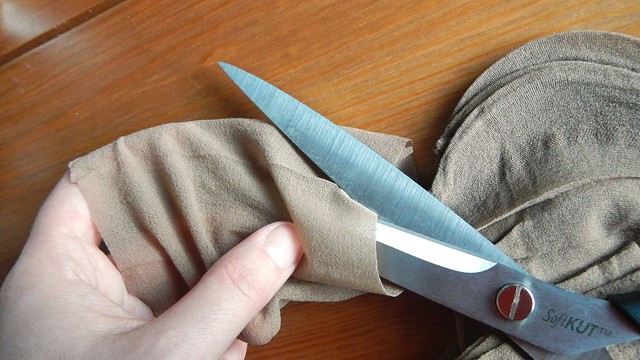 Although I left the toes as-is. 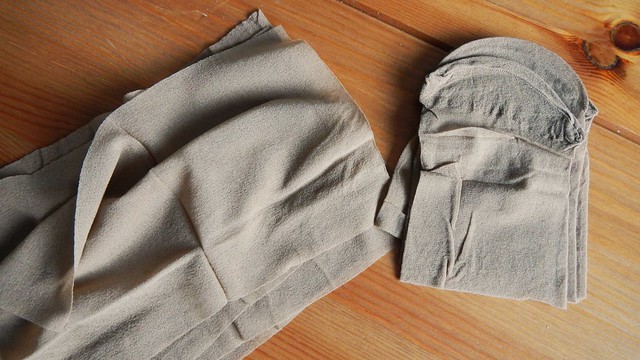 Oh and you need eggs, did I mention that? We’re going to hard-boil them in advance. Don’t worry if your eggs have those pink date stamps on them — that dye will come off in the boiling process. 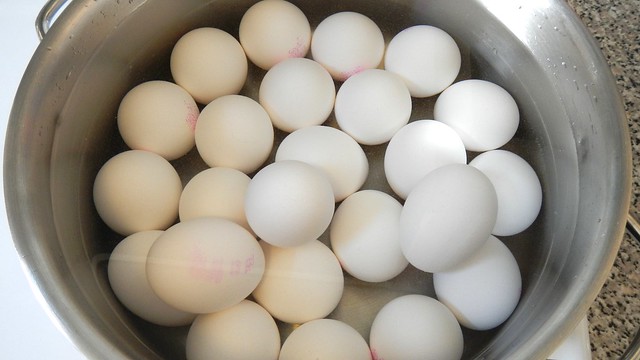 Set all your eggs in a pot of water and bring it to a boil, then turn off the heat and remove the pot from the burner and leave it with the lid on for about twenty minutes. 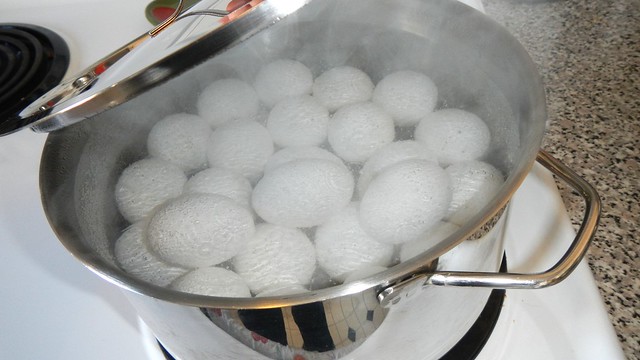 Now you can work on your dye. Cait and I picked out four colours to use. 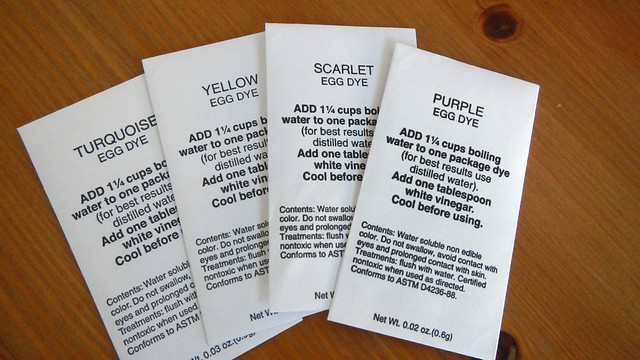 I followed the instructions on the packet, using distilled water (leftover from our soap extravaganza) and vinegar to prepare my dyes. 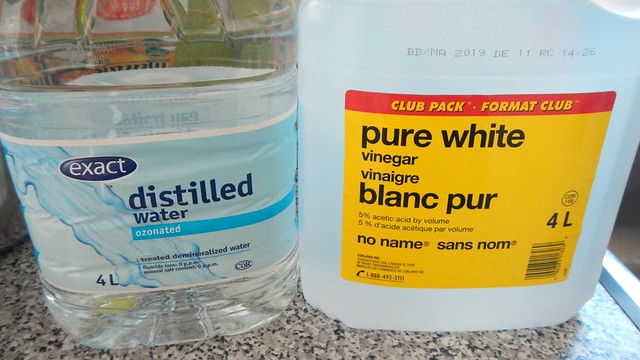 Then I had to let them cool. And just a warning, powdered dye gets everywhere, as I learned during my Tintex experiment. 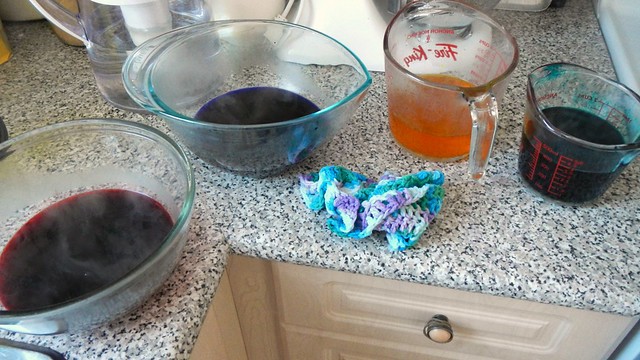 Then all you need to do is take a piece of flower or leaf and put it on your egg. This is some cilantro that I’m growing on the kitchen table. 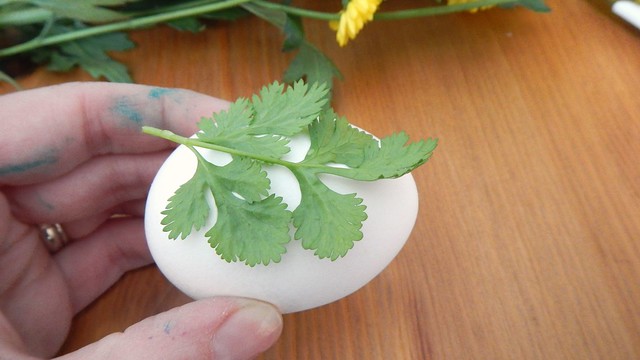 If you dip the leaf in water first before you smooth it on it will stick better. Cait and I also suspect that the thin layer of water between the leaf and the egg provides a bit of surface tension or something science-y that will serve as a barrier for the dye later on. 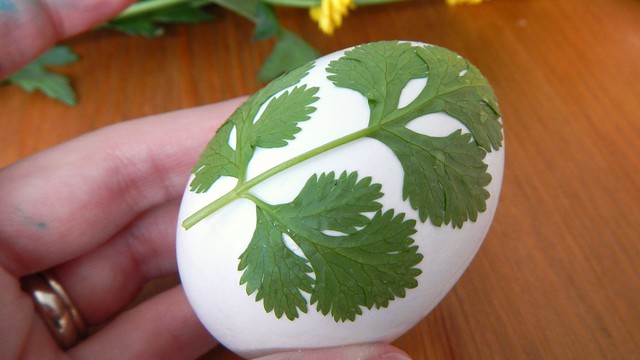 Then all you need to do is wrap it tightly in a piece of the pantyhose. 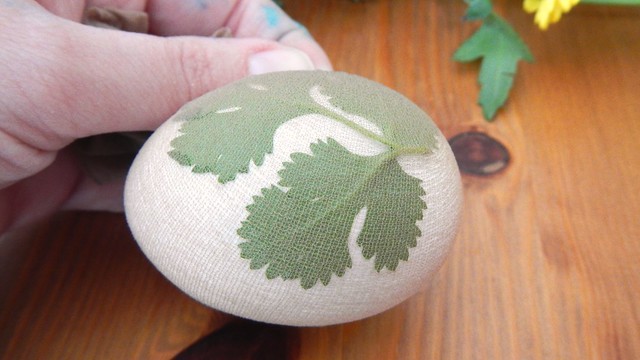 The tighter you wrap it the wider the spaces between the strands of nylon and the easier it will be for the dye to get through – also it will press the plant closer to the surface of the egg and be a better dye blocker. 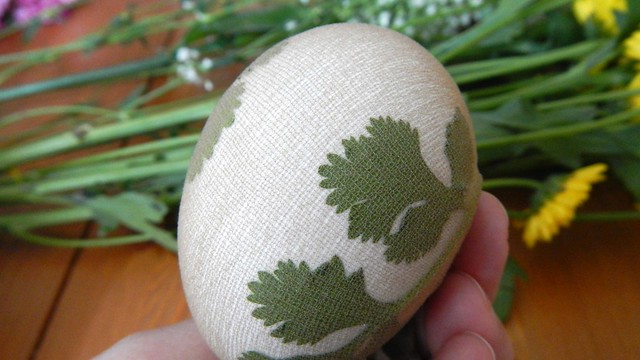 Secure the ends with a rubber band. 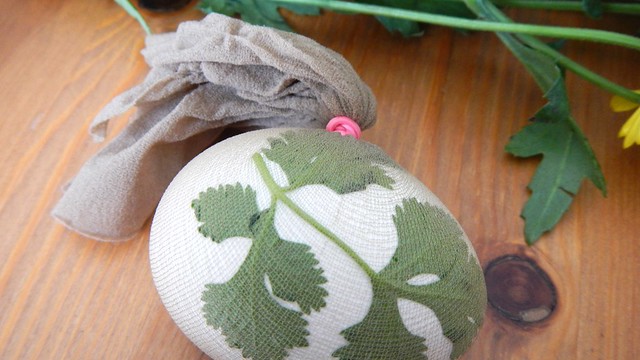 We tried it with some bigger flowers. 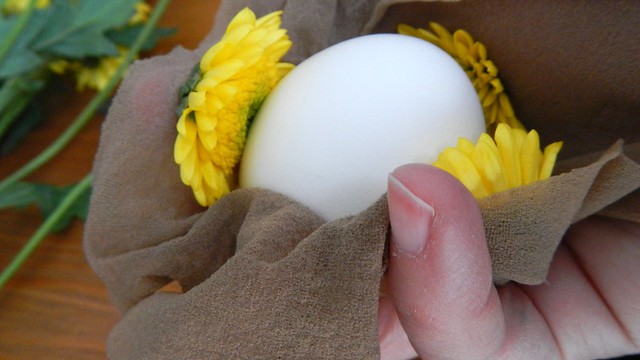 And some wee small flowers. 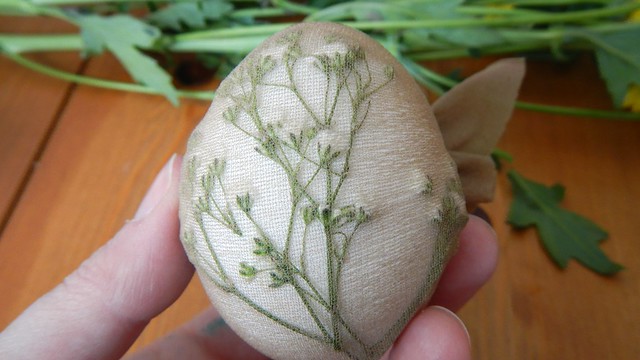 And just the petals of other flowers. 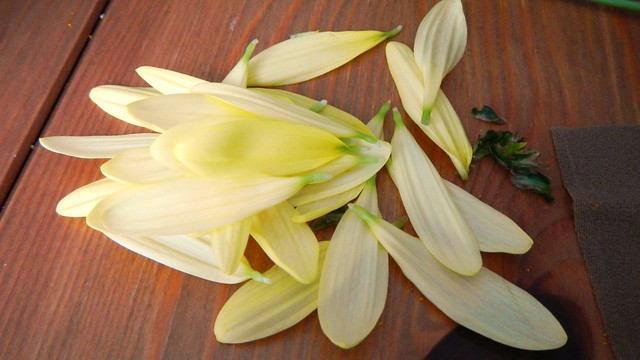 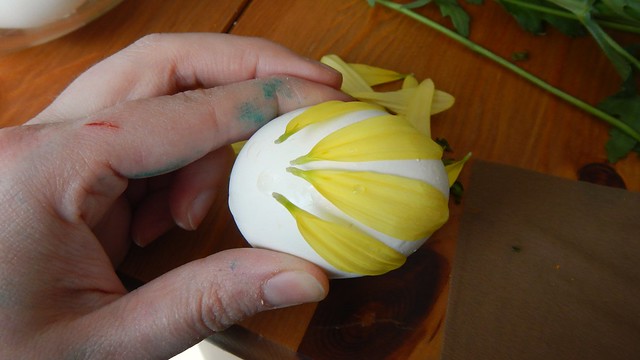 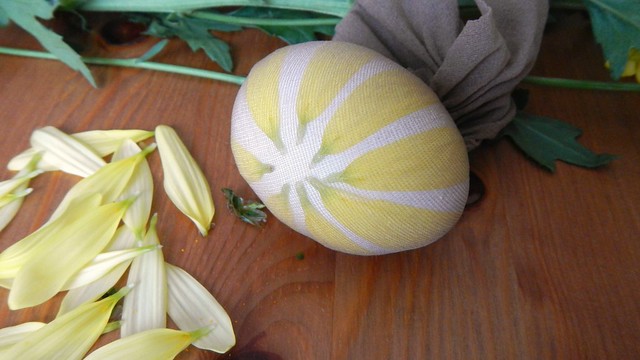 This is less easy than they make it look on the internet. 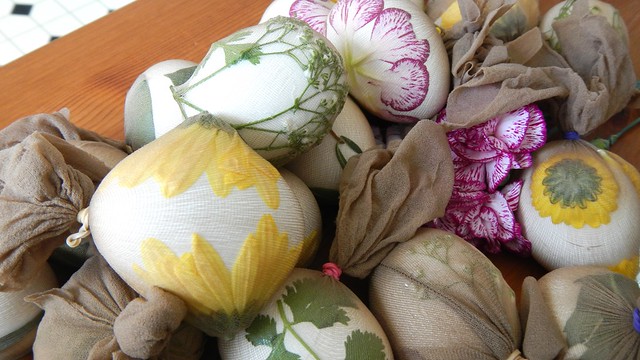 Into the dye. Leave it for however long you are supposed to according to your dye. 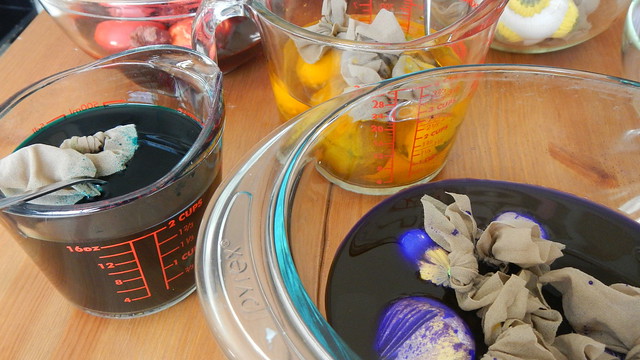 We hauled ours out after a while and gave them a rinse – we probably should have let them dry in situ but we were under a time constraint. 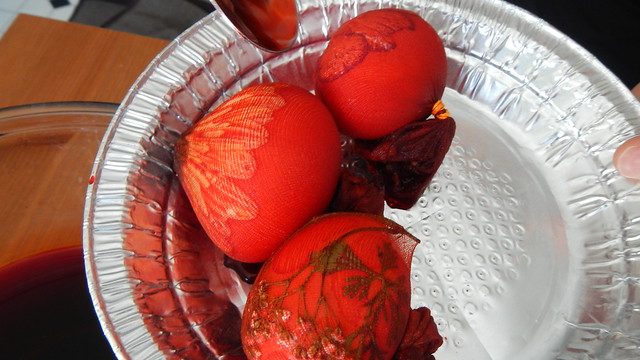 As you can see the ones with the floppy thin plant materials worked the best. The one on top here is a few sprigs of tender rosemary and we were both quite pleased with how that turned out. 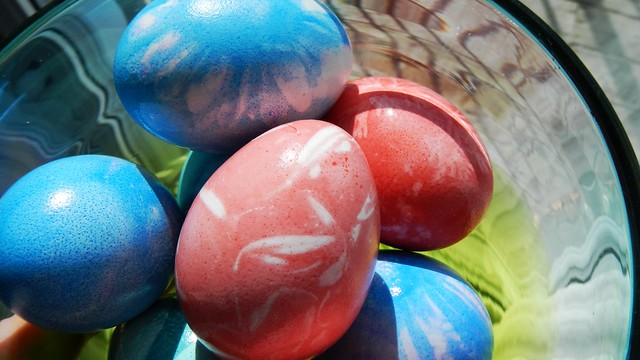 All in all, though, this experiment could have gone better. Part of the issue is that we couldn’t really find any nice slender foliage as Ottawa is still covered in snow. This is definitely an activity better suited for a more southern climate. 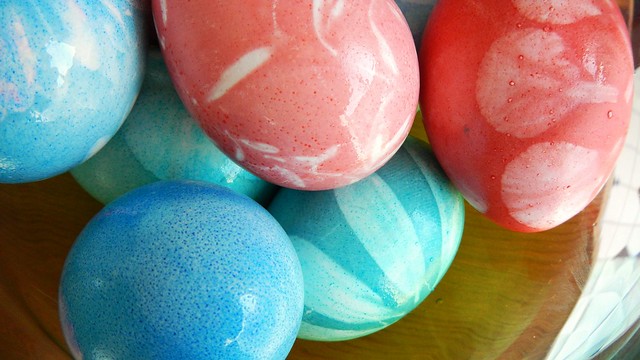 Well, not quite yet.  We had a blizzard last week that set things back a pace or two.  The above photo is one I took last spring around this time.  In fact, all the photos in this post are from my garden last year.

Last spring I had all sorts of plans for my garden.  I was going to create a simplified version of a wildflower garden, and plant things that I could name off the top of my head and that I knew how to care for.  I had all my seeds planted indoors, soaking up the sunshine from the warmth of my kitchen.  I was ready to go.

Things did not work out the way I had hoped, however.  It was a cold spring and we had a last-ditch blizzard in late May.

Most of my seedlings died because I had ignored the frost warnings.  The rest were eaten by slugs.  Even my marigolds, which I planted as slug repellents.  Who knew?

I did have some successes, however, and you can see the results here.

My failures were many, however, so this year I plan to start afresh: no seedlings, just mature plants, and everything will be simple and hardy enough for shallow, rocky, lead-lined soil.

New DIYs as often as I can get them to you, whether you like it or not.
Join 20,075 other followers