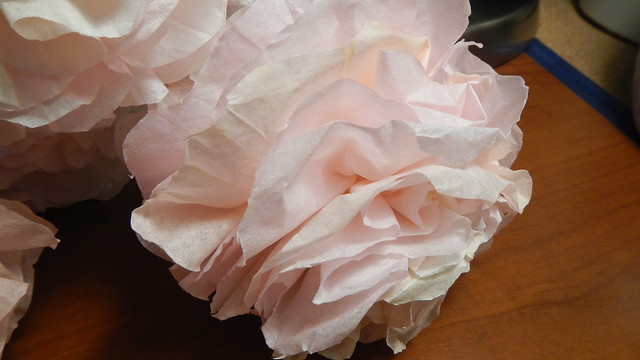 I have an empty space on the bookshelf in my office and because it’s a dark bookshelf in a dark corner I wanted to add a little bit of whimsy that would light up the area – literally. 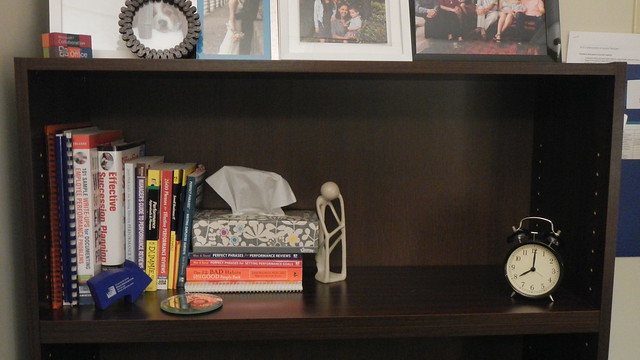 I had all these plastic gems I picked up from the dollar store a few years back, and a conveniently-sized plastic jar into which they could go. 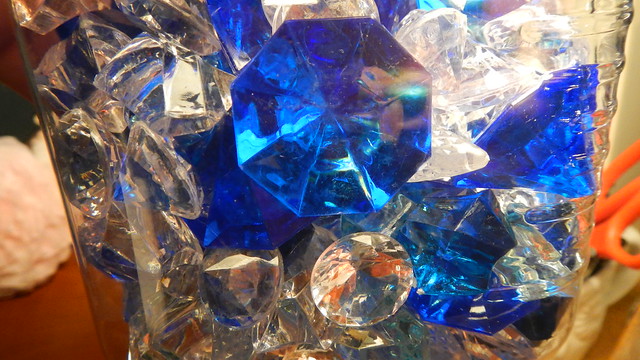 When I poured them in I shoved in a set of battery-powered LEDs as well, for – well, for the purposes of lighting things up. 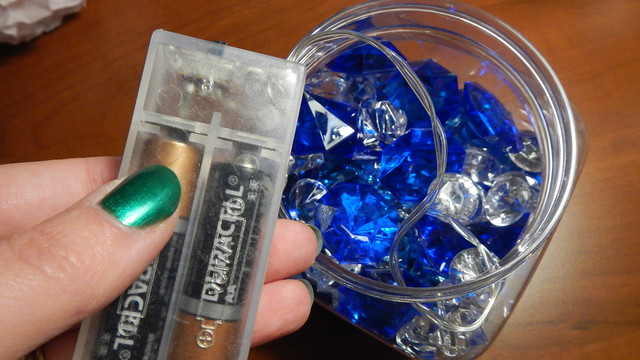 Then I re-created a version of my paper peonies that I made a few years ago. 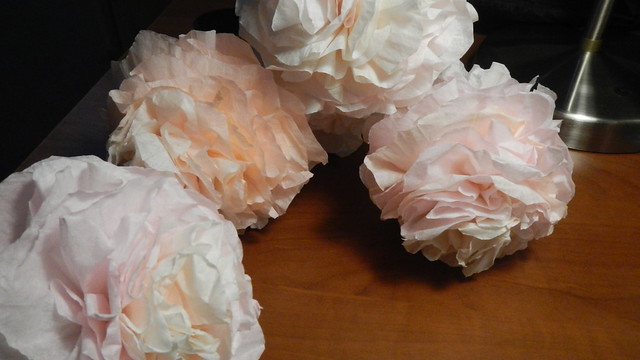 And I stuck them in on top. 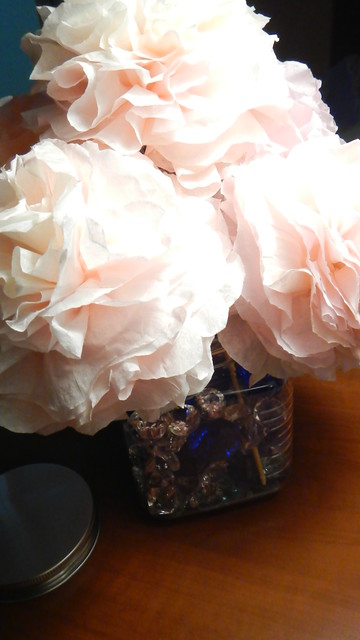 So now I have glowing peonies. In my office.  And I’m okay with that. 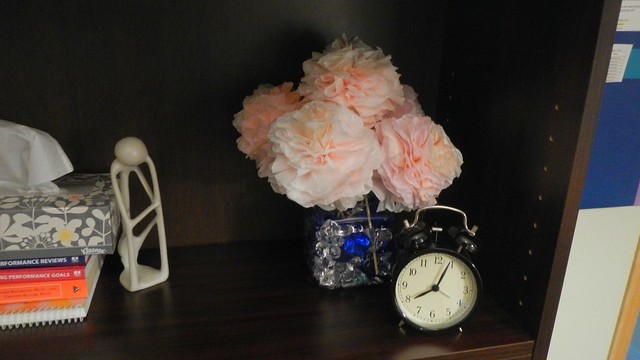 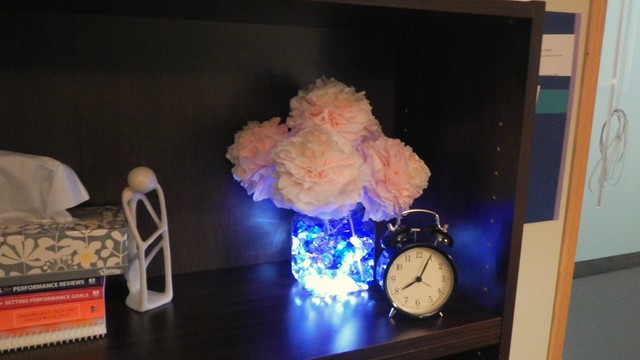 While the weather might be warmer than it was before, and while I pulled these lovely daffodils out of my garden last week …

… my garden still looks like this.  Which means that my peonies haven’t bloomed yet.  If they’re going to bloom at all.  And I like peonies.  They’re one of my favourites.

So I’m going to make my own here.  It’s not that hard.  I found a quick tutorial at Two Shades of Pink and had at it.

Start with a bunch of coffee filters.  I don’t know how many.  A bunch.

And some warm water.  And some food colouring.  Or watercolour paint.

Dissolve some of your paint/dye in the water. This is some Crayola stuff I broke off and stirred in.

I tried this craft paint but it wasn’t water soluble, not really.

Then dip your filters into the coloured water.  You can do a bunch at once. And they don’t need to sit in the water for more than a few seconds.

Experiment with the outer edges.

Versus the inside. Or the whole thing.

Squeeze out the excess dye with your hands.

I totally dyed my hand pink.

Spread out the filters to dry completely.

Mine took a few hours, less when I fully separated the layers and put them in a place with lots of air flow.

This is the full stack next day.

Now, in addition to the filters, you will need scissors, a stapler (with staples), and then some tape or wire (I have floral wire here).

Grab between 6 and 8 of the filters and stack them up.  Flatten them a bit with your hands.

Fold the filters in half, then half again so you have a little cone.

Take your scissors and scallop the rounded edge of the cone — don’t worry about perfection, it’s all good.

Now unfold the thing and ruffle it up a bit.  Pinch that spot at the very centre where you made your folds.

Flip the filters over and you can see what I mean by that pinch.

Staple over that pinched spot to hold things in place.

Now flip it back over and smooth it out a bit.

Pull up the edges of the topmost (innermost) filter and, working from the bottom, squish the filter in on itself, leaving a nice fluffy gathering on top.

Keep going with each successive layer.

Make sure to keep the top nice and fluffy, while still jamming the paper against itself.

Gather up the bottom layer and push it upwards, squeezing into the little handle you’ve created for yourself.

The paper will hold its shape for a short time, but you want to fix it more permanently.  You can use tape around the little nub here or floral wire, which is what I used.

I attached one flower to one end of the wire and another to the bottom.  What am I going to do with it?  I’m getting to that.

Because of the variation in the way I dyed the filters, you can see different colour gradations in the finished flowers.

On this one I put the darker filters in the middle.

This was the resulting bloom.

I used 8 filters per bloom and ended up with 18 flowers finished, which means I had 144 filters dyed.

When I was finished I gathered some of the blossoms that were tied together and I used an additional piece of floral wire to wind their stems together.

And it made two lovely little bouquets of 9 flowers each.

I don’t even want to talk about that horrible plaster job in the background.  The landlord took our chimney away and now I have no place to display my work.

So until I figure out how to compensate for my lack of a fireplace, I’ve put my pseudo peonies flanking my television.  Because I’m classy like that.

By the time you read this I will have already come back from a brief trip with Gren to Ottawa to visit my grandmother.  Before I left, however, I was wracking my brain trying to come up with something creative to give her to let her know I was thinking about her, but something that would appeal to her practical sensibilities and also something that she wouldn’t have to keep around for a long time if she didn’t want to.

And I was doing all that wracking at work in the library.  Yes, sometimes I do slack off.  Only sometimes, though.  I took a lot of the following photos with my phone, in fact.

We have about fifty or so subscriptions to loose-leaf legal volumes, which are legal texts that update probably four or five times a year when legislation changes or when new cases can be used as precedents.  So part of my job is to go through each of these volumes, remove the selected pages that have been updated, and insert the new ones.  It ends up being a lot of paper, in the end.  I save the sheets that have one blank side to make scrap paper notebooks.  But the rest of it, the printed-on-both-sides stuff, ends up in the recycling bin.  Sometimes I can empty that sucker two or three times a day.

After my success with the Fruit by the Foot roses, and after looking at these cute gift toppers, I had an idea (and it also occurred to me that my candy roses would have been better if I’d cut them from spirals in Fruit Roll-Ups instead).  Instead of picking up some real flowers for her, ones that have likely been grown using questionable or unsustainable methods, ones that have been shipped in from a great distance and will likely wilt in a few days, which would require her to take action to get rid of them, why not give her a bouquet of recycled roses?

So I grabbed a handful of sheets out of my recycling bin and started in on this.  Fortunately, because I’m a librarian, I have a lot of scissors and interesting adhesives and things lying around, as well as a big desk to work with.  For this job, though, you just need some relatively thin sheets of paper, any kind you want, a pair of scissors, some fast-drying glue (hot glue or rubber cement work just fine), and maybe a pencil and a stapler, if you want.

Take your paper, and stack up maybe two or three sheets, to give you some volume and layers.  I cut my sheets in half to make them a bit more square.  Take your pencil and, starting in the centre of the sheet, draw a line spiraling outward to the edge of the page.  You can also just freehand cut your spiral if you wish, which is why the pencil is optional.

Take a pair of scissors and start cutting from the outside to the inside of the spiral.  When you get to the centre, instead of cutting out the full spiral, leave a little circle at the end, not too big, but big enough.  You can trim it later.

I found it was a little easier if I stapled the future site of my final circle before I started cutting.  It helped to keep the layers under more control, though a little separation is both natural and desirable.  You can also staple the circle later.  Or not at all.  That is up to you.

Starting on the outside of your lengthy paper snake (the side without the round circle “head”), start rolling up the paper.  You’ll want it to be tighter at first, and then looser as you get to the end.  Keep the bottom edge of the paper all lined up as you go along.

When you get to the end, put a generous dollop of your fast-drying glue inside the bottom of the flower and fold the final circle down over top.  If you want it to unroll a bit before it dries, you can loosen your grip a bit, or if you want it to be all contained, then hold on tight.

Now make a bunch more.  I made five before I felt guilty and had to go back to work.

You can stick these puppies on anything.  I’ve seen them on presents, on wreaths, as garlands … whatever floats your boat.  If I had some more skill (and some decent floral tape), I would make these into stand-up flowers that could be put in a vase.  For ease of transport and disposability, I am going to make a sort of pop-out picture out of paper.

These cardboard squares came as packaging material from one of the books I ordered at work.  I think they’ll provide a nice stiff backing to my planned project.  I can use one as a canvas, and cut another to provide a backstop so the whole thing stands up.

I briefly thought about wrapping the backdrop in some form of pretty fabric as a nice contrast, but then I stopped myself.  The whole idea of this little gift is that it will be recyclable when I am done.  But I think the brown cardboard back with the printed white paper on front is a nice contrast in itself.

I rolled thin strips of printed paper up diagonally to make narrow tubes which became the stems of the flowers.

Tape a few strips of cardboard to the back to act as a stand.

And there you have it.  A pop-out paper bouquet. View of St. John’s not included.