Look! I finally did it! Up until Easter Sunday this room was still just full of boxes, but I finally sat down and cleaned everything up and put things away and unpacked. For some reason I’m missing the legs that go on the two sets of wire shelves I normally use, and we’re going to put another table in here to serve as a workstation (and add some pegboards and other things), so it’s still a work in progress. 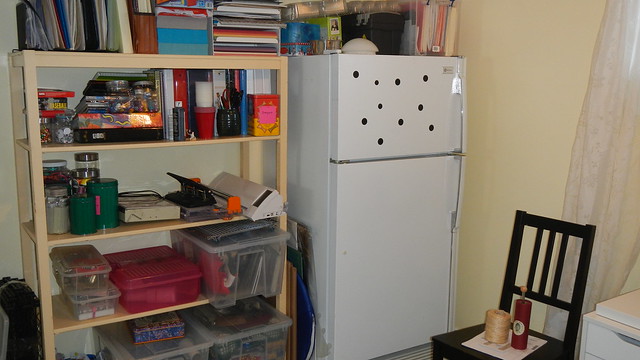 But in the meantime, it’s BEIGE. And as I’m sure you’ve seen me mention before, beige is my creative equivalent of a soul-sucking straw – I can’t deal with it. We’re going to completely gut this room sometime in the next few years – have the asbestos removed and lower the floor to the same height as everything else on this level (and install a heated floor!). But until then, there’s no point in trying to gussy it up too much. And yet … BEIGE. It might be some time before we get around to this room, what with our impending chaos. I don’t want to go crazy in the interim. 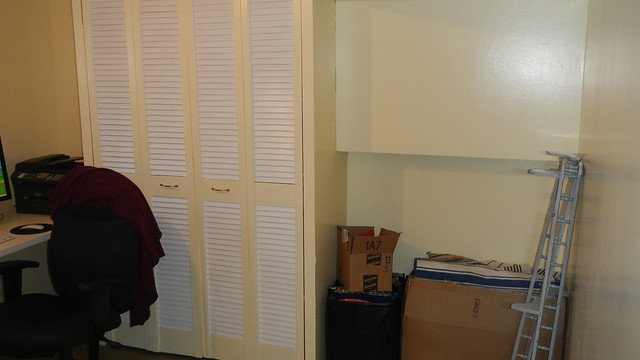 So I was thinking, with regards to this bifold closet with slats (now, with EXTRA vintage!), that I could jazz them up a bit. They’re what you see when you walk in the door, so I thought they could be a bit more eye-catching. I was thinking of doing a simpler version of what I did with the coffee stirrer wall art and that wooden tray – of course, painting the slats as if they were the little wooden pieces. I’m just going to use craft paint but it’ll be a fun rainy day project. 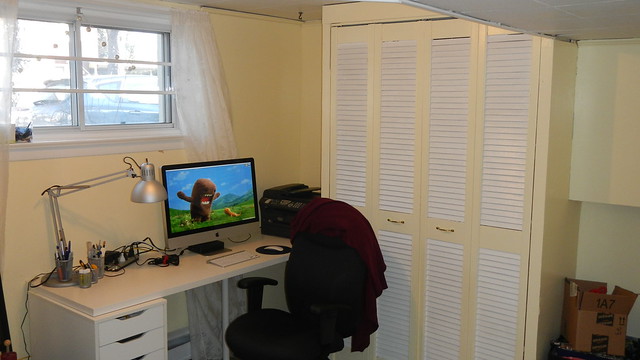 What do you think? Should I go for it?

And if so, what colours should I use? Leave your comments with your favourite colour scheme!

With our summer schedule set to impending chaos, getting our new house in order has been a priority for us since we moved in mid-January. That said, life always gets in the way of the best of plans, and two months into our residence here, we’re not even half done. Not even close. It doesn’t help that I’ve spent the past three weeks out of the country.

Anyway, one room that we have mostly gotten into order is the future nursery, which we’re calling the ocean room. We have enough marine-related knickknacks and art that we’ve collected over the years to make a loose theme in there that we think the baby will like (our other two bedrooms will be the desert room and the forest room, respectively, though we haven’t gotten there yet). Here’s what the ocean room looked like when we moved in: a nice bright, sunny, YELLOW room. There was even yellow on the ceiling (because the previous owners were terrible painters). 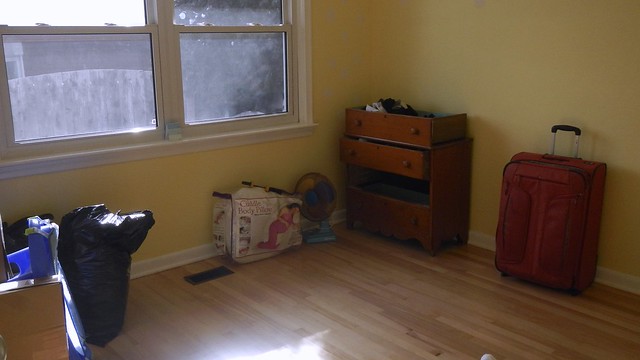 First I needed to patch all the weird holes they’d left in the walls – this wall was covered with weird plastic screws so I have no idea what was there before. 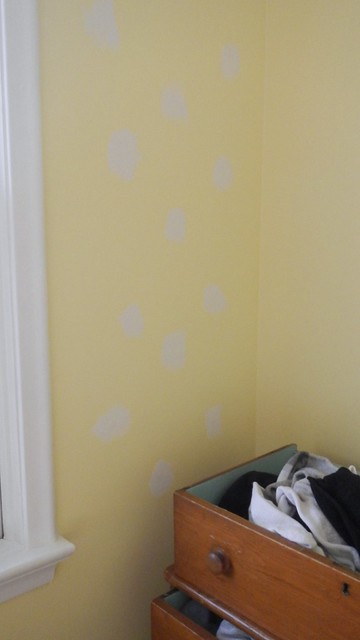 I also removed this mirror that was bolted to the door, as it was warped and totally unflattering. 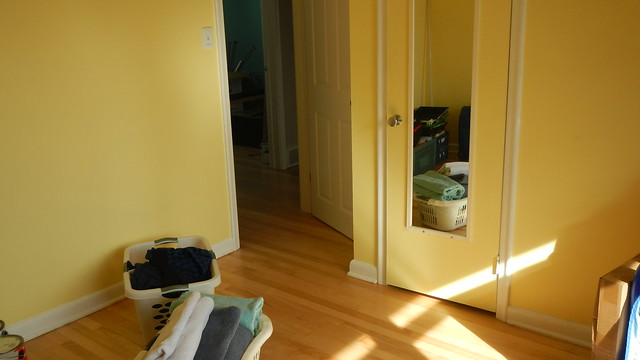 Then I used painter’s tape all over the place. I know how to paint a room without it but when you’re tired and you have other helpers who are perhaps not as adept as you, it’s handy. 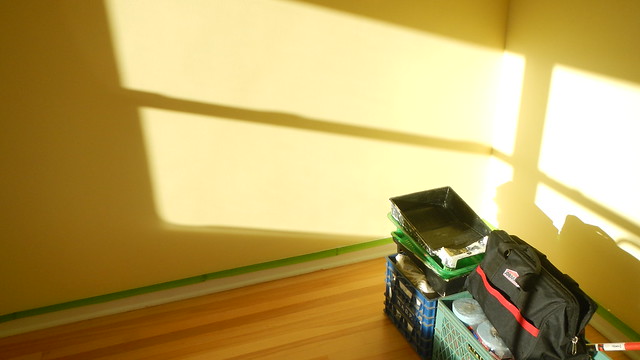 And here’s where paying a little more for a certain brand will stand you in good stead. I use Frog Tape, which is wayyyyy better than the generic green painter’s tape. 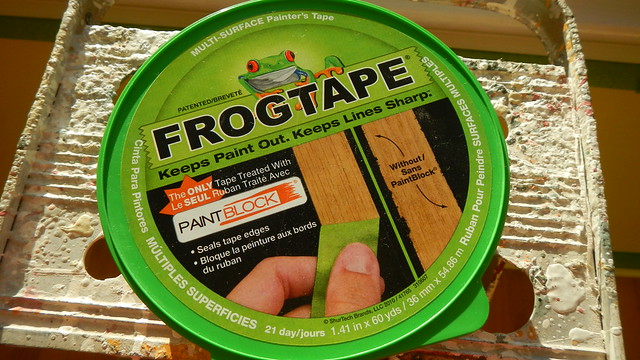 Clearly nobody painted under that mirror for a while: 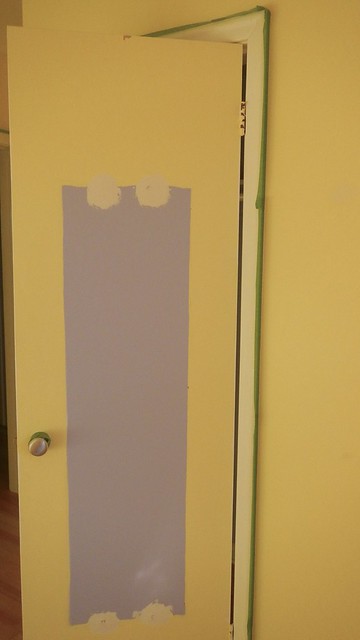 It took several coats of primer and trim paint to restore it to some sense of normalcy: 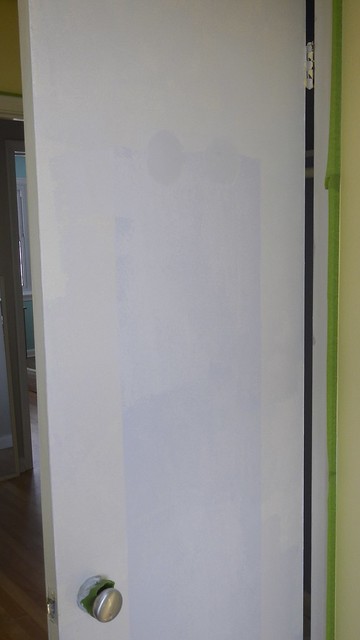 The inside of the closet also needed a good priming. I left it with the tinted primer for now, because anything is an improvement over the insane purple that was in there before. 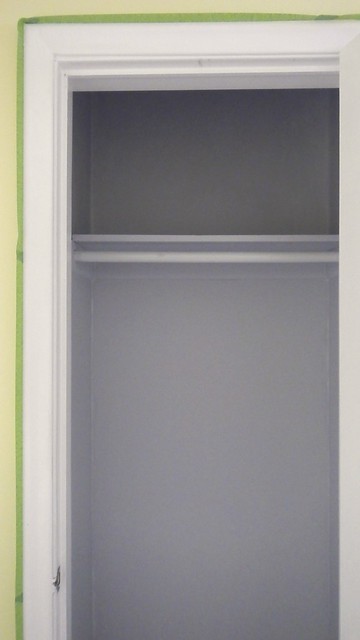 And then my lovely big brother Krystopf came over to help me paint! After accepting his offer I learned he’d never actually painted anything before, which complicated things, but it was nice to have an extra pair of hands as the Pie was occupied with other household projects at the time. 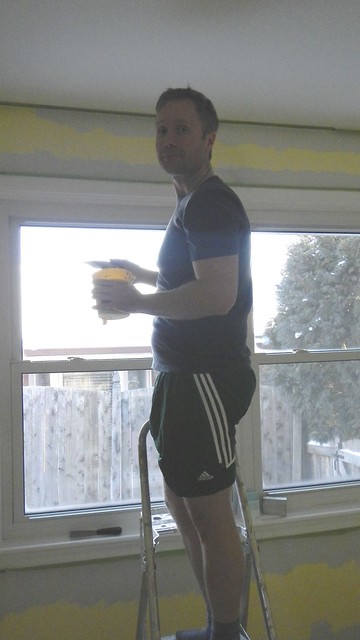 The first coat of primer (and Krystopf’s painting skills) did little to hide the yellow from view, despite me using a tinted primer instead of plain white. 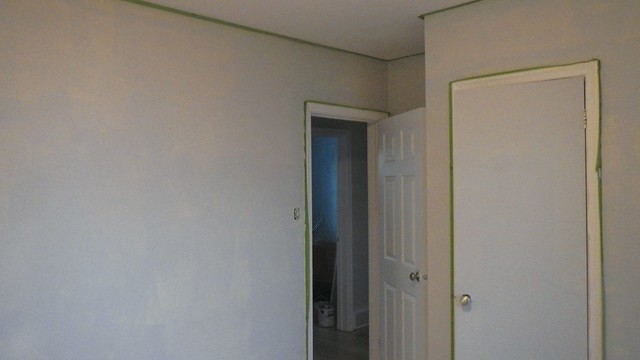 Finally ready to start cutting in with our blue paint – it’s called “Seashore” which seemed appropriate. 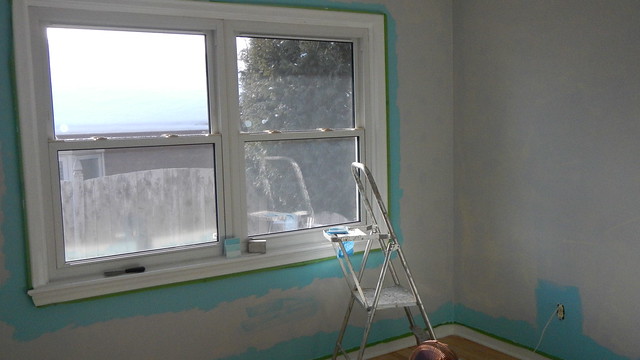 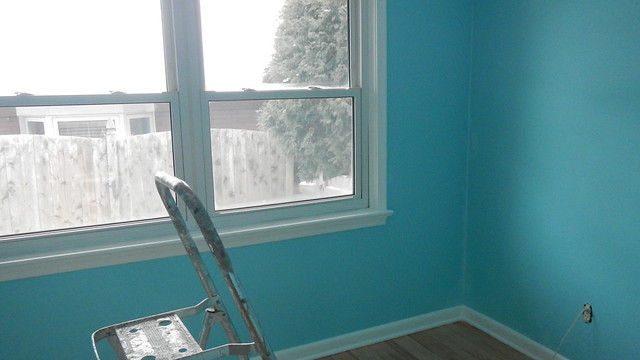 Coat two, trim, and ceiling done and finally we can put some stuff back in. I still need a mattress for the twin bed (where I will be sleeping) and a few other things, but we have some fun projects lined up for this room, so stay tuned! 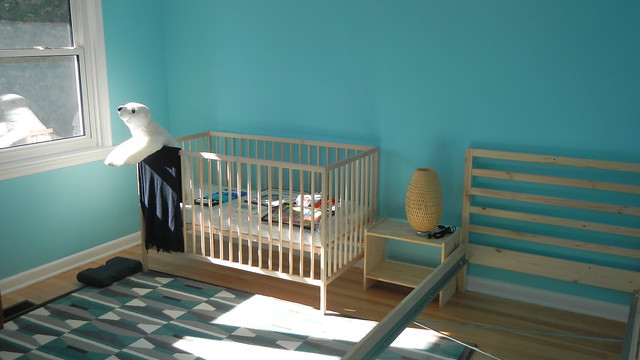