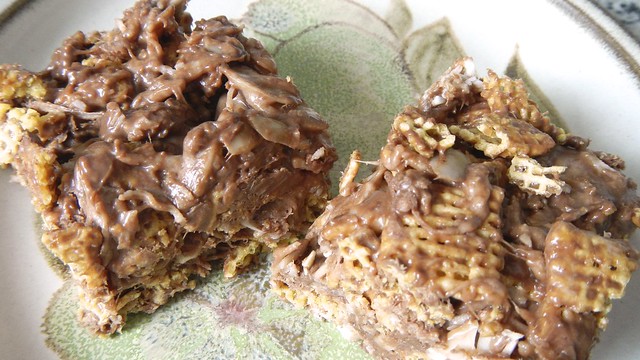 I thought the name I had come up with for these was pretty cute but one of my coworkers objected and decided they should be called “Chexicans” instead, because of the tenuous (maybe) connection of almonds to Mexico. Then he came up with Chex Yo Self, Chex-o-Slovakia (because Nutella was invented in the Czech Republic), and Early Chex Out (“like early check out, because if you eat too many you’ll die at a young age”). Then he arrived at “Dirty Chexican” because it made his fingers sticky. So I told him I would let you guys decide on a name because you are way smarter than he is. Annnnnnd GO! 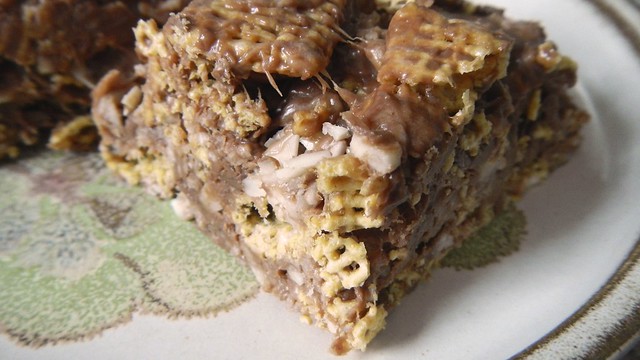 In any case, these little blocks of whatever-they-are are well-received wherever you want to take them. Aside from a wee bit of butter (that could be replaced with margarine), they’re dairy free, and the rice cereal makes them totally gluten-free as well. For nut-free folks you can easily skip the almonds. I totally made this recipe up as I went along so there’s no reason for you not to play around with it too! 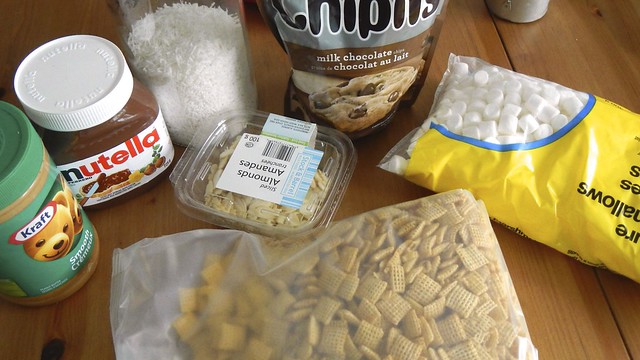 I started with a big-ass bowl and into it I dumped a whole box (about 5 cups) Chex cereal. It was the honey-flavoured but you could use plain too. Then went in about 1/2 cup sliced almonds (use any nut you like – these were on-hand), 1 cup unsweetened dessicated coconut, and 1 cup chocolate chips. Or about those amounts. I didn’t measure anything. I gave that a good stir. 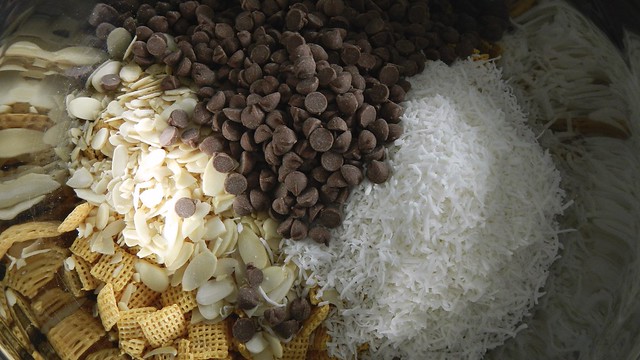 Into a small pot on the stove went about 3/4 cup Nutella and 3/4 cup peanut butter. The one picture I didn’t take doubles of is of course the one that turns out blurry. 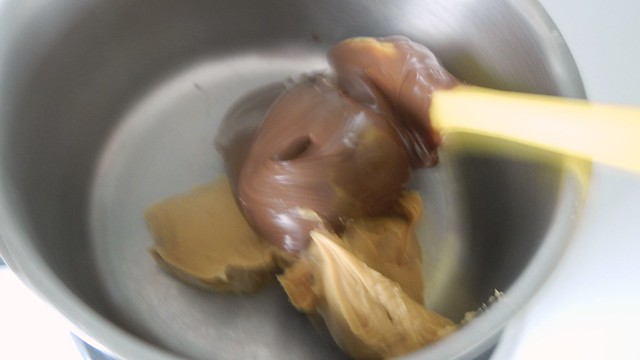 I stirred that around until it was fully melted and amazing.

In another pot I melted about 2 tablespoons butter. 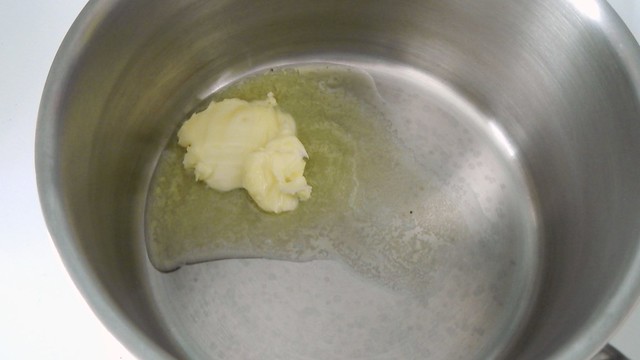 Then tipped in a whole package (about 5 cups) marshmallows. 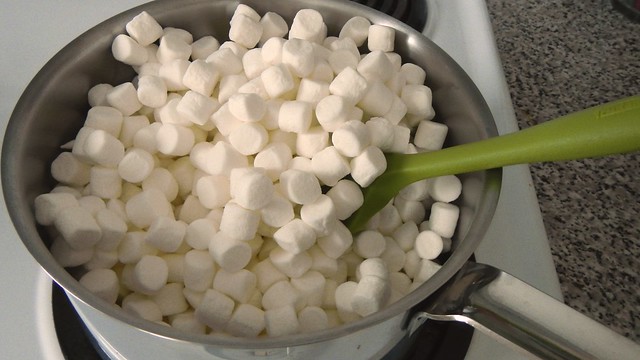 Stirred that up until it melted. SO GOOEY. 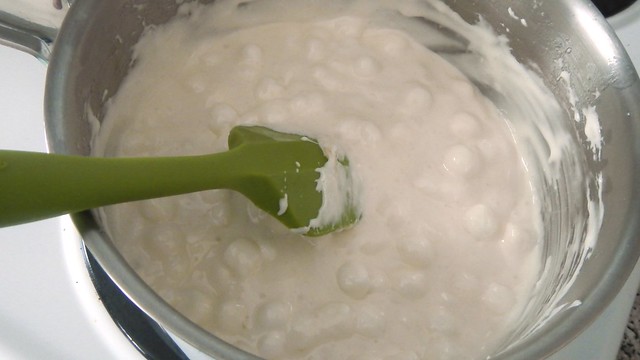 Then I added the hazelnut peanut butter to the cereal and stirred it for a little while. 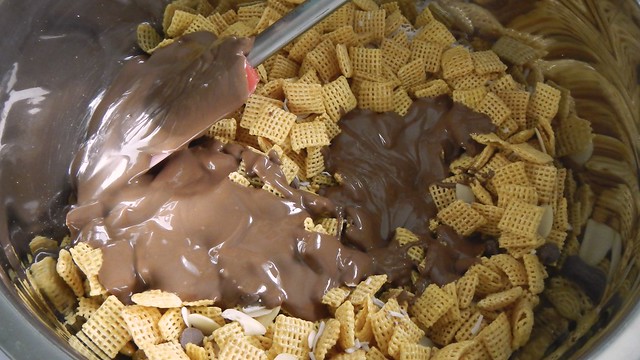 Then went in the marshmallow and that got stirred around. 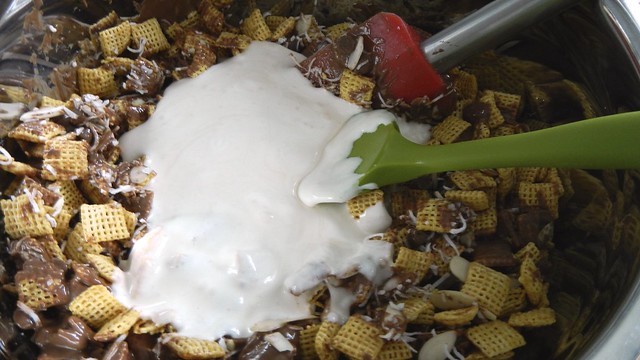 I plopped it into a high-sided baking sheet lined with parchment paper and pressed it down into place. You can shove it in the fridge to speed up the hardening process but it will happen on its own on the counter if it’s not too hot outside. 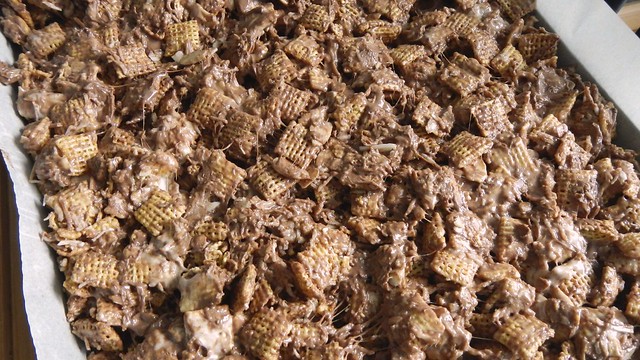 When it’s hardened you can cut it into blocks. 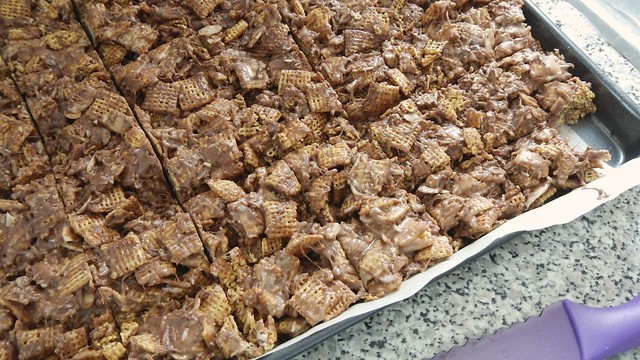 Store whatever doesn’t get eaten in an airtight container. Enjoy! 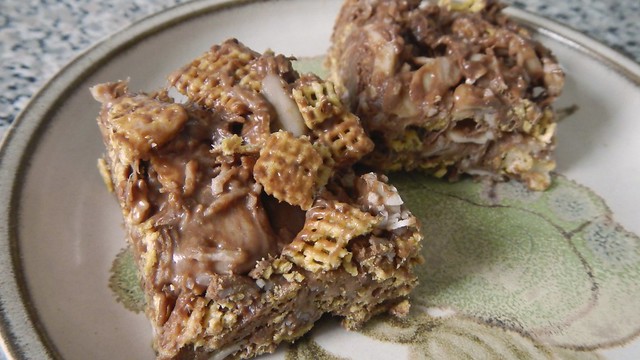