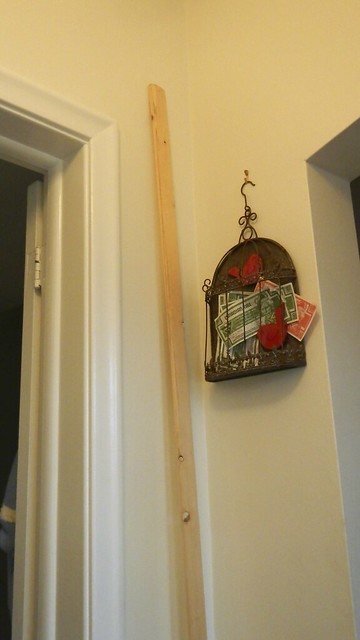 For Christmas, I gave the Pie a stick. This stick, to be specific. It’s actually a piece of moulding too knotty for my dad to use, and I scavenged it out of his garage. Trust me though, I have a plan. 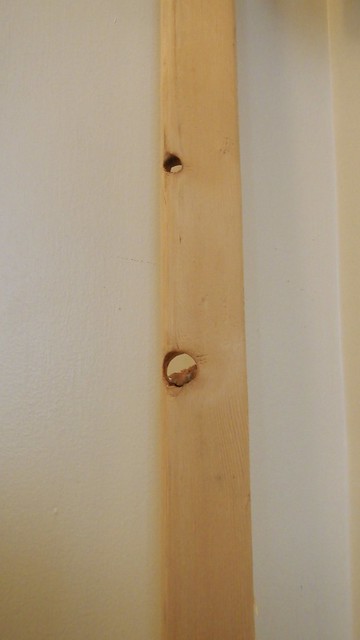 I’m sure all of you have a relative with a cottage or grandparents’ home where, be it a door jamb or a piece of wall panelling, they have accumulated the heights of all the family members as they’ve grown over the years. At the cottage my great-grandfather built (now owned by my mother’s cousin), these height markings go back several generations. And it’s always sad when the time comes to leave that house behind, together with those memories that are so firmly a part of the house. Sometimes you can get away with removing the fixture they’re on, but sometimes not.

We plan to stay in this house for a long time, but you never know what will happen, so I wanted to make sure that when we leave we can take our memories with us.

First order of business is cutting down the wood to fit. I made sure it was cut so it sits above the moulding on the floor, runs parallel to the doorjamb in our guest bedroom, and ends at the top of the lintel, so it’s low profile. Then I drilled three holes (one at either end and one in the middle), and sanded it down. 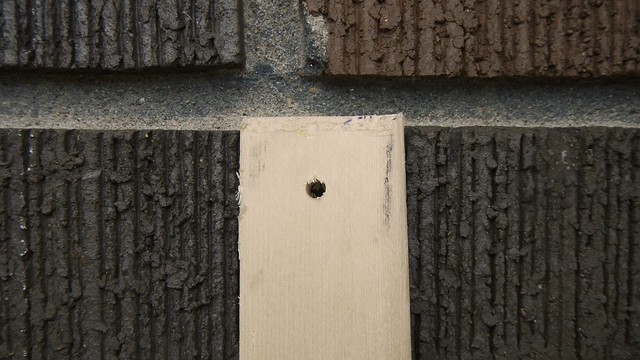 During one of LongJohn’s naps I popped just outside the backdoor and spray painted the whole stick white. Then I had to kick around my newly white leaves so the Pie wouldn’t see them. Fortunately it snowed soon thereafter so I was safe. 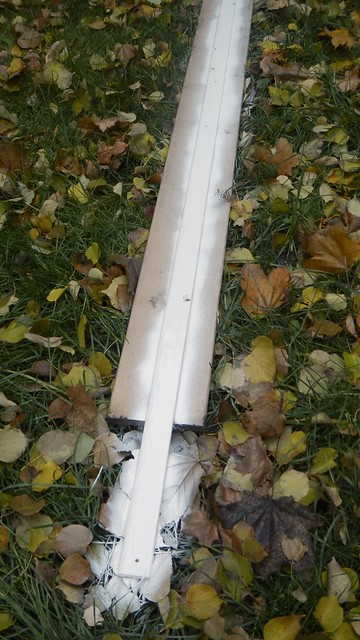 Once the paint was dry I started marking distances with craft paint. We use mostly Metric in Canada but because we’re so close to the United States we are pretty fluent in Imperial as well, so I decided to go with both. For the centimetres I made a bigger mark every 10 and for the inches I made a bigger one every 6. I also made sure to start my measurements on the stick at the distance it sits from the floor, which when you take into account the moulding at the bottom of the wall, was about 10cm. In retrospect I wish I’d used a finer paint brush but what’s done is done. 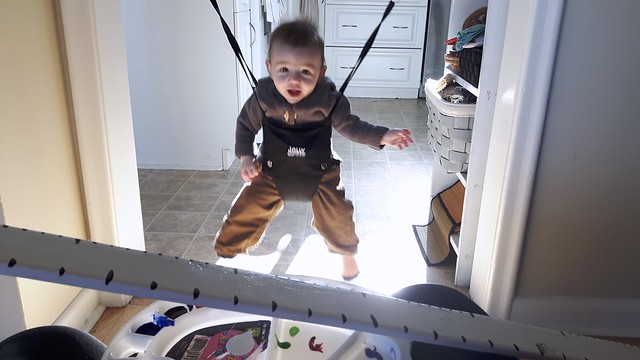 I added in the numbers in a different colour (again, wish I’d used a finer brush). Then I sprayed the whole thing with a clear lacquer to keep the markings fresh. 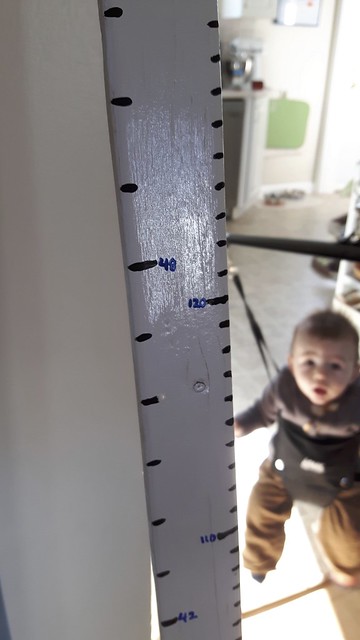 Then I wrapped it and hid it behind a bookcase. Now when we take our measurements, we mark them in permanent marker and I dab a little clear nail polish over them to keep them from rubbing off. And when we’re ready to leave, we can take it with us! 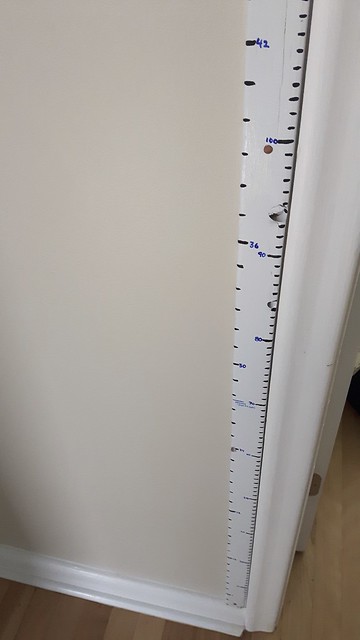 My parents bought the house they live in now about twelve years ago, and the house is about twenty years old now.  In fact, it’s the first new construction house my parents have ever owned.  So new, in fact, that when we all moved in back in 1997, it wasn’t quite finished yet.  Like it didn’t have a back porch.  That sort of thing.  It also used to be a rooming house, so there were some weird things going on.  The room that is my dad’s office was designed to be a laundry room, and when they bought the house it was actually being used as a kitchen.  As it was pretty low-priority in the scheme of everything else that goes on in my parents’ busy lives, it remained in more or less its original state.

This is the before shot, when my dad and I were clearing out all the furniture and stuff.

You can see the artful sponge painting that outlines where the laundry sink used to be.  And the place where the faucets come up and out of the wall.

This dryer outlet and vent also needed to go.  As did the b-awful linoleum.  I hate linoleum.

So out came the mouldings and the overhead lighting.

After checking to make sure the fuse was dead, out came the dryer/stove outlet.

Make sure you check it more than once before you start cutting wires.

This rubbish bin was filled and emptied many times before the job was done.

The vent will get cut flush to the wall and filled with expanding spray insulation.

The faucet pipes were capped and sealed with solder and the plastic frame removed.

We will put a piece of gyp-rock over top and patch that sucker, same with the one on the floor.

Just screw it in place, using shims as a backing, and trim off the excess.  Fill the holes with Durabond-90 or other crack filler and you’re good to go.

All the other holes and cracks got filled as well.

Now for that ugly awful floor.  This was my especial project and it took me FOREVER.

Whoever put the lino down GLUED it, which is not something you normally do.  And they didn’t just lay down lines or dots of glue.  No.  It was like they took the can of glue and spilled in on the floor.  But not all over the floor.  This part came up super easy, so we thought it would be more of the same.

I spent about seven hours with a pair of gloves and a putty knife peeling up the rest of it.

And let’s not forget all the glue that stayed on the floor.

Which my dad spent three days scraping off.

It was a sticky business.

Back to the walls.  On with the primer.  Note you can still see the terrible, terrible sponge painting shining through.  Took a couple of coats of paint to get that hidden.

Next the crown mouldings went on and were lined up.

Nailed and glued in place.

You can use wood filler to artistically cover the spots in the corners where it doesn’t quite line up.

And to cover your nail marks as well.

Now for the floor, which we replaced with a nice floating bamboo one with interlocking pieces.

You can see the grooves here.

Make sure to measure out everything ahead of time.  It helps to label your pieces and to draw yourself a little map.

You will need to cut pieces to fit the vagaries of your room.

Dad glued down the first section.

Make sure to follow the instructions on your glue.  This little grooved applicator enables the glue to spread under pressure.

You want to make sure your pieces are super snug together, so a rubber mallet is very handy.

We noticed that the glued section was making cracking and popping noises, so the next sections were nailed in place as well, with the nails going through those little grooves I just showed you.  It cracked the grooves but kept the things on the floor, so there you go.

The moulding on the floor will cover up that wee gap there.

Then you paint.  Again.  Always a good time.

See?  This is after it got a nice shiny coat of enamel.

You can scrape up your spills by covering a scraping razor with a piece of cloth, and then you won’t scratch the floor.

And after everything was moved back in again.  What a difference!

Today we had a bedding battle during my morning standup. After that we tried to get outside as much as possible, but somebody was upset that the pool was still too cold to swim in. Then we had cake. And for some reason cake is only worth eating if you put the whole piece on your fork and wave it around first. Happy week 12 of #workingfromhomewithkids #covid19ottawa #alidoesit
Cold and rainy and not the best day to start setting this up but it'll be a godsend the next time the sun shows its face. #alidoesit
He's pretending to sneeze. One of his favorite games. #alidoesit #toddlerlife
Saturday seems to be our takeout night these days so we thought we'd check out @fatbastardburrito @merivalemall . Decidedly worth the masked adventure! #alidoesit