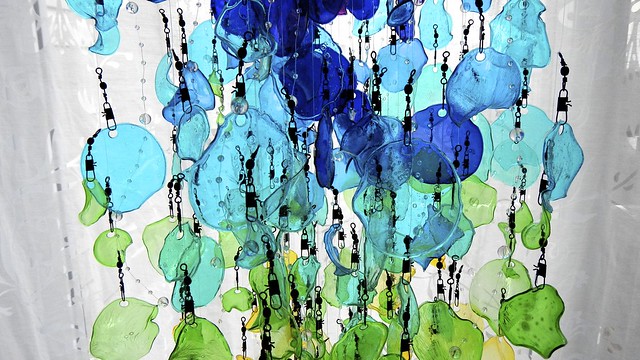 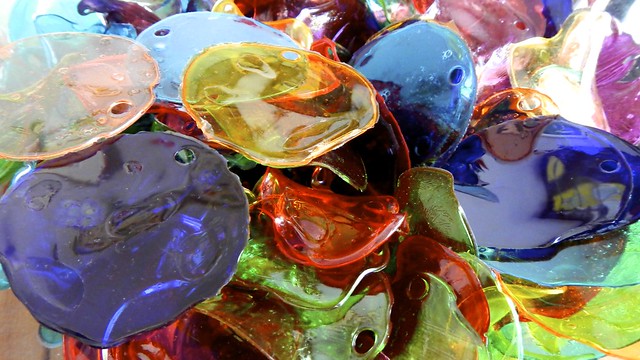 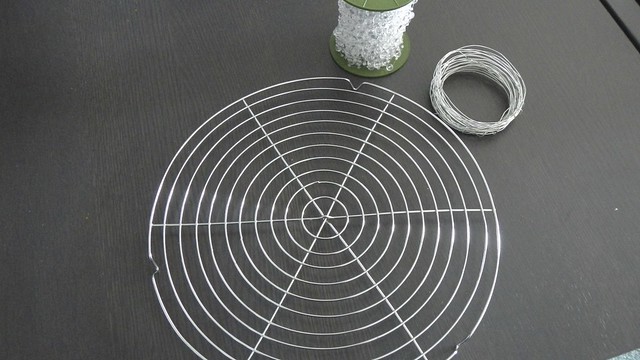 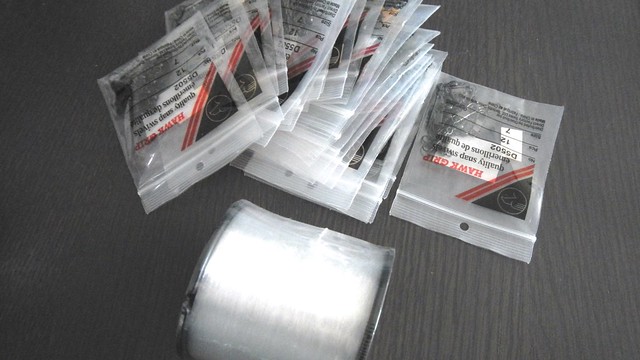 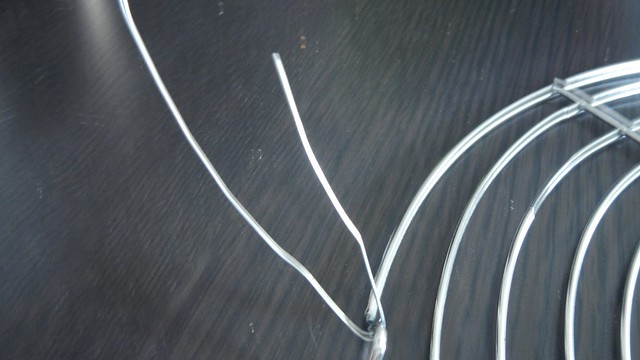 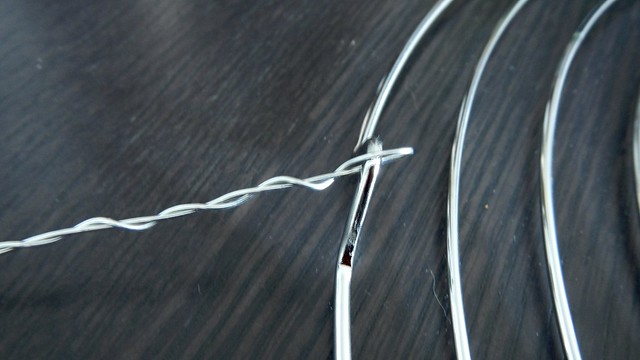 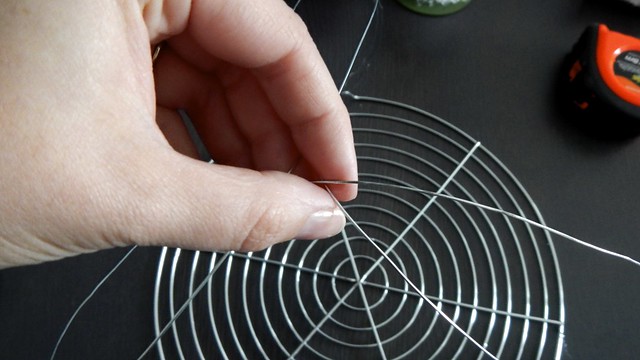 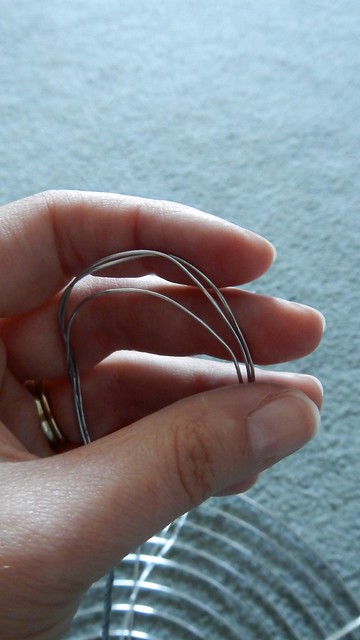 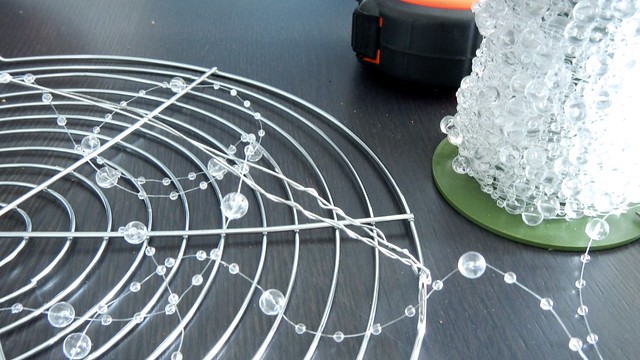 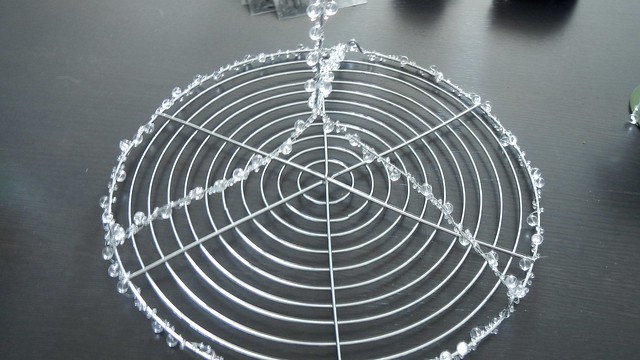 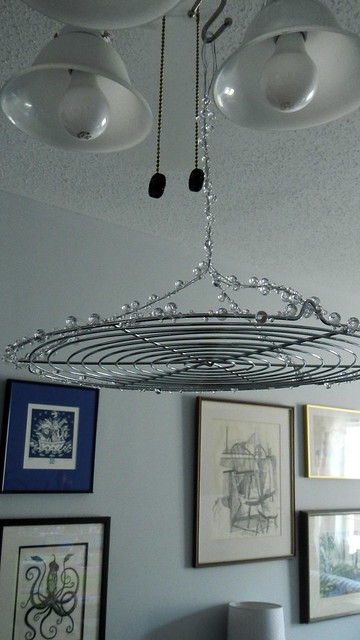 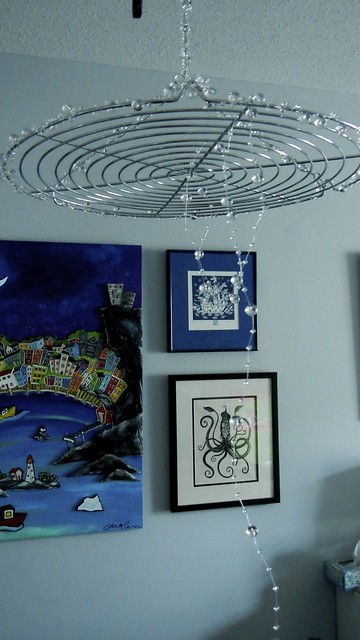 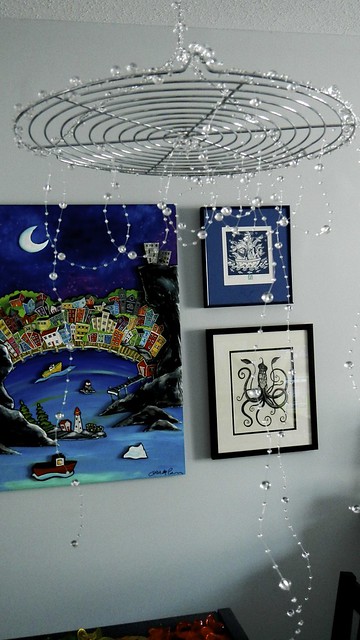 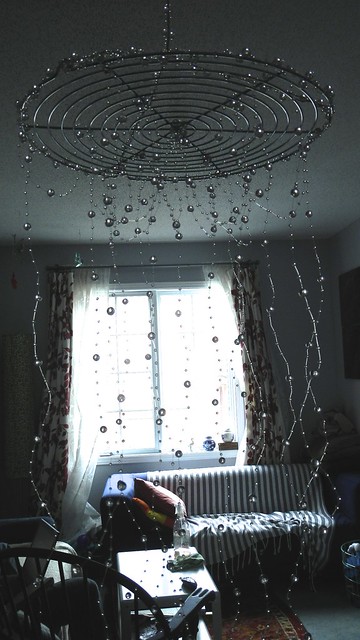 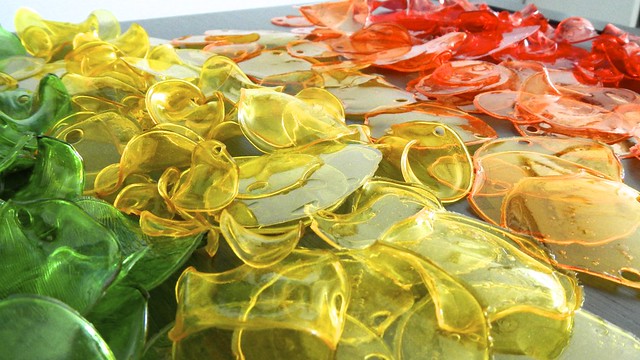 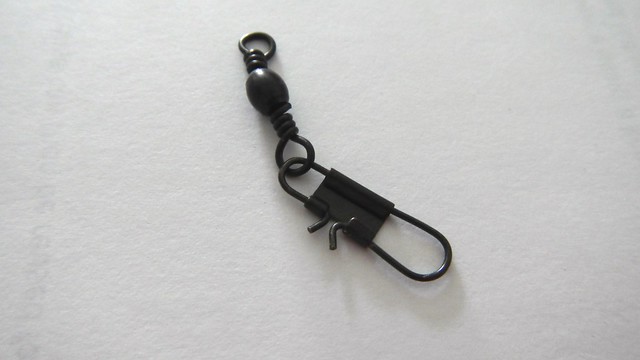 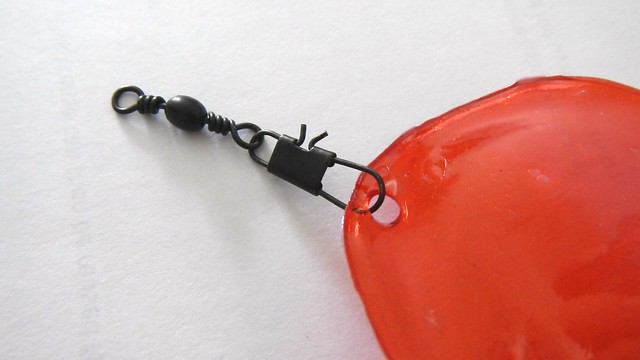 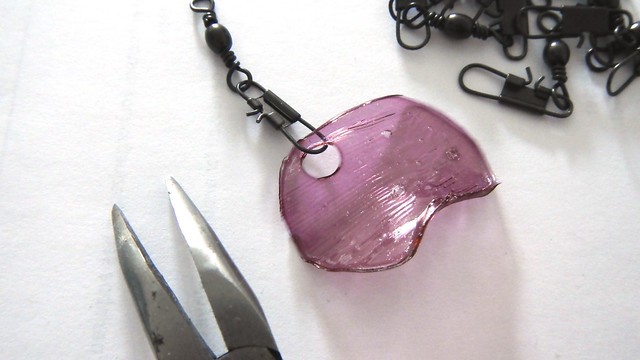 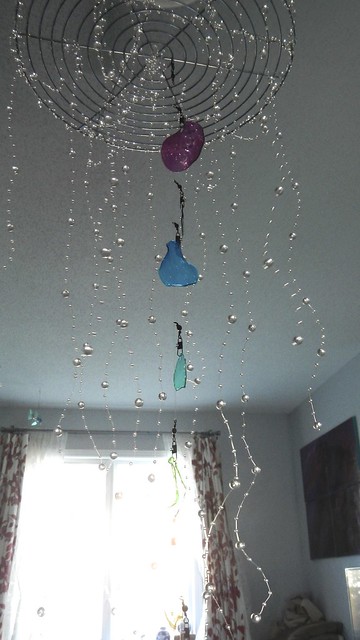 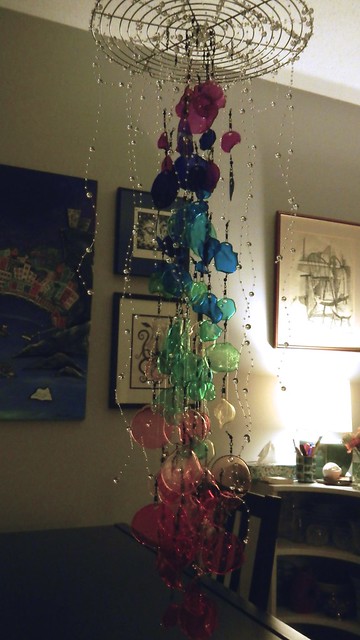 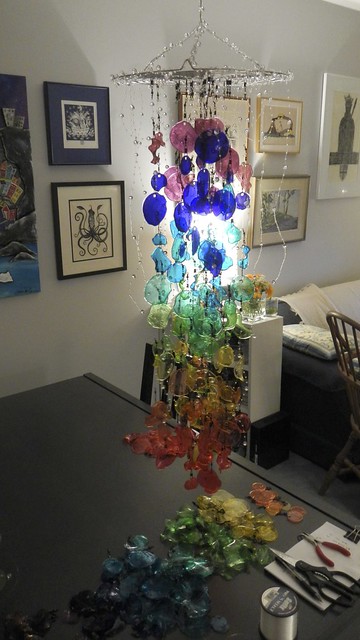 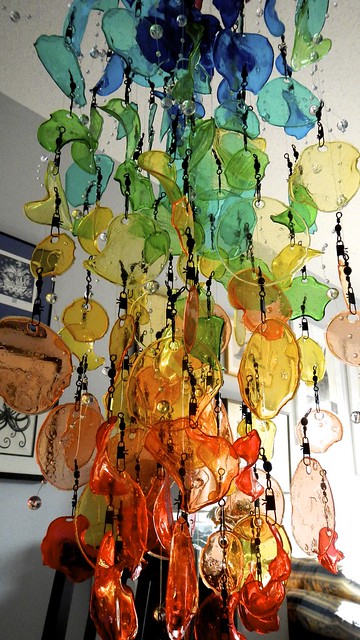 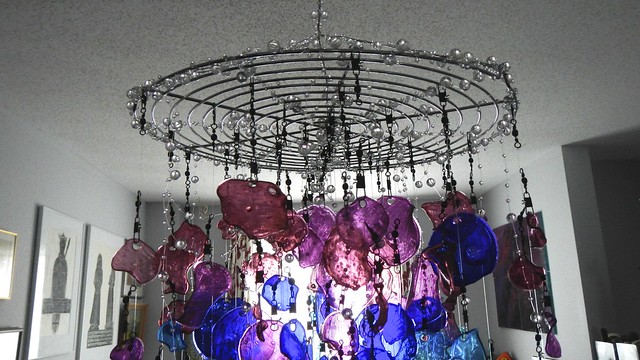 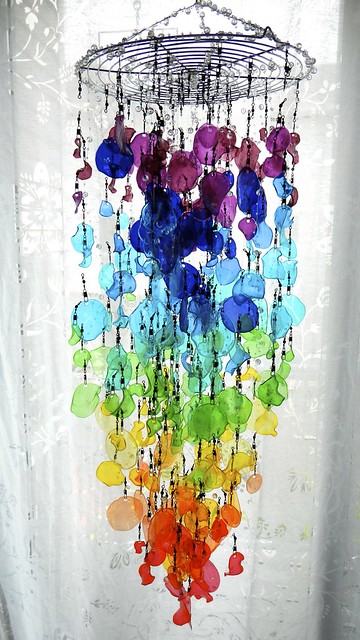 My niece vacillates between wanting to be President of the United States and wanting to be a princess. She can probably be both. She’s a smart kid. A smart kid who likes things that are pretty and sparkly.

So once I can figure out how to package this properly, I’m sending it off to her for Christmas.

You’ll remember that I experimented with cutting rings when I learned how to use my glass-cutting kit a while back.  Of course, I broke way more rings than I succeeded in creating, but finally I managed to make enough to have this work out the way I wanted it. I have some rings from a ginger jar, a salsa jar, some beer bottles and two wine bottles.

My first step was to gather my gear together: the rings, some sturdy fishing line, a pair of scissors, a strong stick, a towel, and a bowl of warm water and vinegar.

The water and vinegar help to remove any residue on the glass from my cutting process.  Gets rid of fingerprints, too.

So now I have arranged the rings in the order in which I want them.

And I used the scissors to score some lines on the stick, to hold the fishing line in place and keep it from sliding off under the weight of the glass.  I will put a dab of glue on each knot afterwards just to be on the safe side.

Now to tie everything together.  I used reef knots, to ensure everything was super tight.

Then I attached it to the stick and looped some more fishing line on the top to use as a hanger.

The full deal, though the light could be better.

A cascade of pretty colours!

I haven’t been feeling particularly inspired in the kitchen lately, so the Pie recommended that I make “something like that tea cozy,” which I took to mean he wanted me to get all crafty.

If you know me, you know I am a rock hound.  If you don’t know me, well, now you know that about me.  I love rocks.  I nearly minored in geoscience during my undergraduate degree because I loved them so much, but I didn’t have the physics I needed to take the advanced courses.  So I’m a dabbler, really.

I have a substantial rock collection.  They are in my garden.  They are my door stops.  They decorate my mantle and my book shelves.  I keep them in a bowl in my kitchen.

And I know where they all came from, too.  Bubbly volcanic basalt and gem-quality chunks of jasper from the beaches of my BC childhood.  Sugary white and rose pink quartz from Algonquin Park in Ontario.  A chunk of slag picked up on the shores of Lake Erie.  River-smooth pebbles from our old cottage at Lavergne Bay, near Arnprior, Ontario.  And some lovely round treasures from our recent visit to Middle Cove Beach.

Spending most of my life near the ocean means I also have a bowl of shells in my kitchen, too.

Oysters (which I gathered from the beach, cooked in a pail of seawater on an open fire, and ate, how glorious), mussels (I had a massive foot-long complete shell at one point that broke in one of my many moves), periwinkles, limpets, barnacles, snails, scallops, cockles … even a giant moon snail shell given to me on a class camping trip to Denman Island by the first boy I ever kissed.

What you might not know is that in my closet I have a HIDDEN rock collection.  Two little plastic boxes in my office closet, filled with even more rocks, strange found objects like faucets, cream bottles, and artillery shell casings, and mismatched pulleys.

Twisted segments of driftwood.  The top to some ancient incense burner.  And lots and lots of sea glass.  Bags of it, collected during long afternoons ignoring the rain, scrambling over the slippery rocks by the house, eyes glued to the ground in front of me.

So rather than keep it in the closet, I decided to use some of it to make something.  How about a mobile?  I’ve been toying with the idea of making one for a while.

I sorted through my treasures, and the pieces I chose were solely based on my ability to wrap a piece of nylon fishing line around them and get a decent knot.  So my tools for this were some white glue, a pair of scissors, and some fishing twine.  And whatever else you got.

I’ve never made a mobile before, so it was an experiment in balance for me.  Tying the twine around rocks and pieces of glass was a challenge as well but I managed to get a few strings going.  To make a string, I started with a piece that could form the base and looped the twine around it and tied it tight.

I made sure I had two strings now of equal lengths coming off it.  I measured a random length of twine from the first object, then tied the two pieces together to make a base for the second piece.  Then I tied the second piece on, and so on.

Make sure to dab a little bit of white glue near your knots just to keep things from sliding around.

Balancing things was, well, a balancing act.  I found it much easier to put the mobile together while it was hanging.  I started with this round piece of driftwood I’d picked up in Victoria on the beach in front of my house.  Suspended from that was a piece of shale from Rose Bay, Nova Scotia.  Then a twig I pulled off my lawn here in St. John’s.  And then I worked on my strings.

A stroke of genius was to glue whelk shells (from Holyrood, Newfoundland) onto the ends of the sticks to act as barriers for sliding twine.  I put a few dabs of glue on the sticks as well to hold the lines of pieces in place.

Waiting for the glue to dry (or for everything to come crashing down).

Finished, and hanging in the dining room, the one place where the Pie won’t run into it accidentally.