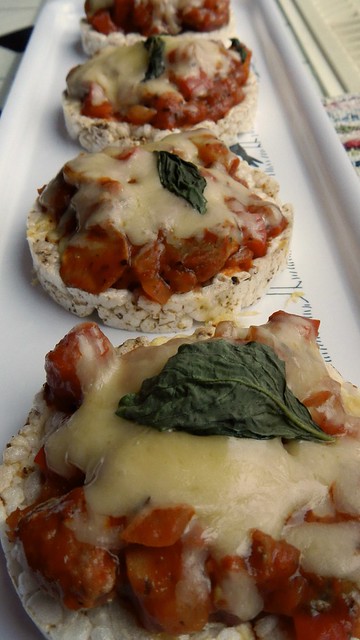 When I was younger, and my dad was away at sea and my brothers had gone out for the evening, my mother and I would sometimes take it easy from dinner preparation for one night and do something quick and dirty with the leftovers we had in the fridge. Now that I’m a grown-up, it’s the perfect thing to cobble together on nights when the Pie is out of town and all I want to do is plant my butt on the couch with a beer and watch the game. You just need three things: leftover spaghetti sauce (the chunkier the better), cheese, and rice cakes (this also works on pita, na’an, and any other form of flat bread). 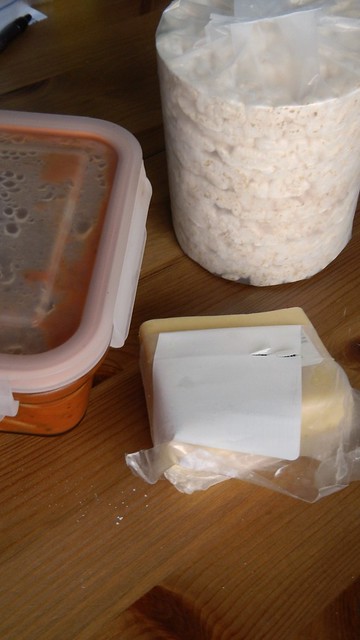 Heat up the sauce a bit and grate some cheese. 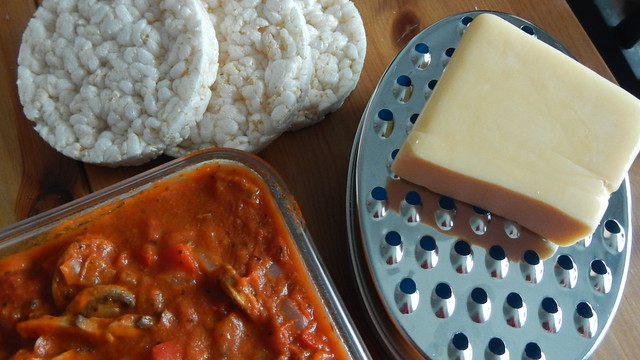 Gren has realized I have the cheese grater out. 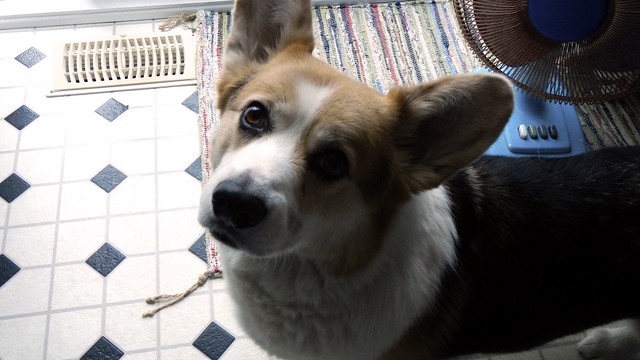 Gren is trying to inhale the cheese from where he’s standing. I love it when he wrinkles up his face like that because I know if he could see himself doing it he’d be totally embarrassed. 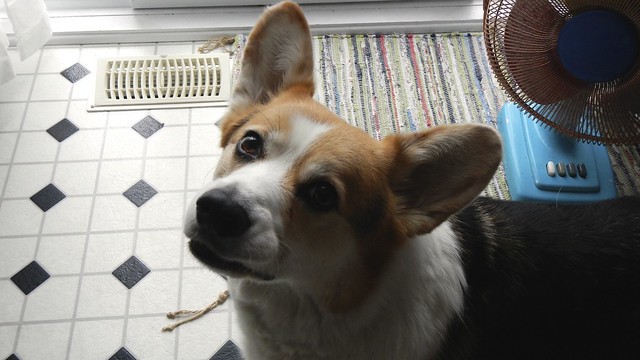 Line a baking sheet with parchment, move your oven rack to the middle, and turn on your broiler (don’t move it to the top or you will simply set all this on fire). Place your rice cakes(or flatbread) on the baking sheet. Top the rice cakes with your warm sauce. 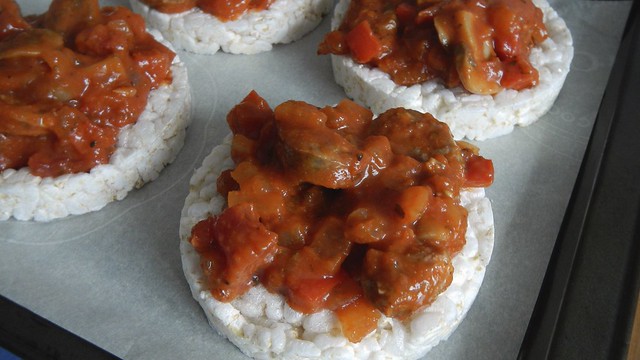 Add grated cheese. Give some to your dog or he won’t go away. To make it less sad singleton, I added some fresh basil out of the garden and that made me feel a little less lazy and pathetic. 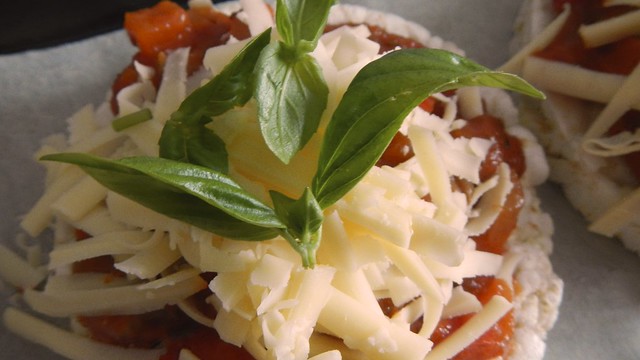 Broil until the cheese is melted to your satisfaction. 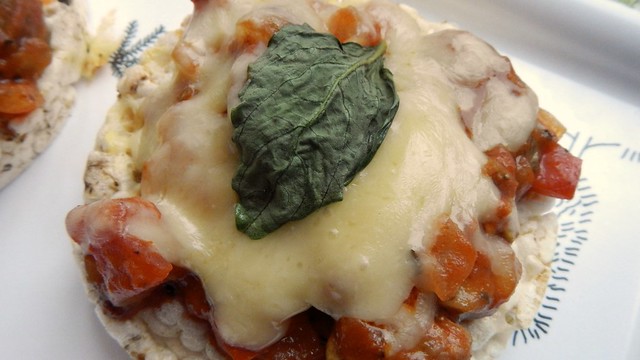 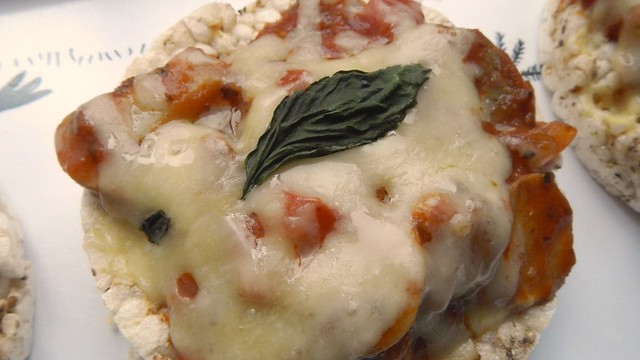 Happy Birthday in advance to Kristopf — this one is for you!

The Pie and I had Rene over at I Love Leftovers in mind when we thought this up.  I’ve been fighting off some form of the plague for the past couple of weeks and we’ve been getting pretty lazy when it comes to our meals.  We were also trying to clear out our fridge in preparation for the influx of our houseguests, so we were combining a lot of our leftovers and running out of ideas.

On this particular night, the Pie was inspired, however.  We had some leftover poached, shredded chicken and tortillas from some wraps we’d made the day before.

We also had some roasted sweet potato left from the day before that.  Add those together, plus cheese, and you have quesadillas!

So first, the Pie grated up a whole whack of cheese.  Gren decided he needed to help.  He’s a very helpful puppy.  And if a little cheese falls on the floor, he’s right there to clean it up.  Very helpful indeed.

Plop the leftover chicken (probably about a cup and a half) in a bowl.  It has already been seasoned with a Tex-Mex dried spice mix, but we thought we would add some more flavour.

My parents went to Avery Island, Louisiana, to visit the Tabasco factory (let’s not even begin to talk about how weird that is).  So for Christmas last year we all got lots of Tabasco-related gifts.  We even have Tabasco ice cream mix, but that’s a whole ‘nother post.  Anyway, the Pie and I got these wee bottles of flavoured Tabasco in our stockings, and we thought we would try the chipotle one.  Ask the Pie to say “chipotle.”  He can’t do it.

To give you an idea of the scale of the bottle, we wanted to place it next to Gren.

Actually, we had to try several times to get the shot.

He kept knocking the bottle over with his nose.  On purpose.

Finally.  Though I’m sure you’ve already figured out how small the bottle is.

So we emptied that sucker all over the chicken.

Then we added the cheese (about a cup and a half).

Then the roasted sweet potato (probably about one sweet-potato’s worth).  Mix that up.

Lightly brush the bottom of a flour tortilla with olive oil (for browning) and plop it in a hot skillet.

Plop half the chicken mixture on top.

Add another oiled tortilla on top of that and carefully flip the whole thing once the cheese is partially melted.

When the cheese is fully melted, remove from the heat and slice it up like a pizza.  Then do the same thing all over again.  Makes two.  Serve them with sour cream and/or guacamole.  Mmm, lazy dinners …