We were almost out from under all our snow, and then this happened. 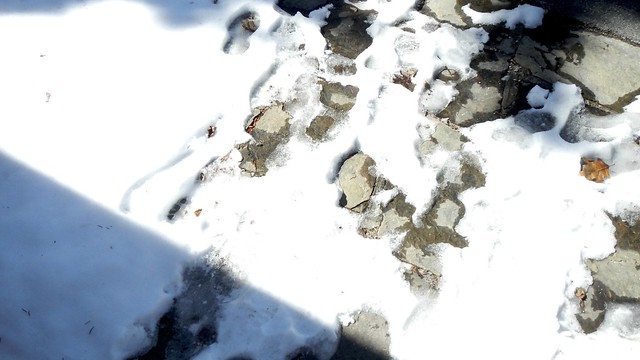 And we expect more in the next day or so. So very not cool, April.

But I can now actually traverse my own yard for the first time since we bought the house, which is exciting. And in doing so, I’ve realized there are so many things that need doing. You know I love my to-do lists (where I rarely complete everything on them), so here it is for the outdoors:

That ugly hedge outside my office window (yay basement office) I’m pretty sure is the reason that my office windowsill was lined with the corpses of ants when we moved in. Plus if you’re trying to get into the garage while there’s a car in that part of the driveway, it will rip your face off. And I’m not a fan of anemic evergreen hedges threatening to grow into my foundations. That sucker is coming out. 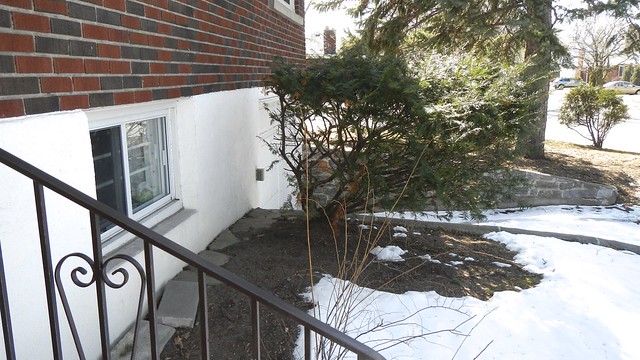 The driveway is rather narrow, and it looks like we’re not the only residents or visitors to have to drive over parts of the lawn on occasion in order to fit a variety of cars around the curve. When we eventually re-do the driveway we’ll widen it, but for now I think I’ll put down some pavers in these bare patches so they don’t look so terrible. 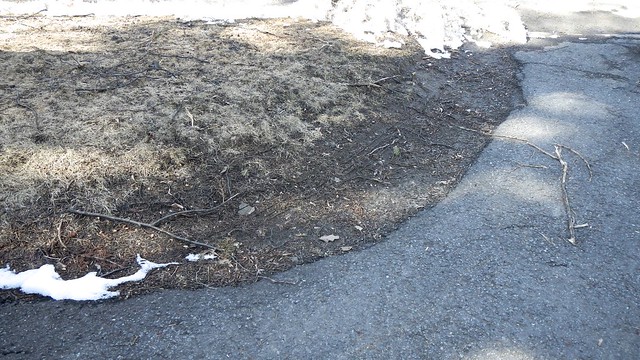 This swing hangs in the front yard, a depressing, raggedy reminder of spring and childhood safety issues. I’ve had to stare at it swinging in the blizzards all winter and I want to murder it a little. As soon as the ground is un-soggy enough to support a ladder the Pie is cutting it down and burning it. 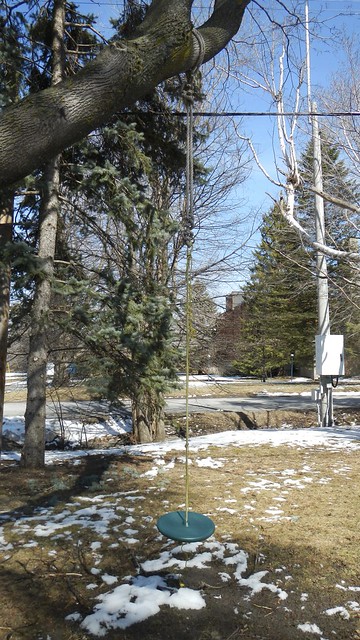 Also once the ground is unsoggy we will have to do some serious raking. The previous owners weren’t so fond of landscaping or lawn maintenance and so after the last open house they clearly just left the lawn to serve as a collection spot for EVERY SINGLE BRANCH IN THE NEIGHBOURHOOD. 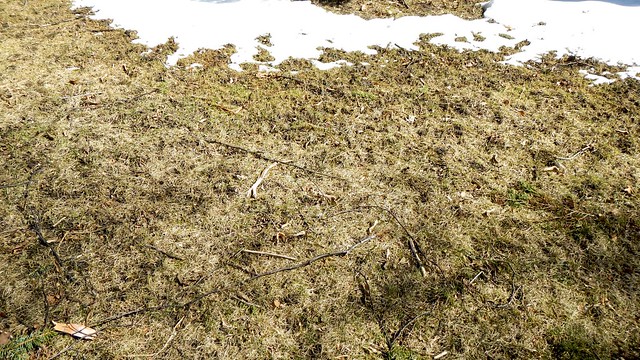 Our back fence. One thing of especial note: they planted a tree (and a rather expensive one at that) directly in front of the gate. Why? I have no idea. 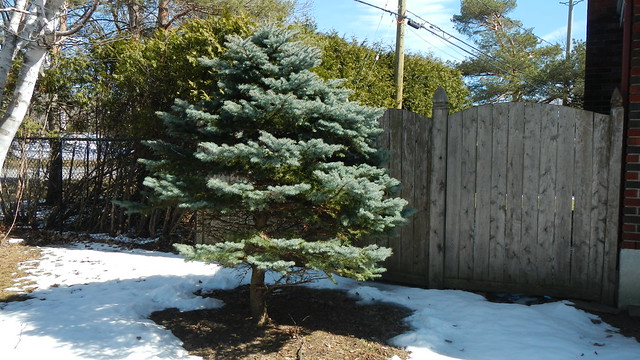 The fence is also rotten and wobbly and is also made up of like three different types of fencing. And an absolutely overgrown cedar hedge. 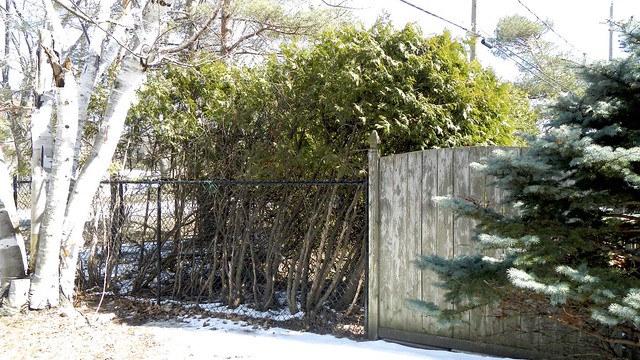 This tree is dead. Why nobody cut it down years ago I have no idea. But I own a chainsaw. So you know what I’m planning. 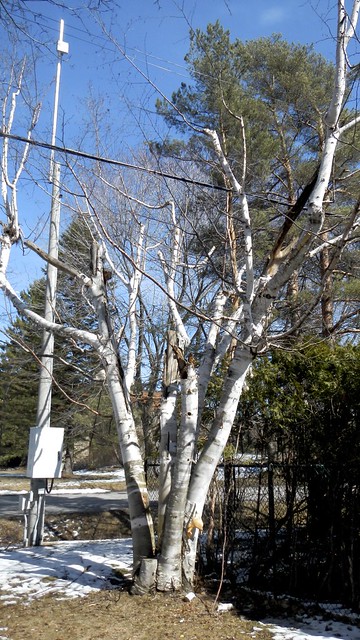 Through the blocked gate and into the backyard. Look at my air conditioner. Trust me, the cover actually improves its rusted-out appearance. It looks like it was installed before the turn of the century. We don’t even know if it works. I guess we’re going to find out soon enough. 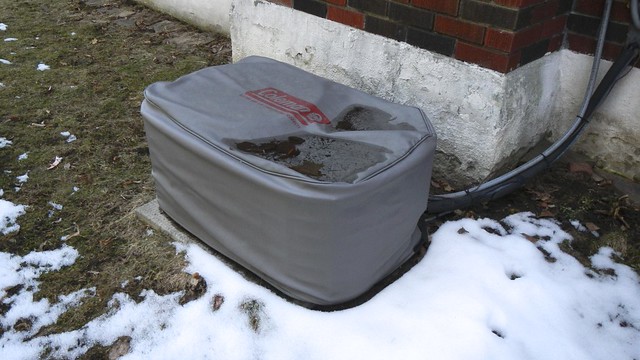 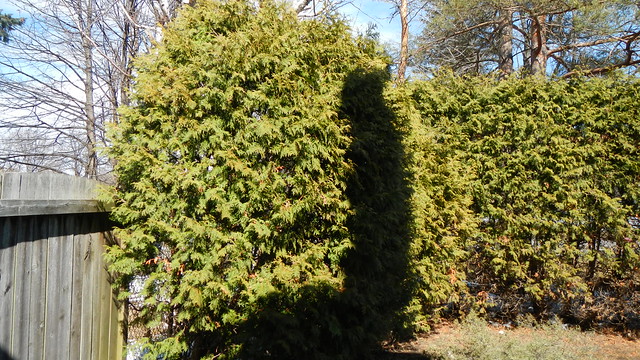 And then gets another four feet taller towards the back of the yard. It has successfully blocked all the wind from the other side into the backyard such that the parging and brickwork on this side of our house has never really dried out and is crumbling. When the hedge comes down we’ll have much better airflow and a yard that is about five feet wider than it was before. 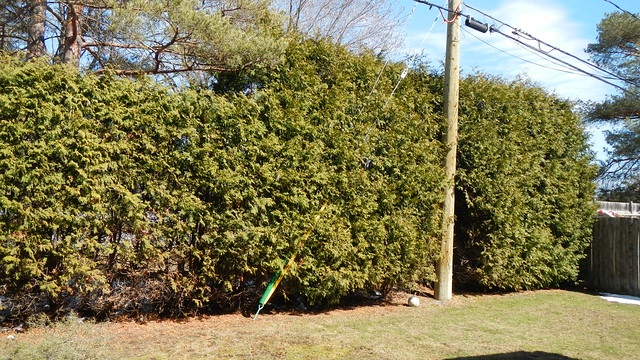 We’ll also replace the fence all around with something solid and standard. This other gate doesn’t even latch because the whole thing is falling down. 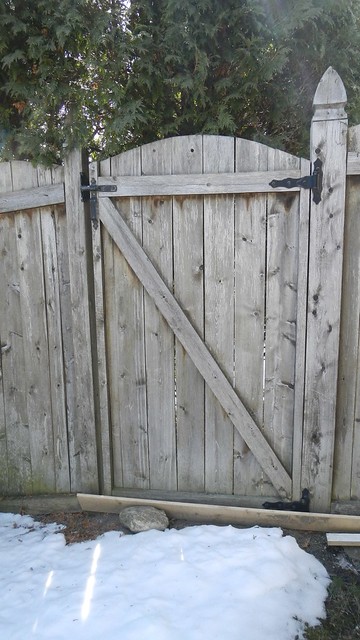 There was a pergola in the backyard that we did not purchase, so it left. But it left behind these exciting steel spikes that are embedded in the ground at the perfect height to trip you up and then poke your eye out when you fall on another one. 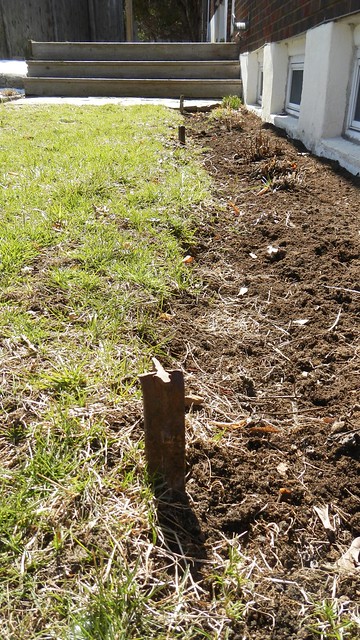 Especially this one that is at the bottom of the steps. I look forward to severely injuring myself on this one. 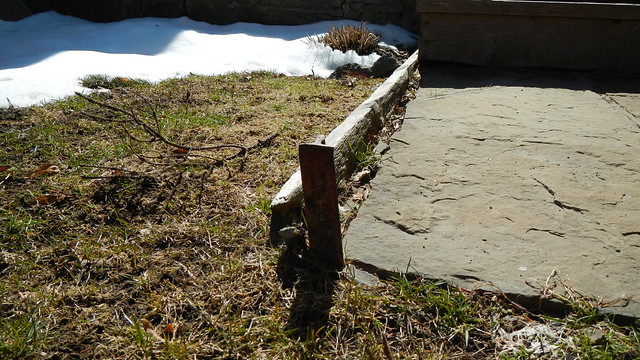 Remnants of pergola town. I’m going to pry this random square up and re-seed the whole lawn. 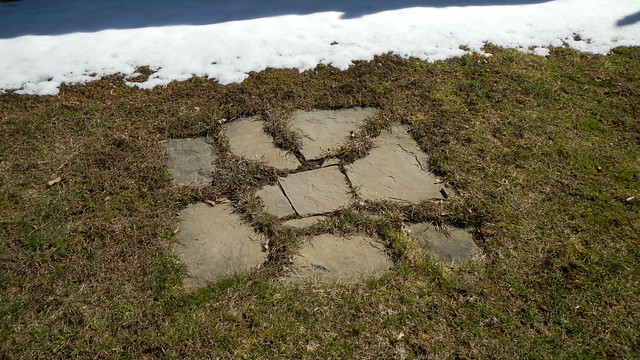 The tiny deck off the backdoor has no railings down the steps and also hovers over a retaining wall with a two-foot drop, so it’s only a matter of time before someone falls off it. Probably me. Also the wood is rotten and needs replacing. 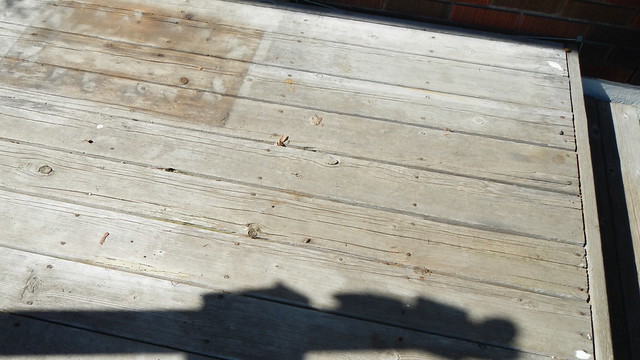 Oh and look, another horrid hedge. This one is being held up by that odd assortment of concrete and wood. And it’s definitely making forays into my foundation. Also coming out ASAP. 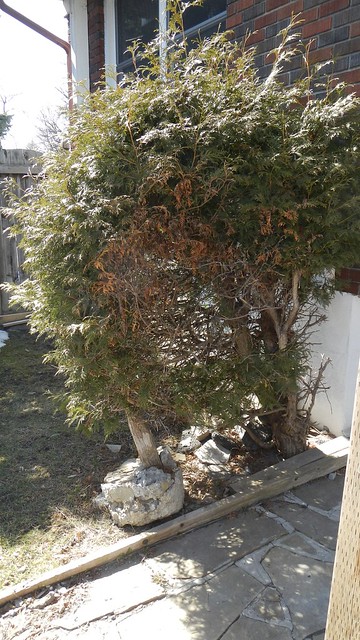 I don’t even want to try to talk about my garage. Waiting for a day when it’s warm enough I can work in there with the door open. Which, at the rate this Canadian spring is going, might not be for some time … 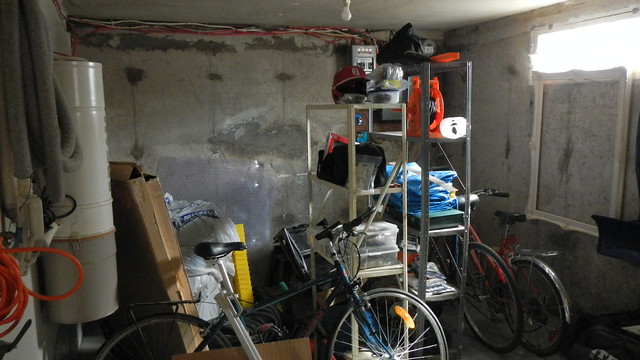