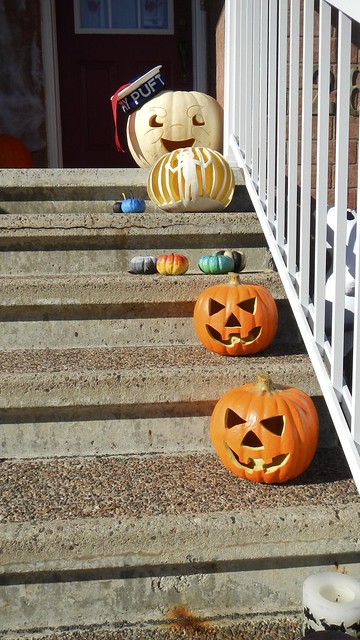 We’re excited to spend our first Hallowe’en in our new place – there are tons of kids everywhere, so we went all out. They’re predicting rain for today so I’ve only put up half of our decorations for now. We can’t wait to have our own house with a big front yard that we can fill with all kinds of spooky spectacles. 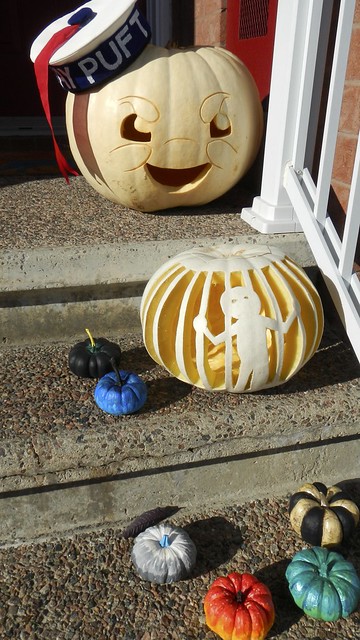 I have some red lights to put in the chest cavity of Skully, our skeleton. 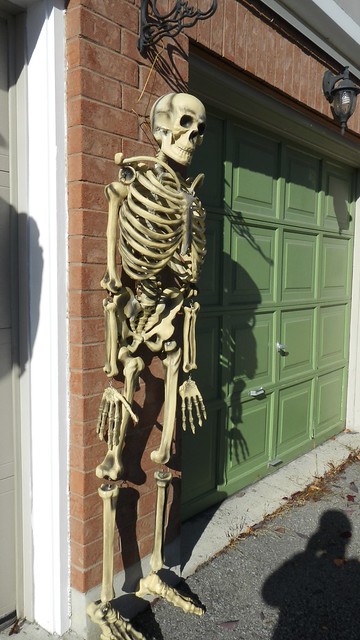 I’m especially pleased with the pumpkin this year – I got a ghost pumpkin, the white kind, and made it into the Stay-Puft Marshmallow Man, the evil villain from Ghostbusters, one of my favourite movies of all time. 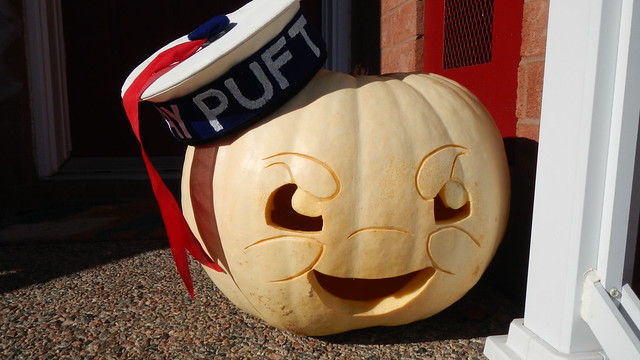 And my fall leaf wreath is seasonally fitting as it decays. 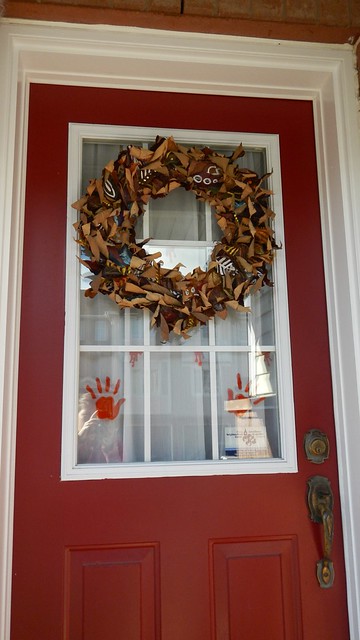 Our Hallowe’en party isn’t until tomorrow, but the Pie STILL doesn’t have his costume ready (TSK!). I’m going as a gorgon, as the party is monster themed. Because I have short hair, I made a hat of snakes to look like my actual hair. I used Model Magic because it’s flexible and lightweight. I named myself Zola, so I could introduce myself as the Gorgon Zola (like the cheese! Get it? GET IT?) 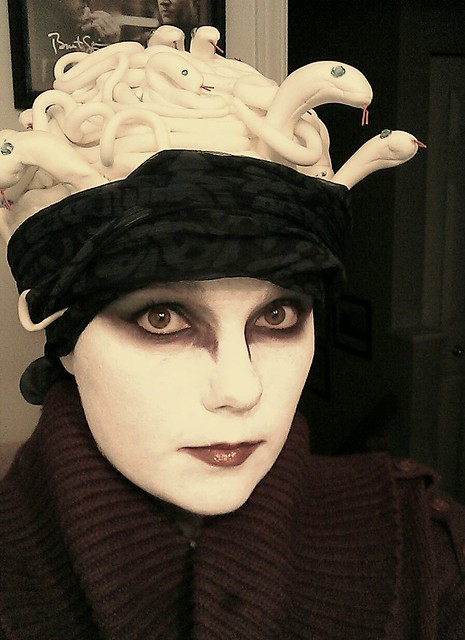 This is WAYYYY less itchy than that horrid beard I wore last year (though I did win best costume because Wolverine is awesome). 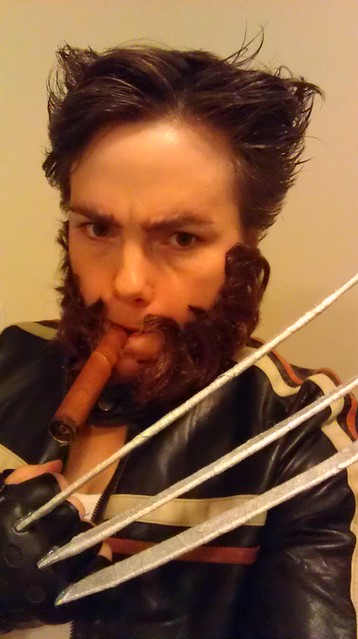 Have a safe and happy Hallowe’en!

Or, to be more precise, I challenged the Pie to a pumpkin-off.  You see, we don’t really get trick-or-treaters on our street.  Like, at all.  So we long ago gave up on decorating for Hallowe’en.  But carving pumpkins is just so much fun.  I used to get really elaborate with mine as a kid, using those tiny knives to get tiny details and scraping away layers of pumpkin to create a translucent layer of orange pulp.  The Pie, on the other hand, says that traditionally he had two pumpkin styles: one with two pointy teeth, and one with one snaggle-tooth.  And in eight years together we have only carved pumpkins together once.  So why not do so now?  We won’t have anyone to show them to, as we don’t get trick-or-treaters here on Elizabeth, but at least we’ll get to enjoy them.

Some tips for happy carving:

Give your pumpkin a good scrub to loosen dirt and other unmentionables (they come from farms, people), especially if you’re planning to eat the contents.

Cut your “lid” just slightly larger than your fist, and cut the sides at an angle so it stays in place.

Scrape the inside flesh as thin as possible, leaving maybe 1/2″ behind.  This means that you get to keep most of the flesh for cooking without having it left out to spoil.  It also makes it easier to do more detailed carving.  And to add to that, if you’re going to go for the translucent look, where the light shines through the pumpkin flesh, it’s a good starting point for thinning the flesh to where you want it. I find a metal spoon works really well for good scrape-age.

We had three separate bowls going while we were carving, to save us time later on. One was for the pumpkin seeds, another for usable/eatable flesh, and the third for scraps and bits of skin we couldn’t eat. Gren thought all of them were for his personal consumption and was quite put out when we wouldn’t let him have more than a few pieces to himself. I guess after a puppyhood of digestive issues where we gave him pumpkin on a regular basis, he’s developed a taste for it.

Also, it’s a good idea to go into pumpkin carving with a plan. The Pie and I took two different routes: he went with a stencil of Spider-Man, and I free-handed an approximation of Grenadier. So he was going to scoop out all the black stuff on his, and on mine, the black stuff is untouched pumpkin skin, the gray is scooped out but not cut pumpkin flesh, and the white is entirely cut out pumpkin.

The Pie taped his design to his pumpkin, making sure to cut darts in the sides so it would fit on the curve.

Then he set to work with a wee punch, poking holes around the edges of his design to use as a guide for cutting later on.

Then he started peeling off the skin of his design with a sharp knife. You’ll note he kept a copy of his stencil by his side so he could remember which parts he was supposed to cut and which parts were negative space.

I drew my design directly onto my pumpkin skin with a pencil. It doesn’t leave a huge mark, which is good if you decide to change your mind later on. Which I did.

Then I started peeling and cutting, according to my plan, which I kept at my side.

Can’t say the finished product looks much like the subject, though.

When we got to a certain stage we started testing the translucence of our pumpkin with LED tea lights stuffed inside. It’s a simple matter to scrape away more of the flesh from the inside and out. I went with a bit of texture on mine to emphasize the fuzziness of my hound. It does show up when you look at the lit pumpkin up close.

So here’s my finished pumpkin, from the ears angle:

And from the tongue angle:

And the Pie’s, from one angle:

And a bit closer:

I made Gren pose with the finished version of him. He was not amused.

And who won the pumpkin-off? Well, Gren seemed to like mine best, as he kept licking it. So I’m going to take that as a vote for my side.

Plus we definitely plan to have some posts in the days following Hallowe’en about the things you can do with your carved pumpkin.  Stay tuned!

You’ll see more about this in my post tomorrow, but the Pie and I have entered a contest over at Movita Beaucoup.

Please feel free to vote for my pumpkin and not the Pie’s.  But if you like his better then I guess it’s okay if you vote for his …

And as a reward, see this corgi that isn’t mine but is also awesome.