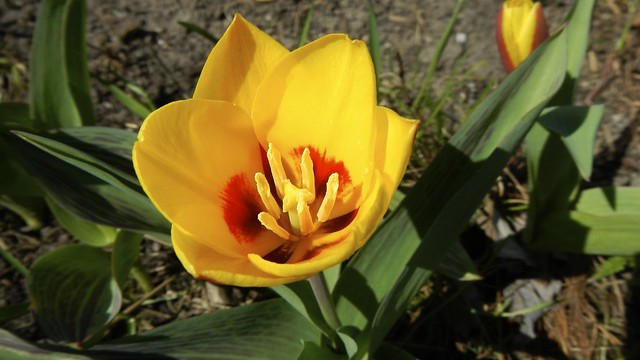 Sorry for the cheater post, but we’re moving tomorrow and I have a birthday cake experiment to attend to.

The trees are still bare, and there are some holdout snowbanks scattered around, but Gren no longer comes home from the park in need of an immediate hose-down. 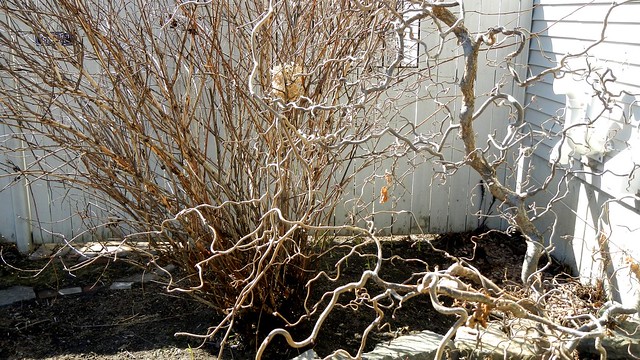 The local starlings have already started to build their nests in my neighbour’s decrepit roof. Reminds me of the starling family that lived in our bathroom ceiling in St. John’s for three years. 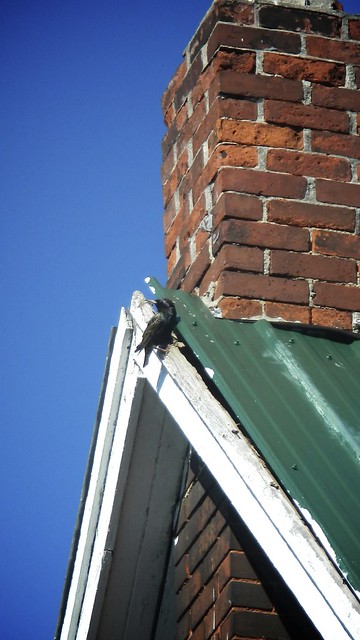 It’s not very warm — in fact, local horticulturists here are warning gardeners to hold off on spring planting in Ottawa until the beginning of June.  But the grass is starting to turn green, and the bulbs are starting to put forth leaves. 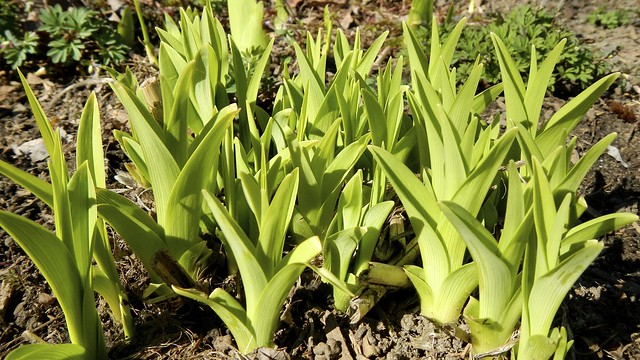 And in some cases, even flowers. 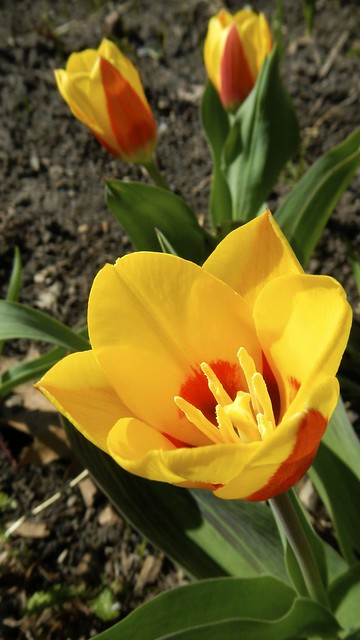 And stuff I planted late last fall in a haphazard manner in the middle of a storm is even growing. 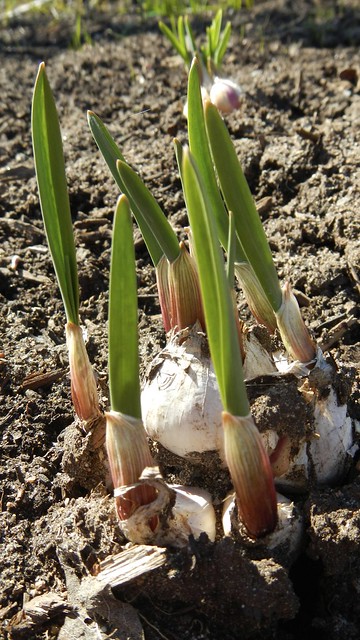 This will be rhubarb soon.  That means pie.  And crumble.  And fool. And beverages. 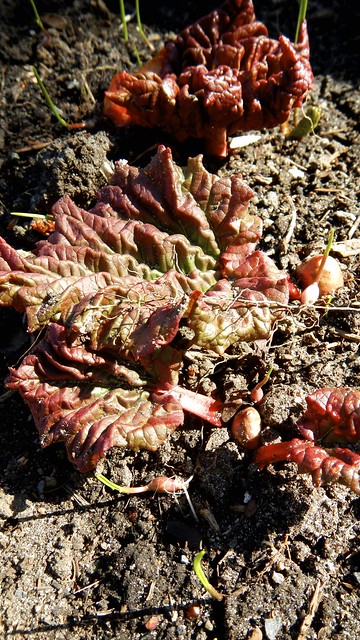 And irises in Ontario grow much better than the ones I had in Newfoundland. 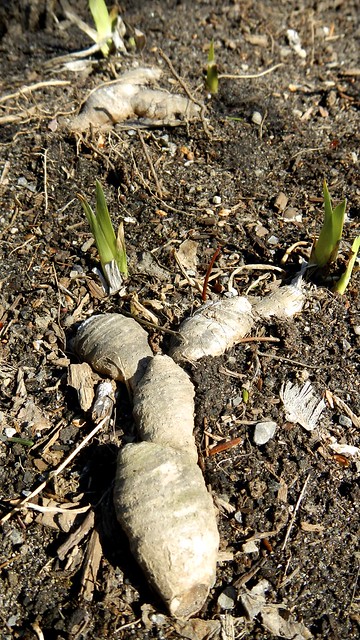 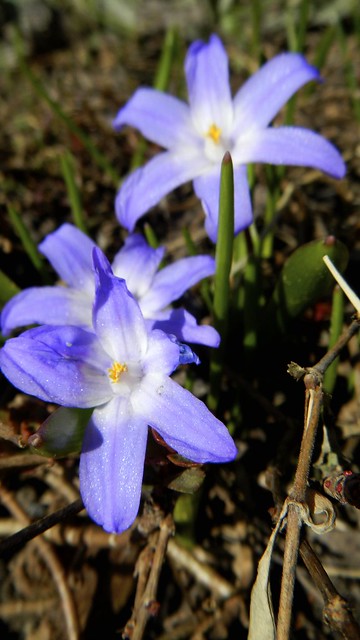 Moving day is drawing near and we are experiencing our final summer here at Elizabeth.  And that means that it’s the final year of my first ever solo garden experiment.  If you’ve been following along, you’ll know it hasn’t exactly gone as planned, but I have reaped some benefits.  My delphiniums, the only plant I have ever successfully grown from seed, have survived the construction crew burying them in tree branches and should be in full bloom by the Pie’s birthday (they are his birth flower after all).  The irises my mother sent me that have been churning out bulbs for almost thirty years are finally blooming, as is the accidental wild rose bush I found out back one year and cut entirely down by mistake (the fact that it only started to bloom after I cut it to the ground tells me I did something right).

And the peonies that I rescued and have been coddling for years are having a bountiful year.  Instead of the usual one or two blooms I now have over a dozen (before you pooh-pooh that, remember this is Newfoundland and my backyard is 100% shade).  So I figured I’d cut some down (before they fell) and haul them inside to enjoy, together with a few of the roses trampled by construction workers, and a sprig or two of the noxious weeds that strangle the rest of my flower beds (may or may not be, or related to, Queen Anne’s Lace — jury is still out and I don’t really care).  I may have packed all my vases, but a travel mug does in a pinch.  Happy summer!

My mother sent these iris to me about four years ago, in the mail.

I planted them according to her instructions (which is to say, I sort of set them gently atop the soil and hoped they wouldn’t wash away).  And I waited.

Every year, the leaves would grow tall and green.  But no flowers.

This year, the year I have given up on my garden officially (too many rocks, too many weeds), this year they decide to bloom on me.  Just in time for my mother’s visit, thankfully!

These iris are descended from a batch of iris given to my mother by a friend about twenty years ago.  They have traveled back and forth across the country a couple times.  When I leave Newfoundland I will likely take them back home with me.  That’s just how we roll in our family.  My mother has already taken a chunk of my garden home with her on this visit to keep it going until I get there.

I made a wedding cake this weekend.  And it is AWESOME.

Unfortunately, I’m too tired to post about it right now so you’ll have to wait until Wednesday.  And actually, at this very second I am preparing to hurtle at 650km/h across the North Atlantic to return home to the Pie and Gren.  So some patience, please.

My parents’ garden is in rare form this year following a chilly, wet spring, so of course any excuse to cut some of the lovely flowers and bring their delicious scents inside is a good excuse.

This is a centre piece I made for a dinner with my Uncle Squeaker.  Peonies, my favourite flower in the whole world, make for great arrangements.  You can keep them tall and elegant in a huge wide vase or cut them off completely to float them in a bowl.  They’re just the best.

Here, however, I cut them short and stuck them in vintage canning jars.

I even stuck one in my great-grandmother’s coffee jar.

Then of course some iris in old medicinal tonic bottles to add a bit of height to the arrangement.

And that was it.  Don’t let not having a big vase stop you from making a big (floral) statement.

Can you believe it?  It was sunny!  I haven’t been in the garden since the Pie and I raked up all the leaves and I laid down the Slug-B-Gone (which, incidentally, seems to have worked).

The consistent rain has meant that my weeds are flourishing.  I spent a good two hours just digging them out.  This particular weed will be the death of me.

It’s completely overrun the horrible hedge in the front, and it creeps through the fence in the back.

On a positive note, my peony is going strong, as is my astilbe and my columbine.  However, columbine seems to be a weed here so I’m not surprised it’s doing well. I actually divided the columbine and planted some of it in the front yard to soak up the sun.

It’s good to see some new growth on my boxwood.  I thought they might have lost it this year.

My lavender from last year has survived the winter, just barely.

Another nice surprise is that the two straggly clematis that made it out of the seed stage last year seem to be flourishing this year.

As you can see the daffodils are in bloom, though they get damaged easily by the winds here, and the tulips will bloom soon.

The iris are struggling back from their battle with the slugs.  Maybe we’ll see some of those bloom by the end of the summer, who knows?  I laid down some more Slug-B-Gone, as I saw a few slimers while I was weeding.

Now that the frost season is officially over I’m going to start trying to plant some things.  I figure the slug bait and the lack of snow might stand me in good stead this time around.

The weather and the fates conspired against me and I was not able to go out into the garden until MONDAY evening.  It’s shameful that “Day One” and “Day Two” should be so freaking far apart.  Stupid Newfoundland.  Spring just does not exist here.  In fact it’s supposed to snow Tuesday.  Of course.

Anyway, I did my raking.  The Pie helped tremendously even though he loathes gardening.  Otherwise it would have taken FOREVER.

Here’s the during.  It was the Pie’s idea to put all the leaves on a tarp and drag them to the leaf heap behind the shed.  It was sheer genius.

He grew up in a forest and is thus familiar with such brilliant leaf transport methods.

Here’s the after.  Admittedly it’s rather half-assed, but at this late point all the leaves have disintegrated and are impossible to rake.  The Pie says the rest of them will disappear the first time he mows the lawn.

I hope to have better luck with the slugs and snails this year.  As I’m sure you noticed with my Rodentia posts that I’m not a huge fan of needlessly killing living things that have done me no personal harm.  But these slugs and snails, they’re everywhere (and I mean everywhere), and they’re costing me money (that I don’t have) in replacement plants. My young plants have no chance to grow before they’re literally nipped in the bud by the slimy suckers.

And you can see that the slugs have already had their way with my tulips.

They’ve eaten all the buds on my iris as well.  I nearly raked up the iris while clearing out the beds due to their tenuous grasp on the soil.  I hope they don’t die.

So I caved and bought Scott’s Eco-Sense SLUG-B-GON at Canadian Tire.  Because the name is AWESOME.

But actually because the bait just stops slugs from eating once they eat it, and uneaten bait is safely absorbed by the soil, safe for other animals, children, pets … all that jazz.  I’m excited to test it out.

As far as the actual growing of things goes, I got nothin’.  The tulips, iris, and daffodils are doing their regular thing, but haven’t yet bloomed.  I’m trying to get a cutting from my indoor palm to root to give to Kª, and I’ve started trying to root some avocado pits as well.  If that works I’ll give you a little how-to.  In the meantime, we just wait.

I have been doing my research, however, and have come up with a list of perennial plants that are supposedly hardy here on the rock (shallow, rocky, lead-filled soil) and which I wouldn’t mind having in my garden:

Hosta (though the slugs had their way with them last year)

Laburnum (which actually grows in huge trees next door)

Poppies (we had some success last year.  I’m hoping they appear again.)

The goal with this garden is to plant all this stuff and set it up so no one has to work on it while I’m gone on my fieldwork term.  Easy peasy is the key here.  Any suggestions (or cuttings!) would be most appreciated, just put your comments below.

***EDIT: I’ll have you know it has snowed TWICE since I wrote this.  The last time it snowed was yesterday morning.  Oh Newfoundland … ***