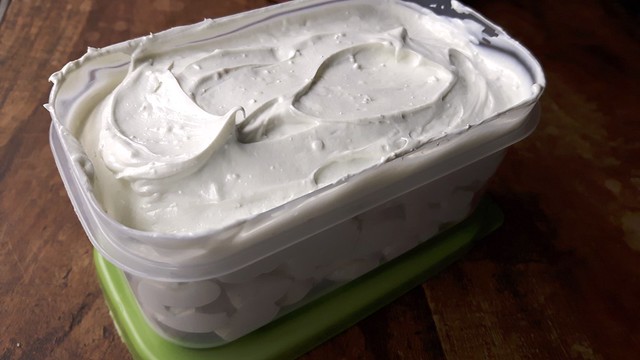 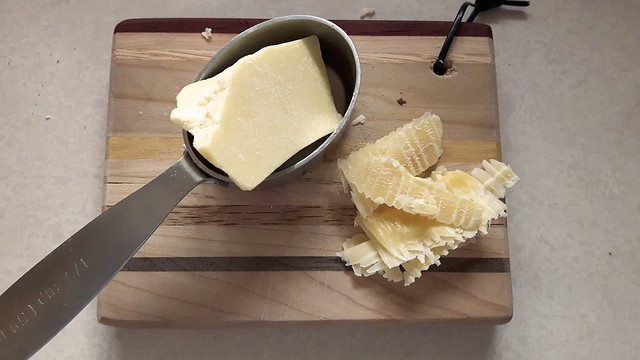 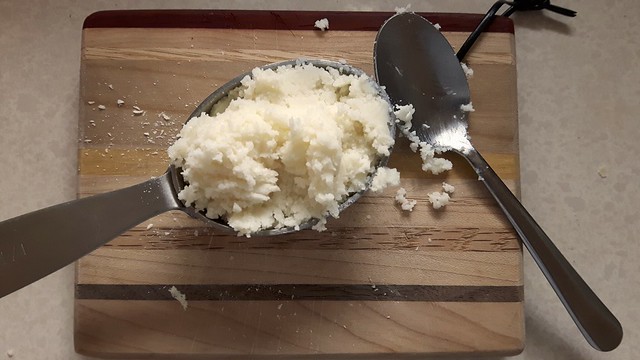 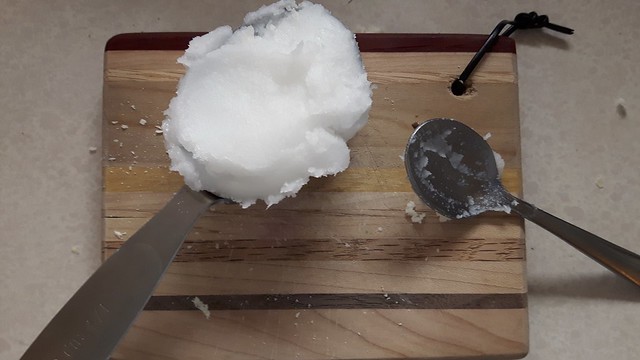 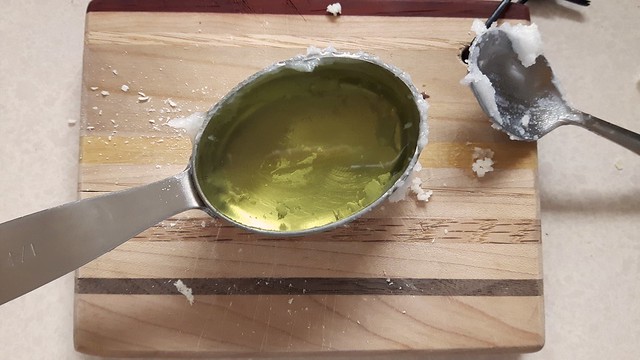 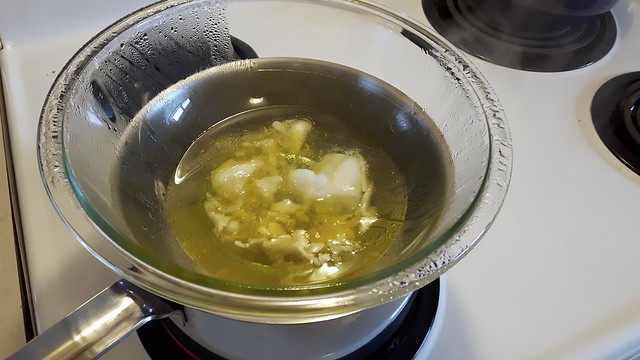 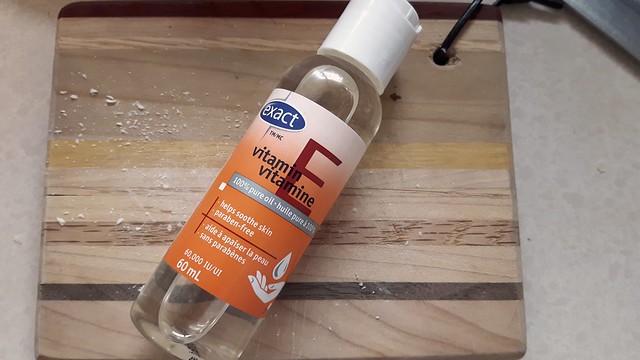 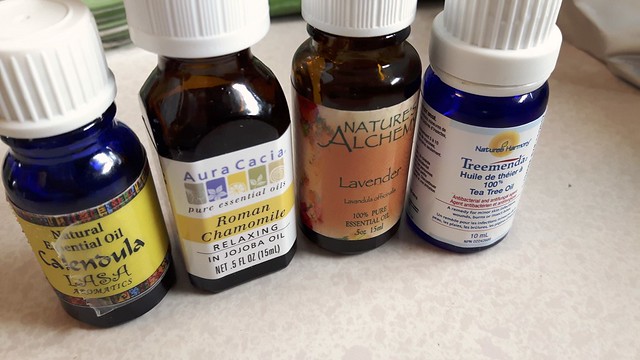 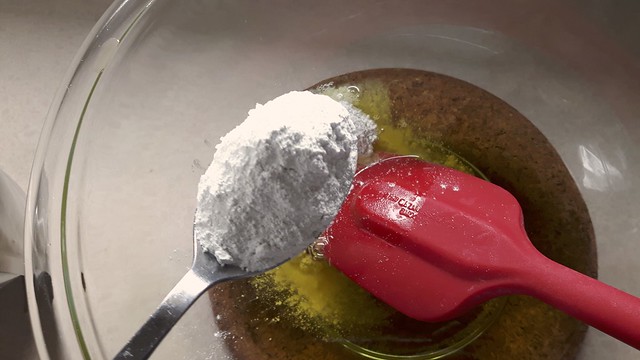 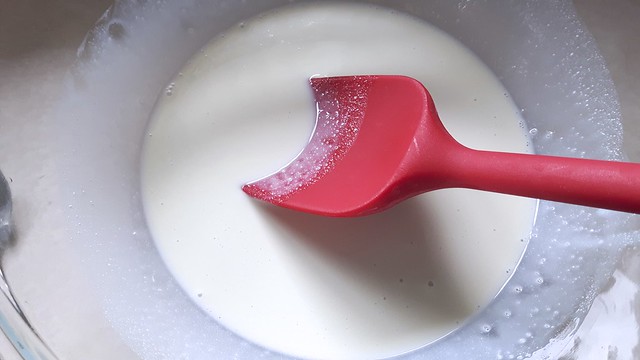 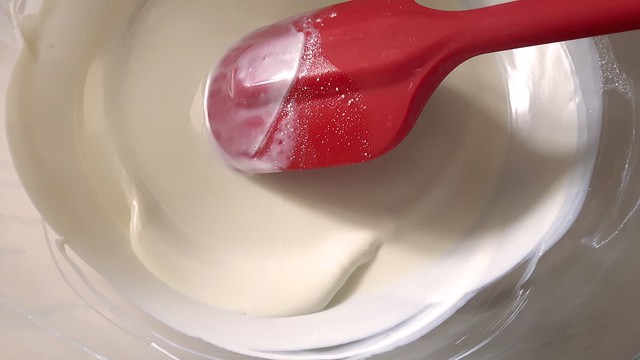 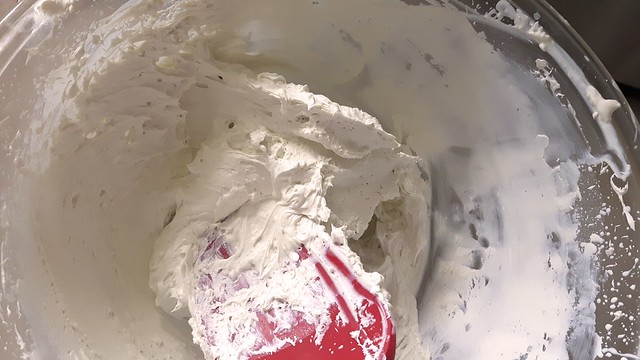 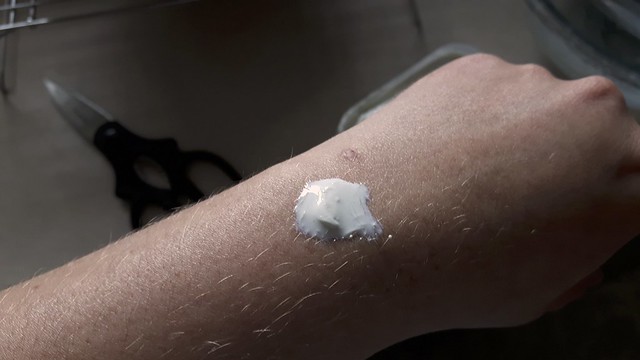 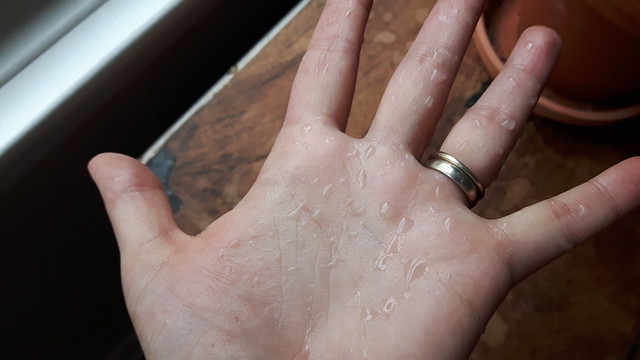 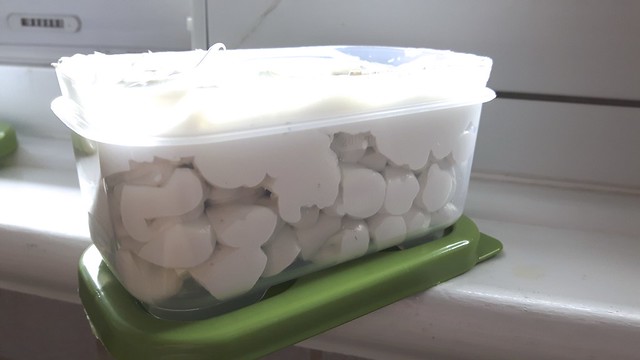 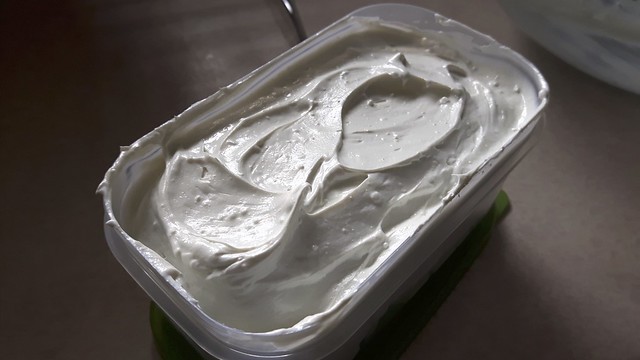 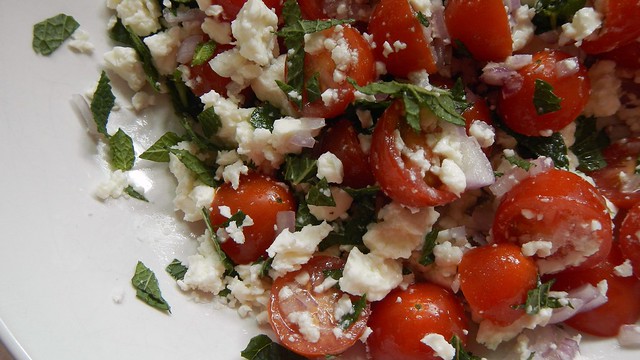 LongJohn’s Nana, Mrs. Nice, has been coming into town to spend some time with him once a week so that I can do things that necessitate the use of both hands (in fact, she’s here right now so that I can use both hands to type this post – yay for Mrs. Nice, and grandparents everywhere!).

When she was here last I whipped up this salad of things that were in my fridge: normally when I make a tomato salad with feta I use balsamic vinegar and fresh basil but I didn’t have either of those so I went with a little twist, and I hope you like it.

Start with some tomatoes, naturally. I’m using grape tomatoes here but you can use whatever you have. 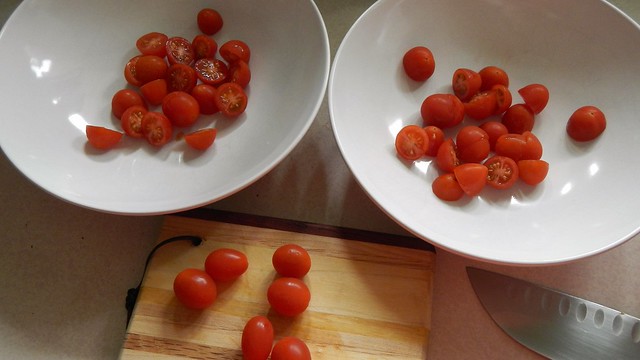 Then, finely chop up an onion. This is a shallot. A red onion would also be nice. 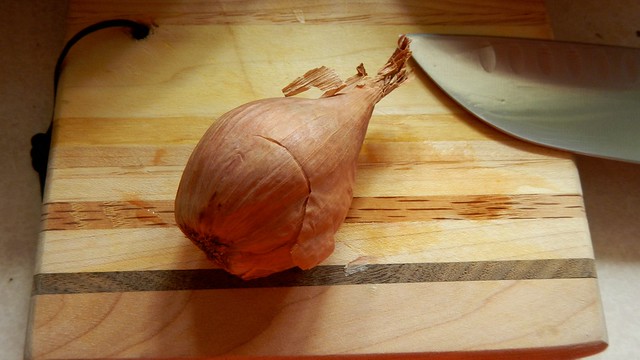 Nice and small. We want the IDEA of onion rather than holy-wow-there’s-a-lotta-onion-in-this. 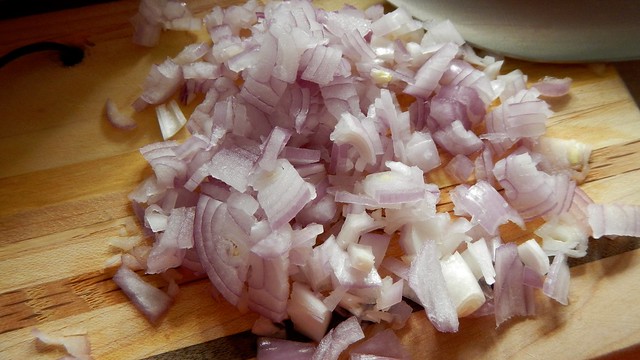 Grab some mint. I grew this monstrosity from three stalks I got out of a box at the grocery store. 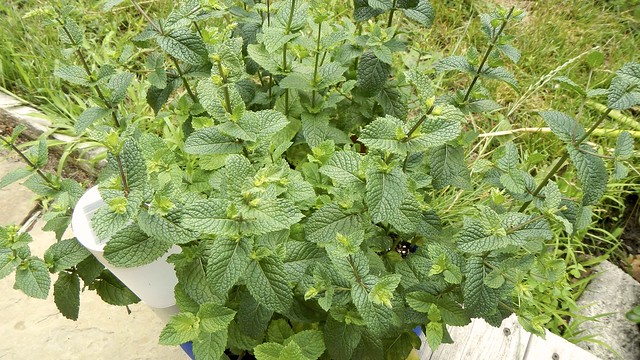 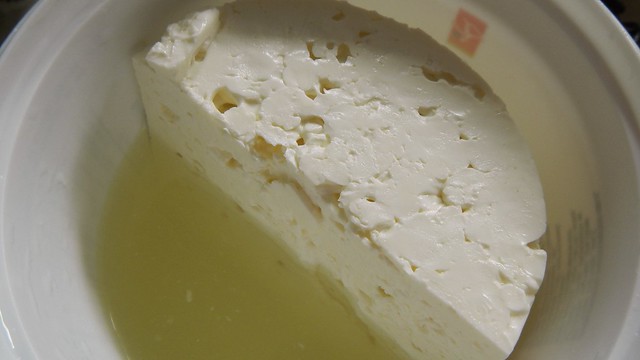 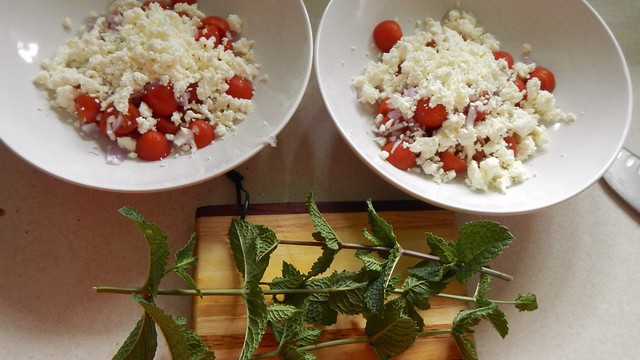 I made a dressing out of grapeseed oil, honey, and a bit of lemon juice, and drizzled it over the whole shebang. 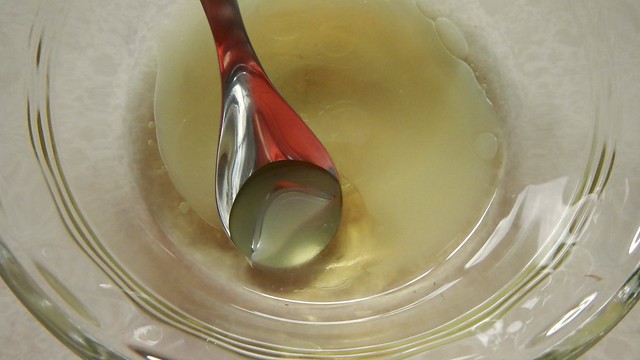 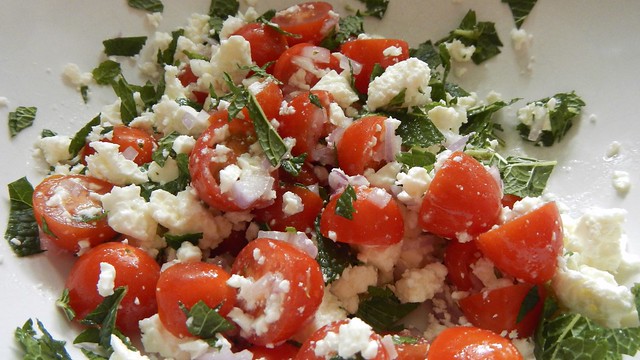 This is a recipe for gluten-free almond chocolate chip cookies.  I found it in Thursday’s issue of The Ottawa Citizen, where it was referenced to the California Almond Board.  Can we get more complicated?  Surely.  These cookies are also touted as a great energy snack after a workout (a cookie?  Really?).  Whatever they are, they’re gluten-free, egg-free, refined sugar-free, and, if you use carob instead of chocolate, then they are also dairy-free and vegan.

So I figured I’d bake up a batch and try them out on my collection of captive guinea pigs — in this particular case, the Pie’s fighting game community, which meets every Sunday.  I’m sure that the last thing they need is more energy, but whatever.  They are good at ensuring the Pie and I are not left alone with too many cookies to eat by ourselves.

Preheat your oven to 350°F and line two baking sheets with parchment paper.

In a large bowl, whisk together 2 1/2 cups almond flour (I did half coconut flour and half almond meal, because that’s what I had and I figured that the recipe actually meant almond flour, which is a finer grind, and not almond meal) with 1/2 teaspoon salt and 1/2 teaspoon baking soda.

In a smaller bowl, whisk together 1/2 cup grapeseed oil (regular canola or sunflower oil will do as well), 1/2 cup agave nectar (available at any health food store and many grocery stores — it’s basically sweet cactus sap, and they also make tequila out of it), and 1 tablespoon vanilla.

I’ve finally busted open the home-made vanilla that Ando and Teedz gave me a couple Christmases ago.  It’s excellent, and I can just keep refilling the bottle to get more and more vanilla.  Fantastic!

I’m not sure if I had to do this, but I whisked the ingredients thoroughly together until they formed a lovely smooth and thick emulsion.

Pour the wet ingredients into the dry ingredients and make sure they’re thoroughly combined before folding in 1/2 cup dark chocolate chips and 1/2 cup sliced almonds.

I didn’t have any sliced almonds so I just used some raw almonds, which I then toasted and crushed myself.

Using a tablespoon, drop the dough onto the parchment sheets and press down on the dough to flatten it a bit.

Well, that’s what the recipe said.  I had a hard time keeping mine together so I found if I used my hands and mashed them hard into little patties then I had better luck.

Bake those puppies for 7-10 minutes, until golden, before removing from the oven.  Let the cookies cool on the baking sheet for about 20 minutes before you try to peel them off.

This recipe had potential, but it fell far short for me.  The cookies turned out a little burnt on the bottom despite me only cooking them for 7 minutes, and they were so very, very dry.  If I were to make these again (and I might), I would nix the oil and substitute in about 1/4 cup butter, salted (which means leaving out the salt in the recipe) and then 1 large egg instead.  If you still want to pursue the vegan route you could also substitute in some apple sauce.  In fact, I might add in some anyway, in addition to the butter and egg.  There simply was no glue holding this baby together.