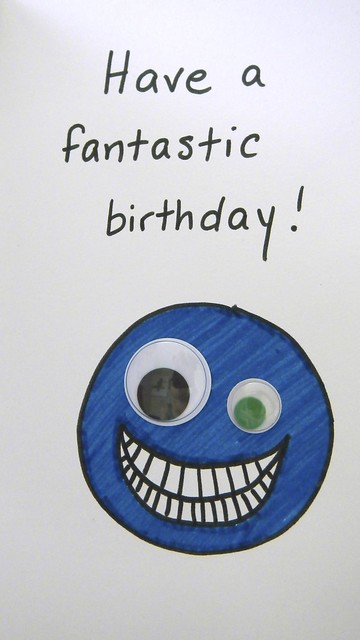 The eyes have it, folks. Feel free to take this idea (rather poorly  executed on my part, after LongJohn was in bed) and run with it for your next greeting card. 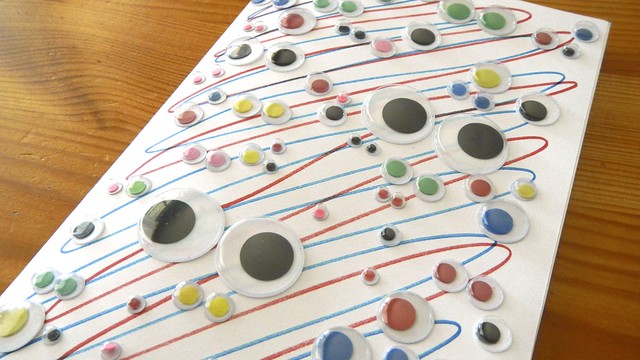 Step one: acquire googly eyes. These came from the dollar store. 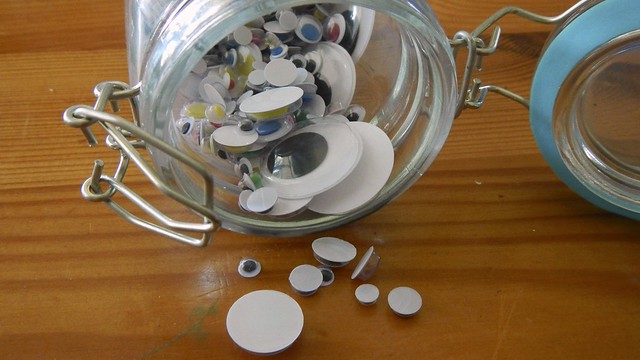 Step two: come up with a pun that can be properly appreciated by a one-year – old (or a fifty-one-year-old). 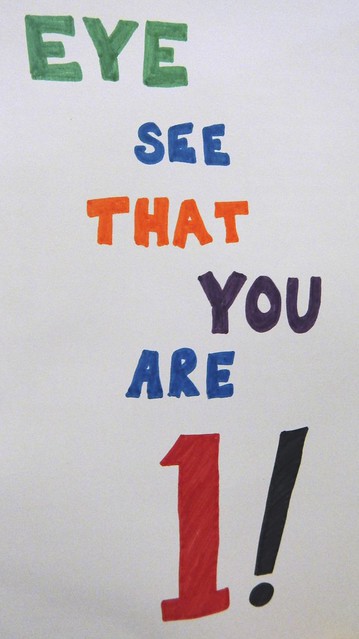 Step three: apply both to card stock. I hope you have better drawing skills than I do. 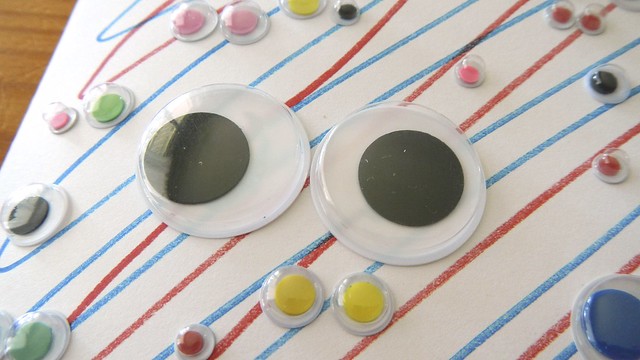 I have some bigger projects in the pipe for you – now that I’m getting a bit more sleep I can actually think up some stuff – but strangely, when you have a baby in the house these projects tend to take a bit longer than they should. So stay tuned! 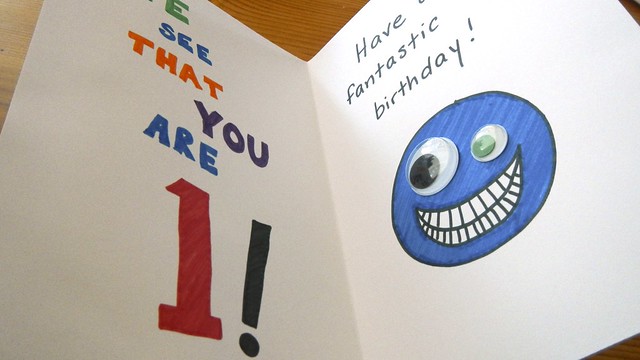 As you may remember, I recently entered Movita Beaucoup’s pumpkin carve-off 2012.  I didn’t win.  It was very upsetting to me.  But all is not lost.  Movita also holds an annual gingerbread house contest.  And I’ve had this idea that’s been percolating in my wee brain meats for some time.  And I think I just might pull it off.  When I mentioned the idea to Cait over Google Talk, this was how our conversation went:

me: so the lady who does the pumpkin carving contest also does a gingerbread house contest
but I was thinking, what about an igloo, made of meringue? with a yeti attacking a camp full of ninjabread men?
Cait: ahahahahaha
do they make edible googly eyes?
me: no but I could pipe in googly eyes
terror and dismemberment
Cait: http://www.evilmadscientist.com/2008/one-hundred-percent-edible-googly-eyes/
me: I HAVE THOSE
Cait: YOU MUST DO THIS
IT IS THE ONLY RIGHT THING TO DO
me: THEY WILL FIT IN THE MERINGUE PERFECTLY
Cait: you’ll have to submit a video proving their googliness
me: totally
oh man
Cait: i think you won the contest before it even started
me: aside from not following any rules, I am so going to win this.
Cait: rules are for chumps
me: I’ve actually been thinking about this for weeks
Cait: i can tell
me: have I mentioned that this is one of the many reasons I love you?
Cait: ahahahaha i want to eat your ninjabread men
i don’t see how they could top this without having lasers and stuff
me: I’m going to quote you on that
Cait: maybe you could make it glow in the dark too
like under a black light
giving the internet its greatest ginger bread house ever
me: I wonder if egg white glows naturally?
Cait: on tv on those crazy baking shows i think they use alcohol or tonic water?
it is tonic water
http://media-cache-lt0.pinterest.com/upload/97882991872109887_8t24pxdz_b.jpg
SO CUTE
me: but then it wouldn’t taste good would it?
Cait: you’d have to experiment. it may not take much to cause that to happen… i don’t know.
i am not a glowing igloo scientist
also they can’t taste it on an internet contest.
me: find me a recipe for glowing meringue
I just don’t see how the tonic water fits into it
Cait: oh well google says tonic water has quinine which glows brilliant blue under black light
and so whenever they make glowing whatever on baking shows they use tonic water
and it glows
so make some test meringue, brush that s**t with tonic water, or sprinkle, or whatever
and then stick it under a black light for science
me: you know, I could use it in the slurry i’m making with cornstarch, which will stabilize the meringue
Cait: i mean people’s minds will be blown by the googley eyed ninja bread men
but BAM the damn thing glows
i don’t even know why anyone else would bother entering

me:  don’t forget the yeti

So you can see how this woman completes me in every way.  Long story short, this is what we’re doing.  And by We I mean me and a slightly-less-than-willing Pie, who, as Cait says, does not understand our vision.  And Cait will be offering moral support over Google Talk as she concocts a contraption for Ruby. I wish my computer could always be in the kitchen …

Before we got started I wanted to lay out my supplies.  I needed a piping bag (I used a plastic one with a piping tip stuffed in one corner), and my baking sheets lined with parchment paper.  I also needed some form of structure for my igloo, so I grabbed a metal bowl that looked like it was the right size to fit the ninjas I had in mind.

It was kind of an origami fest getting the parchment to cover the bowl in an appropriate way.  I used freezer tape to stick stuff down — on the non-meringue side, of course.

Then I made a little door as well.  I hope this works.

As we know, the first trick to making meringue is to bring the whites to room temperature, so I did that with 8 egg whites (wash out the shells and keep them for later).  And rather than use my usual method, which produces a beautiful, flaky and delicate meringue, I modified this recipe, which involves stabilizing the meringue with corn starch.

In a small saucepan, combine 1/3 cup granulated sugar and 1/3 cup cornstarch.  Whisk it up until you are sure it’s well mixed.

Whisk in 1 1/3 cups tonic water (I let mine get flat so the bubbles wouldn’t interfere — if you don’t want yours to glow you can use regular water) and heat over medium, stirring constantly, until the mixture is clear and thick, kind of like petroleum jelly.  Remove that from the heat and allow it to cool.  If you do it for too long you end up making plastic.  I’ve definitely done that before.  The science of it is pretty neat but it’s a pain to clean.

I also made some royal icing to use as glue for later on.

In a large metal or glass bowl (copper apparently works the best), plop down your egg whites, 1 teaspoon cream of tartar (another stabilizing acid), 1 teaspoon salt, and 2 teaspoons vanilla extract (who knows, these could end up being tasty).  Whisk that up until it gets all nice and foamy and soft peaks form.

Then, a tablespoon at a time, add in 1 cup granulated sugar.  The sugar, if you add it slowly enough, is another stabilizing agent.

Add in slowly as well that gross vaseline-like stuff you just made.

Whip that silly, until you get a nice opaque, shiny mass with stiff peaks.  The best thing about meringue is that unlike whipping cream, which relies on fat to stabilize, you can’t overwhip this stuff. So if you’re not sure, just keep going.

I think we’re ready to go here.  Preheat your oven to 225°F.  The cooler your oven is and the longer you bake your meringue, the drier and crisper it will be.  And we want to do this right.

I had a lot of meringue to work with, so I did some experimenting, shoving the meringue in a freezer bag with a piping tip jammed in the corner, I tried out different shapes, scrapping what I didn’t want.

I ended up making three yetis, and a tree.  And some blobs.

And signing my name.  If I’d dyed this with vitamin B12 it would have come out yellow, and I could have done the ol’ yellow snow joke, eh?

And the igloo itself. I originally piped on the meringue, but I didn’t like it.

So I used a spatula to smooth it out.

Then I baked them for about 3 1/2 hours (because there was so much stuff in the oven), and when they were done I turned off the oven and let them sit in there until the oven was completely cool.  Only then did I attempt to remove the parchment paper.  This is why I made more than one of everything.  Well, except for the igloo.  That was enough of a pain in the ass.

I know you’re saying, what’s a gingerbread house without gingerbread?  Well, this is a meringue igloo, so it’s not complete without ninjabread men.  Am I right?  Cait gave me these cookie cutters (by Fred & Friends) when she and Jul were here this summer and so I relished the opportunity to use them.

I won’t extend this post still further by walking you through the ninjabread process (because really, the point of this exercise is in the meringue igloo, people), but I’ll show you a few that we decorated, and I got the recipe from here.

Yes, I really do suck at piping icing.  I just don’t care enough to get better at it.  So deal.

I also just happened to have some empty gelatin capsules on hand, so took the opportunity to make edible googly eyes for all my participants.  If you’re interested in doing this, you can get the capsules from drug stores or health food stores, but you might have to call around.

So you take your capsule and you carefully puncture a hole in the end of one of the halves with fine pointy scissors (or a sharp craft knife or razor blade), then cut around until all you’re left with is a wee dome.  Do that to the other half of the capsule as well.

Now you need eyes that google.  I found these sprinkles at the grocery store, and they will make handy eyes — in pretty colours, too!

Use an empty capsule to make indentations in the meringue to hold your eyes, then jam the eyes in the indentations you made.  Make it go in far enough that it stays, but not too far that the eyes aren’t all wiggly.  I don’t know why it’s important that my eyes are googly here in a still photo, but it just is, darnit.

For the ninjabread, I glued them in with piping gel.  It meant they weren’t very googly, but this is a still shot anyway.

And now the setup.  Fortunately everything I have here is very lightweight, so I just set everything up on a piece of cardboard.  For the “ground” I used jumbo marshmallows that I cut in half.  The stickiness of the marshmallow made excellent glue for keeping it attached to the cardboard.  I also snuck a few of those empty egg shells in there, glued down with royal icing.  Egg shells glow pale pink under black light. I thought they might look a little like very subtle snow monsters. Then I set everything else up, using toothpicks and royal icing to keep everything in place.

And here we have our scene of mayhem and terror: poor ninja researchers travel to the Canadian north, only to be set upon by the very creature they came to study: the elusive yeti.

Yeah, I know.  It’s not the handsomest design in the cold light of day.  It looks like a hungover drunken science experiment.

And in the dark?  Well, I’ll let you reflect on that by yourself.  I never really thought this would ACTUALLY work.  BUT IT DOES!  It glows in the mother-freakin’ DARK!

The eggs don’t glow as pinkly as I wanted them to, but it was, indeed, very subtle.