Check out this bowl I made. It’s got a definite slouch to it. 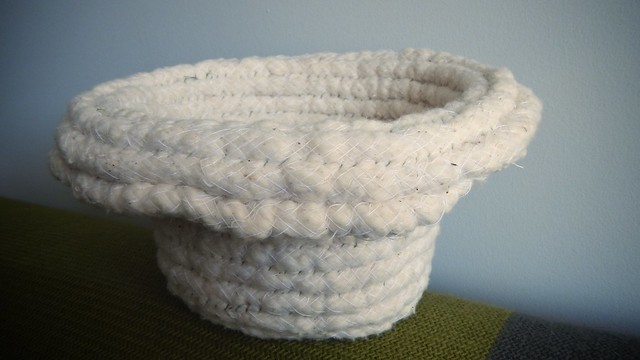 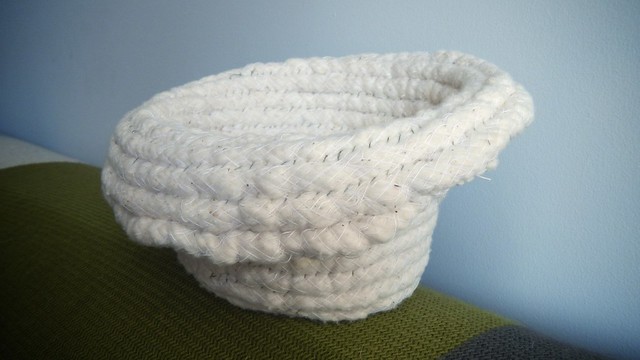 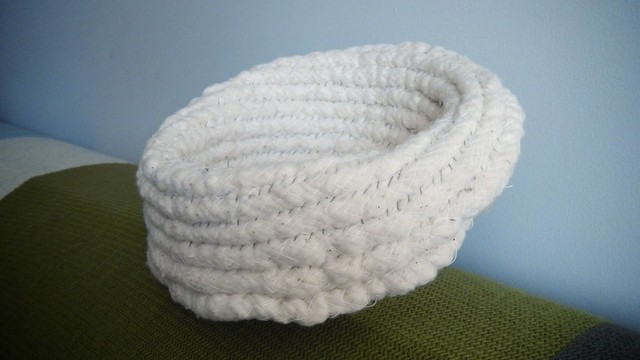 My mother had given me a wad of the squishy rope you put inside piping when you are upholstering things. It’s essentially a wad of unbleached cotton loosely held together with a bit of white thread. I didn’t know what to do with it (me? upholster? you gotta be kidding.), so I made this bowl. You could also make this out of any form of cable or rope. You just need a needle, thread, and a pair of scissors to cut the thread (or your teeth if you’re hardcore). 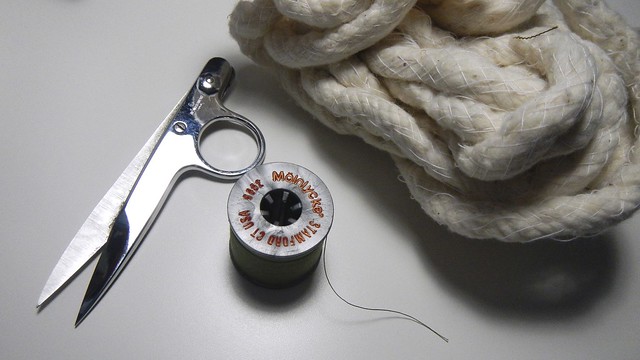 All I did was coil the rope around itself and start sewing it together. You can use any stitch you want, any kind of thread. I used green so you could see it but it wasn’t too flashy. 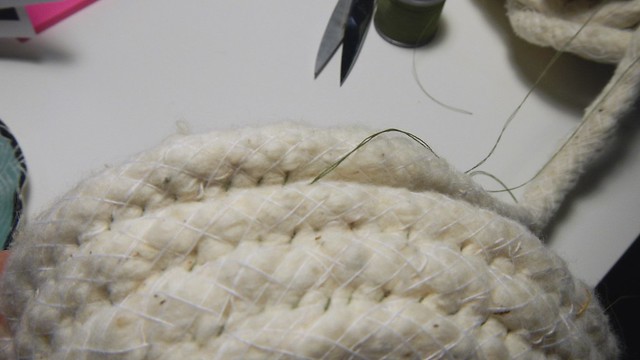 You can change the width of the bowl by sewing the rope together at different angles. It’s hard to explain but you would see what I mean if you were doing it. It just kind of comes naturally. I made this little divot to come up through the centre to provide stability for the bowl. 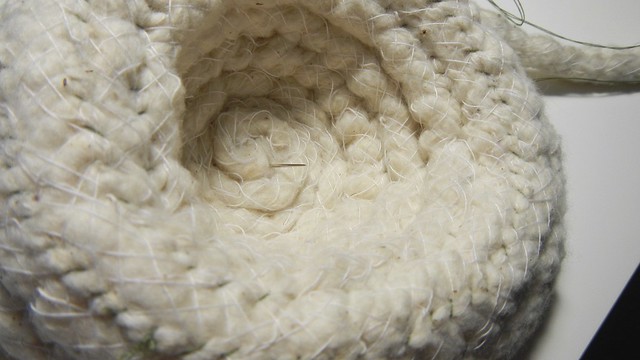 When you flip it right side up at the early stages you have a wee sombrero. 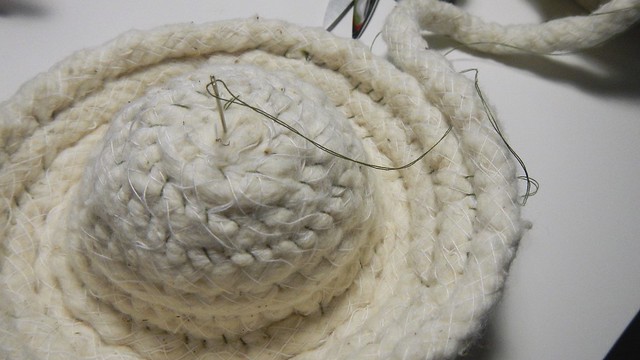 Then I just kept going until I was happy with it and I ran out of rope. You can store whatever you want in it, provided it’s not liquid (it’s not that kind of bowl). Y’know, if you need a place for your copper-coloured pine cones. 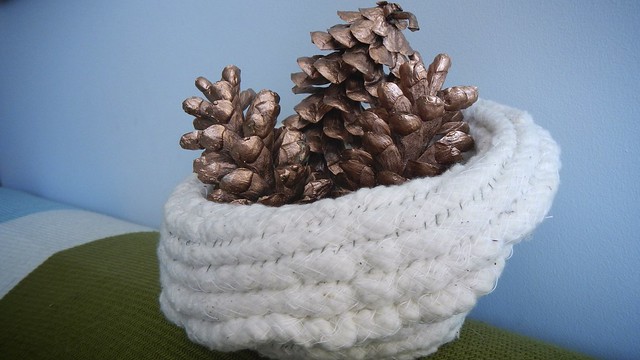 Or your sunglasses.  It’s up to you! 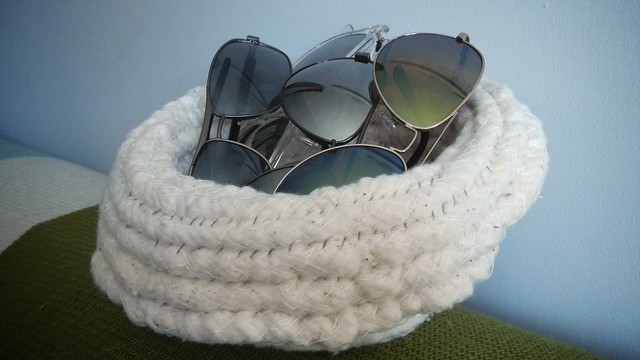 [In case you ever marvelled at my magic efficiency, please note that I started this particular project on Labour Day Weekend and didn’t finish it until the 12th of December.  If that makes you feel better.]

I love fabric.  I am the worst sew-er in the world, but I seem to adopted a love of pretty cloth from my mother.  It’s both a blessing and a curse.  To assuage my inability to live without fabric and to compensate for the utter lack of storage space I have for it, I buy fat quarters.  These are squares of quilting fabric (usually cotton).

So a metric fat quarter is 50cm square, or 20″ x 20″.  But an American fat quarter (and alas, most of these are), is based on another archaic system and so the pieces are either 18″ x 22″ or 18″ x 21″.  And it’s all approximate anyway.  I’m not really sure of the logic there.  Something to do with yards and standard widths and blah blah blah.

You can also get colour-coordinated fat quarters (usually in packages of four or five).  The nice thing about these is they all go together, so you can hand someone a set of napkins, but they’re all different enough that people can tell theirs apart when they want to re-use them.

A handy home-made napkin ring will also help to differentiate.  The Pie made all of these himself by bending spoons with a set of pliers.  We then sprayed them with a metallic copper paint.

You can also use fabric remnants as well.  You can pick them up for a dollar or two in a fabric store, or use the scraps from another project of yours.

Speaking of fabric remnants, I picked this one up at Jo-Ann last year and didn’t unwrap it until now.  I chose it because turquoise and teal are my favourite colours, and I thought the design on this was pretty.

Then I unwrapped it.  WOW.  Talk about a hidden gem!  This will NOT be going into a napkin.  I gotta think on what to do with this one.  Suggestions are welcome.  Just barely not enough to make a skirt, if that gives you an idea of the size.

Anyway, back to the napkins.  First thing you need to do is wash and dry your fabric.

Don’t be alarmed — they will fray.  Oh mercy did these ones ever fray.

And then this one has a slash in it.  I will have to come up with an artful patch of some kind.

Then you have to iron them.  I hate ironing.

Then comes the actual napkin-making.  It involves hemming and sewing in straight lines and nice edges and stuff and MORE ironing.  None of which I’m particularly good at.  But Maia from Glass Beach has a fantastic and clear tutorial on hemming napkins here that you should check out.  It’s brilliant in its simplicity.  I will try to re-create her instructions as best as I can, but hers are better.

First I used a rotary cutter and a ruler to trim all the squares so that I had right angles.  They don’t necessarily all need to be the same size as their partners (unless you’re making napkins for the Queen or something), but right angles make things a lot easier to deal with.

I highly recommend using a rotary cutter and mat for this job.  It’s very hard to get straight lines with scissors alone, and it’s easier on your hands.

Gren helped by sitting on the fabric as I was trying to cut it and making off with the scraps once I cut them loose.

Save the scraps to stuff a toy later on.  Or do something else with them.  I made mine into a placemat, which you will see on Friday.

Then I gave myself a 1″ seam allowance and traced that with a fabric marker.  Actually I couldn’t get to the fabric store and so used a Crayola washable marker.  It washes out just as well, if not better, than a fabric marker.  Guaranteed.

Fold the edge of the fabric so the cut line matches up with that line you drew and iron it to create a flat edge.

To get a nice mitred corner, unfold one of those new flaps at the corner.

Fold the other flap over itself, along that marked line.  This seals in your raw edge and prevents fraying.

Now take the corner bit and fold it down so the edge of the folded part lines up with the drawn line on the side with the unfolded flap.  If you have big fingers or are in general not the most dexterous, you could use an awl or a seam ripper to hold things in place for you, like I did in this photo.

Then you can fold down the unfolded part again, and then fold it over itself again to seal in the raw edge. You can either iron these new edges flat, or simply pin them.  Either way, I’d add a pin or two in the corners just to hold everything in place.

And look at that — it looks like you know what you’re doing!

Now all you have to do is sew that down, making sure to backstitch at the beginning and end to keep your thread from unraveling.  Use an awl or seam ripper to hold the corners in place while you’re sewing them down, too.

And what a pretty napkin you’ve come up with. They look nice with these copper-sprayed spoon napkin rings, don’t they?

Tie them up in a nice little bundle and give them all away!