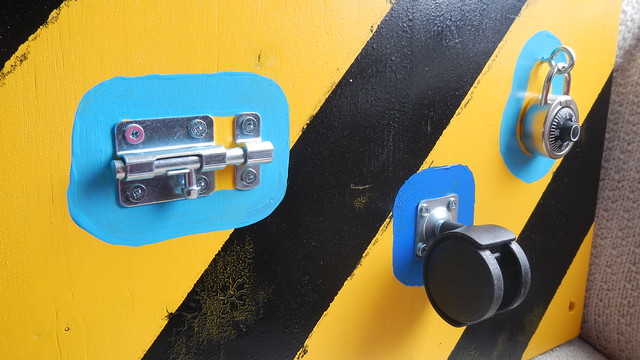 I didn’t take as many photos of this as I should have, but it kind of came together in fits and starts when I could work on it and I may have forgotten my camera a few times. In any case, this is a great gift for the toddlers in your life, and it’s very simple to make: grab a board, paint it up, add bits of hardware and you’re set. It’s all the stuff that small children are fascinated with around the house in one convenient spot where they can play with it safely.

So I started with a wide pine board, which I cut in half. I made one for Rosa and one for Gen. Zod for Christmas. 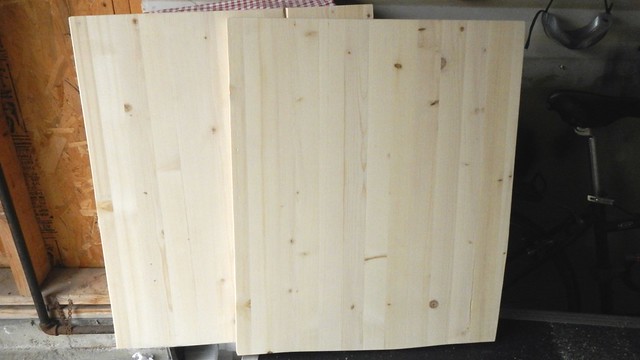 Drilled screw holes at all the corners so it could be mounted on the wall for added security. 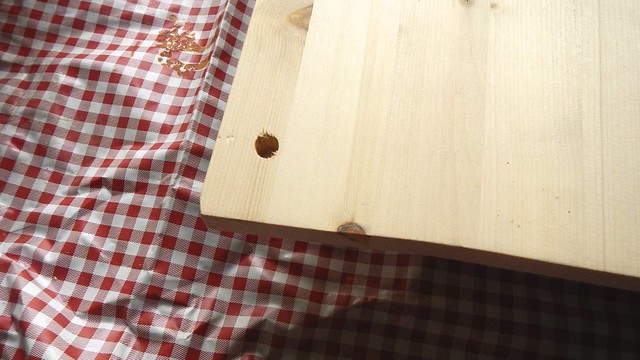 I later put felt at the corners as well so it could also lay flat on the floor without damaging anything. 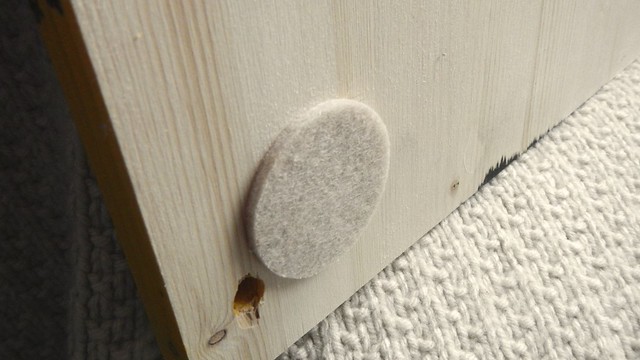 Sanded and spray painted it. 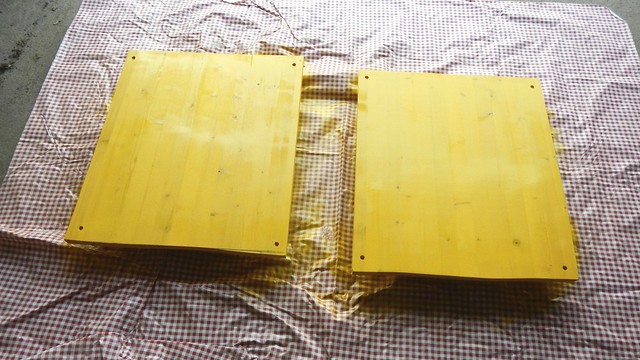 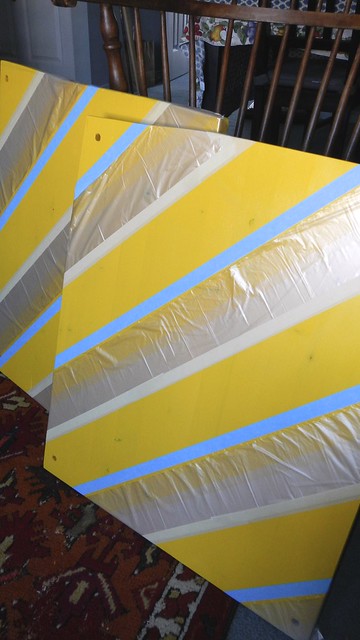 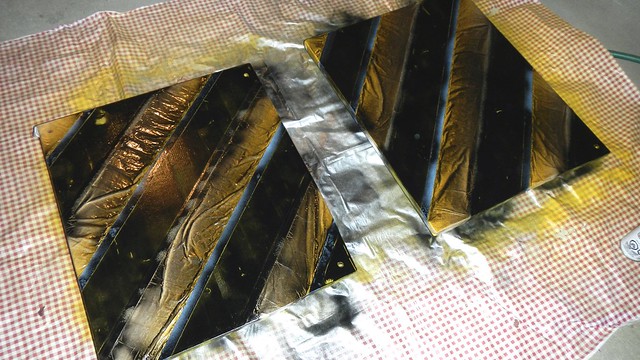 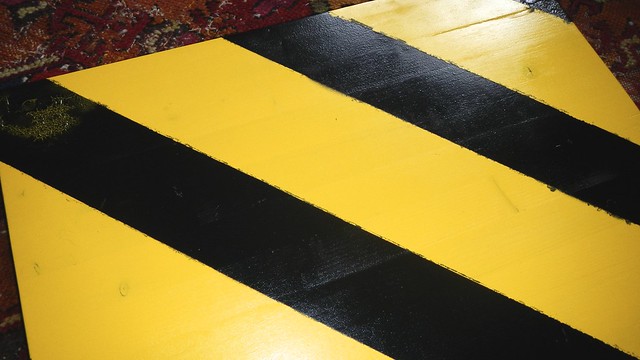 They didn’t come out perfectly, but if you’ve ever seen the types of signs the construction workers make around here this is a freaking masterpiece in comparison. 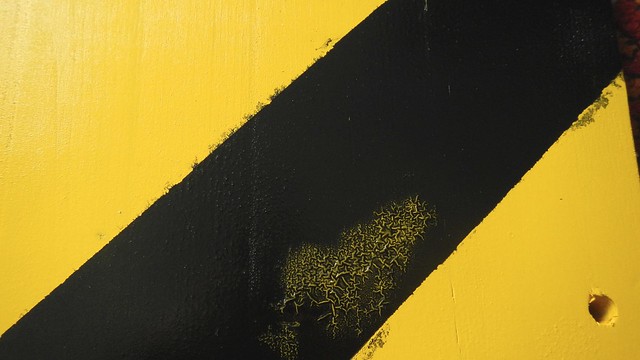 Then I gathered an assortment of hardware: slide bolt (also known as a barrel bolt), casters from my old computer desk, a padlock, spring door bumper (the kind that makes farty noises when you twang it), a hinge from a door and a security chain. I discovered that if you screw one side of a hinge too tightly to its surface the hinge won’t turn (or won’t be moveable by a toddler in any case), so make sure to adjust that accordingly if you use one. 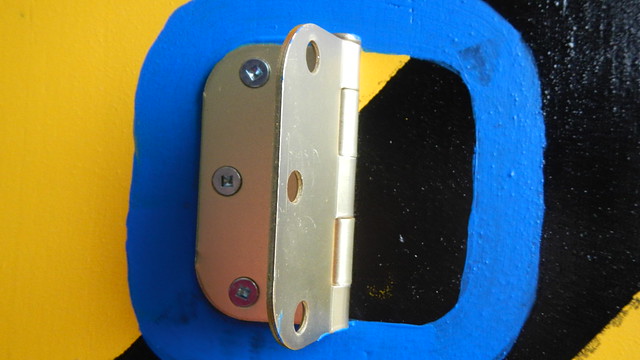 Then I just painted around them with some craft paint for visual interest and added a little caution sign at the top. Now it’s a toddler trap, because they can’t stay away! 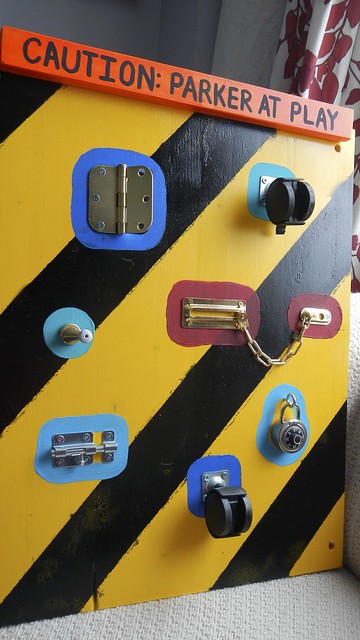 I saw this about a year ago, and I remember thinking at the time that it was such a simple yet elegantly nifty project I would have to make it sometime.  What better time than the present?

I wrangled a log out of the mildewed pile in our dilapidated excuse for a shed and got to work.  You can of course use any form of windfall or anything you find lying around.  I’d love to try this with driftwood, if I still had my beach handy.  As it was a pretty long chunk of wood, I figured I’d make three pencil holders, just to spread the love amongst my Christmas gift recipients.

I also thought I might make them slightly angled, so that all the pencils or pens could be viewed from one side, instead of them all being on the same level. So I sawed them accordingly, in varying thicknesses.  Actually, the Pie did most of this because I took too long.  But we didn’t really try too hard to get things level or straight — the crooked adds to the charm, and I swear we did this on purpose.

And then the bark, which had been sitting and drying out over our kitchen heater for two months, just peeled right off so easily.

I used a butter knife to get the thinner inner bark off.

Now you drill your holes.  I used 3/8″ and 1/2″ drill bits, to accommodate skinny and fat pens and pencils. You know, like the fat ones you pick up from the bank or that you get in swag bags at conferences and stuff.

You can space them out evenly or put them in randomly, whichever floats your boat.

To make sure that all your holes are uniform in depth, use a bit of tape around your drill bit to mark how deep you want it to go.  When the line of the tape touches the wood, you’ve gone far enough.

Then I sanded, to smooth out the edges and to make the top nice and even.  You don’t want splinters in something you’re going to be touching all the time.

I stained one of them as well, again for kicks.

To go with the pencil holders, I thought I would include some pencils I made myself.

I got the idea from here, but modified it so it was easier for me (because I found this actually quite difficult).  You need some 2mm pencil leads, the kind that go into architectural drafting pencils (also known as clutch pencils).  They tend to come in small plastic boxes of 10, and you can find them at art supply stores or on the internet.

Then you need some thin paper.  I used a combination of newspaper flyers and origami paper for this, with the cheap newspaper on the inside and the nice origami pattern on the outside.  Cut the paper into squares that are the same length as the leads, which is usually about 5″.

Take a paint brush and some glue and paint some onto the edge of one of the pieces of paper.

Lay your lead onto the glued surface, just a little bit from the edge.  Fold that extra part over the lead and tuck it in.

Now start rolling, carefully, putting even pressure on both ends of the lead.  You want the paper to be tight around the lead but you don’t want to put too much pressure on it that the lead breaks.  I definitely broke a few.  And go slowly, so you can make sure that the lead rolls straight in the paper.  Many of my pencils came out crooked and had to be trimmed later.

When you reach the end of the paper, add some more glue and fasten the edge securely on your roll.  Repeat with more paper until you get to the thickness you like, with some nice patterned stuff on the outside.

Put some glue on the outside, just to seal it all in.

Allow your pencil to dry, then trim the pointy end of the pencil with a knife or a pencil sharpener, and you’re all set.