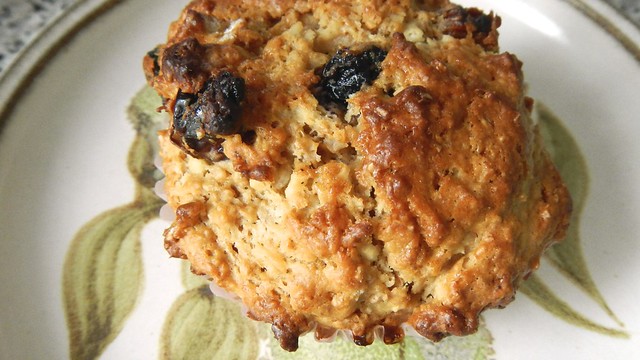 The thing I like best about muffins is that, while they’re pretty picky about how you mix them, there is no exact science as to what you mix into them.  This means that every time I make a batch, I try my hardest to cram everything I can into each one.  How many things?  All the things. 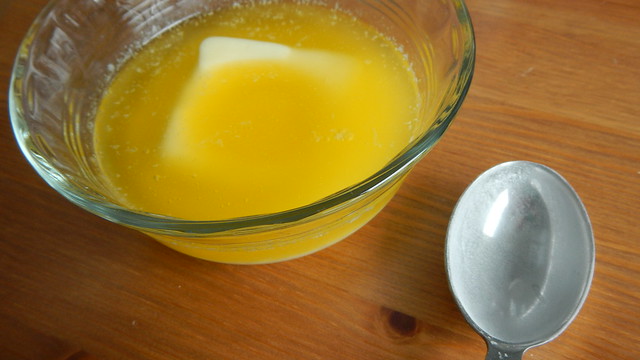 Let’s DO this.  Preheat your oven to 400°F and grease a muffin tin or line it with paper liners.  Greasing might actually work better in this situation, as I found the baked muffins were hesitant to come out of their liners. 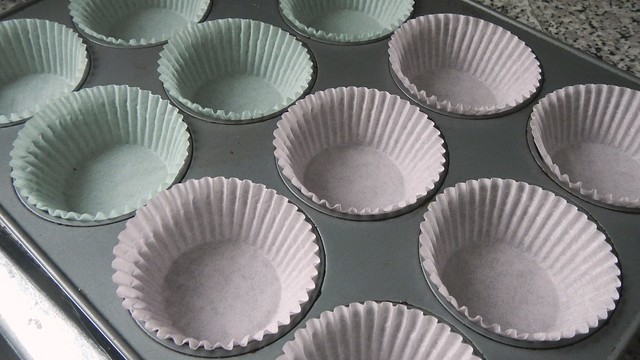 In a bowl, whisk together 2 cups all purpose flour, 1 tablespoon baking powder,  and 1/2 teaspoon ground nutmeg. 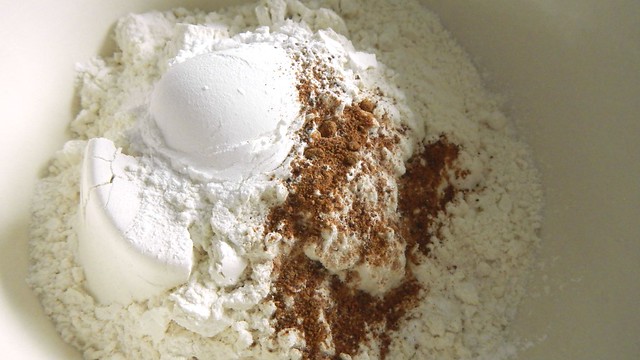 Then plop in 1/2 cup bran and 1/2 cup unsweetened coconut and stir that as well. 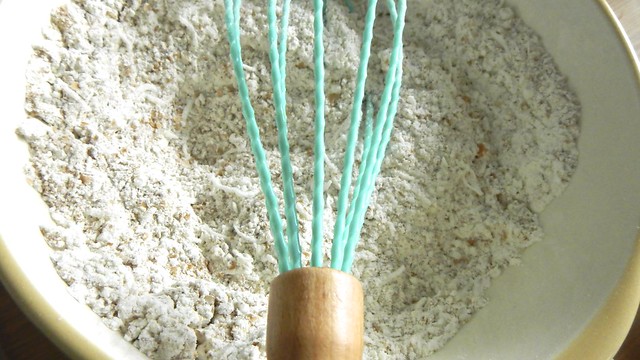 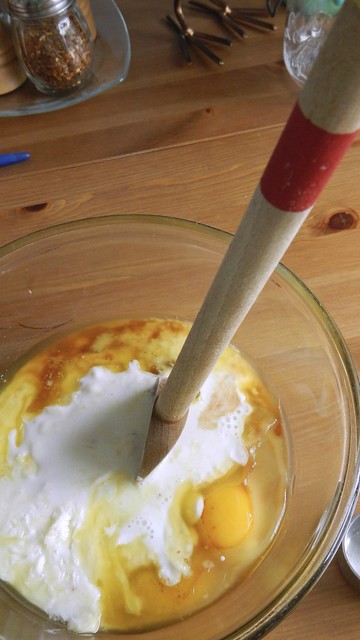 I actually used coconut sugar, because I had it on hand.  I like it because it’s not super sweet. 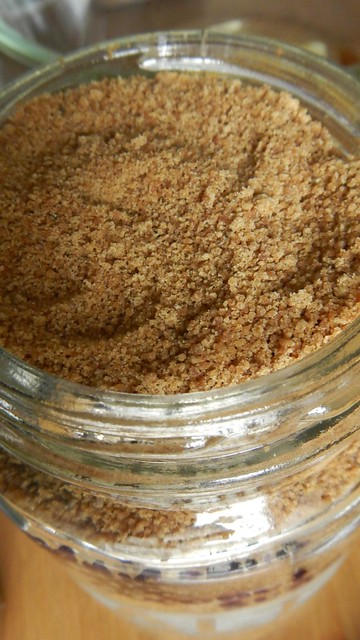 Grab a few handfuls of dried fruit and nuts, if you’d like, about 1 1/2 cups.  Here we have dried versions of cranberries, cherries, blueberries, grapes (raisins, duh), and apricots.

Now here’s the trick with muffins: don’t mix the wet with the dry until you’re ready to plop the batter in your baking tin. 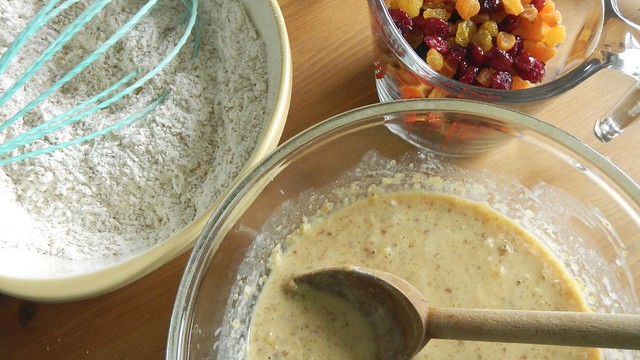 Add the flour mixture to the egg mixture and stir until just barely combined.  Now you can add in your fruit and stir just until it’s evenly distributed throughout. 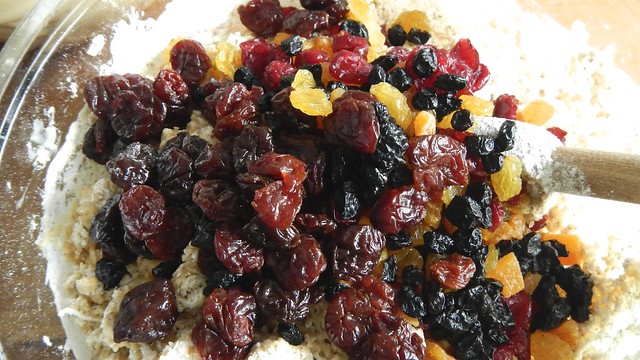 Drop the batter into your muffin tins.  I ended up completely overflowing mine because these puppies don’t expand too much. 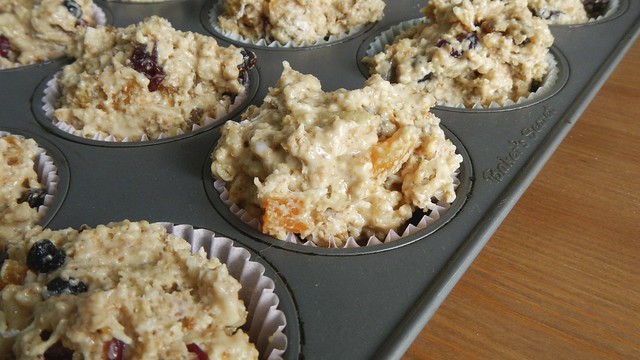 Bake for about 17 minutes, until a toothpick inserted into the centre muffin comes out clean, and let cool for a few minutes. 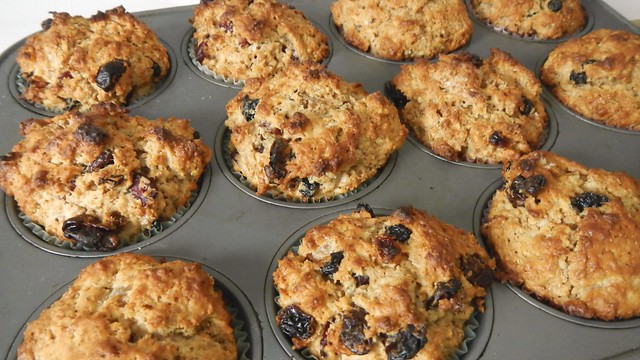 So good with butter! 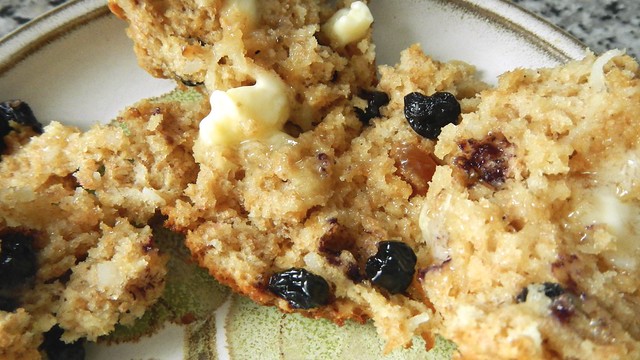 I had no idea that when I came up with this recipe the result would taste almost exactly like a Terry’s Chocolate Orange.  If that’s a thing that you like, then you will like these, guaranteed.

Preheat your oven to 375°F and line two baking sheets with parchment paper.

Take an orange and zest it.

Eat the orange.  It’s good for you.

In the bowl of an electric mixer, beat together 1/2 cup butter, 1/2 cup granulated sugar, and 1/2 cup brown sugar, until fluffy and pale (like a vampire corgi?).

Beat in 1 egg and the orange zest.

Slowly add in the flour/cocoa mixture. Beat on low, or you will end up with flour and cocoa up your nose. Guaranteed.

Drop the cookies from a tablespoon onto your baking sheets (or freeze them in balls for later, which I also did).

Bake for 8 minutes, rotating halfway through, until just set in the centre.  Allow them to sit on the baking sheet for 2 minutes before removing to a wire rack to cool completely.  And then of course you will need to eat them.

I was going to call these things “savoury sausage sliders,” or even “summer savoury sausage sliders,” but then the Pie suggested the above title and for some reason I started to laugh so hard I needed a tissue and had to sit down.  And then he suggested that, since we used hot italian sausage meat, we call them “picante petite piglet patties” and I may have told him to shut up at that point.

Anyway.  These are sliders, if you hadn’t gathered that by now.  I picked up a package of ground sausage meat the other day and this is what we did with it.  Basic ingredients are about 1lb ground pork, 1 egg, half a white onion, and some fresh summer savoury.

Mince up the savoury and the onion and chuck them in a bowl with the sausage meat and the egg.  Season with salt and pepper.

Give that a good stir with a spoon and then mix in about 1/2 cup panko bread crumbs (or whatever kind of bread crumbs you have on hand).

Form the goo into balls slightly larger than a golf ball but smaller than a cricket ball and flatten them into patties (I ended up with eleven patties).

Fry those suckers up.  For some reason the light was such in my kitchen on this particular afternoon that it took us twelve tries (the Pie tried to help) of blurry patty photos before I gave up and used flash.

While that’s on the go, why don’t you have yourself a salad, too?  Here we have a mixture of baby spinach, a small hunk of plain goat’s cheese (chevre), a handful of sliced almonds, another handful of dried cranberries, and a diced ripe pear.

Then the dressing is 3 equal parts vegetable oil (I used almond, because we’re trying to use it up), rice vinegar, and orange juice).

Top your sliders with whatever floats your boat.  I used mayo, tomatoes, avocado, and spinach.  The Pie voted for barbecue sauce and cheese.  We had them on some picnic buns I grabbed in the bakery section.

All in all, a good summer meal. Don’t forget to eat your veggies! You see them peeking at you in the background? Don’t forget them!

Mincemeat is to the winter holidays what chocolate and beer are to the Stanley Cup Playoffs (I’m serious.  Cadbury Mini Eggs and a microbrew during the finals is to die for).  Originally a combination of dried fruits, spirits, fat, and meat, over the centuries the meat part has all but disappeared from the recipe, and now it’s more of a dessert type of thing.  It does still employ three of the age-old methods of preserving, however: fat, sugar, and alcohol.

I have adapted Allora Andiamo’s recipe from Jamie Oliver‘s website and it is incredible.  I quadrupled some things, and other things I just chucked in the amount I had, so it’s not particularly faithful to Ms. Andiamo’s original recipe but I give her full credit.

In a very large bowl I chucked the following, by weight:

474g (1lb) shredded butter (put the butter in the freezer, then grate it, or break it into chunks and run it through the food processor until you have fine crumbs)

1kg apples, finely chopped (I left the skins on and used a variety of different kinds, whatever I had lying around)

juice and rind of 5 large oranges

juice and rind of 2 large lemons

8 tablespoons rum or brandy (I used both, of course)

Give that a good stir, cover it, and leave it somewhere to marinate for about 24 hours.

The next day, distribute the mincemeat into casserole dishes (or, if you are clever like me and used a metal bowl, don’t bother), cover with aluminum foil, and bake at 225°F for 3 1/2 hours.

I stirred mine halfway through, just to be thorough.  And also because I don’t trust anything on its own in an oven for three and a half hours.

Remove from the oven and allow to cool a bit.  The liquid will thicken as it cools so make sure to stir it occasionally in order for the syrup to coat all the fruit.

Before it completely cools, pour into sterilized jars and seal — can according to your canner’s instructions, or check out our tips to canning here.

Store in a cool dark place for about 3 weeks before using.

The Pie doesn’t particularly like Brussels sprouts, but the rest of us adore them.  To find a compromise this past Thanksgiving I pulled inspiration from a number of different recipes, and also from a salad I’d eaten at The Black Tomato two nights before, and came up with something that we all loved.

I’m not going to give you measurements for this recipe, because to be honest I didn’t measure anything, just kind of threw it in when the inspiration struck me.  Besides, everyone has their own preferences as to amounts and proportions in a salad.  Just estimate and you’ll be fine.  This version served ten people with tons of leftovers.

First, you cut up your Brussels sprouts.  We tried them first with a mandolin, but then found it was easier just to slice them thinly with a stupid sharp knife.  Cut off the tough stem part at the bottom and discard any bruised or torn outer leaves, then carefully shave those suckers down.

We ended up with a medium-sized bowl full of bits of mini-cabbage.

Because this was sort of a do-at-the-last-second kind of salad, and because Thanksgiving at the last second gets a little hectic as things come out of the oven and the turkey needs to be carved, I wanted to set up a mise en place for this so everything would be ready to go when I needed it.  Accordingly, I prepared the rest of my ingredients ahead of time.

A handful each finely chopped radicchio and Boston lettuce.

Pecans, ground in my food processor.

Mix together the goat cheese, cranberries, and ground pecans.

Set that aside for now.

In a large frying pan or skillet melt about a third of a cup of butter at medium heat.  Toss in your green onions and shallots and sauté for a few minutes until softened.

Chuck in your massive amounts of Brussels sprouts and stir them around until they’re thoroughly coated in butter and start to wilt.

Add in the raddichio and the Boston lettuce and stir to mix.  Drizzle gently with olive oil, balsamic vinegar, and a healthy dash of real maple syrup.  Toss to coat and remove from heat.

Add in your goat cheese mixture and toss it well.