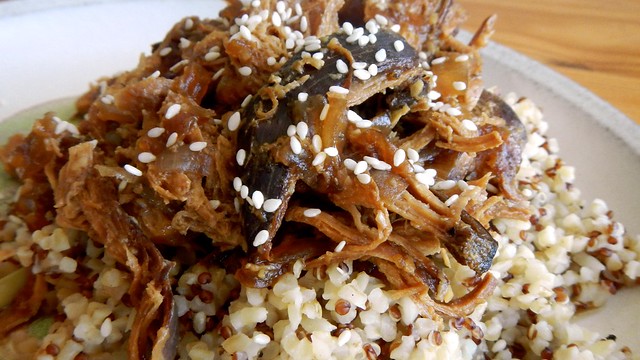 Here’s another quick-to-make slow-cooking easy-to-freeze recipe that is highly satisfying and adaptable (which I adapted, of course, from i heart naptime). You can use fresh or frozen chicken breasts in the recipe, which means that even if you didn’t plan ahead you’re still going to be just fine. 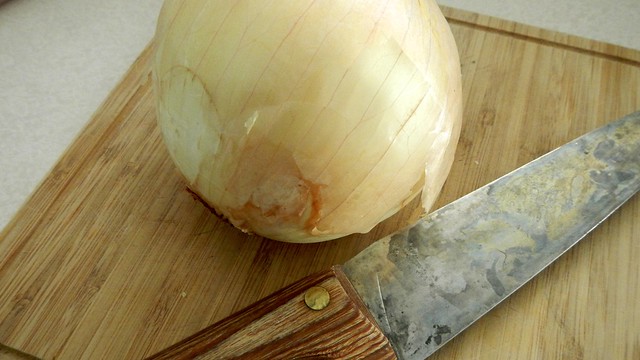 Take 2-3 boneless, skinless chicken breasts (mine are frozen) and plop them in the bottom of a slow cooker pot turned to low. 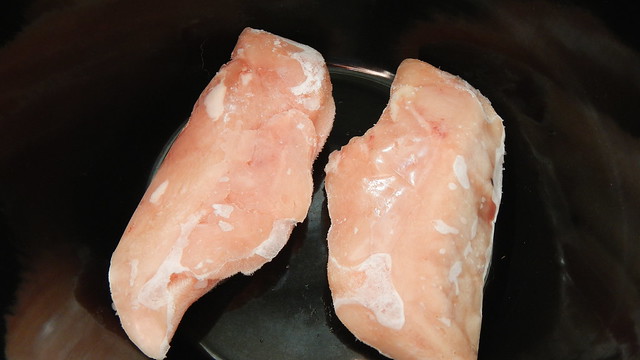 Chop up 1 sweet onion into bite-sized pieces (the original recipe calls for onion powder but I think real onions are better). 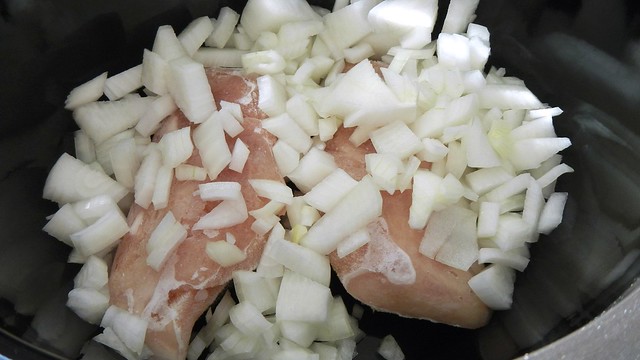 In a bowl, dollop 1 tablespoon olive oil, the equivalent of 2-3 cloves minced garlic, 1 teaspoon kosher salt, and a bunch of ground pepper, as much as you like. 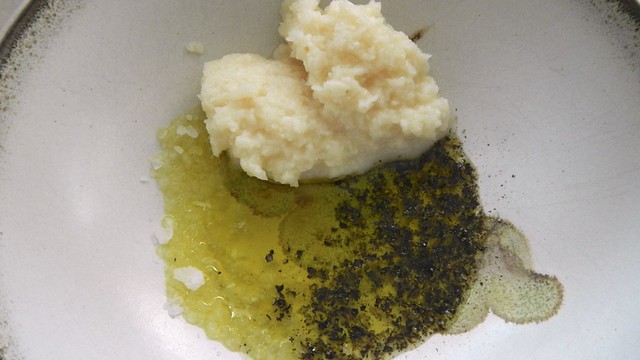 Add to that as well 1/2 cup soy sauce and 3/4 cup honey and give it a good stirring. 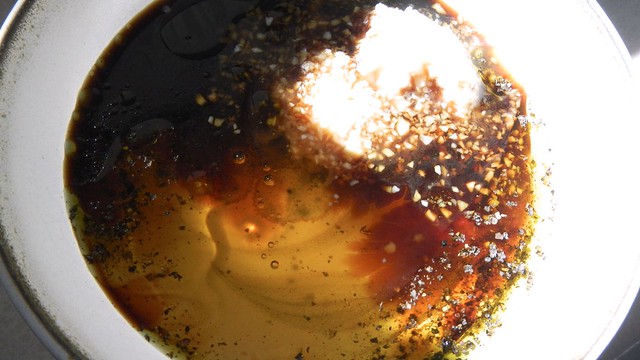 Pour the sauce over your chicken and cook for 4-6 hours on low. 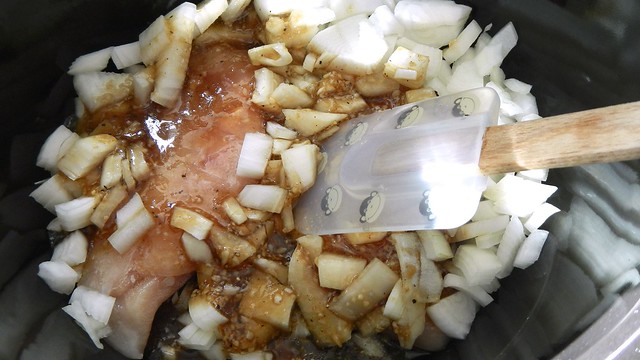 And if you happened to have additional chicken breasts, you can chuck those in a freezer bag with more onions and more sauce (I made the recipe in triplicate) and chuck those in the freezer for later.

The chicken is done when it falls apart on you. 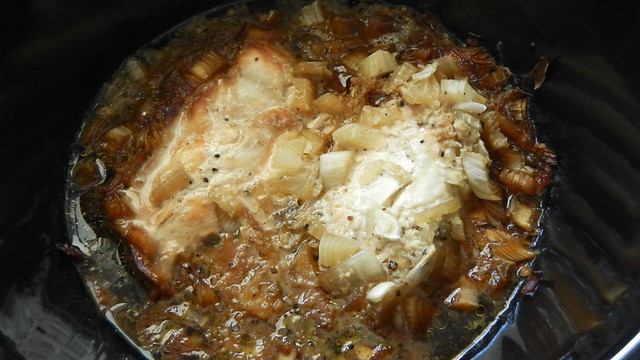 I decided to go whole hog and shredded it with a fork to expose all the chickeny bits to the sauce. 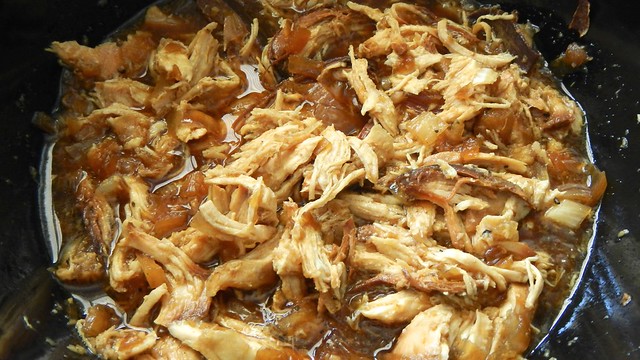 I served it on top of a quinoa-bulgur blend that I cooked with just a little bit of lemon juice added to the water, a little bit of extra sauce, and garnished the whole thing with a pinch or two of white sesame seeds. 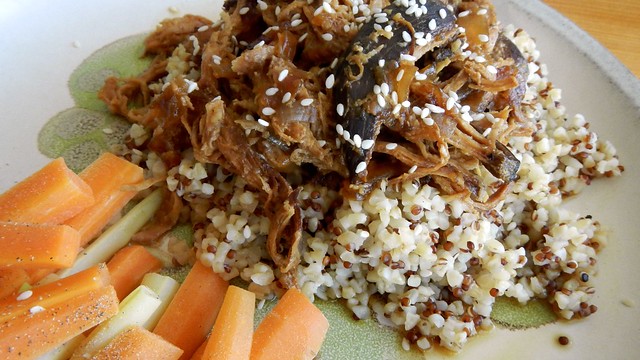 For our annual potluck, the Pie and I decided to make three hot dips and have them with crackers and vegetables for people to snack on while they waited for the rest of  our guests to arrive.  As with all slow cooker meals, the prep pictures look prettier than the final shots, so you’ll just have to take my word for it that they’re well worth eating — so worth eating, I’m giving each dip its own post this week. Today we’re making BUFFALO CHICKEN WING DIP.  This recipe may seem a little odd as a dip, but it works — trust me!

Drain a 10oz can of chunk chicken and break it up with your fork.  I think next time I make this I will use real roasted chicken instead.  But this still works.  Chuck the chunks in your 1.4qt slow cooker.

On top of that, pour in about 3/4 cup buffalo wing sauce.

And then grate over that 3/4 cups cheddar cheese.

Cook on low for 3-4 hours, stirring occasionally to melt everything together, and serve with everything you like to dip in dips!

For our annual potluck, the Pie and I decided to make three hot dips and have them with crackers and vegetables for people to snack on while they waited for the rest of  our guests to arrive.  As with all slow cooker meals, the prep pictures look prettier than the final shots, so you’ll just have to take my word for it that they’re well worth eating — so worth eating, I’m giving each dip its own post this week.  Today we’re making SPINACH AND ARTICHOKE DIP WITH BACON.  This dip, adapted from a Better Homes & Gardens recipe, is easy and fantastically tasty, and we halved it to fit in our 1/4qt slow cooker.

First, cook up a couple slices of bacon.  Drain those on paper towels and crumble them when they’re cool.

Dice up about 1/2 a sweet onion and a few green onions, and chuck them in the bacon skillet with a little bit of the bacon fat and sauté until the onions are soft and translucent.

Chuck those in your 1.4qt slow cooker when they’re ready to go.

Roughly chop up the contents of a 14oz can of artichoke hearts and huck those in, as well as about half a drained 10oz box frozen spinach.

Chop up a sweet bell pepper finely and chuck that in.

Crumble up about 2oz blue cheese and pitch that in too, as well as 4oz package plain cream cheese (that’s half a block package).

Add in as well as much minced garlic as you like, and 1/2 teaspoon dry mustard and give the whole thing a good stir before covering and cooking, stirring occasionally, for about 2-3 hours, until everything is all melty and lovely.

Stir in your crumbled bacon and you’re good to go.

It’s the one on the right. Stay tuned for the middle dip on Friday!

As a thank you for babysitting Ruby one weekend, Cait gave me these three wee 1.4 qt crock pots as a wee present.

Apparently Ruby is more evil than she looks.

For our annual potluck, the Pie and I decided to make three hot dips and have them with crackers and vegetables for people to snack on while they waited for the rest of our guests to arrive.  As with all slow cooker meals, the prep pictures look prettier than the final shots, so you’ll just have to take my word for it that they’re well worth eating — so worth eating, I’m giving each dip its own post this week.  Today we’re making BACON CHEESEBURGER DIP.   This recipe is adapted from Betty Crocker.

Start with 8 slices of your favourite bacon.

Cook those up nice and crispy, then drain them on a paper towel.  When they’re cool enough, crumble them up with your fingers.  Save a few tablespoons for garnish later on.

Then, with your pan still hot (and redolent of bacon), chuck in 1/2lb lean ground beef and cook that stuff up until it’s no longer pink.  Drain that sucker.

Chuck the ground beef and your crumbled bacon into your 1.4qt slow cooker.  Turn it on to low.

Grate up 1 cup cheddar cheese and chuck that in, as well as a 10oz can diced tomatoes, juice included.

Cube up 1 8oz package plain cream cheese and add that in as well.

Cover and cook for 2-3 hours, stirring occasionally, until everything is hot and bubbly and melted together.

Slice up a few handfuls parsley and chuck that in for colour.

We also sliced up some bell peppers for dippin’.  And crackers too.

Garnish with your remaining crumbled bacon and serve (it’s the one on the left).  Stay tuned for the rest!

… then you really need to figure out what to do with them when you’re about to go on vacation for two weeks.

This was our situation a few weeks back.  And really there’s only so much apple crumble you can handle in the summer months.

Why not make yourself some applesauce?  In addition to providing a tasty and nutritious snack, you can also use it as a dairy substitute in baking, and even add it to meat marinades to add flavour.  And it’s not like it’s hard.

I had nine Mcintosh apples, which I chopped up relatively small.  You can take the skins off if you like, but every time I do that I see my mother’s disapproving face in my mind and hear her saying, “that’s where all the vitamins are.”  So I leave them on, for texture and colour.

Take two or three cinnamon sticks and about ten cloves, and wrap them up in a square of cheesecloth.

Tie it into a tidy package.

Toss that and your apples into a slow cooker. Add in a few spoonfuls brown sugar and some ground cinnamon, as well.  You can leave the sugar out altogether if you want a healthier sauce.

Pour in about 1/4 cup water, just for juice’s sake.

Cook on high for a couple hours, stirring occasionally.

The smell is fantastic.

When the apples are soft and brown, you are all set.

Make sure to remove and discard the spice bag when you’re done.

Squish the apples up with your spoon.  If you really want to go super smooth, put the sauce in a blender.  I like mine with a bit of structure.

The best part is that applesauce freezes up real good.  So you can enjoy it any time!

Dinner parties like the feast at Thanksgiving are all about timing and having all your different dishes be ready at exactly the same time.  It’s nice to be able to make things ahead of time, or at least to be able to chuck some of those things into a slow cooker or crock pot and ignore them while you do other things.

This recipe is adapted from Phyllis Pellman Good’s post at Fabulous Foods and is really easy.

Cover and cook for about three or four hours until the carrots are tender.

Put the carrots in a serving dish and keep them warm.  Take the cooking juices and bung them in a pot.  Bring it to a boil.

Dissolve 2 tablespoons corn starch in 1/4 cup water and add that to the juices, boiling for another full minute until the glaze is thick.

Pour over top your carrots and serve.