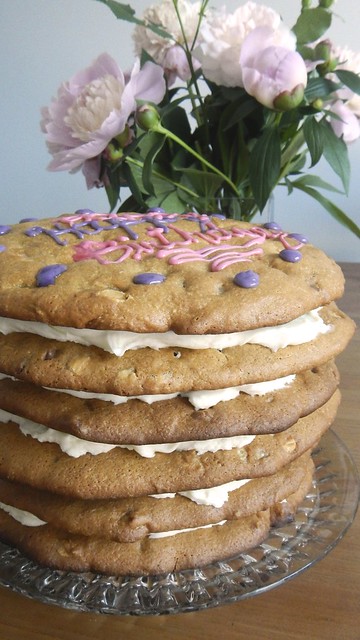 This past Father’s Day was a first for Krystopf, but it was also his lovely wife’s birthday, so we of course celebrated in style.  She requested cookies instead of a cake, but I can’t just make cookies for someone’s birthday, now can I?  Pshht.  NO. 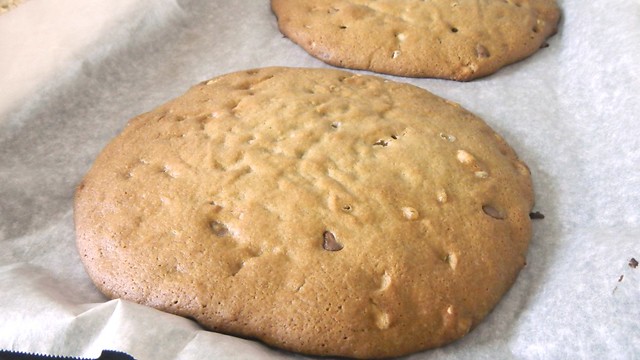 While I do excel at making cookies from scratch, from my brain meats only, for my first foray into the physics of cookie stacking I decided to stick to a recipe.  I picked this one from Big Girls Small Kitchen, which is an adaptation of a Martha Stewart favourite.  Like many Martha recipes it’s persnickety with its rules, but worth it in order to learn the proper technique.

Start by preheating your oven to 350°F and grab some baking sheets and some parchment paper.  Find something that is 8″ in diameter (like a cake pan) and use it to draw circles on your parchment to fit the baking sheet.  You’ll need five circles. 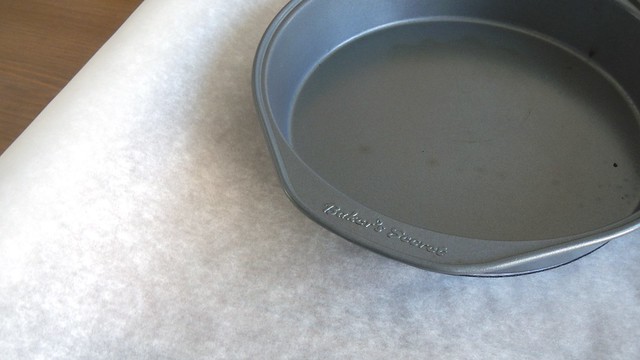 One of my baking sheets is big enough to fit two circles, but the rest only fit one. 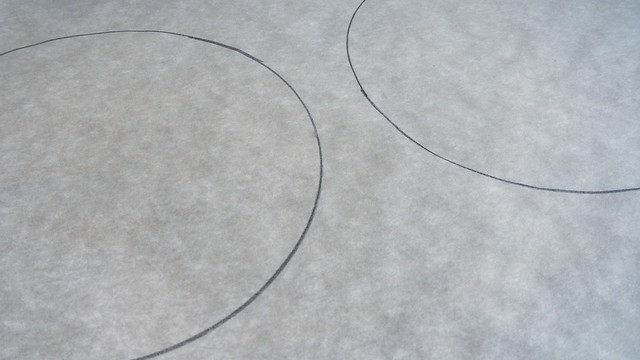 Whisk together 4 cups flour, 1 1/2 teaspoons baking soda, and a teaspoon or so ground cinnamon.  Set that aside for the nonce. 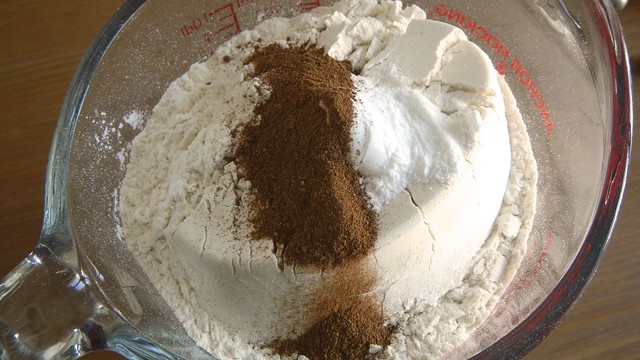 In the bowl of an electric mixer, beat together 6 tablespoons butter, 1 1/2 cups light brown sugar, and 3/4 cup granulated sugar.  Keep going until it starts to stick together — there’s not enough butter to make it truly creamed, so don’t worry if after 3 minutes or so you just have sugar and butter mixed together and nothing super fluffy. 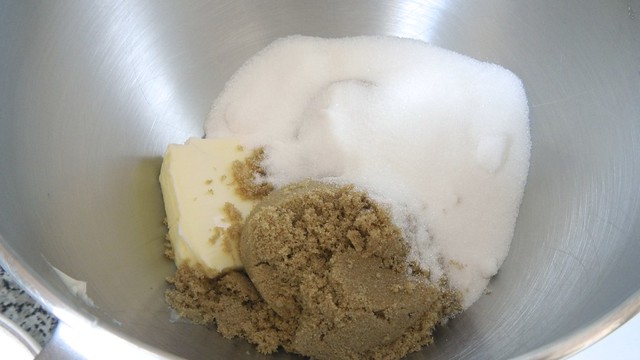 Add in 3 whole eggs plus 2 egg yolks and 2 teaspoons vanilla extract and keep beating that until it’s smooth. 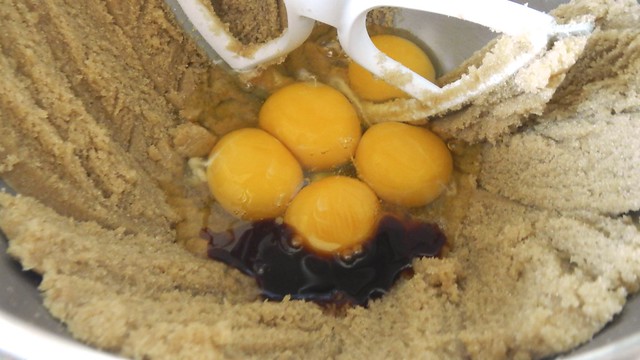 Dump in half your flour mixture and stir that in on low for a while; then, drizzle in 3/4 cup heavy (whipping) cream. 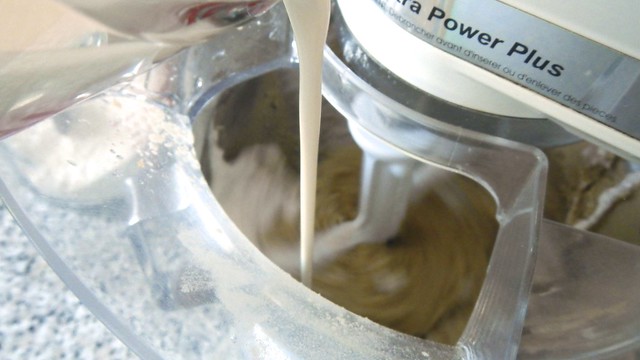 Once that’s mixed in you can add the rest of the flour.  Mix that until it’s fully combined. 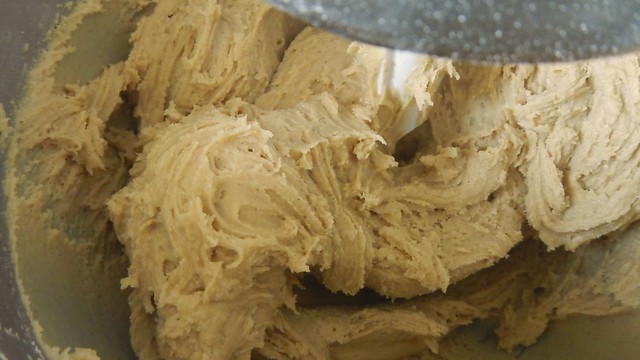 Now you’ll want to stir in at least 2 cups chocolate chips.  Atlas likes a mixture, so I have about 1/3 each of milk chocolate, white chocolate, and butterscotch — her favourite! 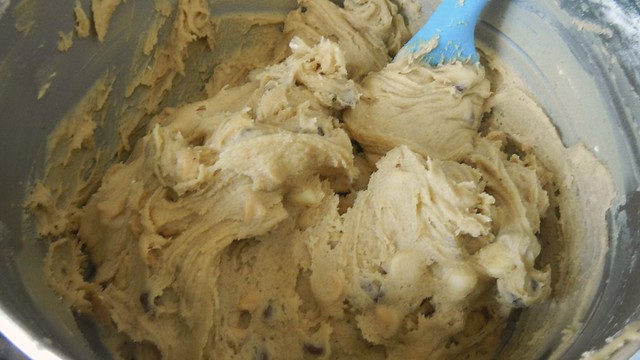 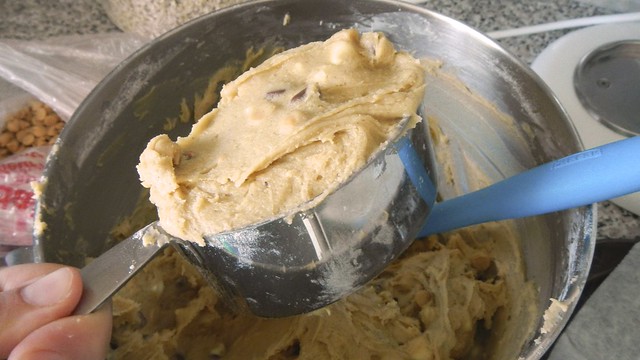 Dump that into the centre of one of your circle outlines. 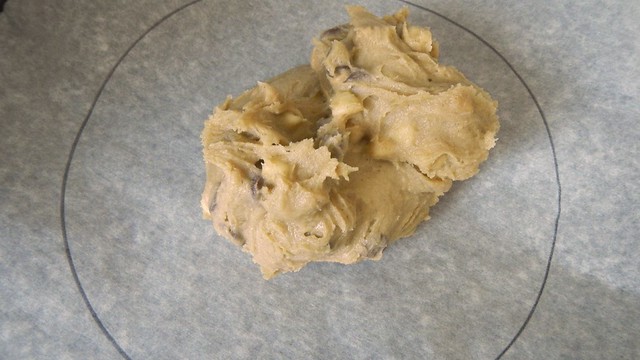 Use a spatula (or a knife) to spread the dough into a level circle within the confines of the outline.  Do that four more times (confession: I actually had enough dough for exactly six circles, but this did make the “cake” absolutely huge). 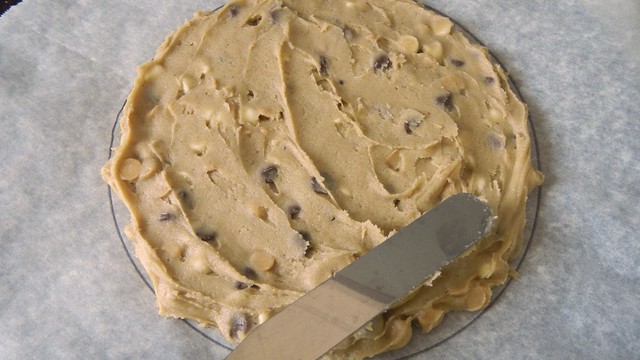 Bake for 10-12 minutes, until the edges are a light brown, then pull them out and check them over.  If your cookie isn’t as circular as it should be, use a clean spatula (or knife) to gently nudge the cookie back into shape. 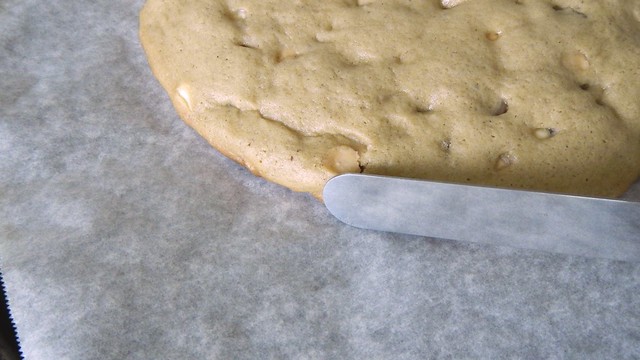 Shove that back into the oven and bake a further 6-8 minutes, until the whole cookie is a nice light brown. Leave the cookies on the baking sheet for a few minutes to firm up before transferring to a wire rack to cool completely. 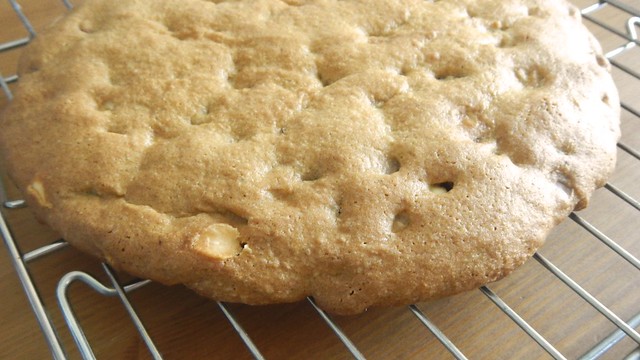 While the cookies are doing their thing, you can mix up some frosting.  Beat together 2 8oz packages cream cheese with 1 cup icing sugar, then add in a drizzle of cream to smooth things out. 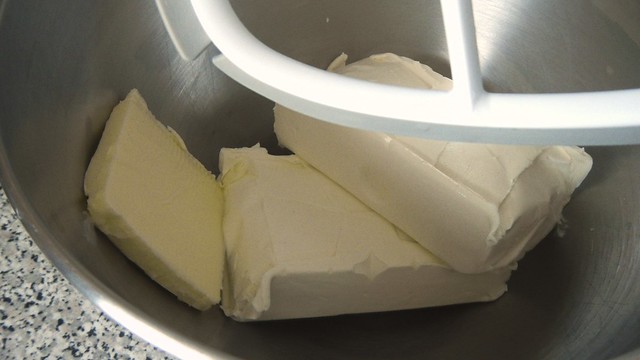 The original recipe called for FOUR packages of cream cheese but I think there was enough going on with this cake without adding double the icing.  And I normally never say that there’s too much icing on something. 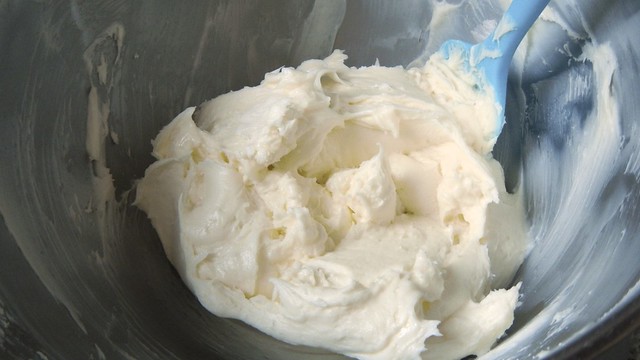 Spread the frosting on the top of four of the cookies. Or five, if you ended up with extra like me. 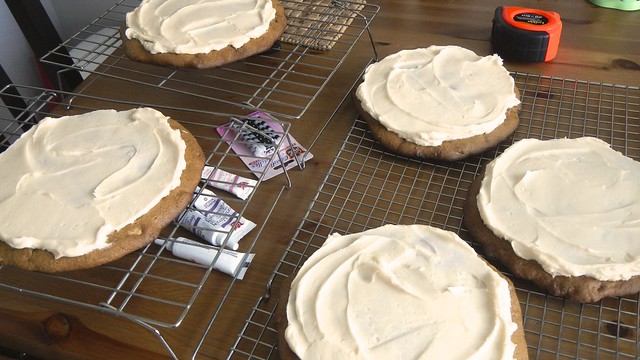 As you can see I used some commercial cookie icing to write on the top.  Forgive my handwriting and the weird run in icing at the beginning of the B. 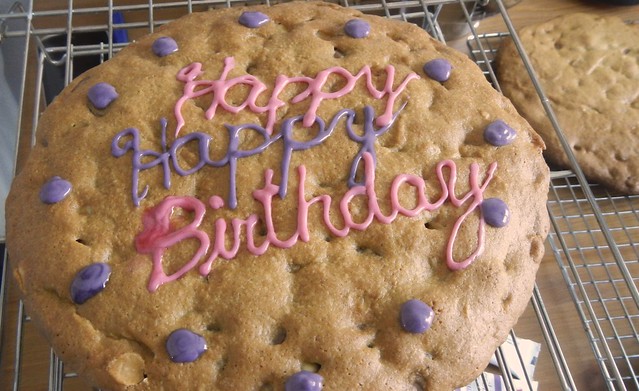 Stack the frosted cookies on top of each other and then put the unfrosted (or decorated) one on top.  Chuck that in the fridge to chill for at least 30 minutes, and bring it to room temperature before serving. 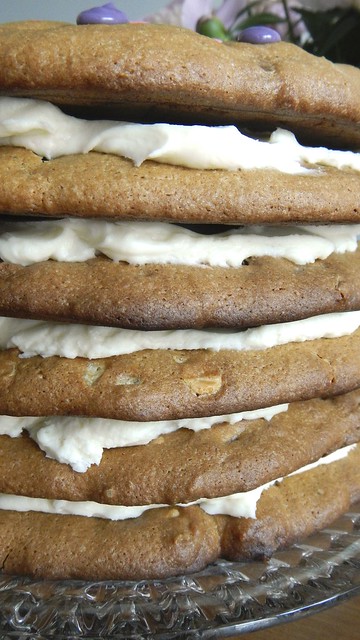 It was a hit!  Having made it though, I think I’d like to try it again with some of those lovely thin greasy/chewy/crispy chocolate chip cookies you make with melted butter.  The cakey ones were nice, but there was just too much cake and it was hard to cut thin slices of it. 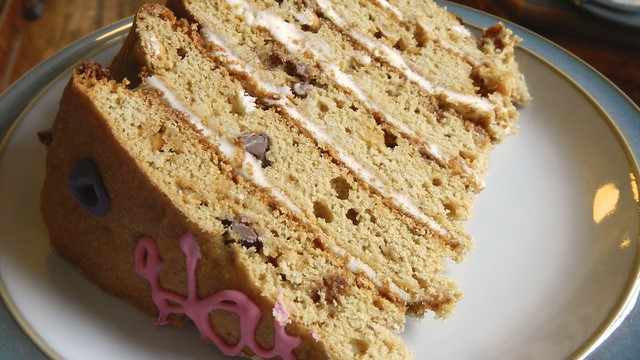