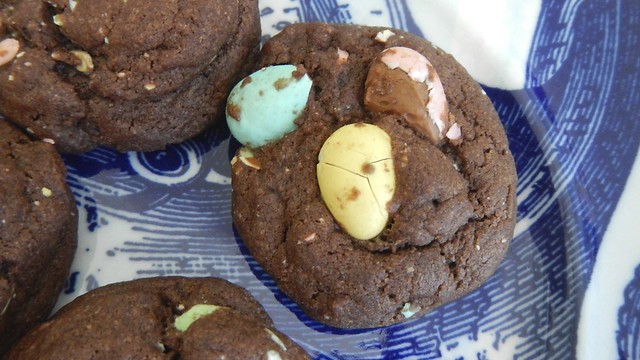 Necessity is the mother of invention. These cookies were a necessity. They were made under less-than-happy circumstances. We’d just come to the realization that Indy was no longer safe living in our house and we had to take him back to the breeder as soon as possible in order to avoid compromising his physical and mental health and to start the hard road of Gren’s anti-anxiety conditioning right away. To say we were abjectly miserable would be a gross understatement. 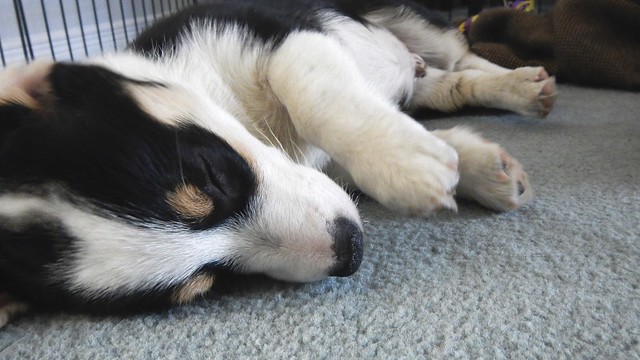 So I made these cookies as a bit of cold comfort for the situation. I’d already braved the supermarket with sunglasses and a hat to hide my red eyes in order to take advantage of half-price Cadbury Mini Eggs, but when I got back I discovered I was completely out of eggs, and I just didn’t have it in me to go back. So I simply went without. And here’s the recipe for it. 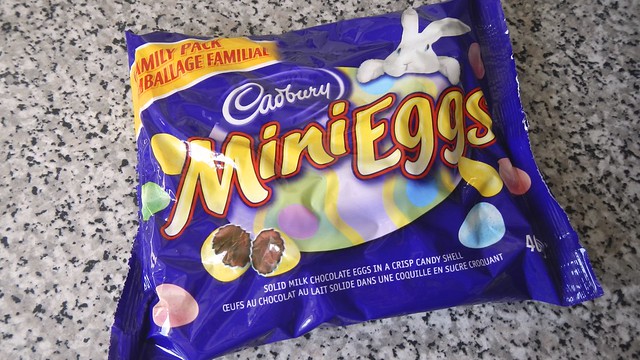 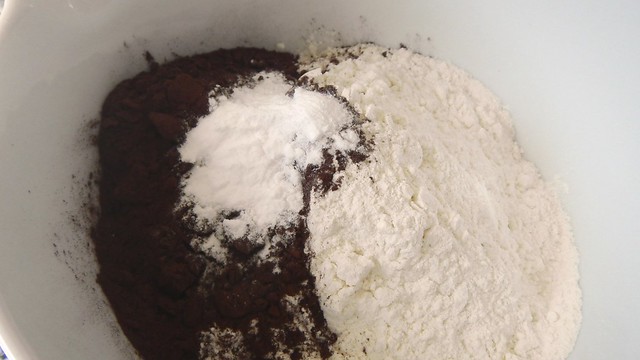 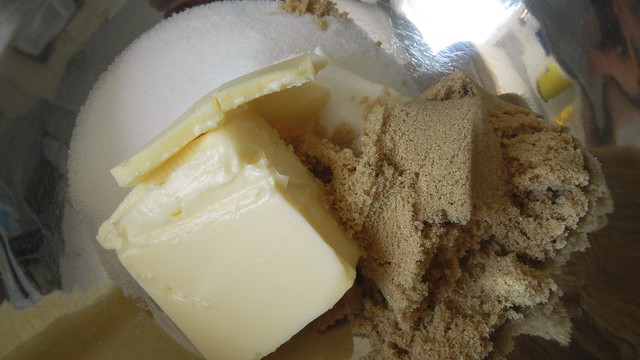 You can do this with a mixer but I did it by hand so as not to wake up my sleeping dogs. We were all having a spectacularly bad day. 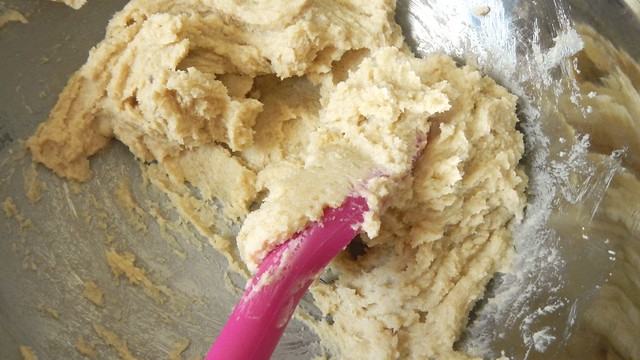 Stir in 1 teaspoon vanilla and 1/4 cup milk or cream. 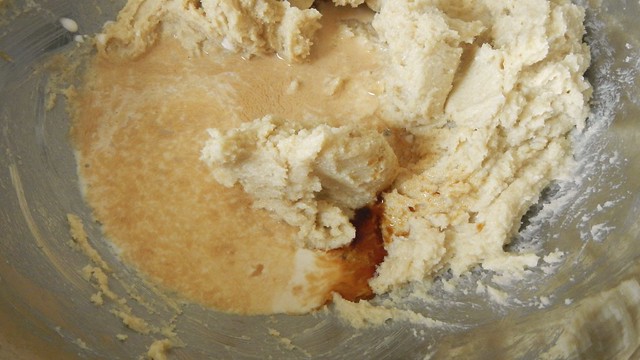 Now gradually add in your flour mixture and stir until everything is uniform. 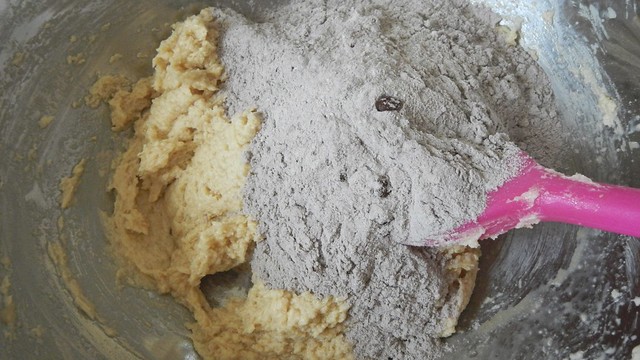 Grab about 1 cup chocolate eggs (Cadbury’s are the best) and smash them up a bit (or don’t smash them, that’s up to you). Chuck them into the dough and mix it around. Now I don’t usually have the patience to chill dough but this stuff is much easier to manipulate if you chuck it in the fridge for at least 30 minutes. 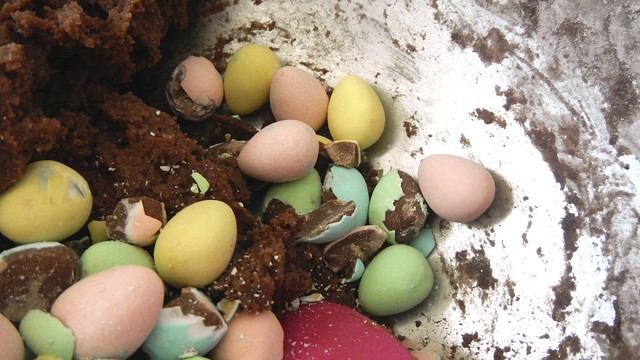 When you’re ready to bake, set your oven to 325°F and line some baking sheets with parchment paper.

Form the dough into little balls and press them onto the baking sheets. These don’t expand very much so you can make them whatever size you want. 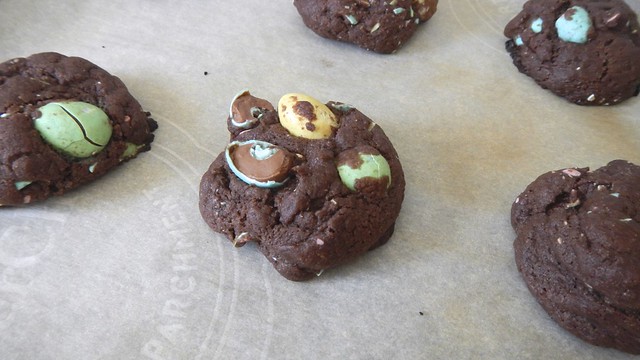 Bake for about 10-12 minutes and remove from the oven to let cool completely on the sheet, on a rack. I don’t recommend moving these until they’re more or less cool as they’re a little unstable when hot. 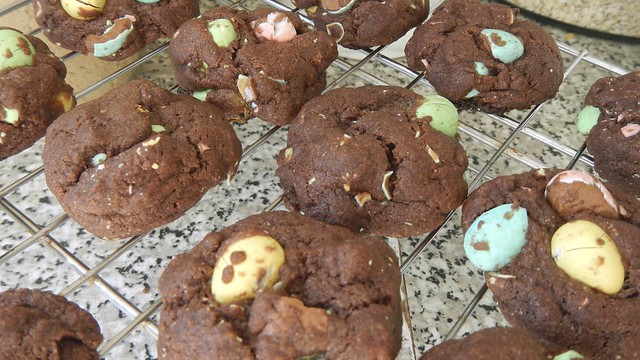 Au gratin dishes are the ultimate in comfort food to me.  If you were wondering, “gratin” is of French etymology, coming from a combination of the words “gratter” (to scrape or to grate) and “gratiné” (having a crust or skin).  So it’s any baked dish with a nice crust on top, usually made with bread crumbs or melted cheese.  So much cheese.

For Easter dinner I bought some new potatoes in homage to spring.  And then I wanted to cover them with cheese, in homage to the fact that the weather is still miserable here and it might as well be winter yet.  This recipe is in essence the same as the one I made with Jerusalem artichokes last year, but with a few tweaks to reflect the season.

Start with your potatoes, however many will fit in the dish you wish to use.  Use a mandolin to slice them super thin.  I prefer them thin over thick, because they cook faster, and it means I don’t have to let them cook in the pan first before putting on the cheese crust.  I can put the cheese on before I bung it in the oven and I don’t have to worry about it burning.  I like to give them a rinse in cold water, too, to get rid of some of the starch.

In a measuring cup, pour about 2/3 cup heavy cream.  Obviously if you’re just making a small dish you can use less.

Fill it to about the 1 1/2 cup mark with milk and liberally add ground black pepper.  Give that a stir.

Grate a whole heckuva lotta cheese.  I have a mix here of gruyère and aged cheddar.

While you’re at it, chop up a bunch of Italian parsley.

Generously butter the dish you want to serve your potatoes in.  Line the bottom with a layer of potatoes.

Sprinkle on some parsley, then some cheese.

Repeat that until you get to the top layer.  Sprinkle on your parsley, then pour your milk mixture all over the whole thing.

THEN cover it with the rest of the cheese.

Pop that baby in the oven and bake until the top is crusty and bubbling, about 25 minutes. Enjoy!