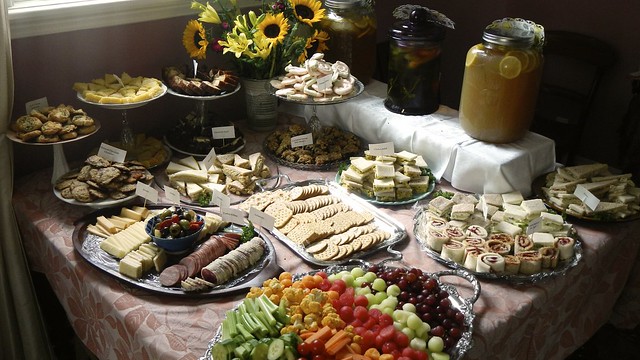 For my parents’ 40th wedding anniversary party I made a large number of cocktail sandwiches – those are the ones where you cut all the crusts off the bread, or you buy the long, already crustless tramezzini (which is what I did). I’m going to give you all my sandwich filling recipes in one post, and I’ll leave it up to you to do with them what you will! 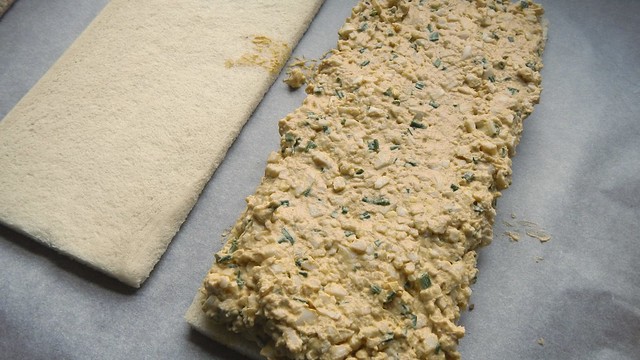 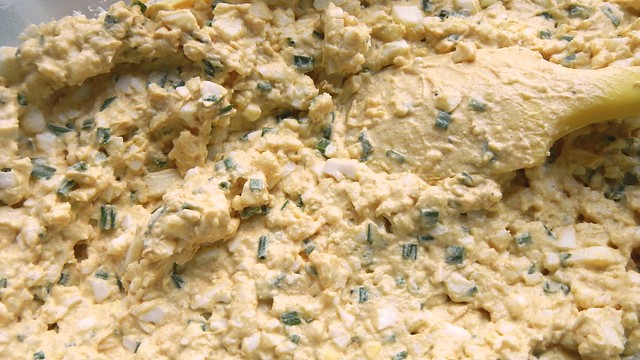 Start with about a dozen hard-boiled eggs. Smush them up good. 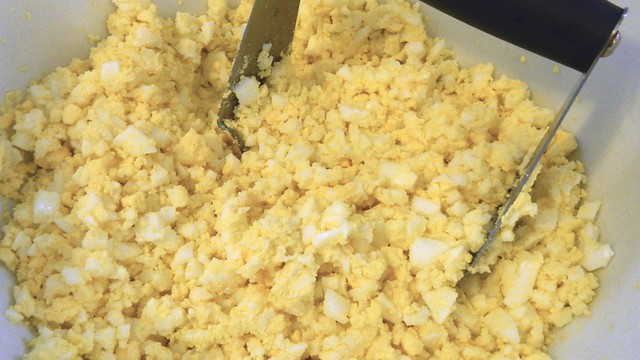 Mince up some chives and tip that into the eggs, together with some salt and pepper, a scoop of Hungarian smoked paprika, and a dollop of mayonnaise. Stir to combine. 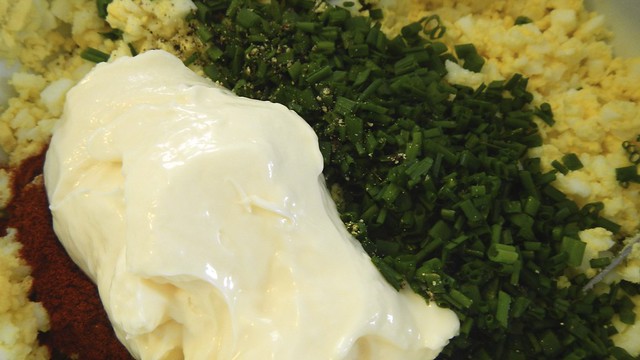 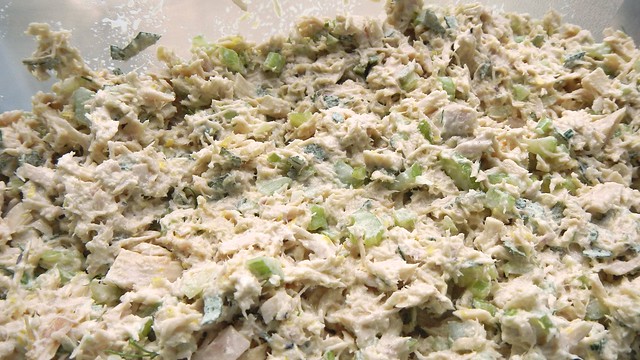 Mince up some celery. 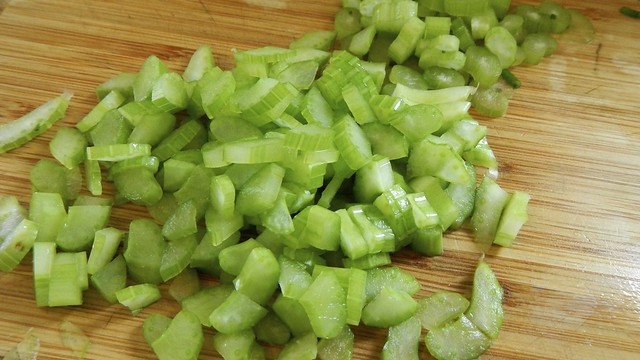 Grab some herbs as well, like sage, and of course dill. Mince those too. 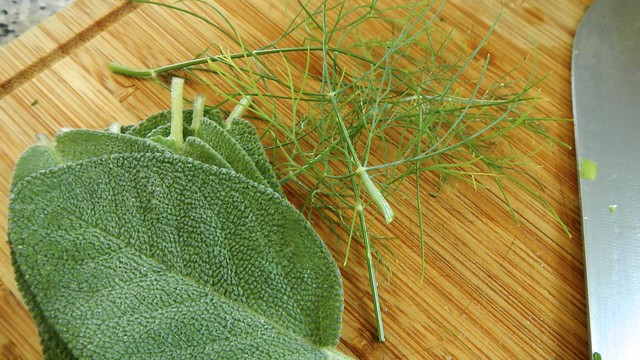 Add them in a bowl with your canned flaked tuna, and the juice and zest of 1 lemon. 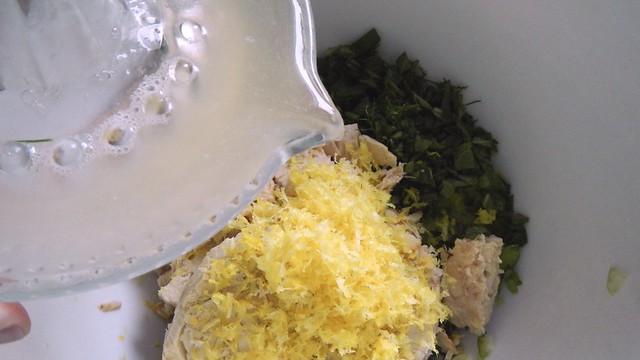 Add in just a wee bit of yogurt or mayonnaise for cohesion. 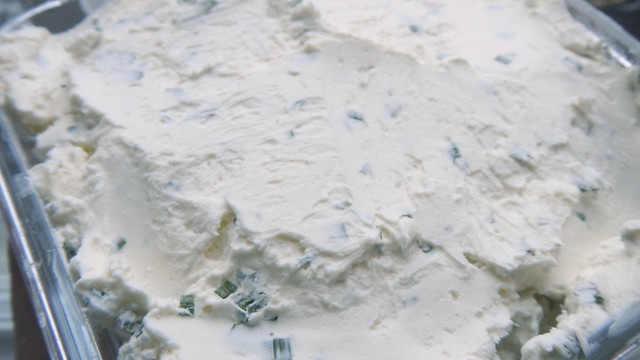 Grab a small handful each of fresh mint and chives. Mince those up. 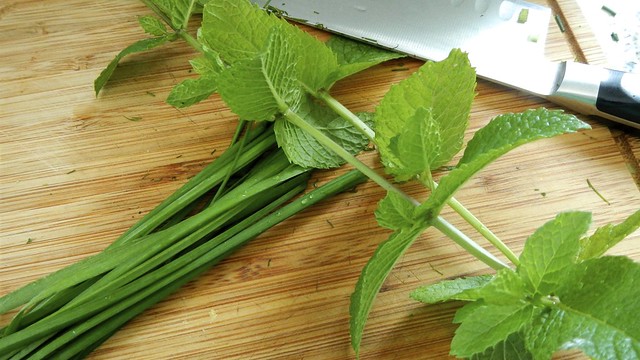 Beat those into softened plain cream cheese and season with salt and pepper. Serve with sliced cucumbers. 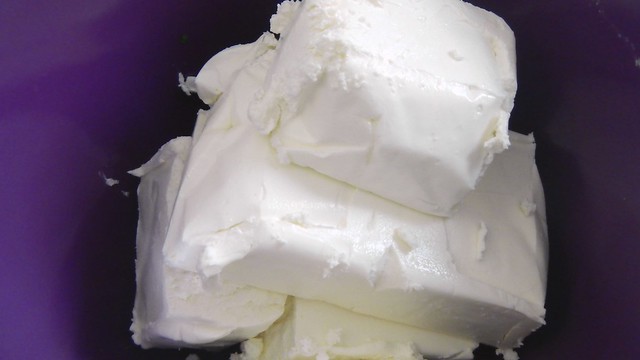 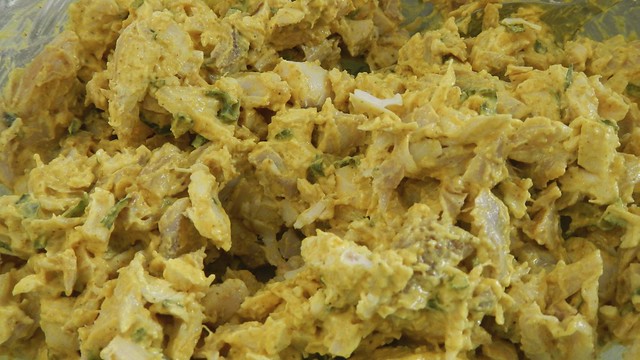 Dismantle and shred a small roasted chicken from the grocery store. Mix in a large amount of fresh chopped pineapple sage, as well as a little bit of onion powder, cumin, yellow curry, and a pinch of cardamom. Tip in plain yogurt or mayonnaise for cohesion. 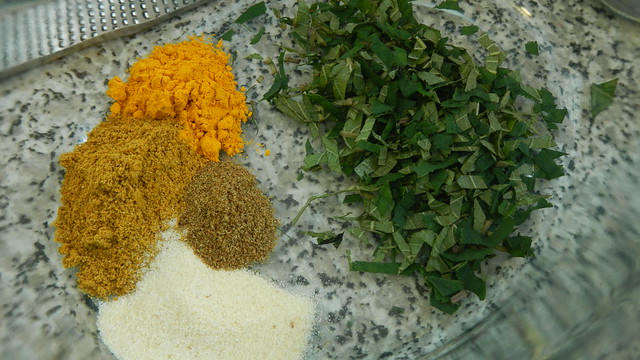 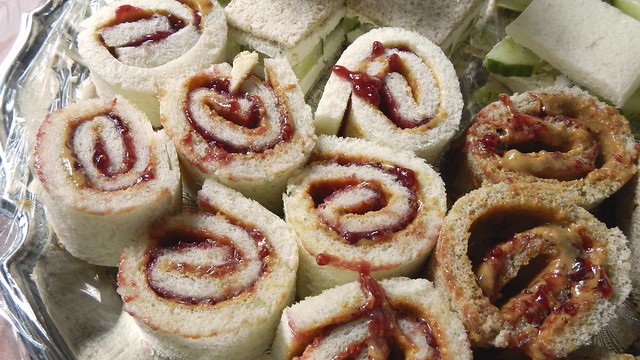 Smear your bread with the peanut butter of your choice (the all-natural stuff is a mite runny, be warned). 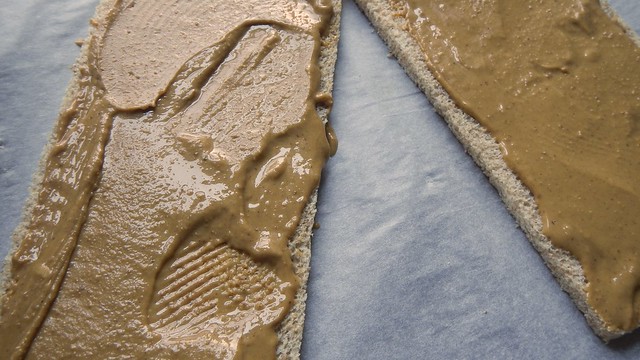 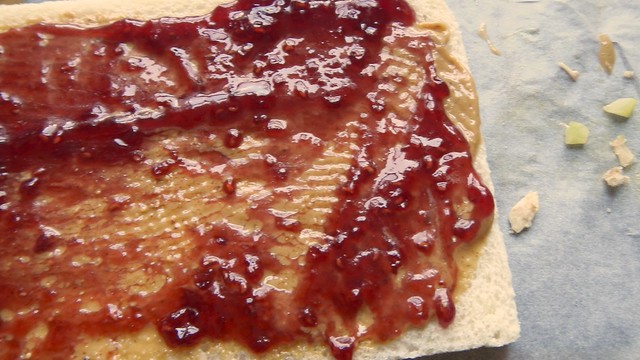 Roll the whole thing up and slice into discs. 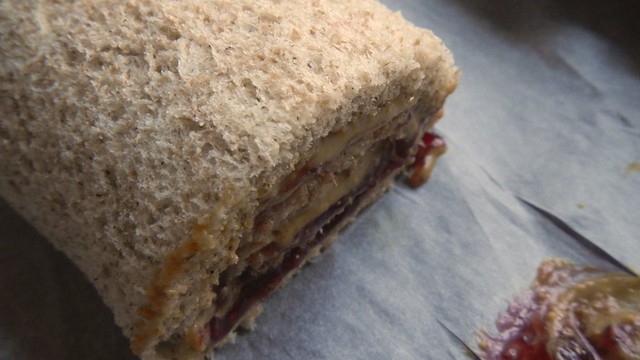 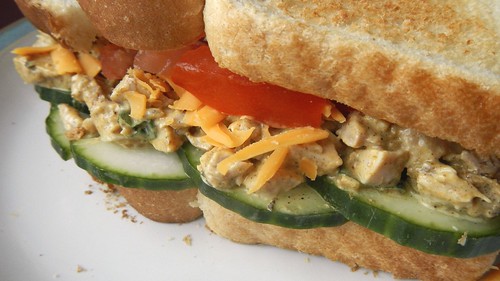 Now, while nothing can really top my chicken salad that can change your opinions on chicken salad, some other versions come close (especially when I make them).  I had defrosted three chicken thighs with the intention of doing something else with them, and then I didn’t. So I had three pieces of raw chicken in my fridge that needed cooking — and soon.

I roasted the thighs (45 minutes at 350°F) the night before with some cajun spices sprinkled over top.

Then I dismantled them by removing the bones and chopped them into small pieces. 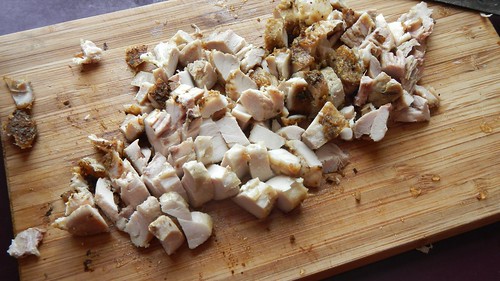 I grabbed a knob of fresh ginger and cut off a bit about the size of a loonie. 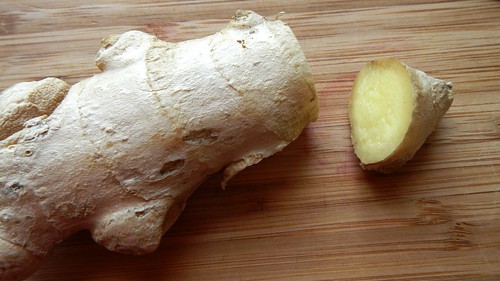 Peeled it and sliced off paper-thin slices. 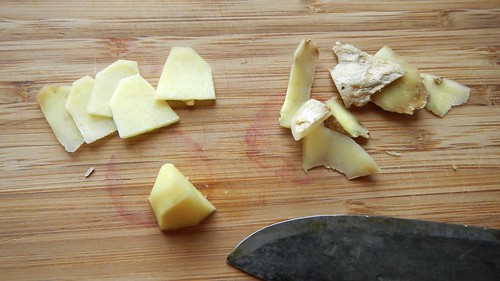 Which I then minced. 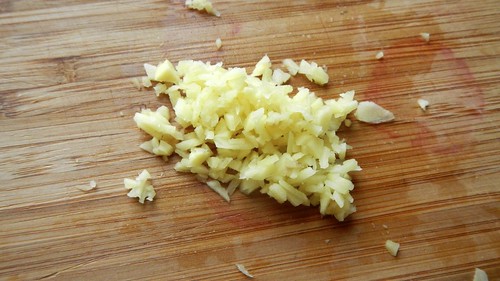 Sliced up some green onions. 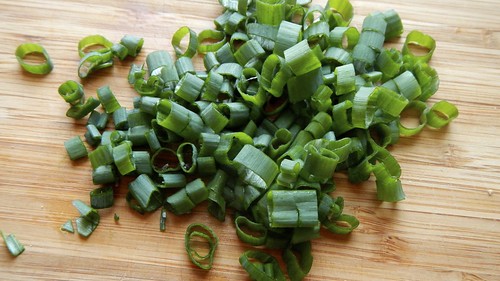 Tossed the ginger and the onions in a bowl with some cajun seasoning, curry powder, cinnamon, and lemon juice. 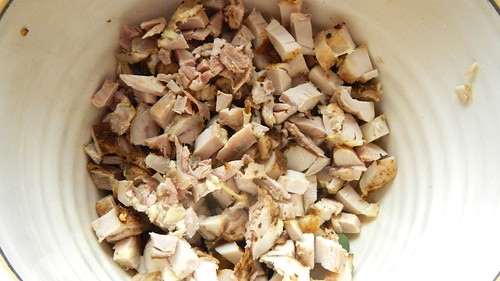 Then a generous helping of mayonnaise (everyone’s preference for how much is different so I’ll leave that to you) and a vigorous stirring. 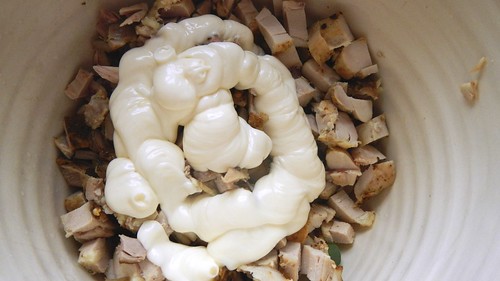 I decided to put some in a sandwich, so I made a nice cucumber base … 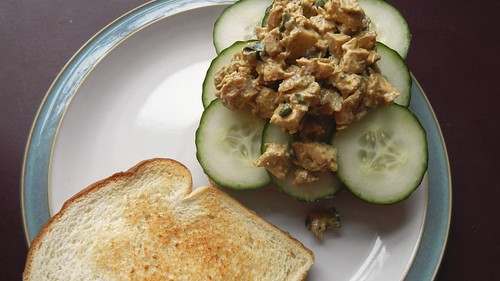 … and topped the salad with some chopped tomato and grated cheese left over from a taco night in recent history.  Waste not … 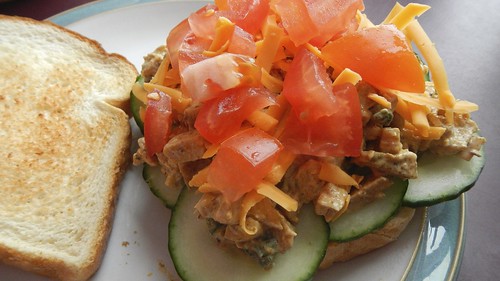 It was a GOOD sandwich.  Hit the spot perfectly. 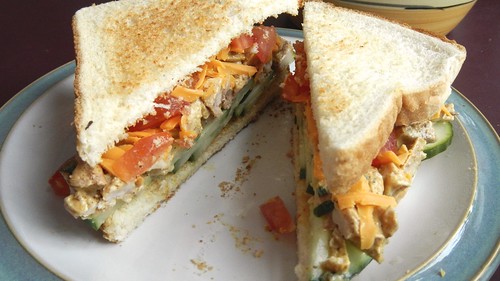 The Pie’s parents, Mrs. Nice and Papa John, are in town on a visit for the Pie’s graduation (B.Sc. Honours in Geography and Computer Science, booyah), so I get a good number of opportunities to cook new things that I think might appeal to them.  This one I made with Mrs. Nice in mind, and reminds me somewhat of that amazing orzo salad we had at Ferryland a few years ago.

Prep your vegetables.  Dice up half a large red onion, 1 red pepper, and half a large cucumber (I cut out the seeds).  I also halved 250g grape tomatoes and defrosted 1 cup each frozen corn and frozen peas.

Close the lid tightly and give that a shake.  Let it sit for a while.

Fill a large saucepan with about 4L of water and salt it generously.  Put it on to boil.  When it’s boiling, remove the lid, turn the heat down a bit, and pour in 450g orzo pasta.

While that’s on the go, cut up about 3 boneless skinless chicken breasts into small cubes and  pitch those in a frying pan or skillet with a bit of vegetable oil.

Sauté those until fully cooked and browned on the outside.  Remove from the heat.

Drain your orzo and plop it in a big bowl. This bowl was not big enough.

My peas and corn were still a little frozen so I added them to the still-hot chicken pan to let them thaw properly.

Then I chucked in the rest of the vegetables and stirred that around.

Then you just add your veg to your pasta.  Give that a good stir.

Give your dressing another shake and toss that with all the rest of your salad (don’t worry about the amount — it will be absorbed into the pasta) and serve warm or cold.

When the Pie and I first started dating, we both had a lot more money than we do now (read: we have NO money now, and then we HAD money).  So we used to go on these elaborate dates, which were so much fun.

On this one in particular, it was my turn to plan.  We started out picking raspberries from a local farm (where I got bitten by a dog and I still have the scar, seven years later, but that’s another story), followed by a picnic lunch in a village park, a game of mini-golf (where I soundly beat the pants off the Pie), a nap, and then a late dinner at a fancy restaurant downtown.  A good time was had by all.

But this story is about the picnic.  As I said, we had only been dating a few months, and I wasn’t yet fully versed on the Pie’s various food likes and dislikes (he insists he’s not a picky eater, but the rest of us look at each other and shake our heads).

To impress my new man, I had prepared a sumptuous picnic feast, featuring as a main course my signature chicken salad sandwiches with moist, tender chicken, crisp celery, and just a hint of spice.

It turns out that the Pie didn’t like chicken salad.  Note that I said “didn’t.”  He gallantly took a bite of the sandwich, to be polite (after all, I had made him two sandwiches in anticipation of his appetite).  Instantly, he was converted.  Now he gets chicken salad all the time when he buys sandwiches.

So here is that recipe for you.  Go forth and proselytize!

We had 2 boneless, skinless chicken breasts that we’d poached the day before.  The trick with chicken salad is to mince your chicken.  Most chicken salads have these huge chunks of chicken in them, which, while tasty, tend to fall out of your sandwich all over the place.

So MINCE those suckers.

Also mince up a few stalks of celery.

Mix the celery into the chicken.

Now add about a teaspoon of paprika, and 2 teaspoons chili powder.  You can add more if you like the taste.

Glop on about 2/3 cup mayonnaise (don’t skimp here, people, and use real mayo).

Mix that stuff up.  Garnish with a festive sprig of basil and you have yourself some salad.

Have you ever converted anyone to a food?