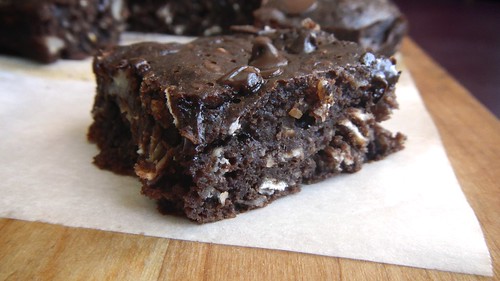 When Atlas posted this recipe to my Facebook newsfeed and suggested I make it for the next time we went over for dinner, I knew it wasn’t really a suggestion.  I didn’t have some of the ingredients on hand (because as we all know I’m a huge fan of butter, eggs, and refined sugar, and that’s not likely to change any time soon), so I did make some substitutions.  If you’d like to go for the original version, just check it out at Eat Drink Love. 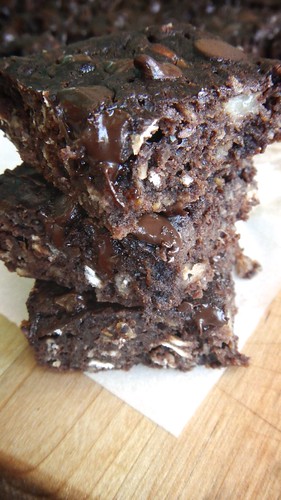 Start by preheating your oven to 350°F and spray a 8″ x 8″ baking dish.  Line the dish with parchment paper so that you have two little handles sticking out. 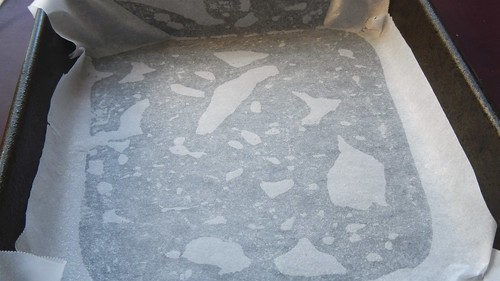 Grind up about 2 tablespoons flax in your coffee grinder (wipe it out before and after of course, or use a separate one). Flax is amazing for you, but it will do you no good if you don’t grind it up first. 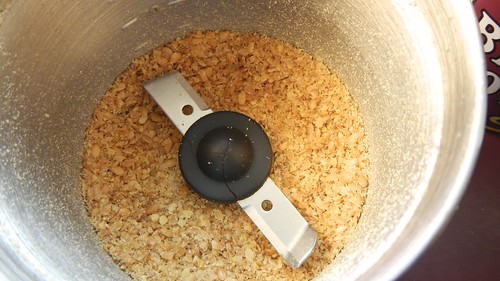 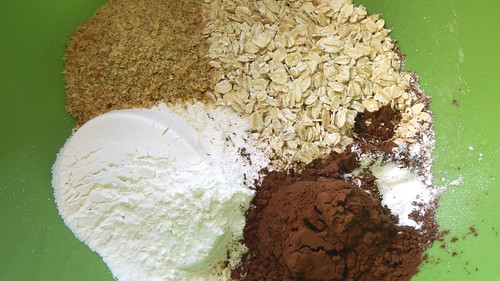 Give that a good stir. 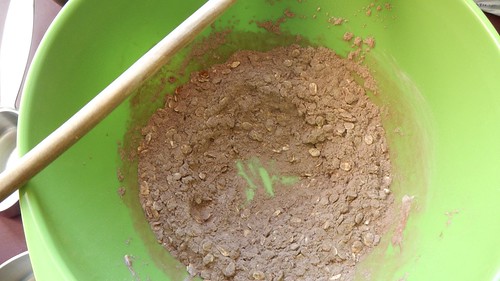 Find a lovely ripe banana and smush it up with a fork. 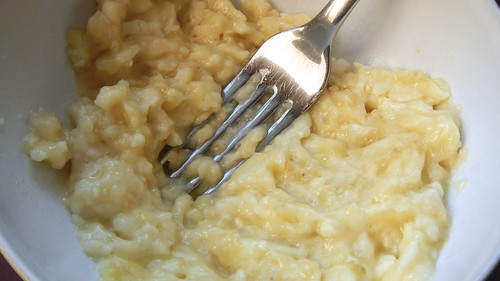 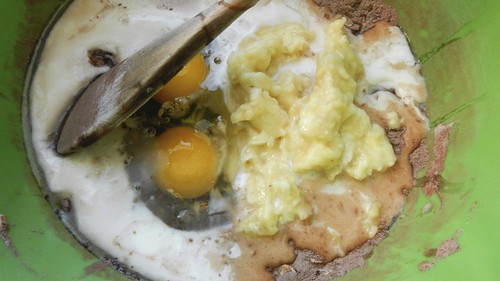 Stir that around and then slop it into your prepared pan. 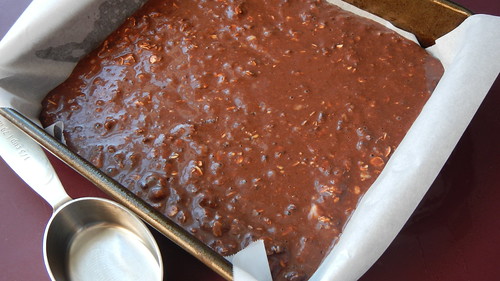 I forgot I was supposed to stir these in and so I sprinkled 1/4 cup chocolate chips on top.  Very decorative. 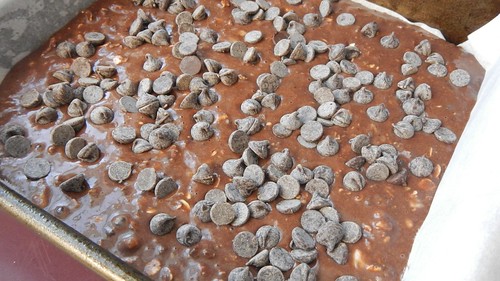 Bake for 17-20 minutes, until the centre is solid and tests clean with a toothpick.  Set on a wire rack to cool completely. 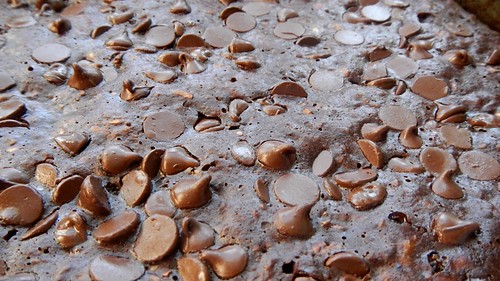 After cutting the brownies into little pieces, store them in the fridge. 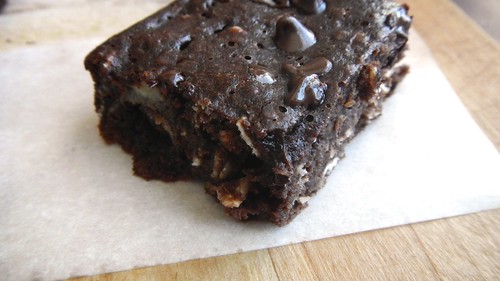 To be honest, I wasn’t a huge fan of this recipe.  I don’t like baking with coconut oil as I find it too heavy and greasy, and so that’s all I could taste, but everyone else seemed to like them just fine.

In this country, buttermilk is only available at the larger grocery stores in 1-litre cartons.  So after we made buttermilk pancakes the other day, we had 3 1/2 cups of buttermilk left to deal with.  I know that some people drink it as a beverage, but I can’t quite bring myself to do that.

I found this recipe from Canadian Living, and, as I happened to have some bananas handy, I figured I’d give it a try.

So.  Grab two nice soft bananas (not overripe, but sweet enough) and mash them up with a fork.  This will give you about 3/4 cup mashed banana.  And if it gives you more, then just roll with it.

Preheat your oven to 350°F and line a standard muffin tray with cups.

With an electric mixer, cream together 1/2 cup butter and 3/4 cup packed brown sugar until they’re pale and fluffy.  If you think you’ve beaten them enough, just hold off for another minute or two.  Trust me, it’s worth it.

Add in an egg.  I didn’t want to put this one in because the speckles were so pretty.

Alas. So long, fella. You were a good egg.

Now work in your banana, as well as 1 teaspoon vanilla.

Spoon that glorious banana-y-ness evenly into your 12 liners and bake for 20-25 minutes, until a toothpick inserted into the centre of the centre cupcake comes out clean.

The recipe didn’t give me any options for icing (though the Pie and I think either a mild lemon icing or a mocha cream cheese, or even straight Nutella would work really well), so I decided to do a dusting of cinnamon sugar.

In a small bowl, mix together 1/4 cup granulated sugar with 1 tablespoon cinnamon.

In another bowl, melt 1/4 cup butter.

While the cupcakes are still pretty hot, paint the tops with butter. Despite what the picture shows, it’s easier and tidier to do this while holding the cupcake upside down over the butter bowl. But I only have so many hands.

Then dip each cupcake into the sugar so the tops are entirely coated.

I actually coated each one once, then, after the butter had permeated the sugar a bit, dipped them again. Then I let them cool completely on a wire rack.  So tasty, with a nice crunchy top!

I’ve been craving baked goods recently but with the food-heavy holidays coming up I don’t want to overdo it this early in the season.  The answer to my delicious dilemma?  These hearty food-filled muffins from Sweet Mama.

Preheat your oven to 400°F and spray a muffin tin with cooking spray.

Grate up 1 small zucchini and 1 medium carrot — you’re trying for 1 cup of each.

Mash up 2 small bananas with a fork — again, you’re looking for 1 cup banana.

Add in the mashed banana and the grated carrot and zucchini.  Add in as well 1 cup unsweetened shredded coconut.  Mix it up well.

Add the dry ingredients to the wet mixture and stir until just combined.

Spoon into the muffin tins.  I sprinkled mine with a wee bit of cinnamon sugar that I had on hand.

Bake for 20-25 minutes, until the muffins are brown and a toothpick inserted in the centre of the centre muffin comes out clean.

Leave in the pan for a few minutes and then transfer to a wire rack to cool completely.

It seems like Canadian cuisine is all about the different ways you can fry bread.  I’ll take it easy on you for the rest of the week but we’ll go with one more to end the month.

If you’ve ever done any touristy stuff in Canada you probably have tried Beaver Tails.  They’re especially good after a day of skating along the Rideau Canal, the longest outdoor skating rink in the world.  With a nice hot chocolate.  You can get them at fairs, too, and in the States (though they call them “elephant ears” there, what a silly name).

You can’t get them around here.  The franchise hasn’t moved this far east yet.  So I got the recipe from here, from a genius lady who has come up with her own form.  It makes about 20 pastries, so feel free to halve it.

Start with your yeast.  Mix a pinch of sugar with 1/2 cup warm water in a large bowl and sprinkle 5 teaspoons active dry yeast.  Let that sit for a few minutes until the yeast is all dissolved.

Then add 1/3 cup granulated sugar, 1 1/2 teaspoons salt, and between 4 1/4 and 5 cups flour.  You may need more or less, depending on the vagaries of the weather and whatever else is going on in your life.

Stir that baby up real good until you have a dense but pretty elastic dough.

Knead the dough on a floured surface until it’s not tacky anymore.  This will take about 5-8 minutes or so.

Drop it in a greased bowl and cover it with a tea towel.  Leave it in a warm place to rise for about 30-40 minutes.

Look it at.  All nice and risen.

Punch that sucker down.

Pinch off a golf ball-sized hunk.

Flatten it out into an oval.

Plop those suckers on a tray and cover them with a tea towel while you heat your OYLE.

When your oil is hot enough to fizzle a pinch of flour, you can start yer fryin’.

Before you fry your ovals, stretch ’em out a little so they look a little bit more like beaver tails.

Slide them in one end at a time.  You can fry probably two at once, maybe two minutes per side.

Let them drain on paper towels and cool enough so they don’t burn your face off when you eat them.

Now you have a range of toppings to choose from of course.

How about chocolate hazelnut spread with bananas?

The Pie had himself some jam and peanut butter.  And banana.  He’s a fan of all three.

And of course my favourite: cinnamon sugar with lemon.