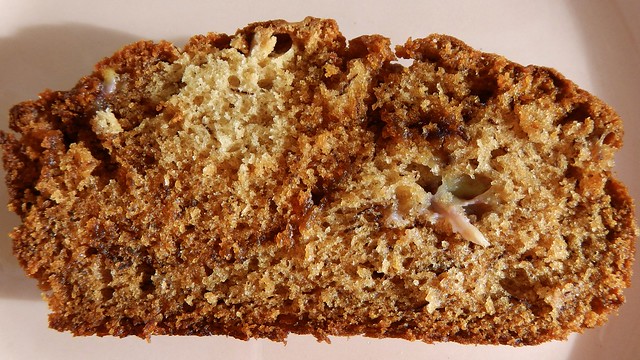 Banana bread freezes really well, and so it’s a great thing to make in advance for something like my upcoming shindig. Because it’s a fancy shindig, I wanted to make it with a bit of a twist on my traditional recipe. And while I’m on the bourbon caramel theme this week, I figured I might as well make me some fancy banana bread! I used my original recipe (see link above), but instead of using very ripe (pre-frozen) bananas I used yellow ones, because I wanted a few chunks in my banana bread. And of course I made up a bourbon caramel sauce, which I borrowed from the Minimalist Baker. So first we’ll make up the sauce, and then we’ll re-make our old classic banana bread. 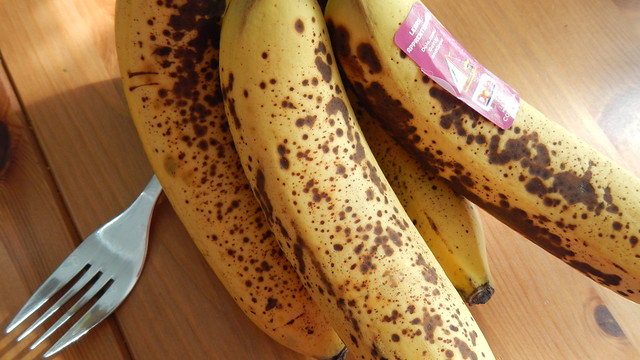 This caramel sauce! I’m definitely of the Keep It Simple, Stupid school of thought, so I love the 4-ingredient easiness of this recipe. And now I want to drink the stuff. It’s amazing. I doubled the original recipe because I anticipated loving it and wanting to drink it, but it makes a decent amount for a generous swirl of caramel throughout the banana bread (if you leave like half a cup leftover for yourself to eat with a spoon). 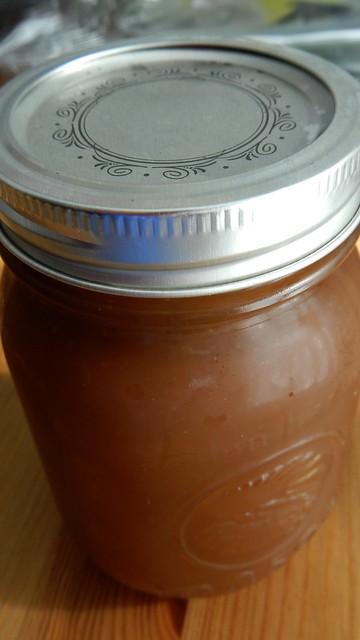 Start with 2 cups granulated sugar and plop that in a medium saucepan together with 1/2 cup water (in this 4-ingredient recipe, water does not count as an ingredient. It evaporates so technically it doesn’t exist!). 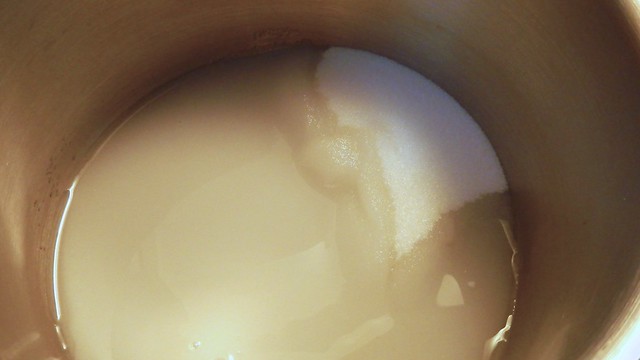 Heat that on medium high for about 15-20 minutes. Don’t stir: just swirl the pot occasionally. 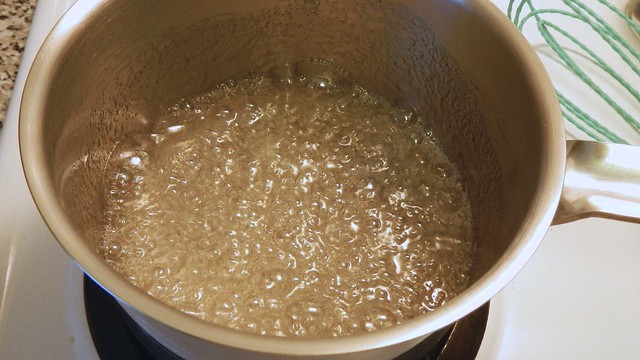 You’ll get bored, but you can’t leave. So enjoy a glass of bourbon while you’re waiting. 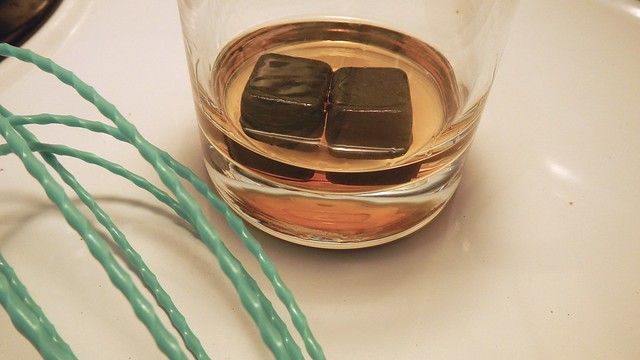 The sugar will begin to boil, and then, as the water evaporates, the bubbles will get smaller and smaller. 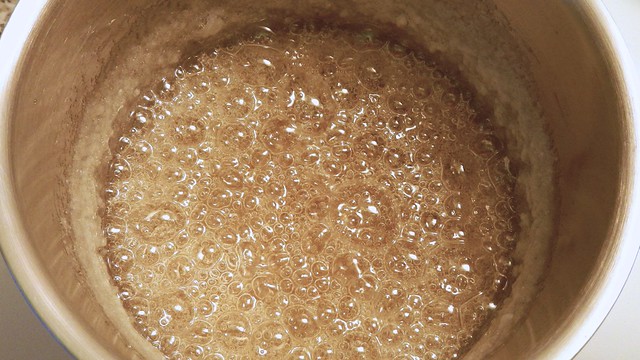 Eventually the mixture will turn a lovely amber colour and will only be kind of fizzy. 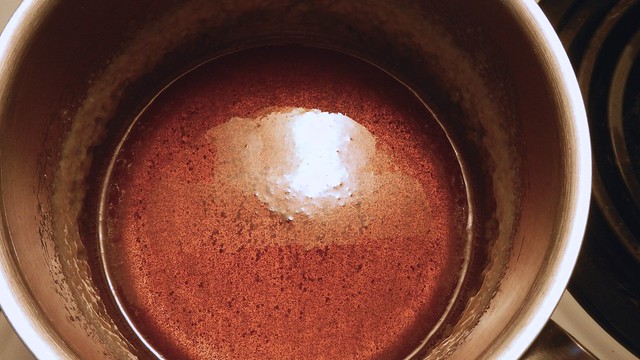 At this point, remove it from the heat (turn off the burner) and, whisking the whole time, drizzle in 1 cup heavy (whipping) cream. Don’t freak out as it fizzes and foams up around you. Just keep whisking. I usually sing a song to a volcano god while I do this. I always feel like I’m summoning a creature from the depths when I do science-y things like make caramel. 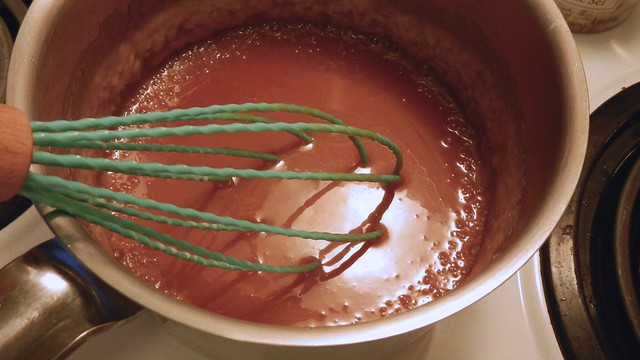 When you’ve got the cream all whisked in and the whole thing has calmed down, put the pot back on the still-warm burner and tip in 2 tablespoons bourbon (I used Maker’s Mark). This time it will only fizz a little bit. Add in as well a few pinches of salt – I used fleur de sel. 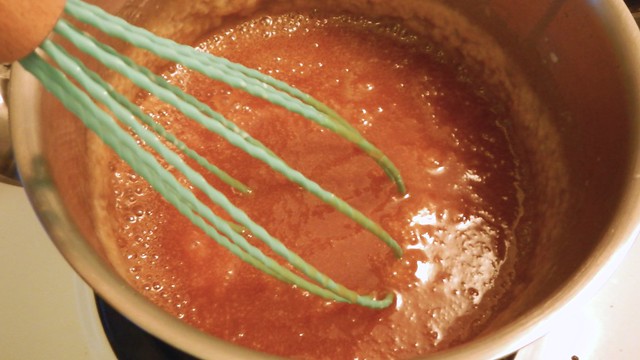 Pour into a heat-safe container and let cool before storing in the fridge. If you want to use this for other things then just warm it up a bit and then it will become pour-able again. I kind of like the finger-scoop-y texture of it when it’s cold though. 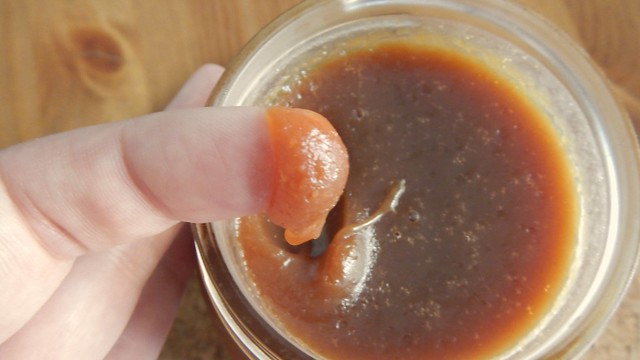 I’m having a hard time giving up even a little bit of this for banana bread. But I gotta do what I gotta do. 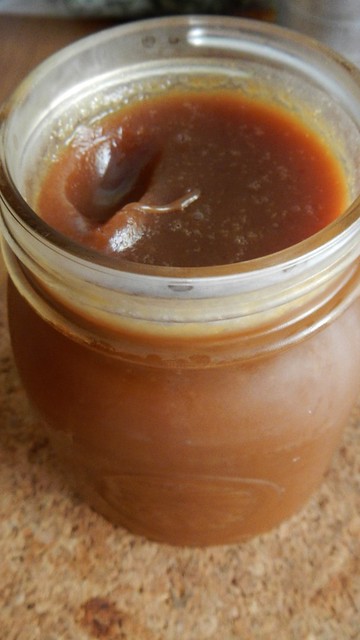 So. Let’s do some banana bread. Preheat your oven to 350°F and line two loaf pans with parchment paper. 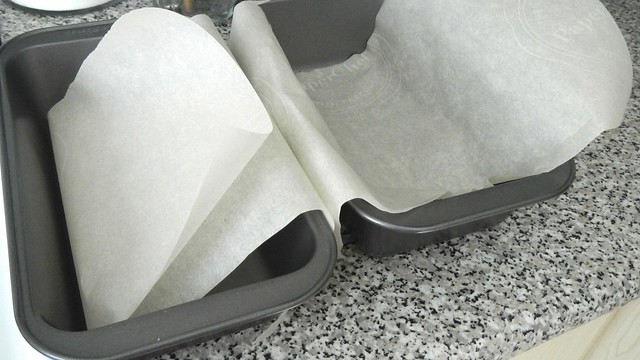 Grab 5 bananas. You can use overripe or frozen bananas but this time I decided to use ones with a bit more substance to them – of course I waited too long to do the recipe and they’re a little spotty but whatever. Nobody ever said I was the proactive blogger. 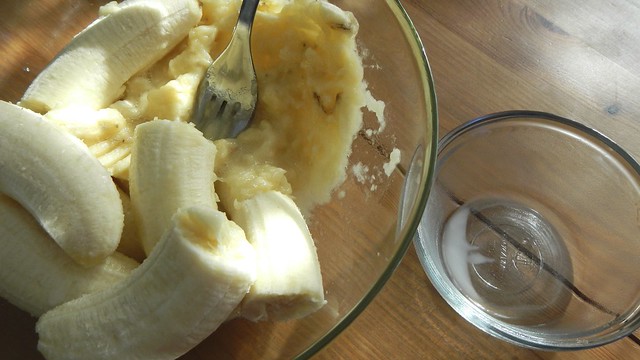 Mush, mush, mush ’em into a small bowl together with 1 tablespoon baking soda that has been “dissolved” in 3 tablespoons hot water. Put that bowl to one side for a minute. 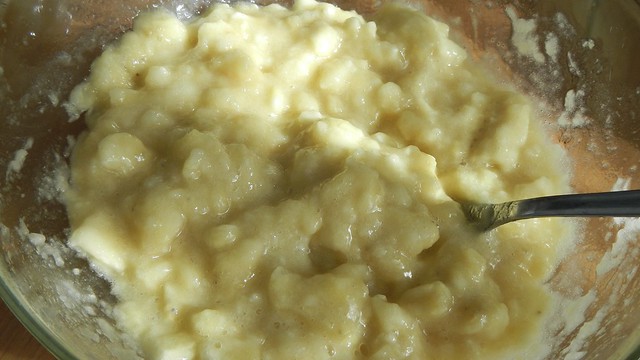 Grab another, medium bowl and plop in 1 cup room temperature butter. Beat that silly with 1 1/3 cup granulated sugar until you get a serious case of the fluffy butters. 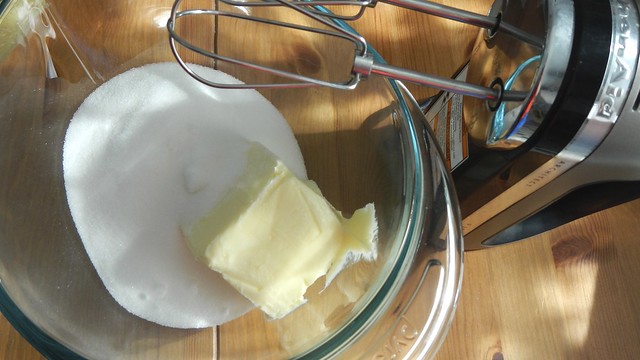 Then crack in 2 eggs and beat that until it’s a coagulated mess. Mmmm … Line this bowl up with the banana bowl and leave those for a few minutes. 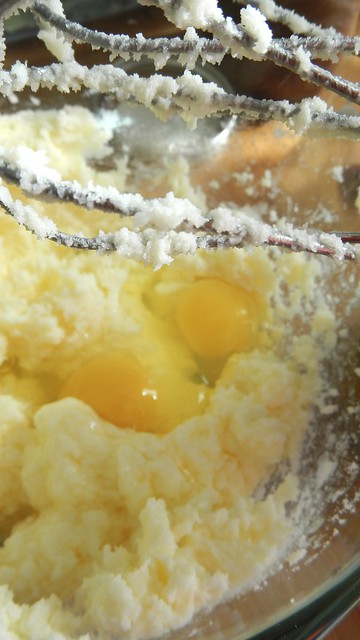 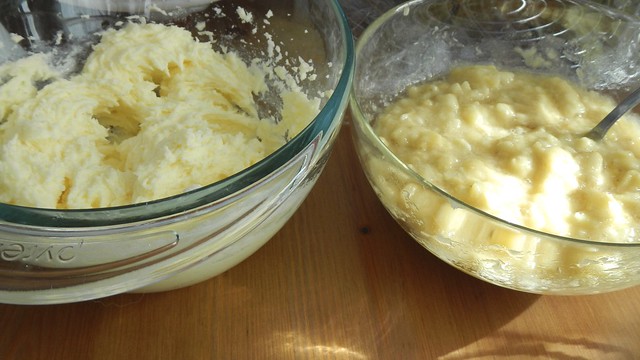 In ANOTHER bowl (this time a decent-sized one), sift together 3 cups all-purpose flour and 2 teaspoons baking powder. 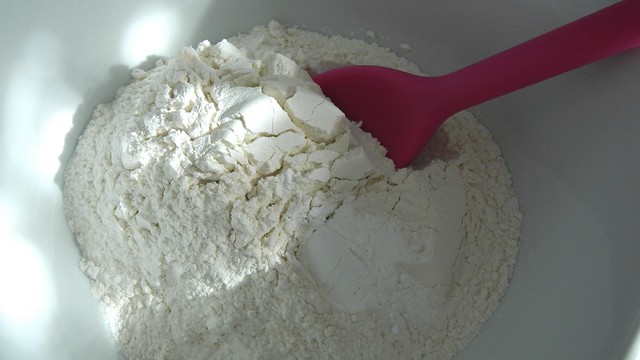 Now we put it all together. Beat the banana mixture into the egg mixture and then tip it into the flour mixture. 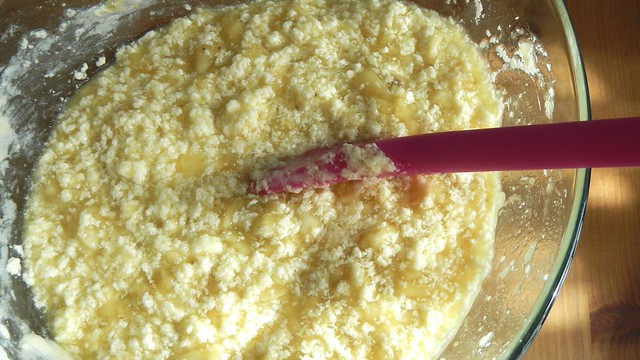 Fold the flour mixture into the banana mixture until it’s all combined. 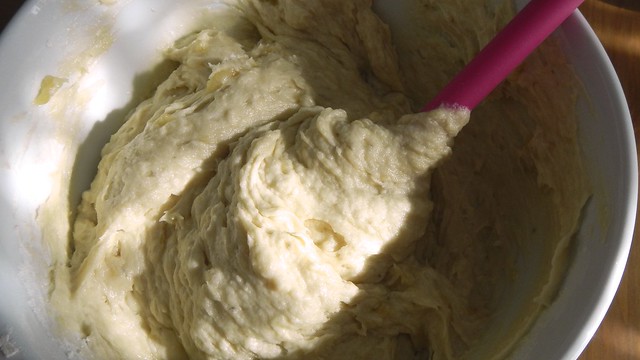 NOW, glop a bunch of your caramel sauce into the batter and kind of swirl it through gently. Don’t let it get too mixed in – you want streaks. 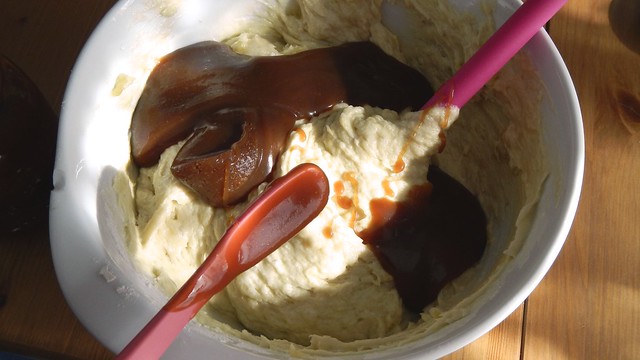 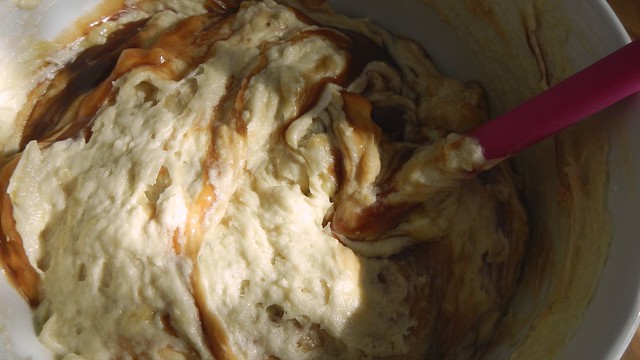 Tip the batter between the two loaf pans and bake for about 45 minutes, or until the loaves are cooked through and a toothpick inserted in the centre comes out clean. 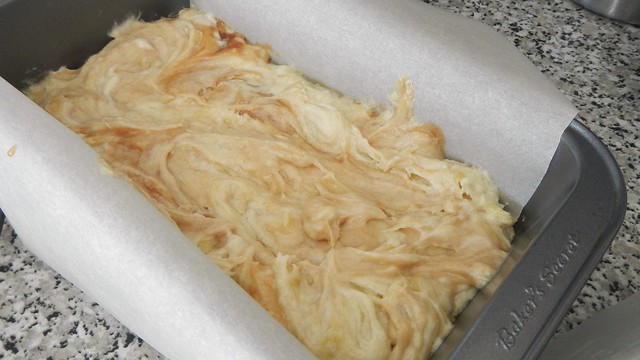 Use the parchment paper to lift the loaves out of the pans and let them cool completely on a cooling rack. 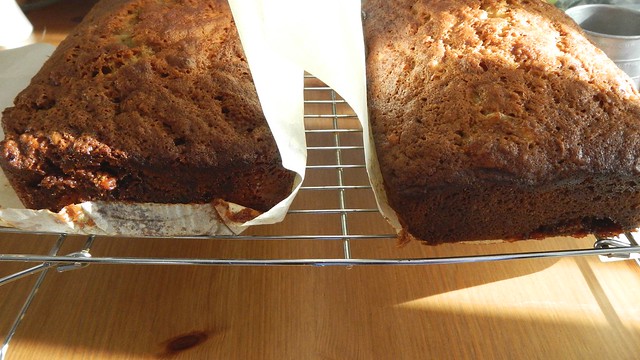 Freeze or cut and serve with butter. MMMMMMM! 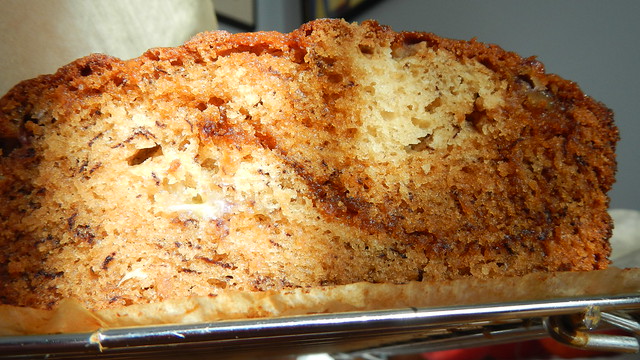