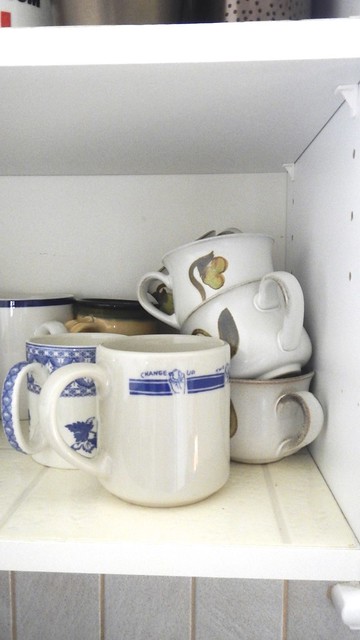 Ever so slowly the Pie and I are beginning to tackle parts of the house where when we moved in we found a temporary solution and left it at that for the nonce. One of these areas is the kitchen. Every week I try to tackle one cupboard or drawer to make it make a bit more sense. This week I was browsing through one of the million or so emails that Martha Stewart sends me (because, y’know, we’re like, besties), and I saw something that totally blew my mind. This was the current configuration of my mug cupboard, with my Denby teacups stacked haphazardly on top of each other, tipping every which way, and my saucers stored in a totally different cupboard, with my dessert plates. 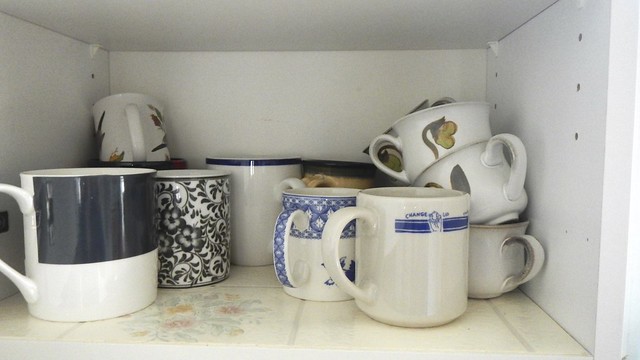 Turns out, that’s crazy pants. If you store your cups and saucers together, in fact, if you store them alternating cup and saucer, stacked on top of each other, you get a more stable stack, and a much more streamlined tea-making process, as you can just grab however many sets of cup and saucer that you need at any given time. 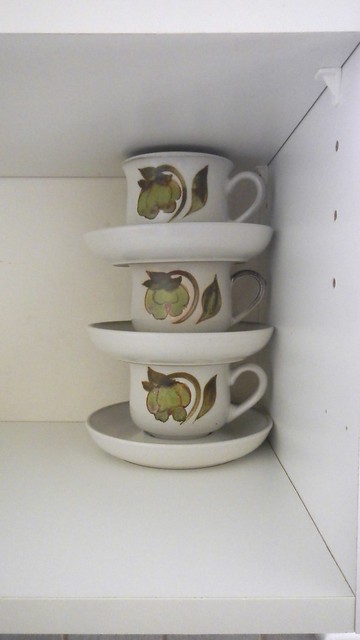 Plus the stack is much more stable and damage to your more delicate cups is less likely to happen. My Denby ones will sustain a nuclear blast but if I HAD tiny delicate ones I’d do it the same way. 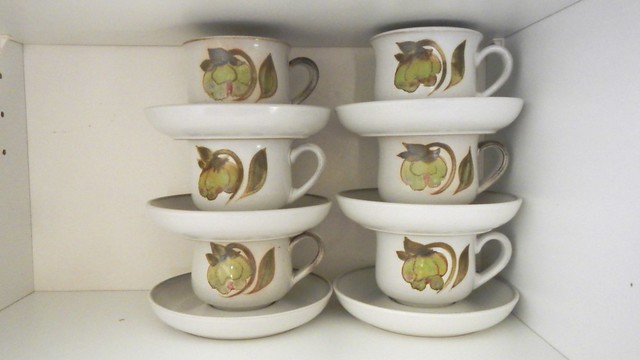 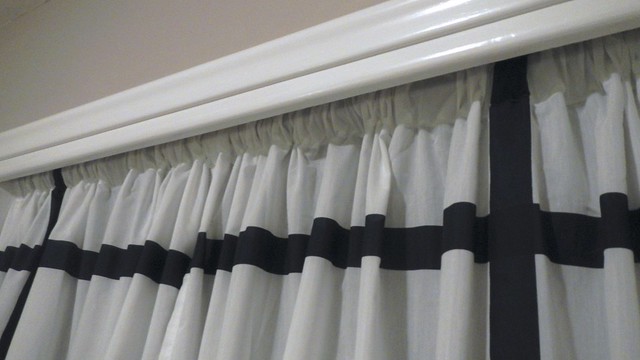 When we bought the house we knew that the sliding closet doors in the master bedroom were totally broken. 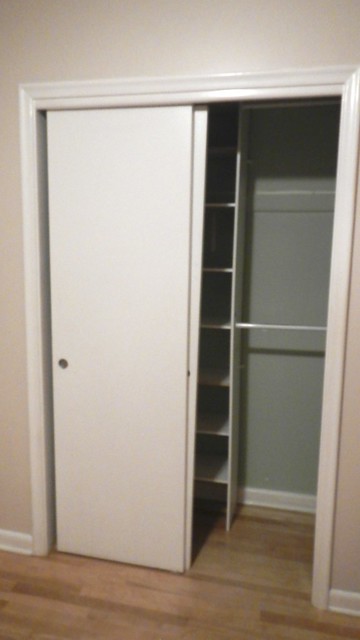 So as soon as we took possession we ripped them out. But now we’re looking at the contents of our closet (or the quarter-unpacked contents) on a daily basis. While we have plans to eventually install a set of bifold doors or something similar, it’s not high on our list of priorities. 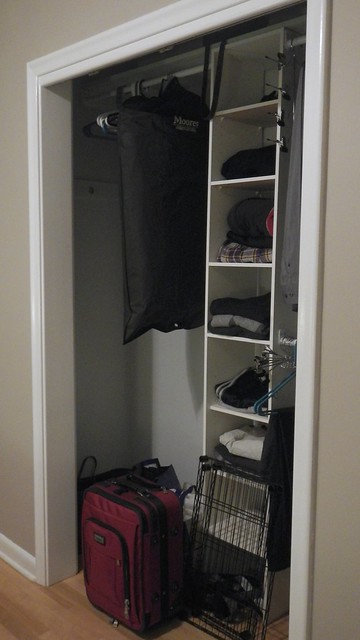 I’m happy to see them gone. With such a narrow door frame having half of it blocked by a giant door would have made the closet so hard to access. It’s already kind of ridiculous just in the layout as it is. 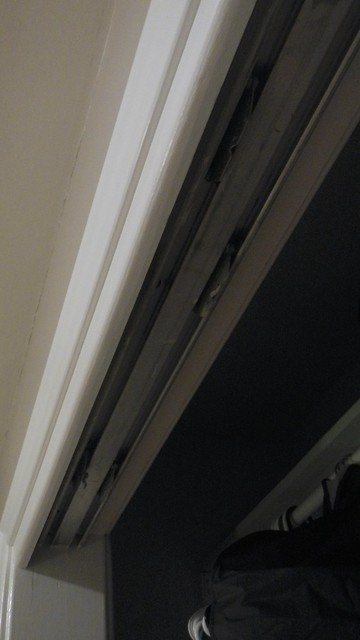 So in the interim, I’ve got our old pressure curtain rod from the bathroom at the Tower and the curtain from our old office. No need for anything go to waste. It had a bit of rust on it from the shower (because it was cheap) so I just rubbed it with some CLR and we were grand! 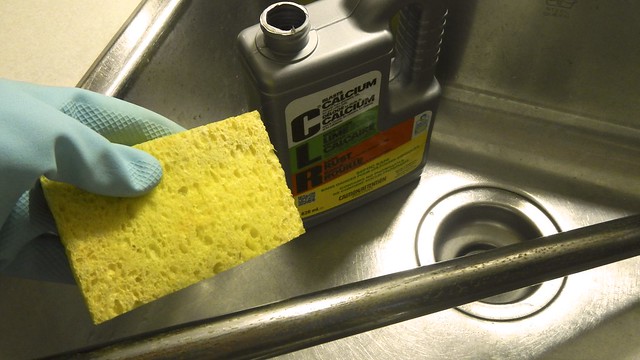 A quick fix to hide our messiness, and just a quick job to hem the darned things (when I get around to it). TADA! 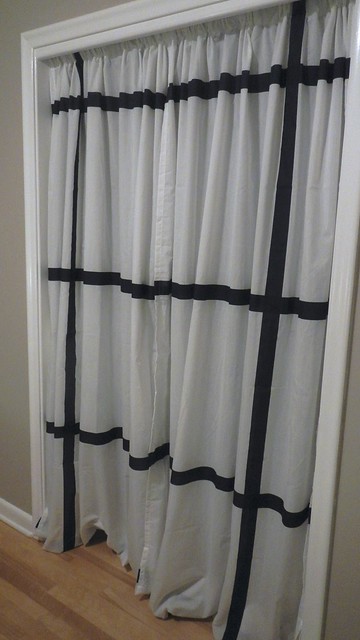 I promise we’ll be returning to regularly scheduled programming soon. I’m sure that you’re getting a little tired of seeing my messy house so I’m going to try to change things up a little bit. But in order to do that I need to do things like this. My entranceway for the past week has been the place where we drop all the random bags and boxes we’re still bringing over from the Tower, and we haven’t really had much opportunity to deal with it. So when you walk into the house your first impression is one of utter chaos. 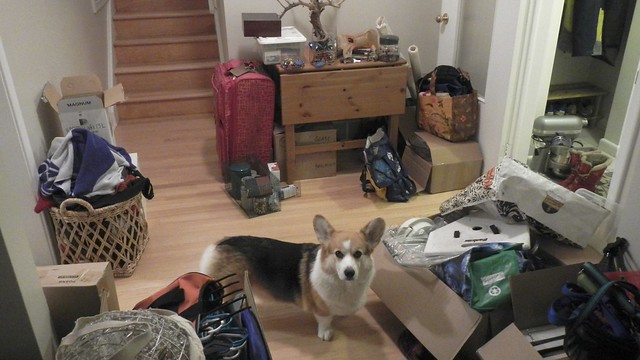 Organizing your home can seem overwhelming at first, especially if like me you have just moved and you’re dealing with a whole lot of extra space and no idea what to do with it all. It’s hard to know where to start, so it’s easy to get distracted: you move something into another room, realize that something in that room needs to be organized/put away/cleaned/moved elsewhere, and then it just snowballs and after a few hours you’re exhausted and you realize you’ve accomplished NOTHING.

So my trick is to take it one room at a time. First, you take the things that don’t belong in that room and put them elsewhere. Not just any elsewhere, mind you: put them in the room where they belong, and, if it’s something you can do quickly, put them away where they should go. If it’s not a quick job, just stash the whatever-it-is in the room where it should be and go back to the room you’re working on. You can deal with putting the whatever-it-is away properly when you finish what you’re doing and move to a new room.

Before you know it, the room will be empty of all that does not belong and you can now find space for all the things that DO belong. 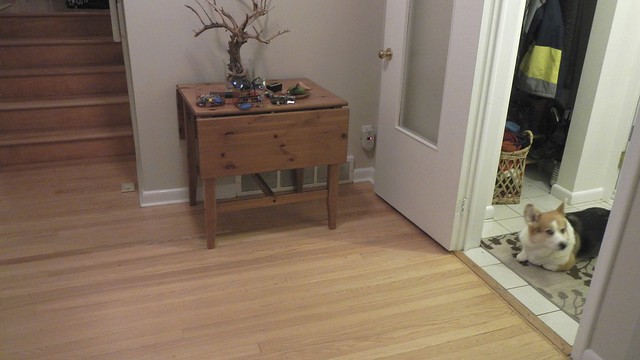 This is not the final form for this entrance way by any means: this is our old kitchen table and I don’t know what I’m going to do with any of these things. But now the space is clear and looks a little bit more like an entranceway should. It’s still a work in progress, but now that I’ve done this room I can move on to another, and then another, until finally the whole place is done. One down, several more to go … 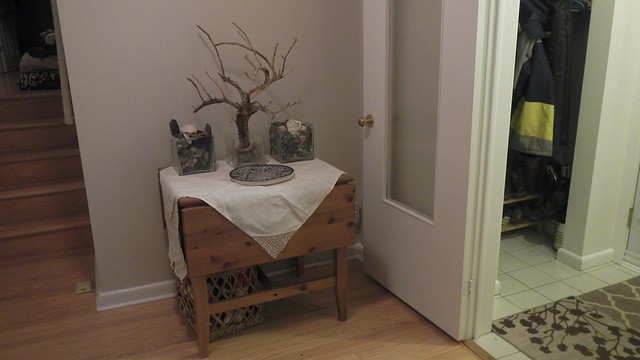 You can wash your vinyl shower curtain in the washing machine. I’m serious! They all get dingy and covered in soap scum and nobody wants to scrub something like that. Most of the time people just throw them out after about six months or a year. But now you don’t have to!

So bung it in the wash, with a little bit of bleach to combat the mildew, and wash away. You can even put it in the dryer if it’s one of the stiffer variety to ease out the wrinkles (just make sure to take it out before it’s done so that it doesn’t melt and so that the wrinkles don’t cool in that position). Mine I just hang back on the shower to dry. Because that’s what it’s supposed to do. 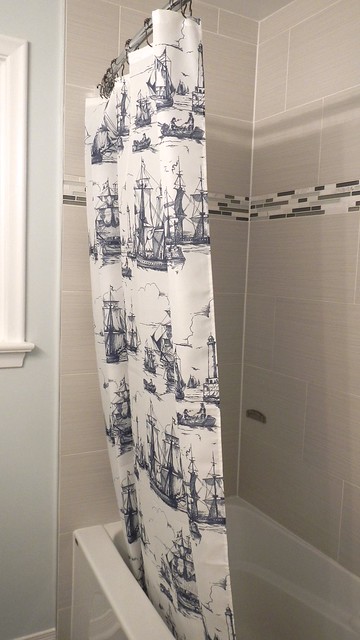 On the plus side, the bathroom has been unpacked – there is so much storage in here I don’t even know what to do with myself. The previous owners had two teenaged girls so that explains why there’s so much space to put stuff. The Pie and I use all the same toiletries between the two of us so we’ve got room to spare. 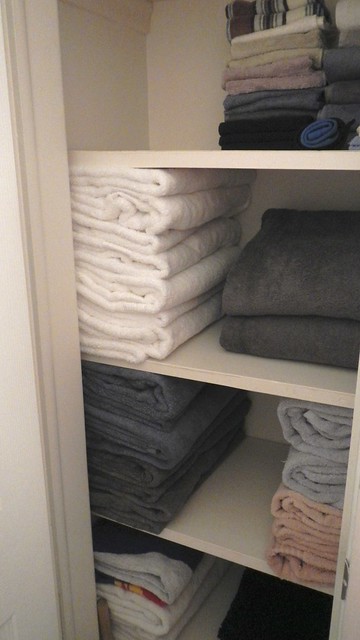 I wish I had a better post for you guys today, but we’re totally exhausted at our new place. We kind of moved all the furniture over in a rush on Saturday so we’re still trying to figure out what is going where. We know we’re missing some essential pieces now but we’re willing to live without until we figure out what we really want. 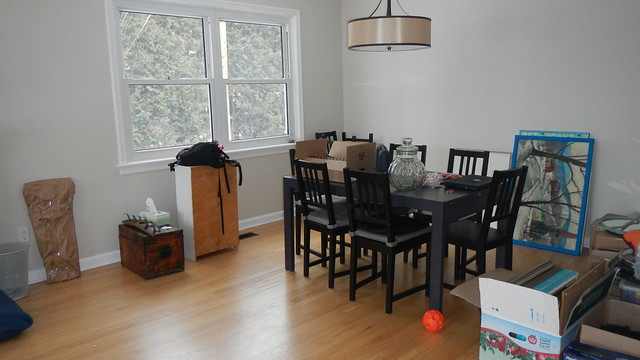 The kitchen is still a hot mess. I mostly just shoved things in random cupboards all weekend while directing people where to put things. The Pie and I figure we’ll wait a couple weeks until we’re less tired and actually give some thought as to where we want things to go. 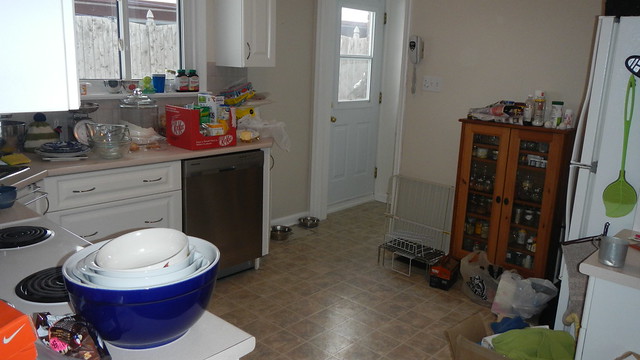 Because I was mostly directing from the kitchen, our dear moving crew, when told things were to go in the basement, basically shoved absolutely everything into my office. So it’s a little impassable at the moment, and my computer is currently set up at the dining room table. 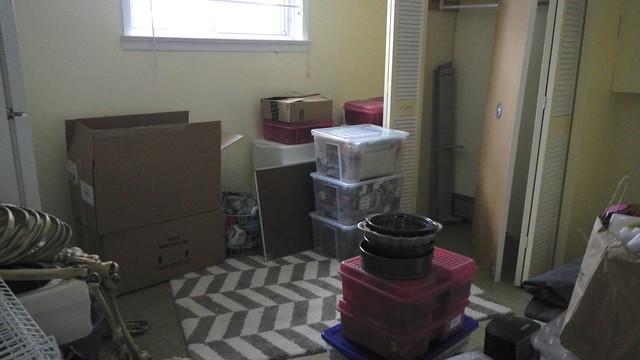 Things that we didn’t immediately have a place for are in the future baby’s room. 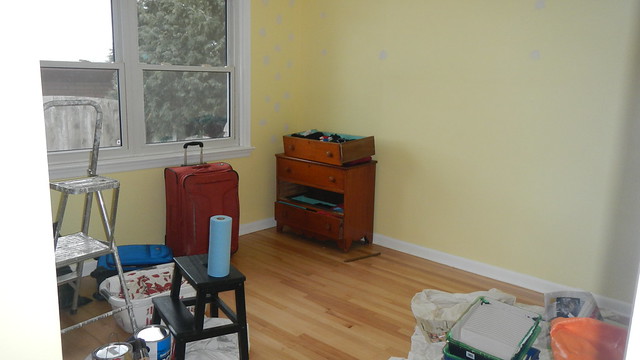 The guest room is half-assembled because I don’t want to put it together until I’ve painted it (it’s going to be green!). 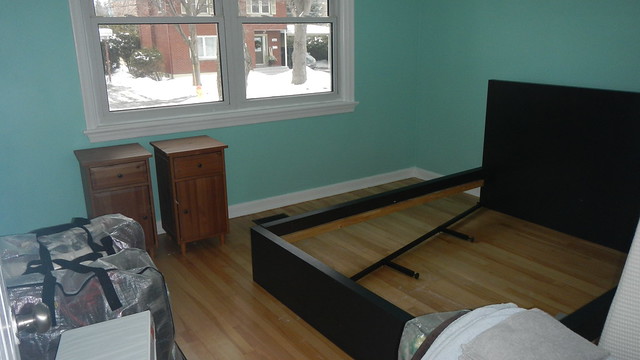 But the living room *kind* of is useful at the moment (i.e. there’s a couch, a coffee table, and the TV is hooked up to the internet). 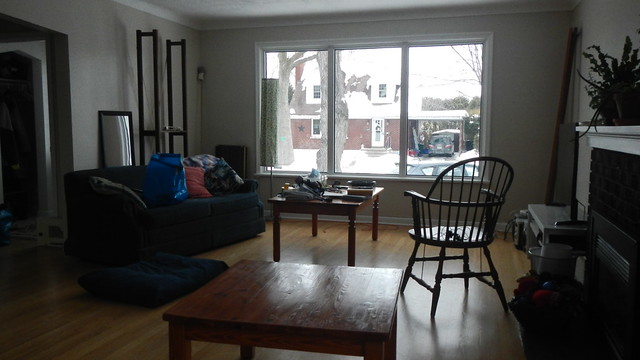 Gren is settling in fine, I think. We gave him some fancy drugs our vet gave us on moving day and those helped his anxiety a whole bunch (as did a Kong full of frozen peanut butter). He’s still prone to sulking in weird spots. 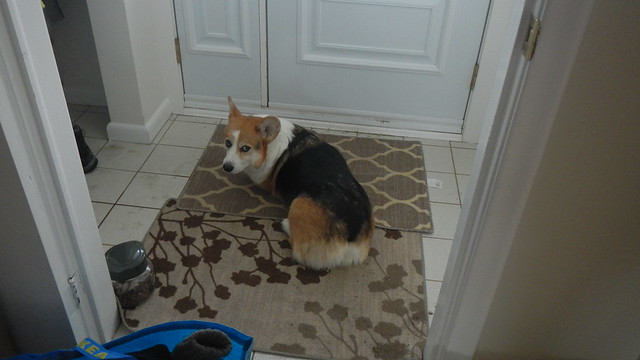 And he and I are having trouble with these super steep back stairs. We’re going to see if we can’t lessen the slope by adding an extra one at the bottom at some point soon. 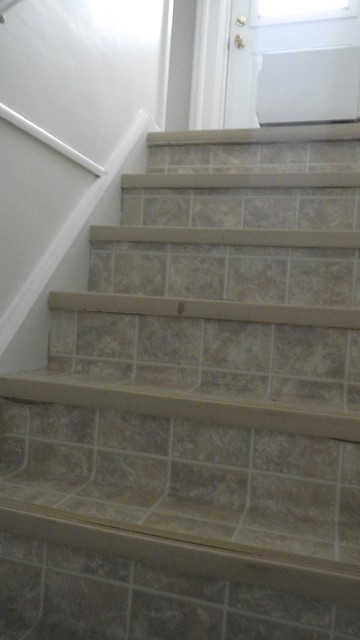 But the Pie has started to figure out where things are going to go in the room the previous owners called “The Cave” (it was on an envelope filled with paint chips). 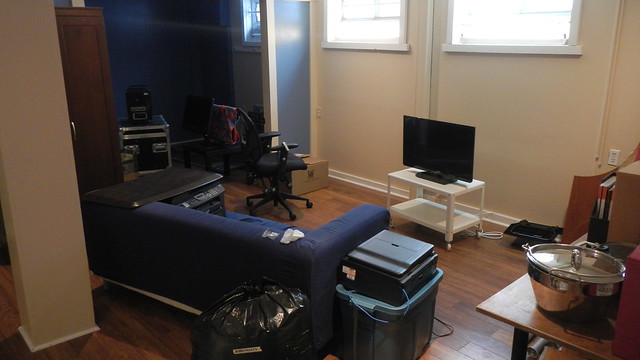 And I can already see myself sitting in my favourite chair with my feet up in front of this fireplace. I’m looking forward to it! 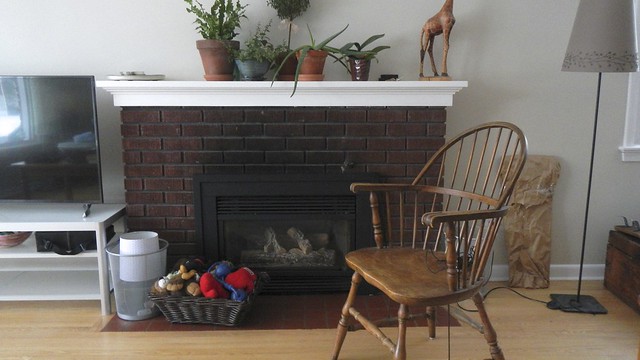 Happy New Year! One of my resolutions now that I’m super poor due to owning a house is to get the last drop out of everything I own. Tremendous thanks to my bestie Chelle for filling in this Friday with a guest post. If makeup and fitness are your thing, make sure to check her out!

Hi everyone! My name is Chelle and I run the beauty blog Makeup Your Mind. I’m helping out Ali today by passing along one of my fast tips (I actually got it from my mom, but we’ll ignore that for the sake of this post…).

So you’ve almost finished your favourite lotion. Unfortunately, it won’t squeeze out of the tube any longer but you can see that there’s still plenty left inside. Sure, you could bang the bottle against your hand and splash it everywhere, but do you really want to do that?

Instead, take a pair of scissors and cut right through the tube.

You’re left with two separate pieces and easy access to your product inside.

Now, my bottle was semi-transparent so I could see how much was left inside, but I think you’d be surprised how much lotion is left inside opaques tubes that we believe are totally empty. I’ve got at least several more days’ worth out of this one!

To close up the bottle after you’ve scooped out what you need, insert the bottom half of the tube onto the new “lid” and tada! You’ve got easy access to the remainder of your product AND you get to keep it fresh!

It’s finally happened. The Pie and I have joined the proud ranks of first-time homeowners. And we couldn’t be happier. 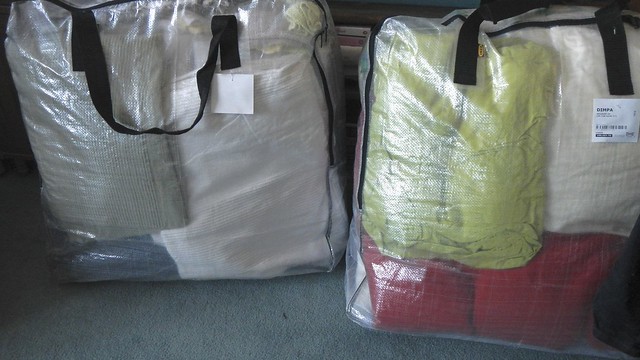 We close on the 14th of January, so we’re on a tight timeline to pack up the Tower and get ourselves over to the new place. So in the meantime, please excuse the mess you see in the background at Ali Does It, and possibly more cheater posts than normal in the next few weeks. I promise you that we will be back to regularly scheduled programming – and more! – by the end of January. We bought a house that is almost 60 years old and came with a good many of its own quirks – which we will, in true Ali Does It style, make our own.  And we will make sure to fill you in on all the craziness while we’re at it. Crazy corgi included, of course. 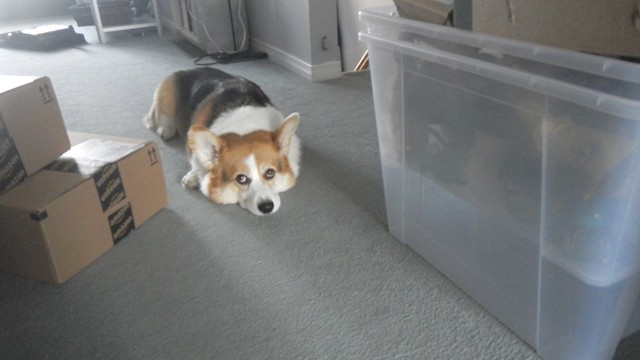 Plus the house has way more space for making stuff and doing things (it. has. a. WORKSHOP. and. COLD STORAGE. I am so excited), a bigger, brighter kitchen, more light in general, and NO MORE BLUE CARPET. So things are only going to get better from here on out, on the blog and otherwise. Stay tuned! 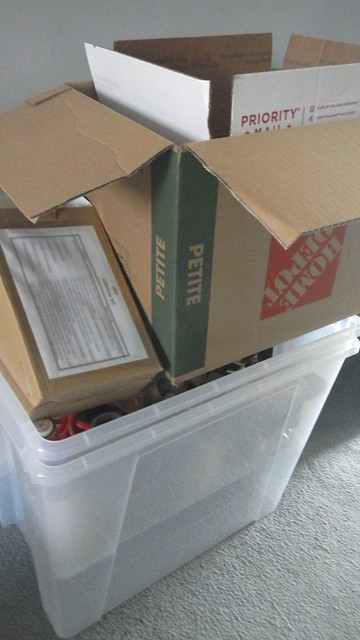