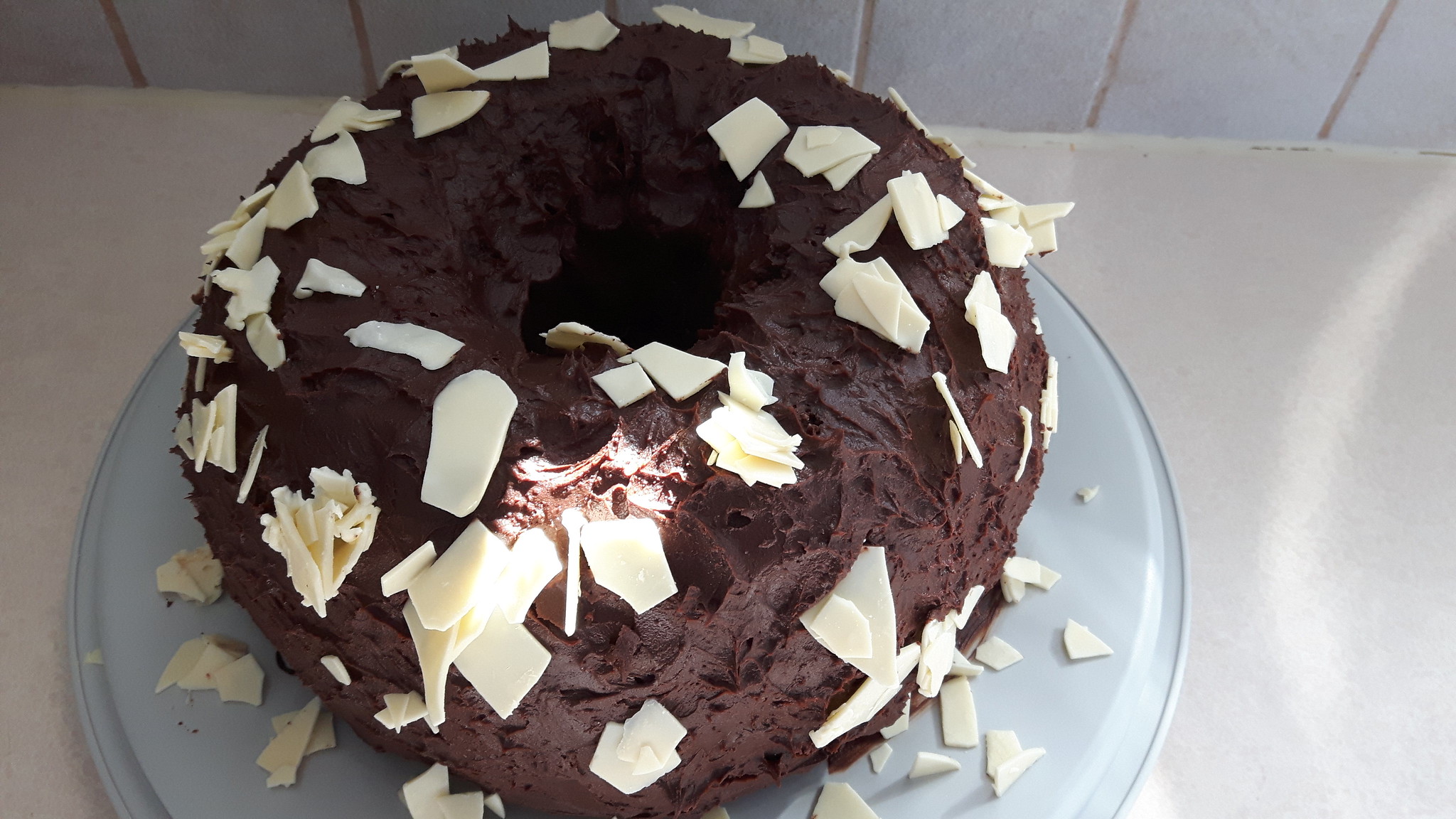 As a follow-up to the angel food cake we made in the last post, I made this devil’s food cake the same day to use up the 12 yolks I had on hand. The only problem was that there wasn’t actually a recipe out there that used 12 yolks in a chocolate cake. We had long since grown out of doing that, using whole eggs instead. All the 12-yolk recipes on the internet were for yellow cakes, not chocolate. So I had to make it up. And here it is. I’m quite pleased with the results. 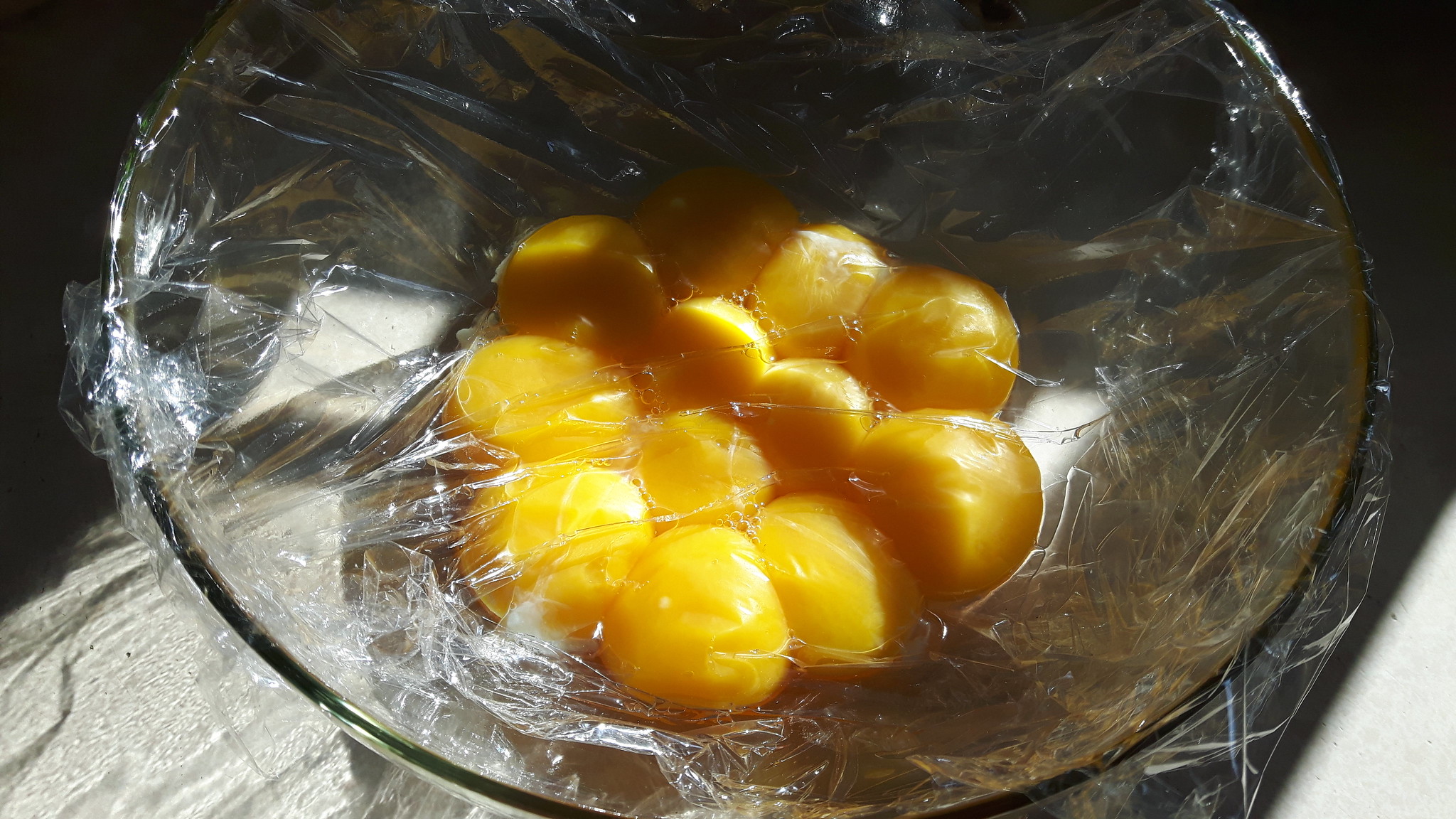 Start by preheating your oven to 350°F and grab yourself a bundt pan. You can do this in any pan you like, or make it into a layer cake, but because I was serving this alongside the gluten-free angel-food cake, I wanted them both to be round with holes in the middle. Butter or spray your pan and then flour it to be on the safe side.

If you can bear to part with it (and as a parent of a nearly one-year-old, that’s a big sacrifice), save 1 3/4 cup coffee from your morning brew and allow it to cool. To up the coffee insanity (unless you made espresso earlier), tip in 2 tablespoons instant coffee or espresso powder and stir to combine. 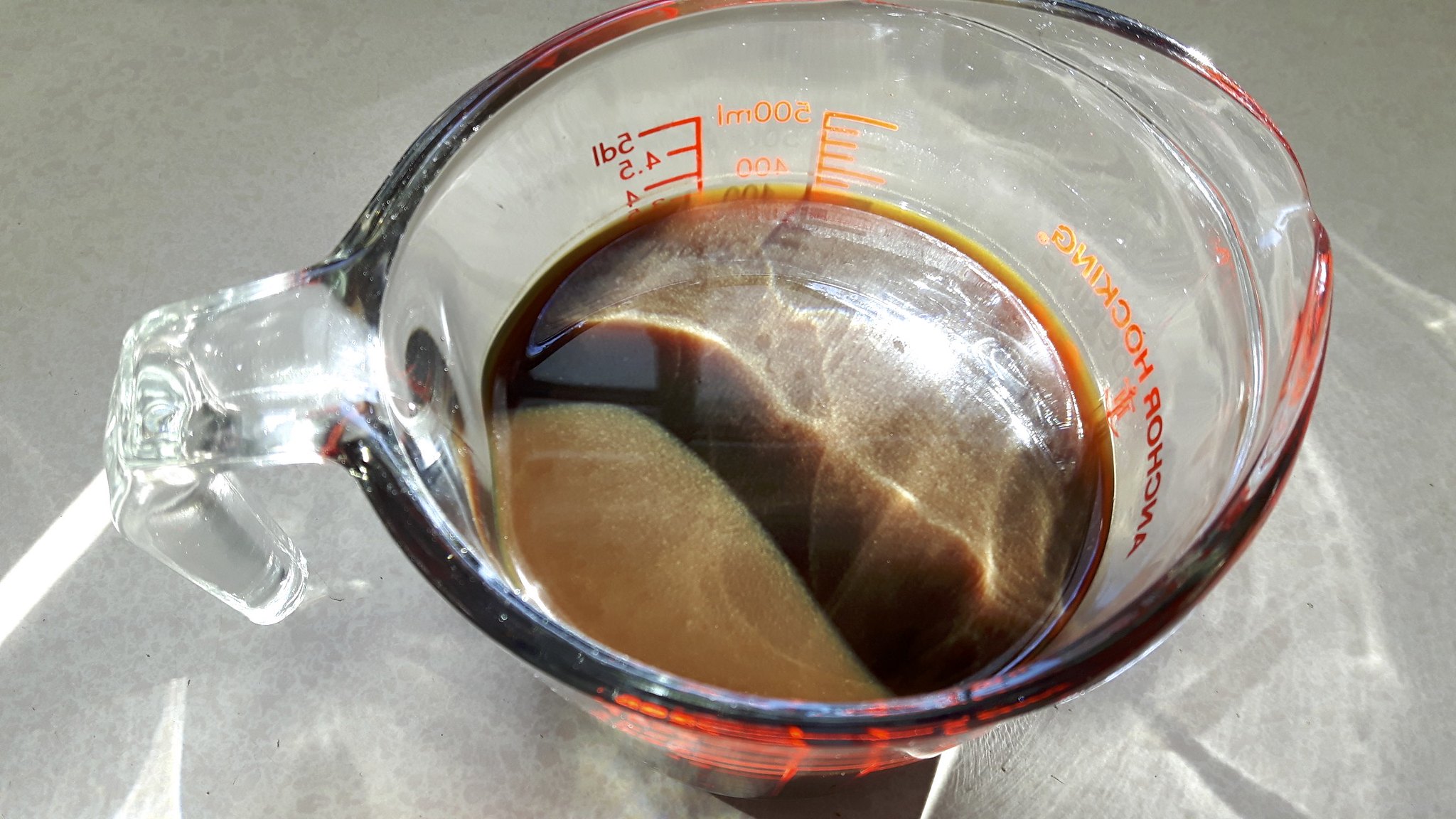 Chop up about 1 cup chocolate into wee pieces and toss it in the top of a double boiler or heatproof bowl over a pot of simmering water and let that sucker melt. Let it cool a little bit so it’s not molten lava. 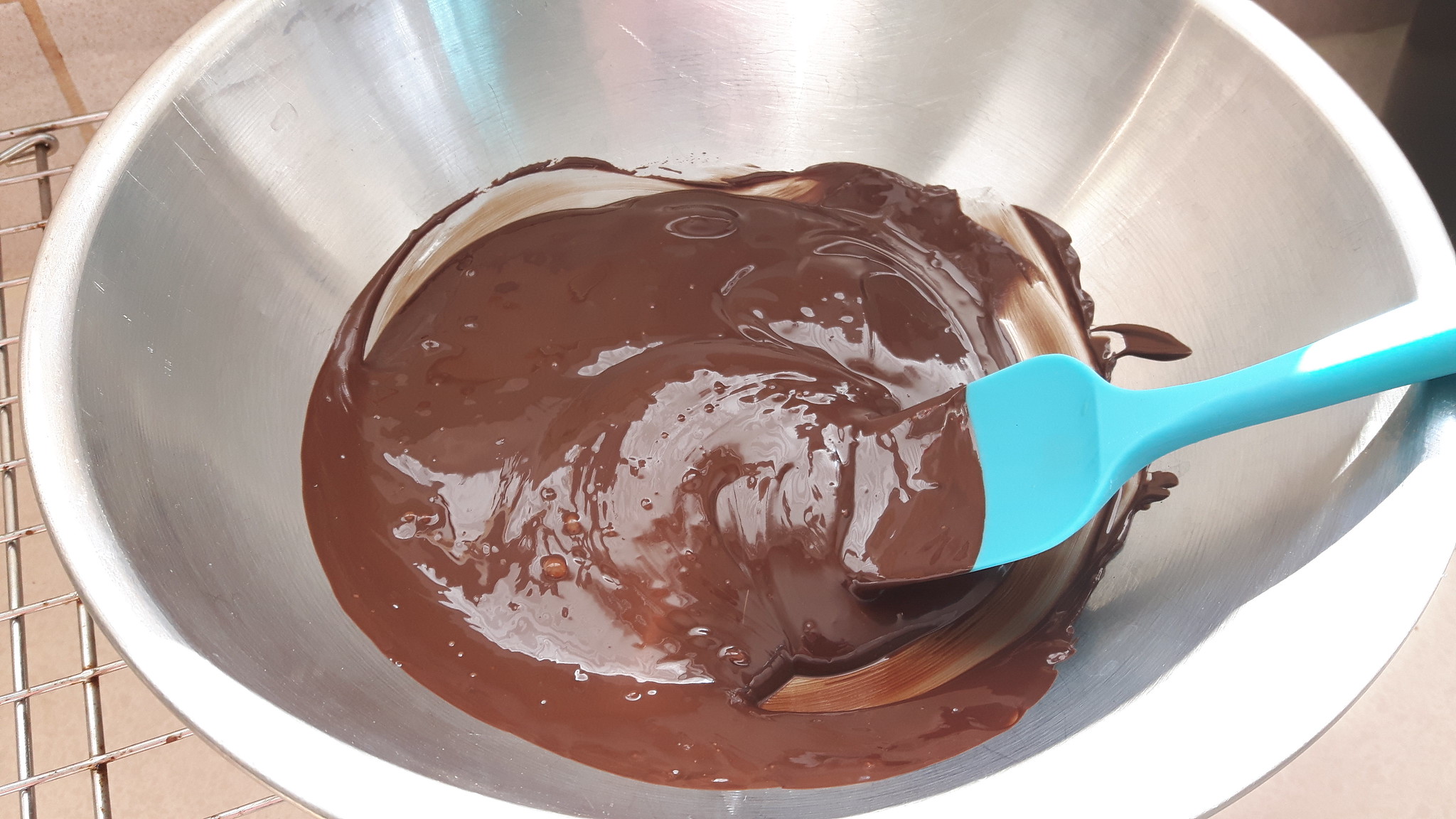 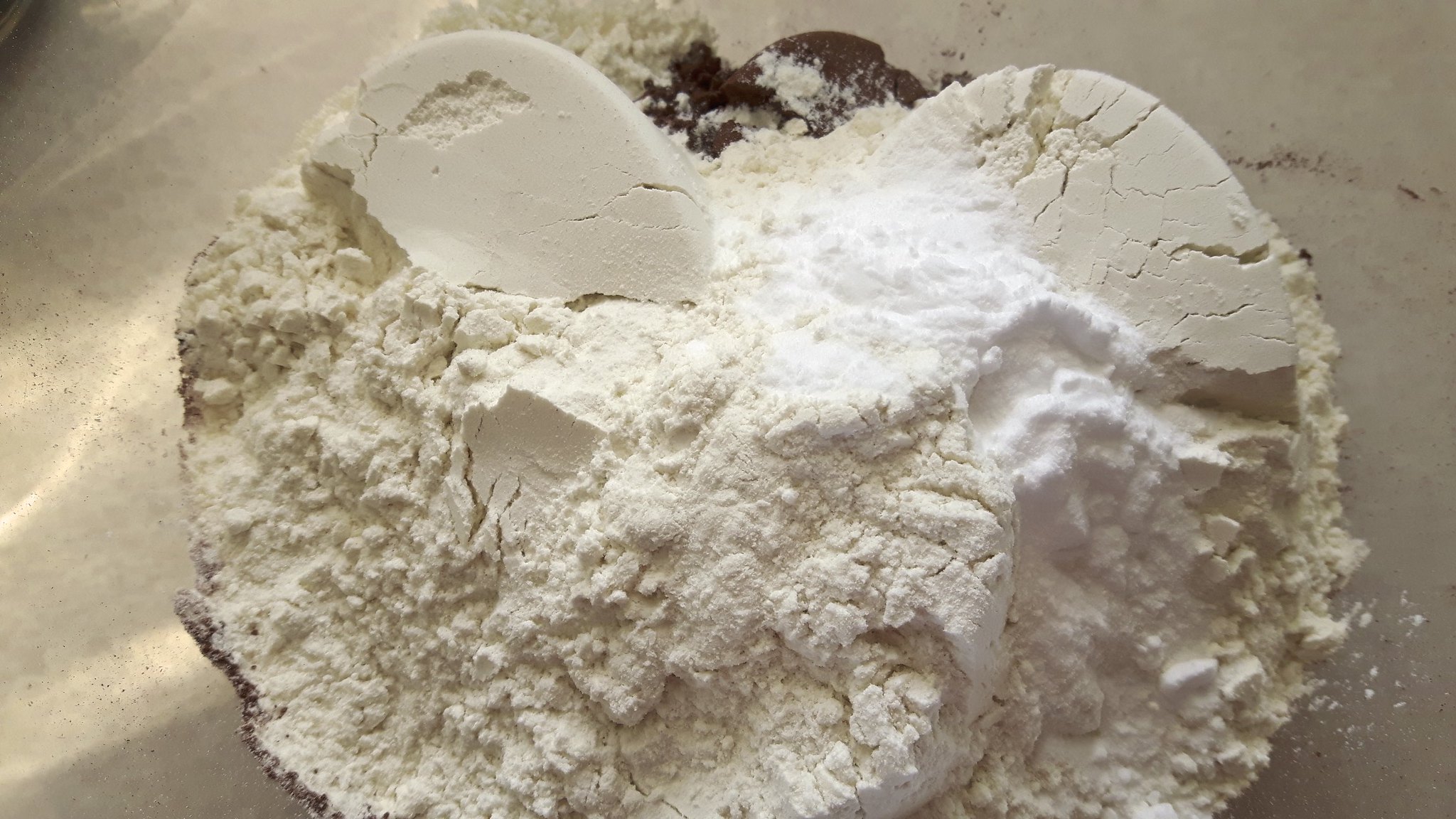 In the bowl of your mixer, cube up 1 cup butter (softened) and beat the crap out of it together with 1 1/2 cups sugar until it’s soft and fluffy. 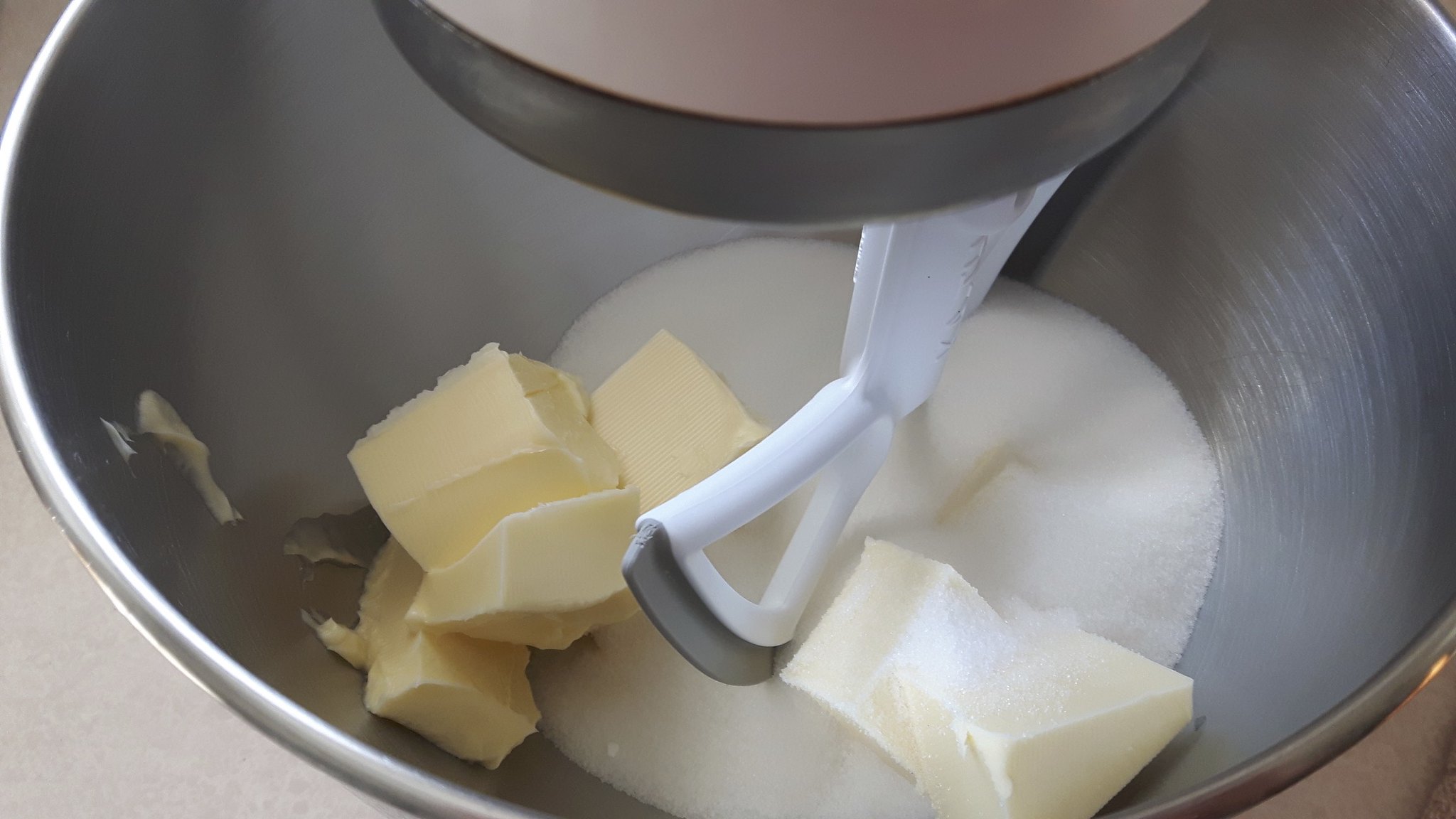 Then grab your 12 egg yolks and slide them into the mixer one at a time until they’re fully combined. Scrape down the sides of the bowl occasionally. Add in 2 teaspoons vanilla as well. 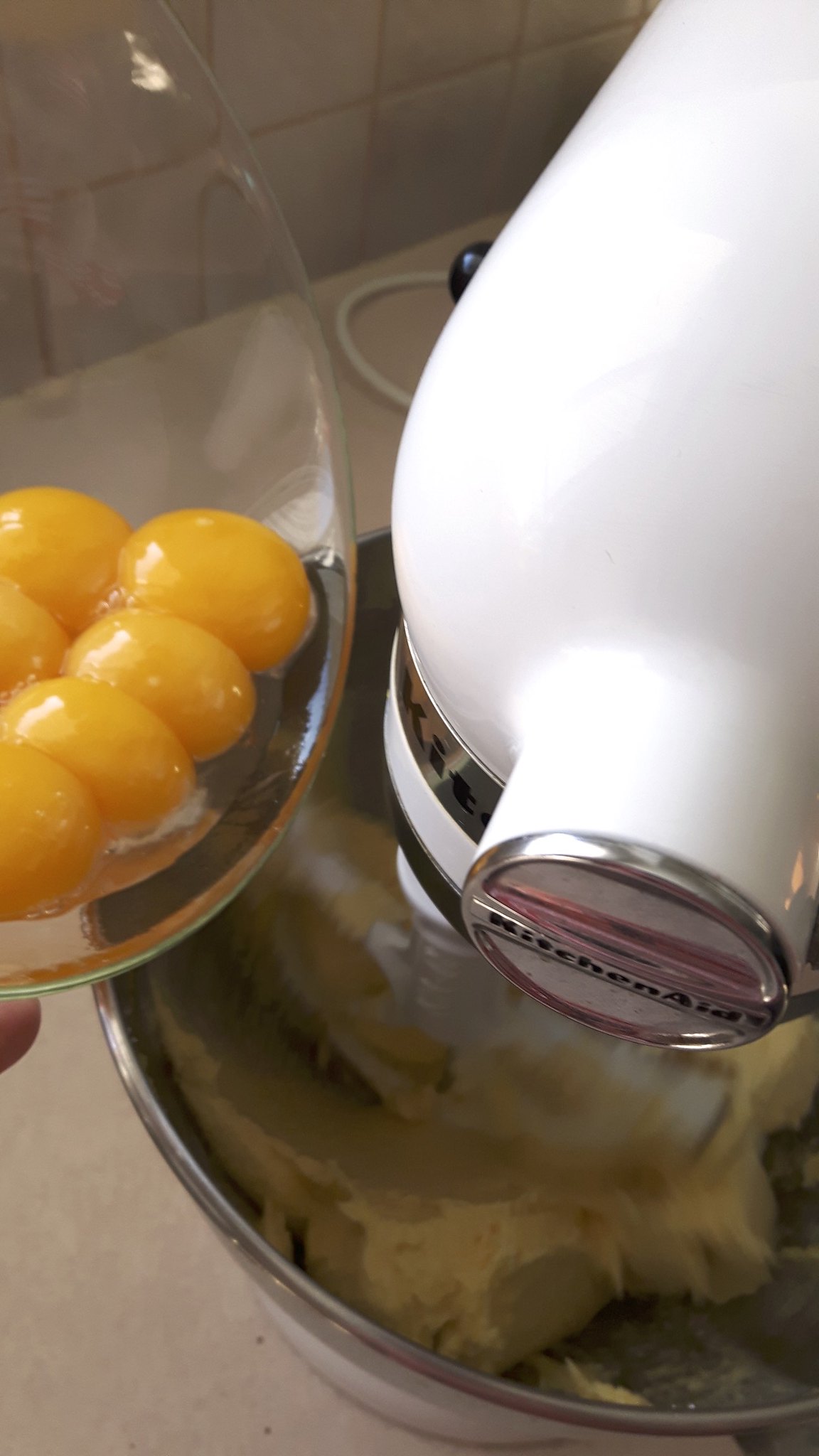 Look at that yellow loveliness. 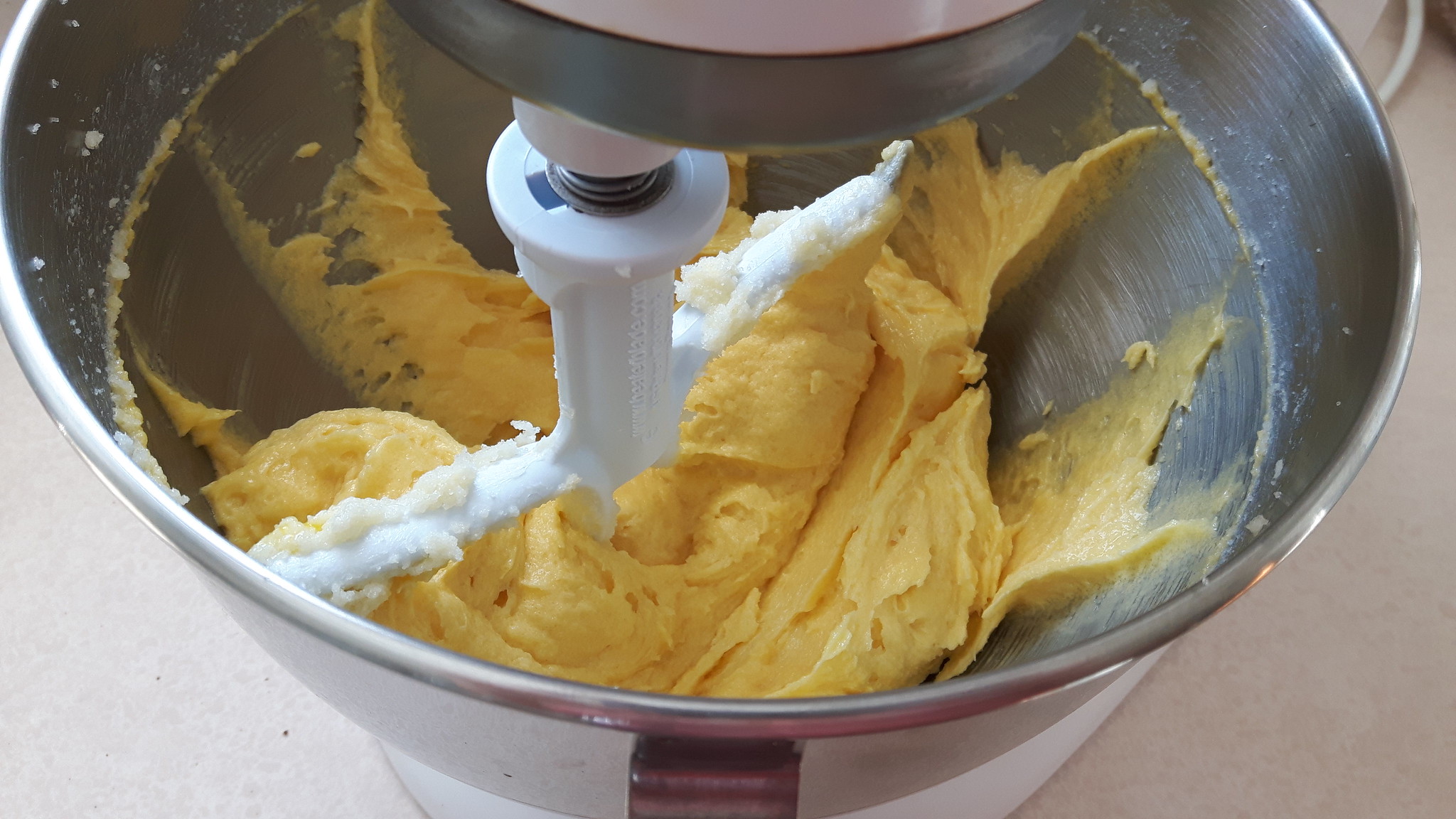 Now beat in your melted chocolate until your batter resembles a tar pit. 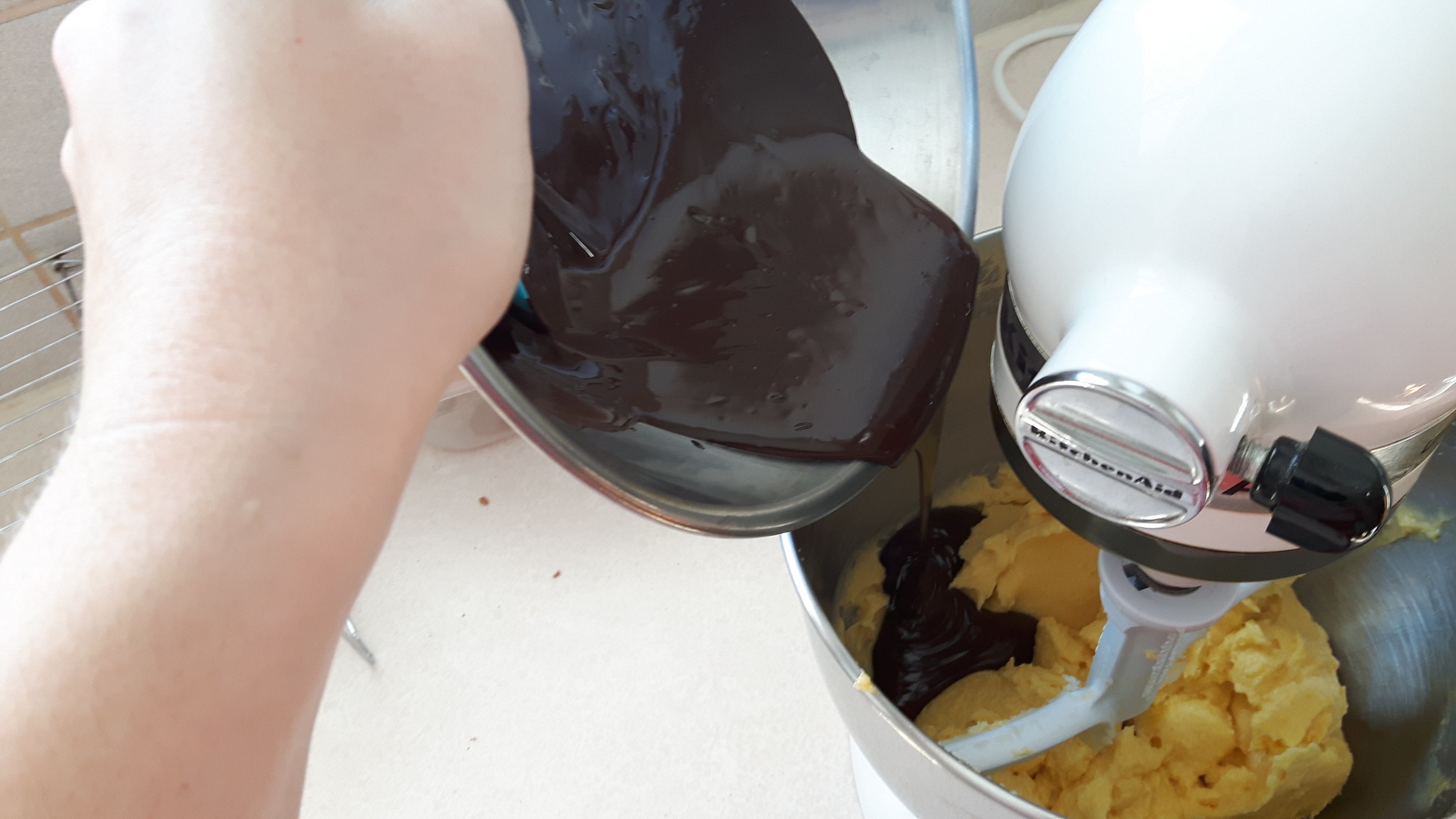 Then grab your flour/cocoa mixture and your coffee. 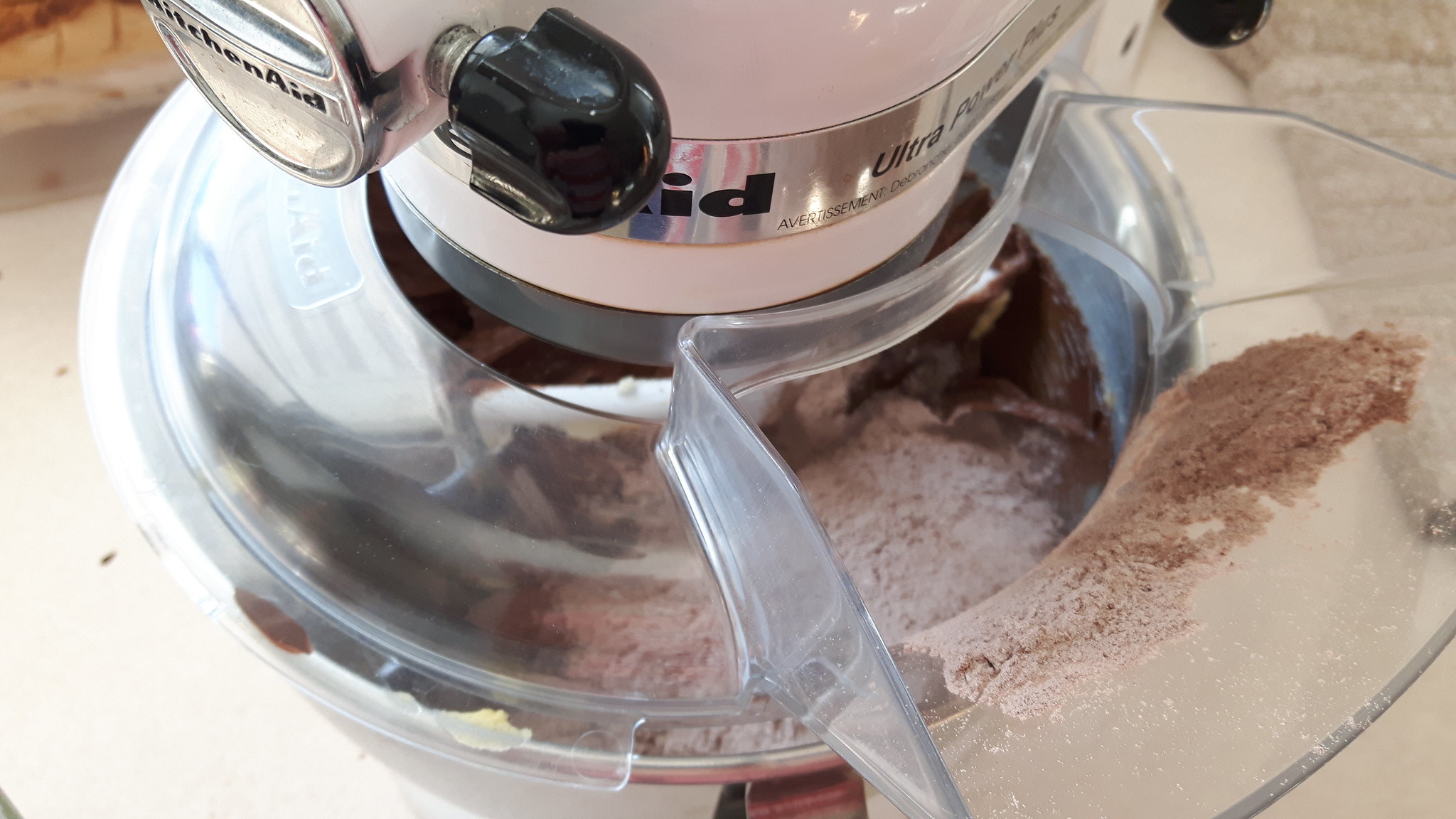 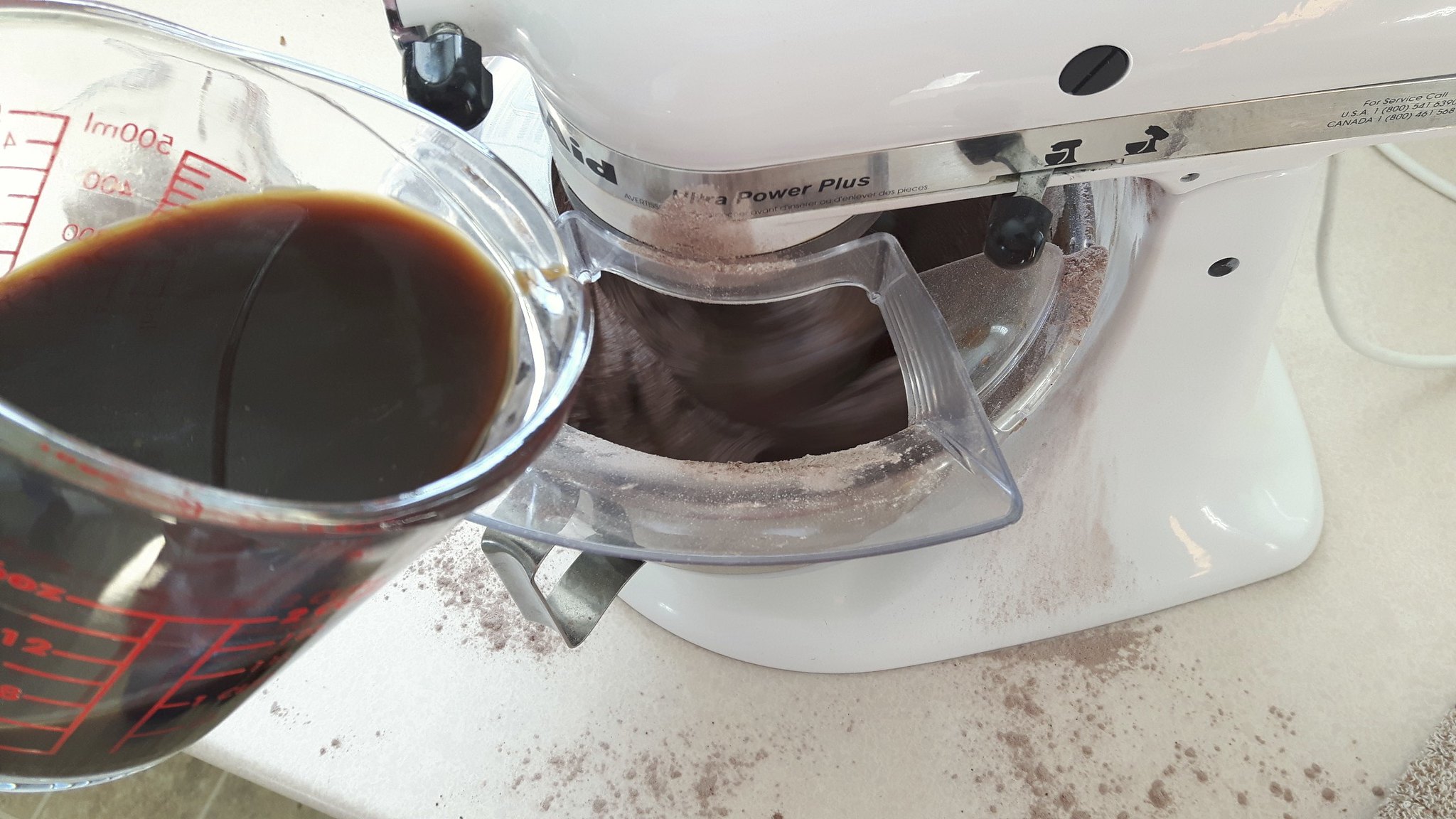 Even with a spatter shield in place I still had a bit of a mess. 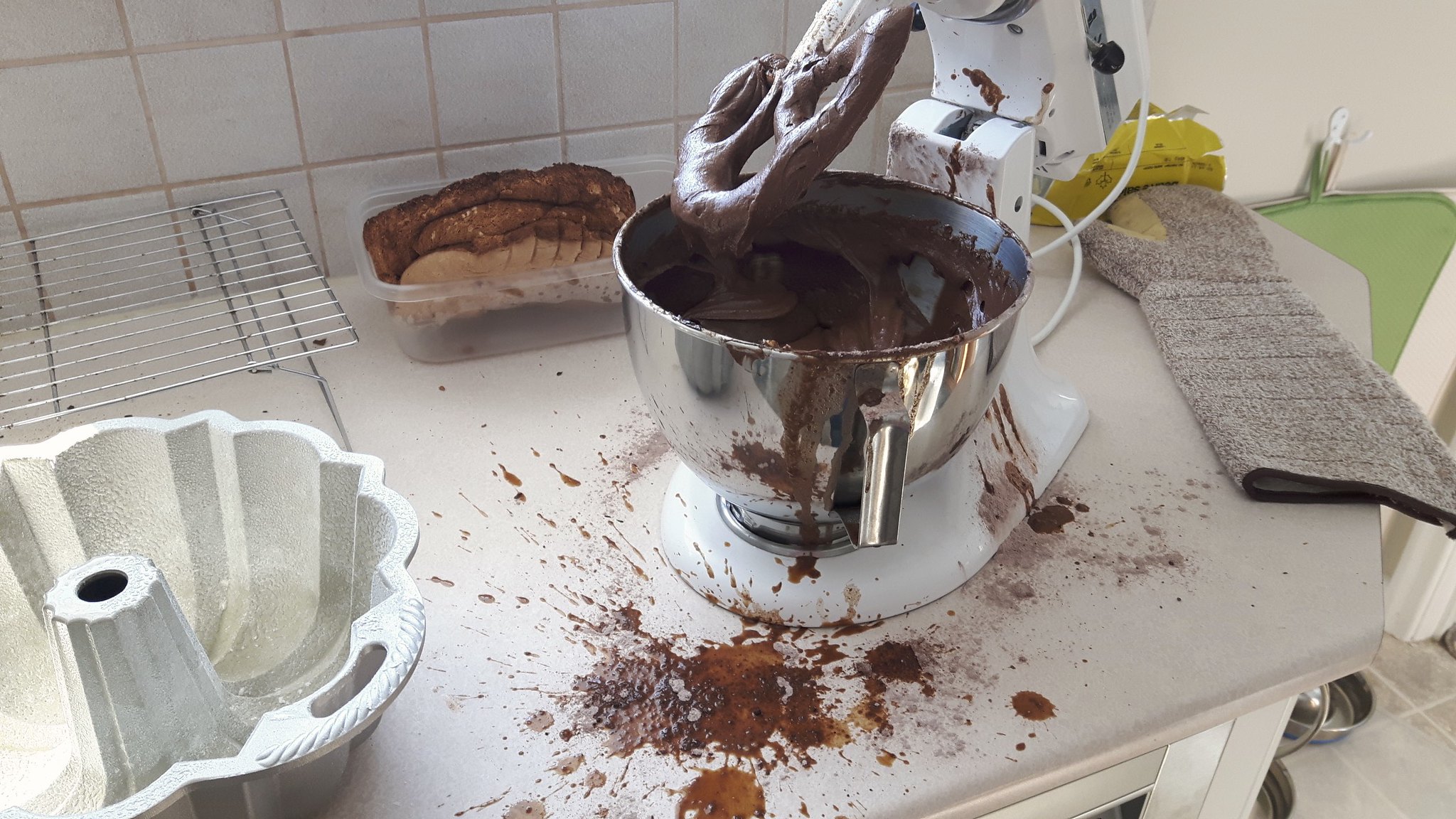 Smooth the batter into the prepared pan and bake for about 35 minutes, until a toothpick inserted in the centre comes out clean. 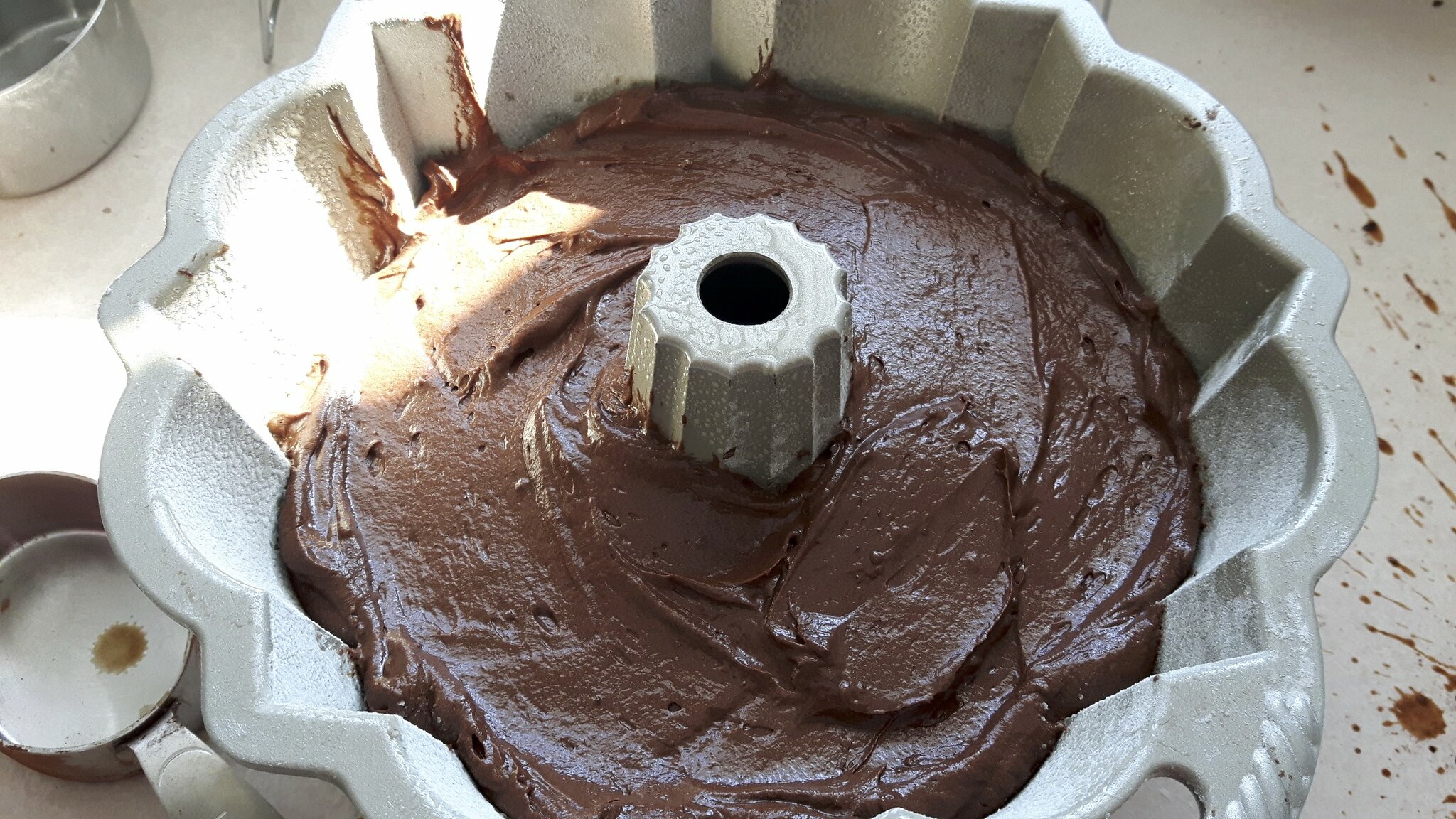 To be perfectly honest, I’m not sure if it’s 35 minutes or not. I didn’t write down that part of my recipe and after having dropped one angel food cake and had to make up another it kind of slipped my mind. But I’m guessing 35 minutes. If it’s not, then it’s a little longer, maybe 45 minutes. But certainly not less than 35 minutes. So keep an eye on it. And tell me what you come up with. 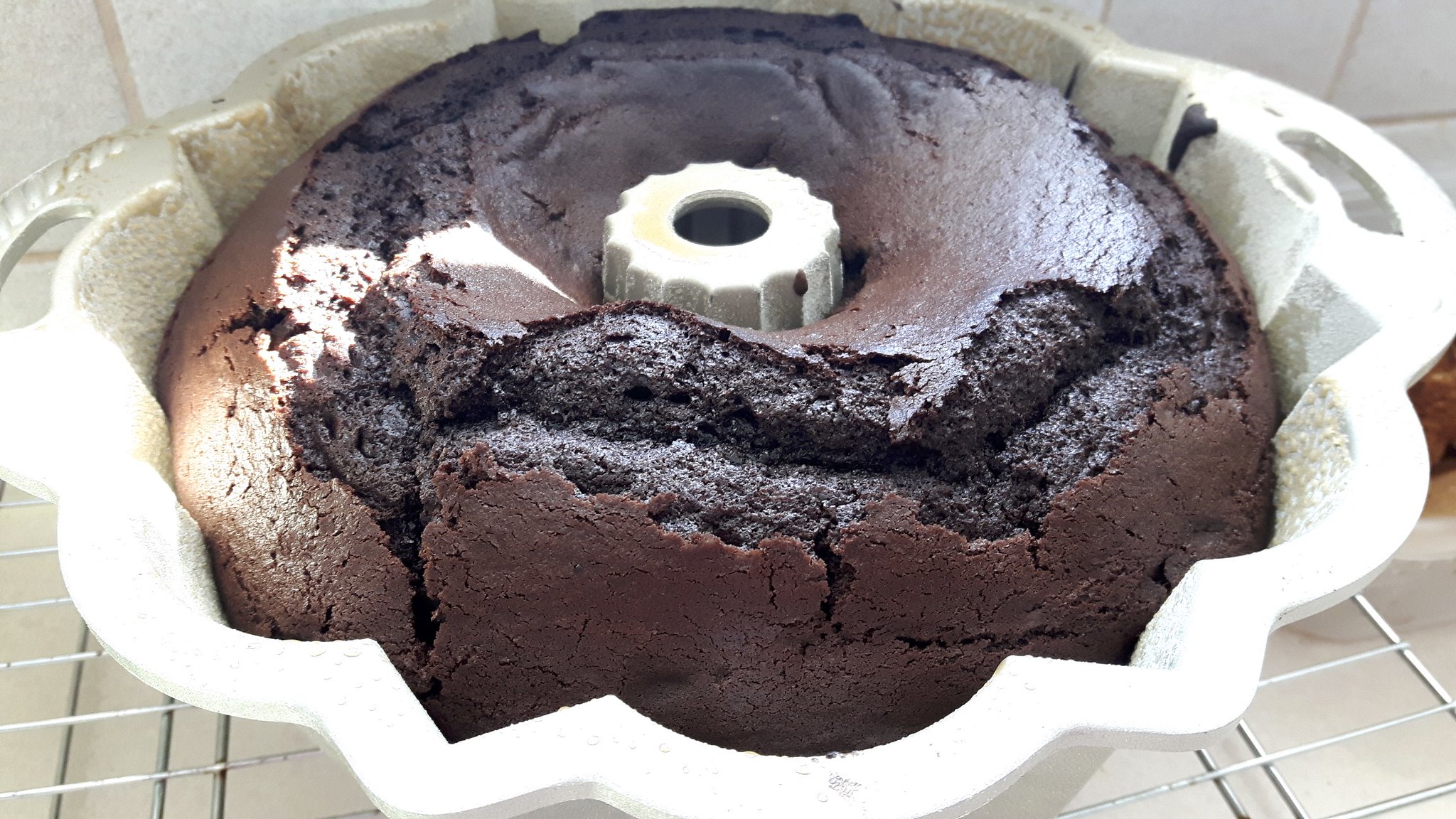 When the cake has somewhat cooled you can tip it out onto a rack to cool completely. You can see the light coloured stuff on the surface: that’s the flour/butter from the pan. If you don’t want that to show up – like if you’re not planning to ice the cake – then don’t flour it (maybe use cocoa?). 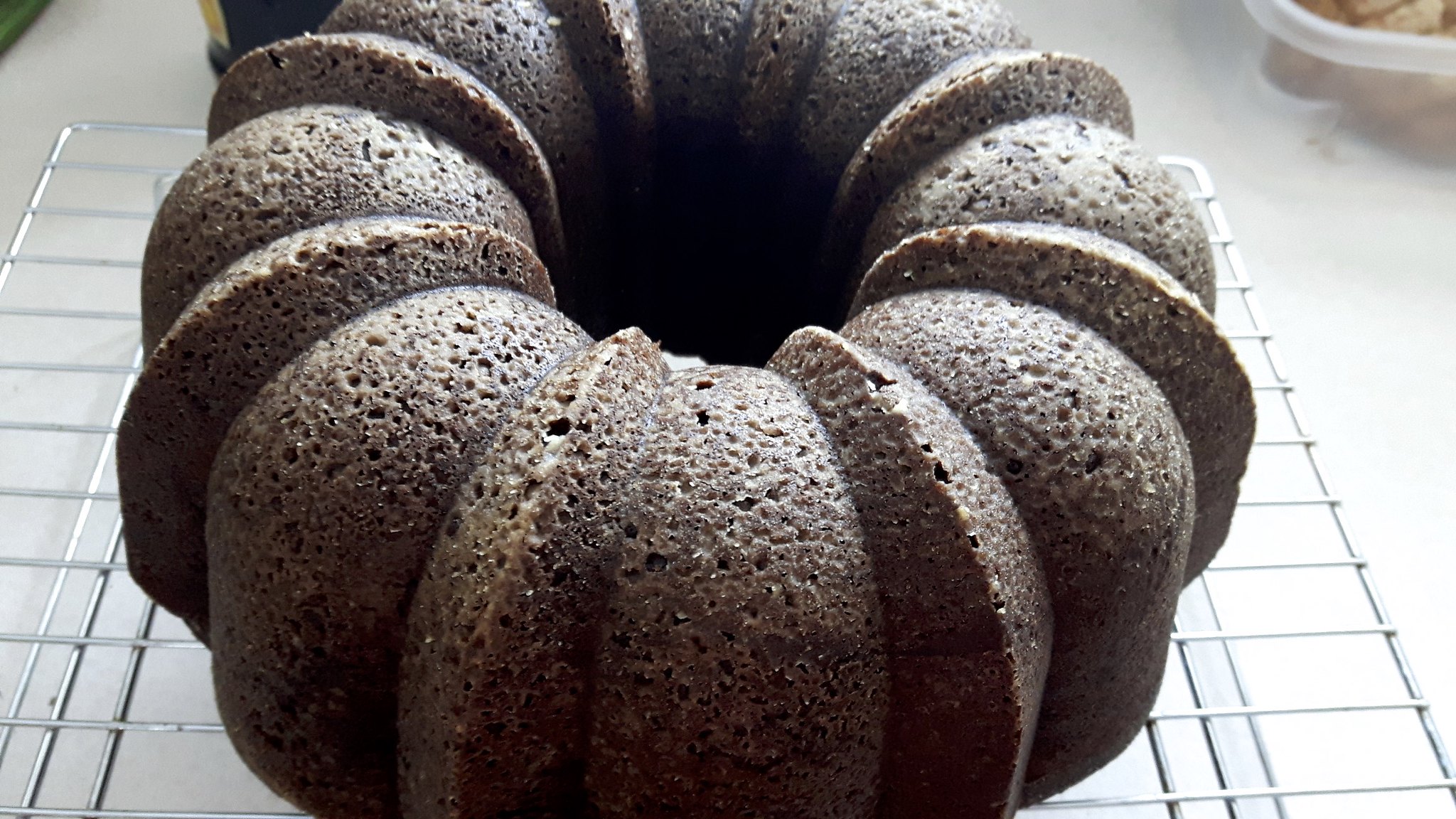 While the cake is cooling, you can make up a ganache. Chop up another 8 oz chocolate and set it in a heatproof bowl. In a small saucepan, heat 1 cup whipping cream until it’s just simmering, then pour it over the chocolate and stir it occasionally until all the chocolate is melted and the mixture is uniform. 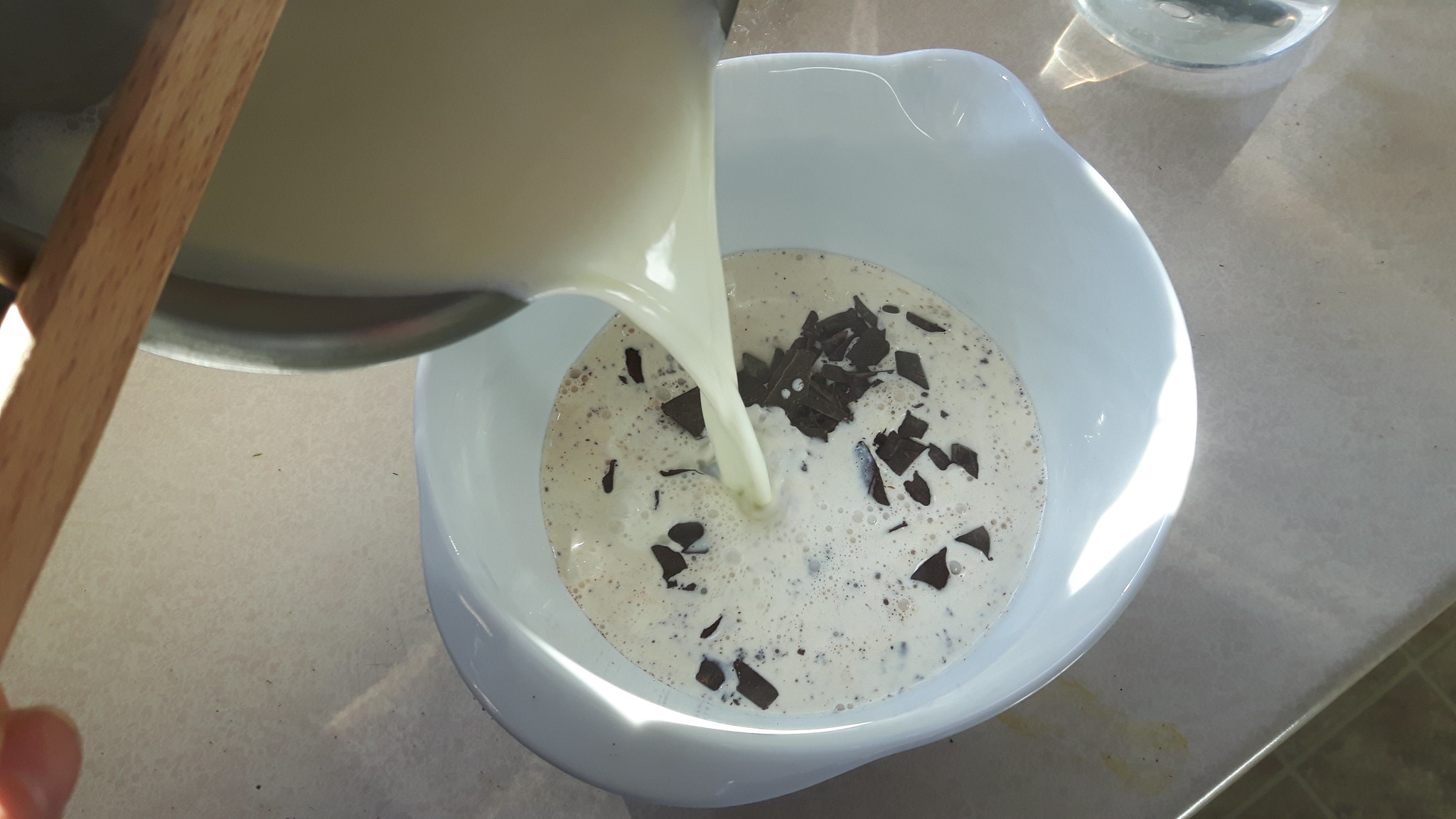 Let that cool until it reaches a spreadable consistency. 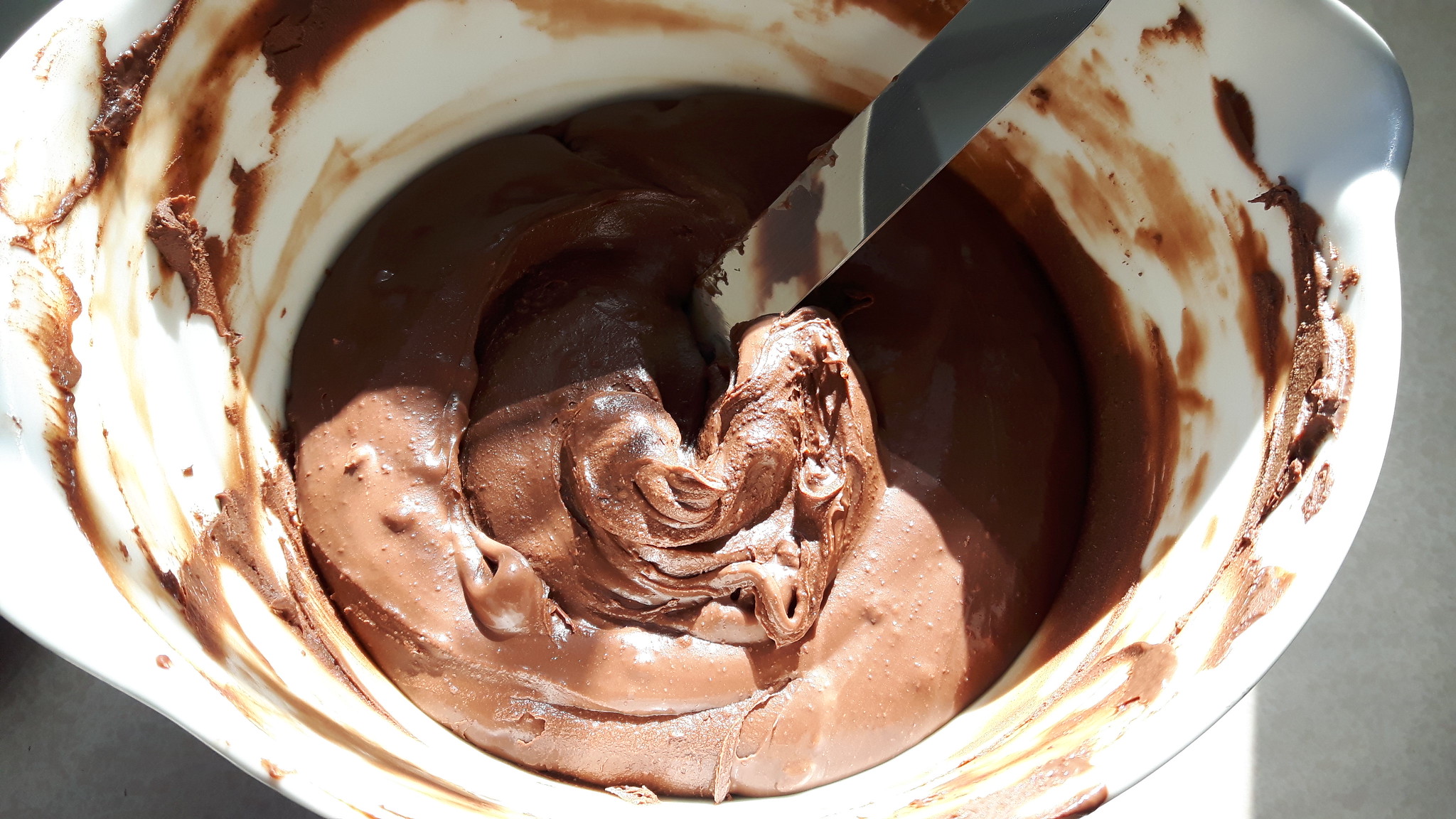 Then jam it all over your cake. 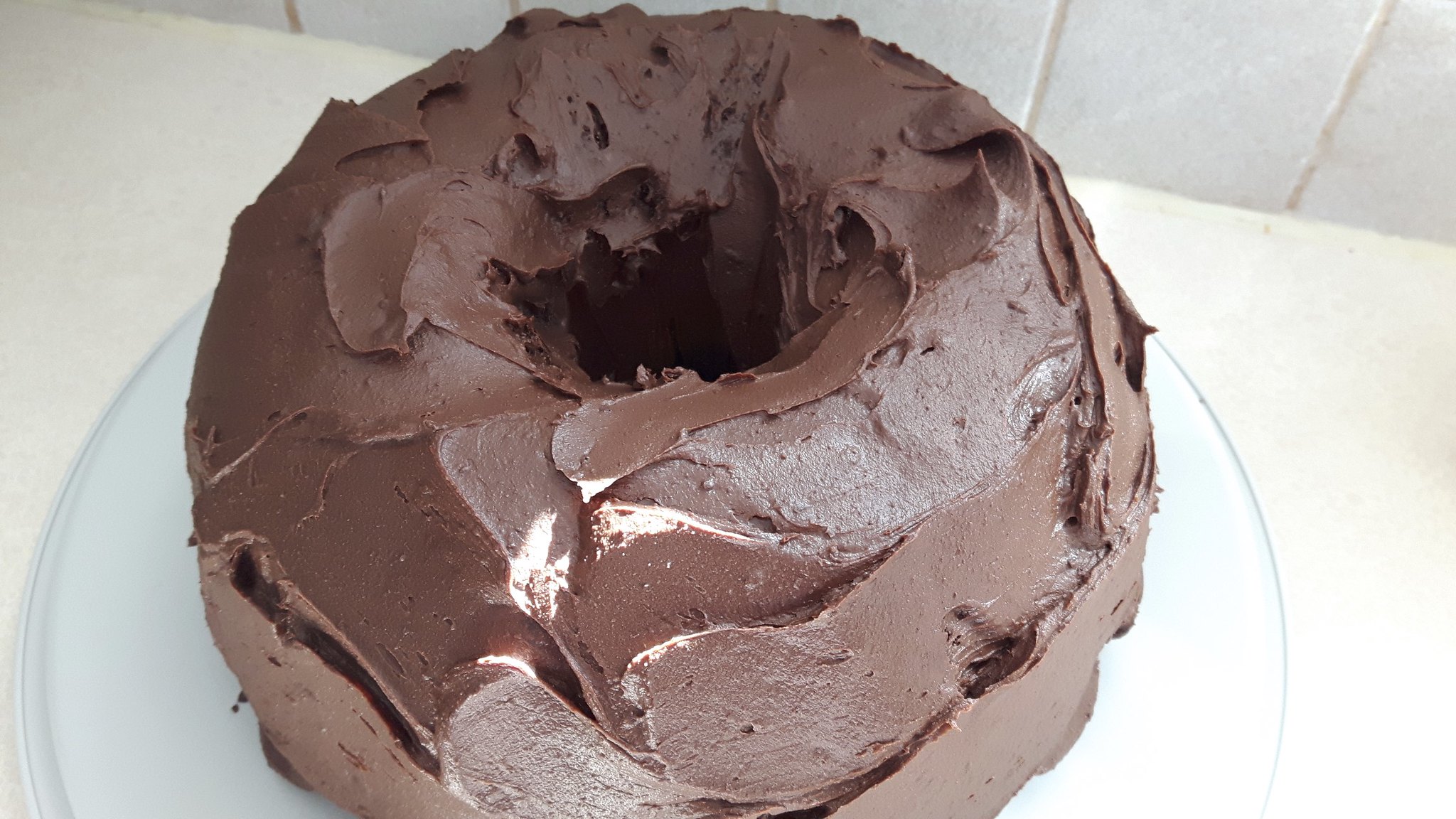 I decided seeing as I suck as icing things in an artistic fashion to kind of make it look like stucco by smacking my icing spatula against it and pulling it away. 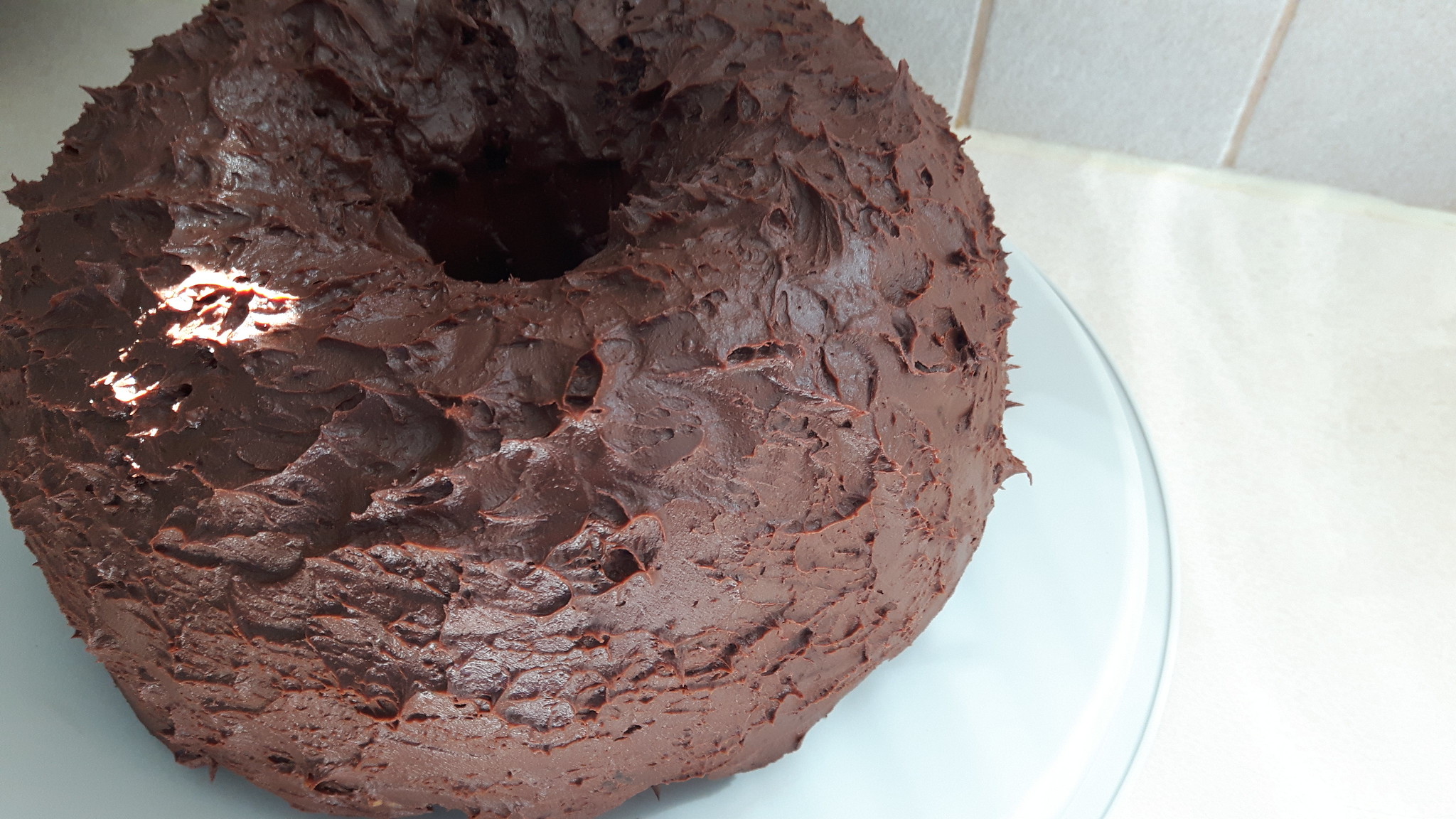 Then I added some chips of white chocolate that I had on hand for contrast. I could have applied them better but again, not so good with the artistic part of cake-making. I’m more into the cake-eating. 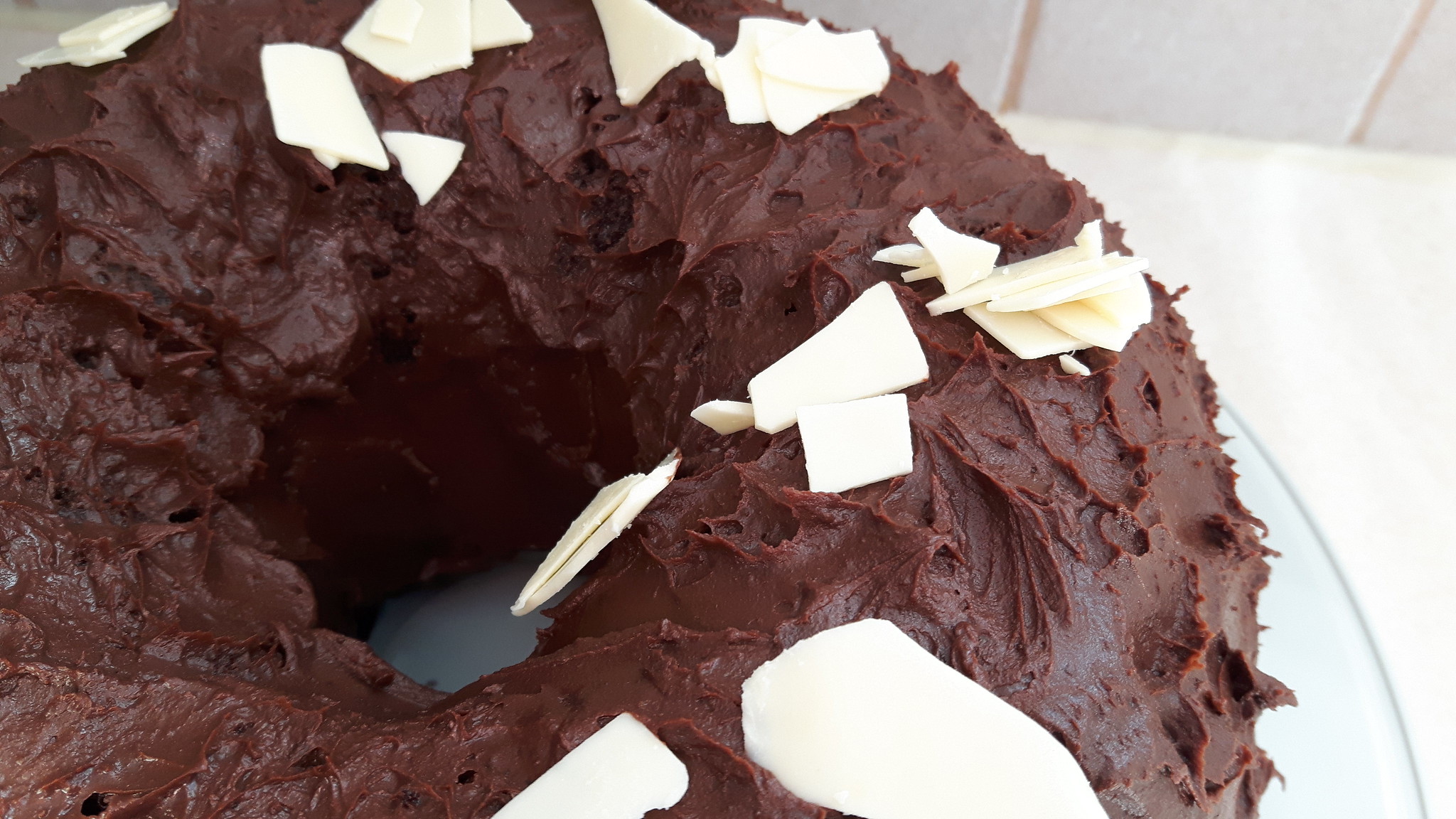 Which is what you can do now! 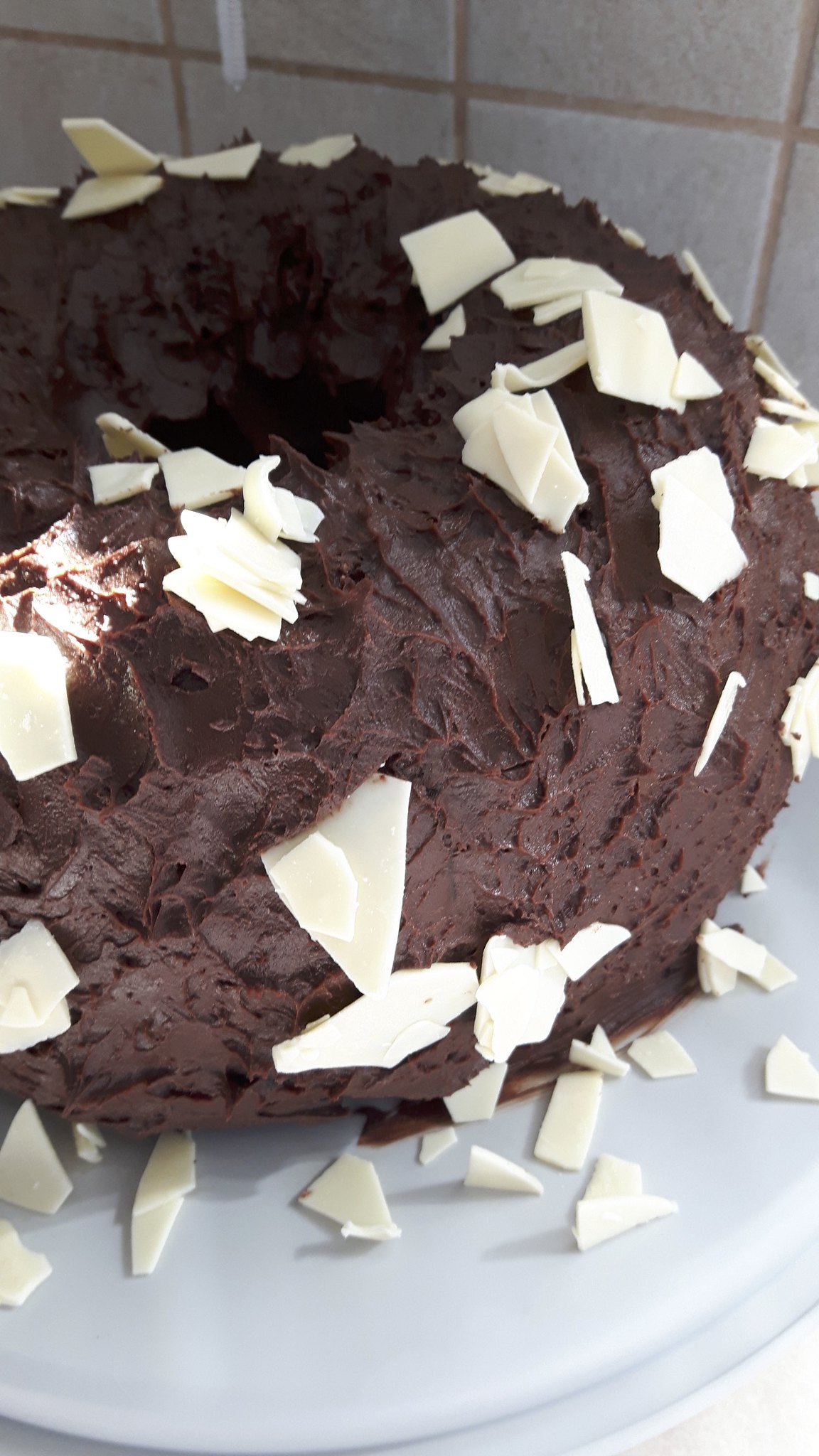