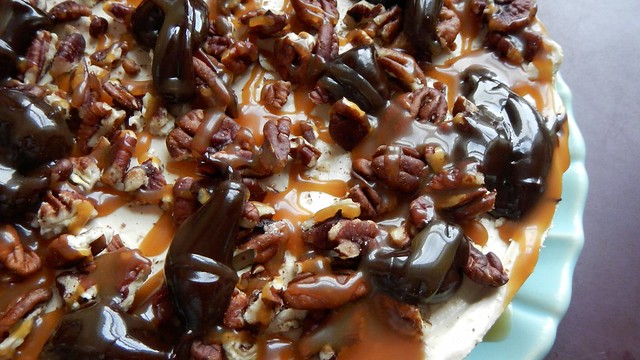 While I was waiting for the kid to show up I was getting pretty bored and pretty desperate, but I didn’t have a lot of energy. One of my former colleagues recommended cheesecake as a way to start labour and I figured, why not? I had nothing to do, and an easy cheesecake recipe would be doable given my lack of energy. This one from Sprinkle Some Sugar seemed to fit the bill. It involves using store-bought brownie mix, fudge sauce, AND COOL WHIP, so it’s the ultimate in cheater recipes for me. And given that the day I baked it the temperatures skyrocketed again for a roller coaster June, I was happy to be able to chuck this in the fridge instead of hanging over a hot oven.

The original recipe is a bit of a misnomer, as it states that there is no baking involved whatsoever with this recipe. That is a bold-faced lie – you gotta bake the brownie bottom. But it’s worth it. 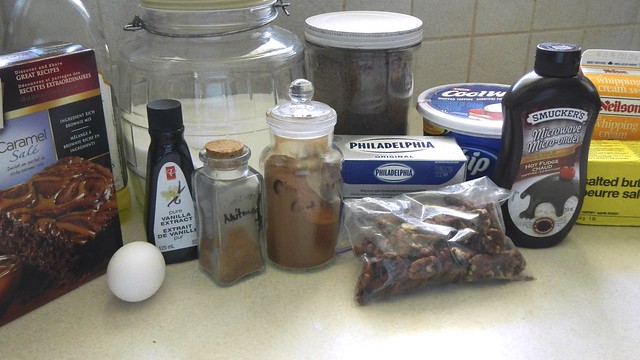 Find a round springform pan, about 8″ or 9″ (this one is 9″ I think), spray it with cooking spray, and whip up some brownie batter. You can use your favourite recipe but I used this boxed stuff (hey man, I was really pregnant at the time, gimme a break). 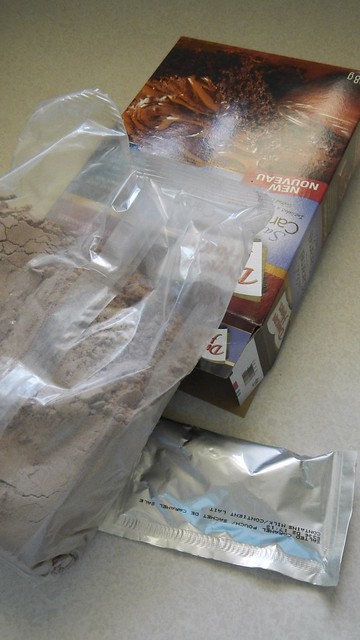 I figured the salted caramel would add more panache to the finished product. 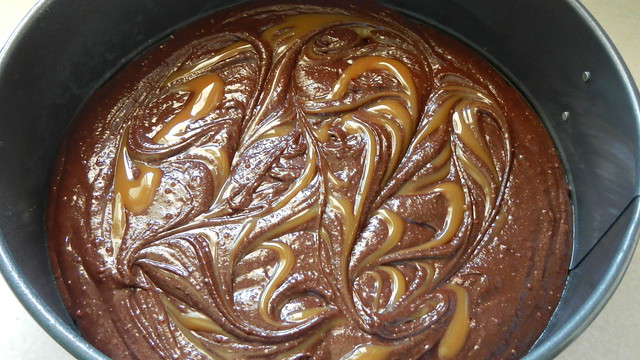 Plus I love the ridiculous measurements of the wet ingredients. So simplistic! 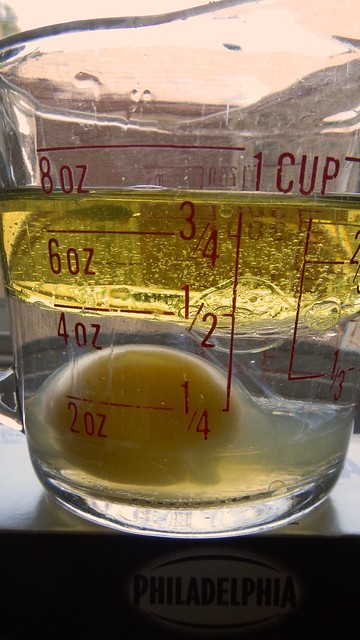 While this is baking, work on your caramel sauce (you can buy caramel sauce, of course, but this one is easy and a good way for caramel newbs to get started). 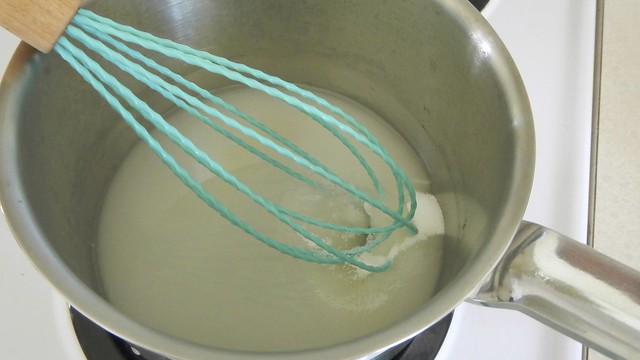 In a small pot over medium-high heat, whisk together 1 cup granulated sugar and 1/4 cup water. Whisk and swirl the pot until the sugar is all dissolved, then keep swirling the pot (but no stirring or whisking!) frequently until the liquid turns a nice dark amber colour. 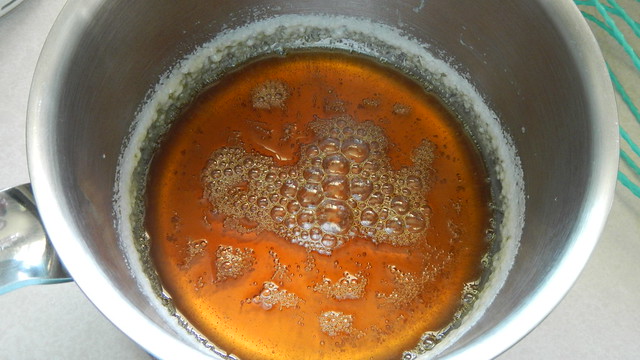 When you get the colour you like, carefully pour in 3/4 cup heavy cream – watch out, because it will fizz up like crazy – and whisk that until smooth. Then tip in 3 tablespoons butter and 1 teaspoon vanilla and stir until those are all melted away. Set the finished caramel sauce aside to thicken up and cool completely. 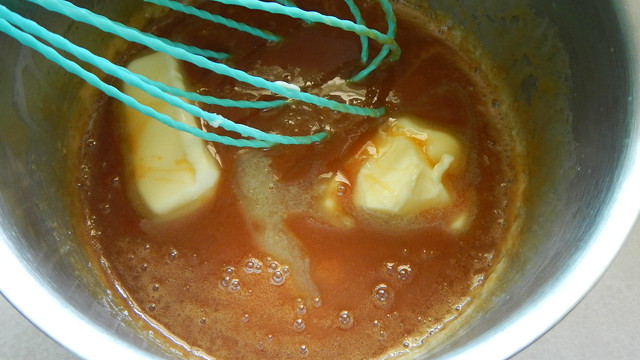 Once the brownie bottom is ready and baked according to whatever instructions you have, remove the outer ring and let it cool completely as well and start working on your filling. 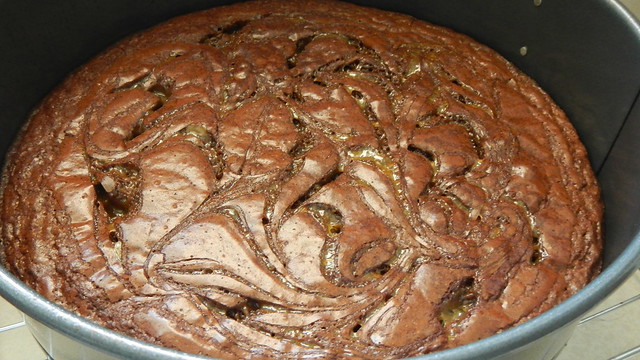 In the bowl of a mixer, beat together 16oz softened plain cream cheese, 1/2 cup granulated sugar, and 1/2 cup brown sugar until smooth and creamy. I mean, it’s gonna be creamy anyway because it’s cream cheese but you get what I mean about the texture, right? Man I need more sleep … 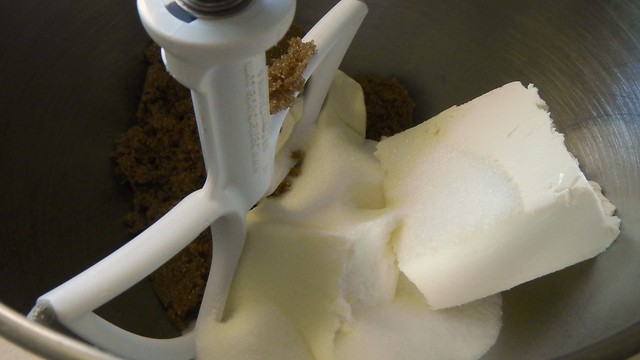 Stir in about 3/4 cup of that lovely caramel sauce you made (or squeeze it from the bottle you purchased you philistine) and add in as well 1/2 teaspoon cinnamon and a pinch of nutmeg. 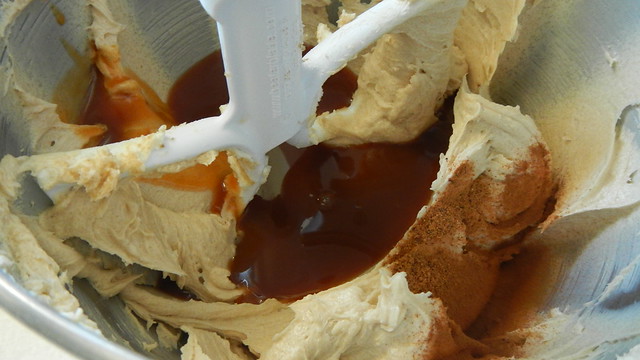 Then I want you to do something totally foreign to me: grab 4oz Cool Whip and fold that in as well. 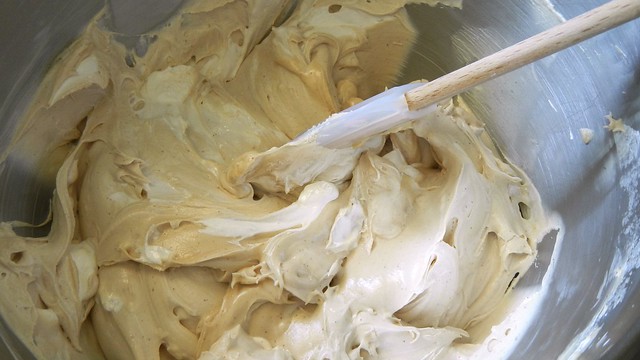 Put the outer ring of your springform pan back on and smush all that Cool-Whipped creaminess into the pan. 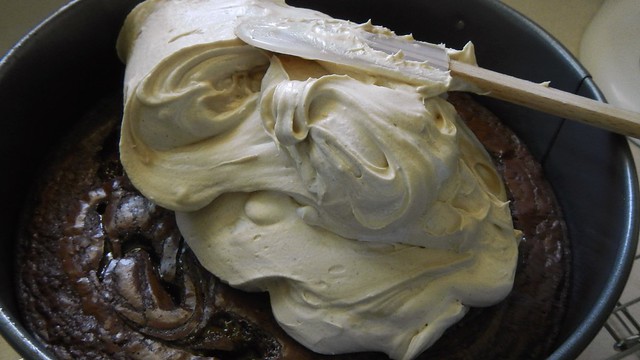 Give it some smoothing out so it *kind* of looks like you baked it, then chuck that in the fridge for 3-4 hours. 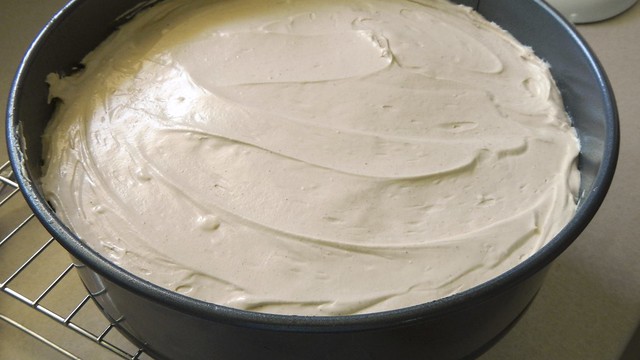 Before serving, crush a bunch of pecans and spread them over top. 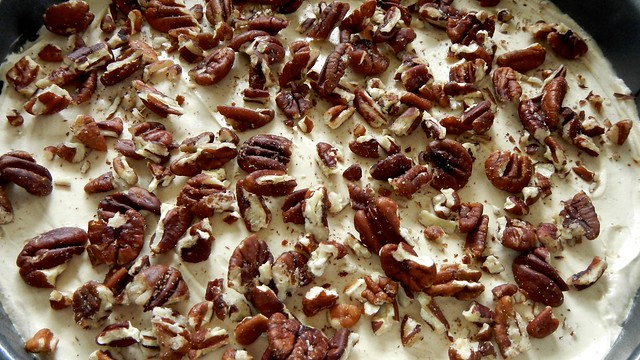 Grab some fudge sauce (I bought it, don’t judge) and whatever’s left of your caramel. 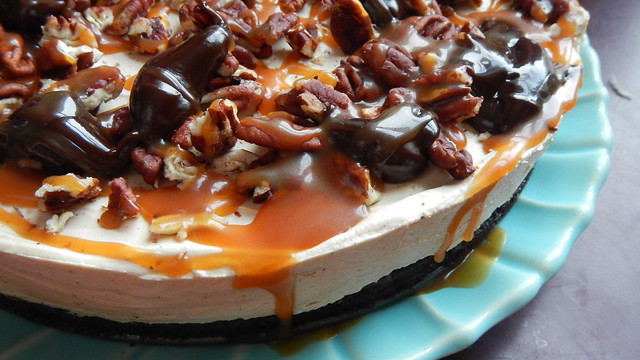 Pop off the outer ring and drizzle liberally with fudge and caramel. The fudge I bought didn’t drizzle, so I have fudge poops drizzled with caramel but you get the general intention here, at least. Keep the leftover cheesecake wrapped up in the fridge for up to a week. Enjoy! 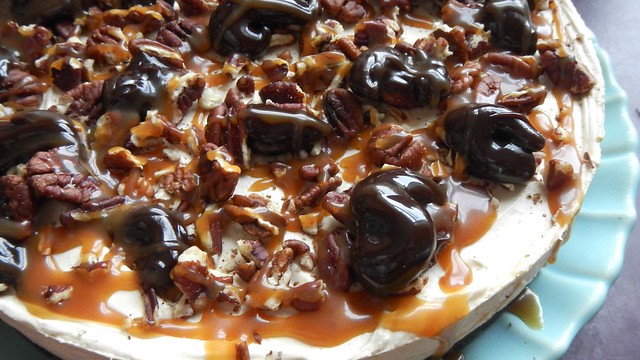