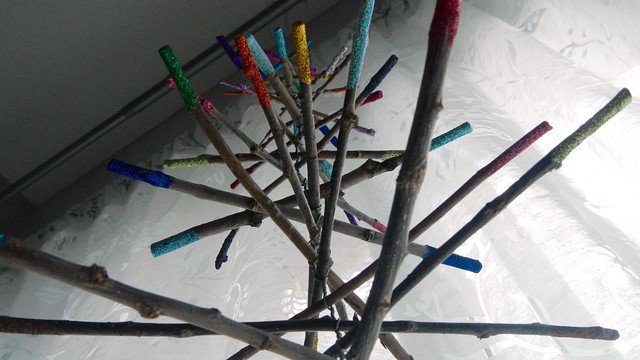 I saw a giant silver version of this on Curbly last week and thought that in our house, where we haven’t taken any Christmas stuff out (because we’ll just have to pack it all up again immediately), it could brighten up the place a wee bit – at least until I give it to someone else. 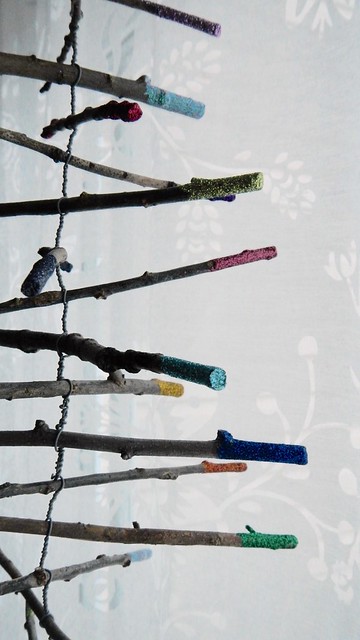 The whole project takes about an hour from start to finish, and that includes harvesting the sticks, so if there are any members of your household you’d like out of your hair for a while – child or adult – give them this task and tell them to have at ‘er. A warning, though, that this is a GLITTER project, so you might have a mess on your hands afterwards. I managed to keep most of mine contained, but that depends on your manual dexterity and how you store your glitter. So BEWARE. 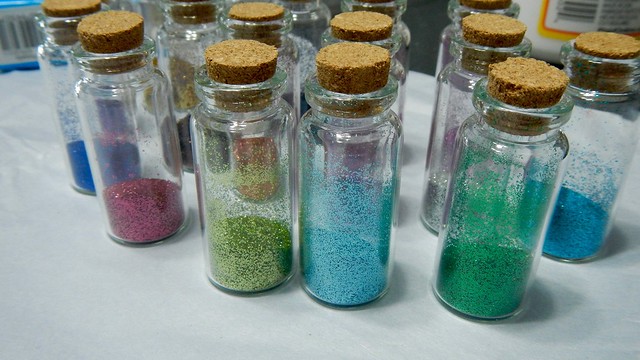 Go out and grab yourself some relatively straight sticks, and cut them in decreasing size to form an elongated triangle when laid out (you know, like a Christmas tree). 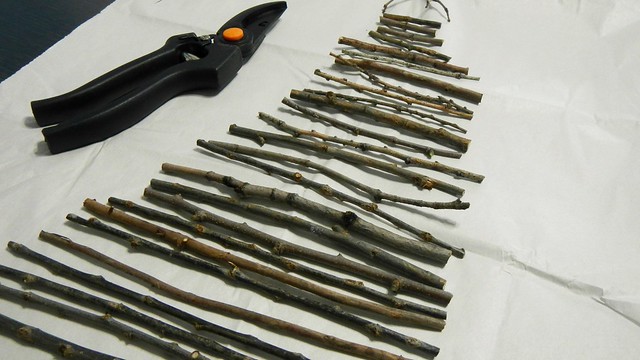 Then grab a paintbrush and some glue and paint the end of your stick with some glue. Not a whole lot – just enough to adhere to glitter, and we all know it doesn’t take much to get glitter to stick to something. 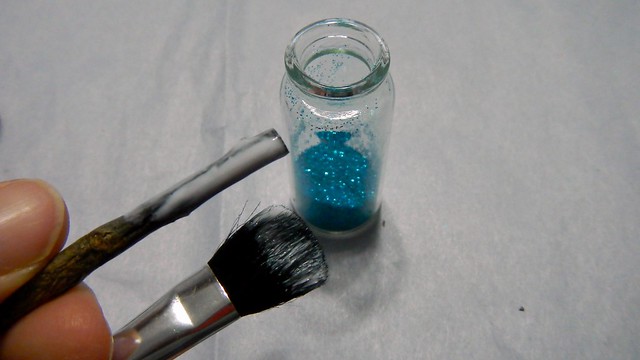 Then take your glitter (mine is in a wee jar) and either sprinkle it over the gluey stick or dip your stick into the glitter. I found it tidier to dip the stick in but you can do as you wish. 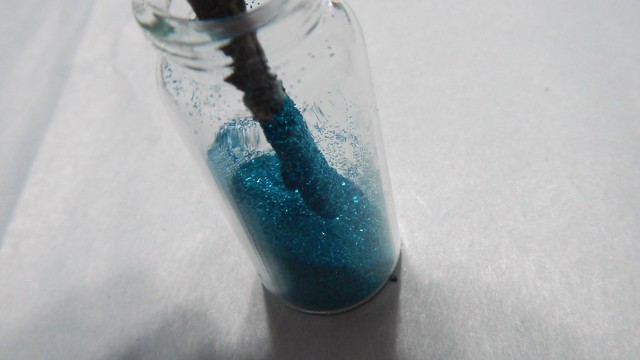 Do the same to all the other sticks. The original version had the tips painted silver with silver glitter but I decided to forego the paint altogether and pick as many colours of glitter as I owned. 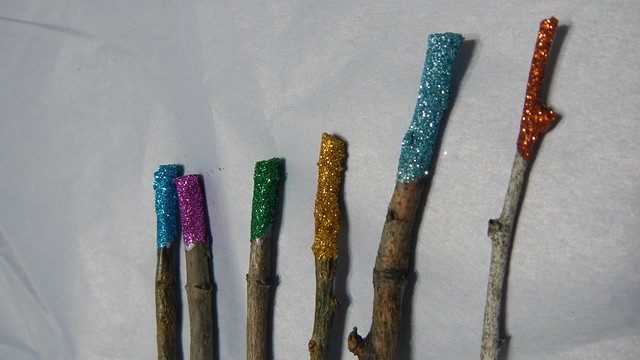 Make sure to get both sides done and then let them sit for a while to dry – if you didn’t go overboard on the glue then it won’t take long. 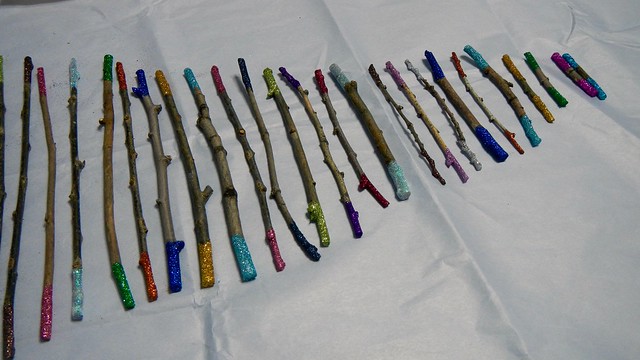 While that’s going on seal your glitter carefully up where it came from. That stuff should be a controlled substance. 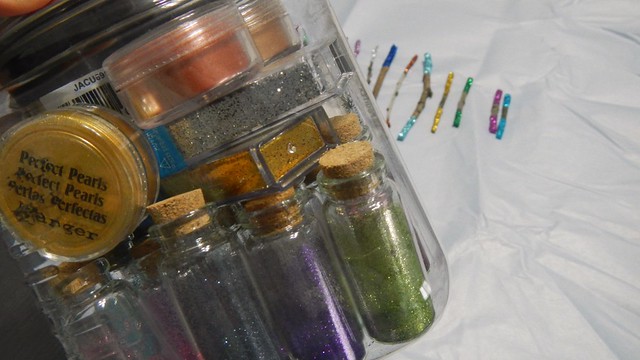 Now find yourself a decent length of wire. I have this stuff that I pulled out of an old downed telephone pole many years back. It’s copper wire with various colours of wrapping. I picked gray as a neutral. 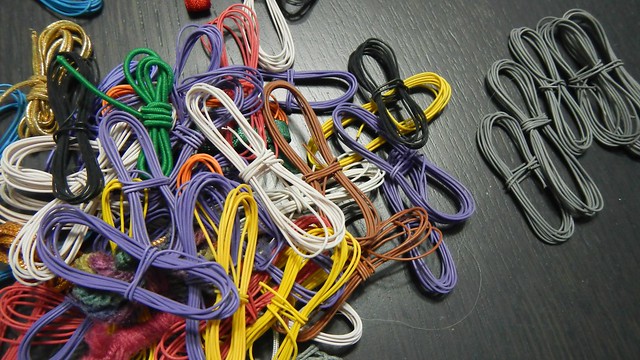 The wire should, doubled, be probably twice the length of your little tree diagram from top to bottom. 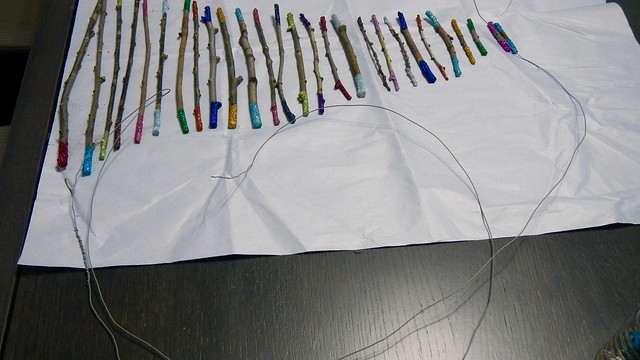 Take the bottom stick and fold the wire in half around the centre of it. Twist the wire several times to hold it in place, and keep twisting to create about 0.5 to 1cm of space between the first stick and the second one. 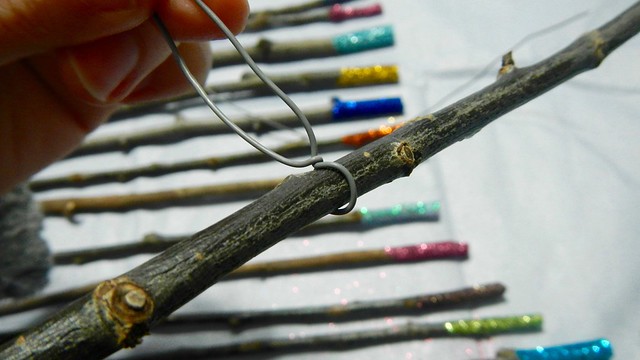 Twist on the second stick in the same way, twisting again to leave some space. 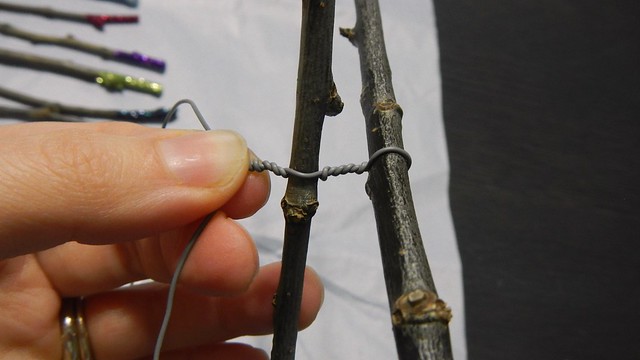 Keep going with all your sticks, leaving spaces in between. 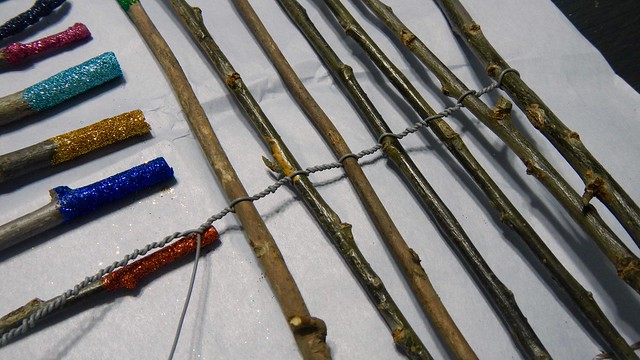 When you’re done, you should have a large amount of wire coming off the top of the tree. You can use this to create a loop for hanging or whatever you like. I left mine long so the people I was giving it to would have room to work with. Twist and turn your sticks to make the “tree” more three-dimensional, and hang it somewhere pretty! 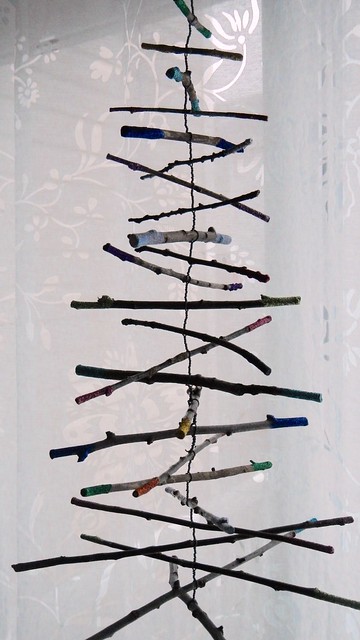