A while back I found this picture sitting next to a neighbour’s recycling bin on one of my early-morning dog walks. I picked it up because the frame itself was HUGE and made of solid wood (it weighed a TON) and I thought it would make a great frame for a nice mirror some time. But that will be a matter of finding a mirror to fit the frame, so that’s a post for another day. After staring at it for a while, I kind of started to like the picture that was in the frame, as well. There’s a rural Canadiana vibe to it that appeals to me. 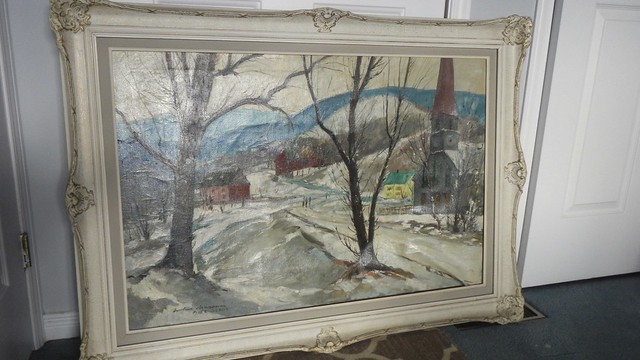 And this wouldn’t be the first mystery painting my family has picked up and invented a story about. Unfortunately any identifying cards on the back have long since fallen off, but we have this signature to go on. 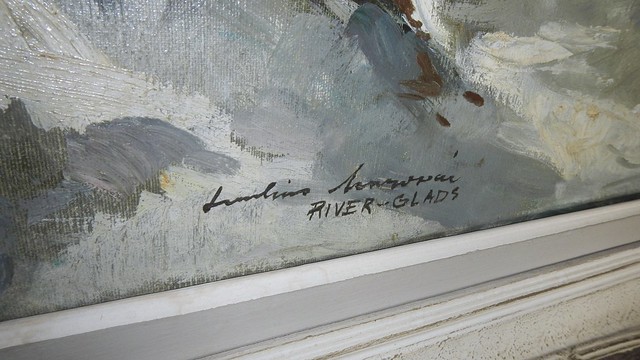 The frame for the canvas itself had come apart and so the picture was damaged in the corner, but it was nothing I couldn’t fix myself. You can’t really screw up a painting that you found in the garbage, right? 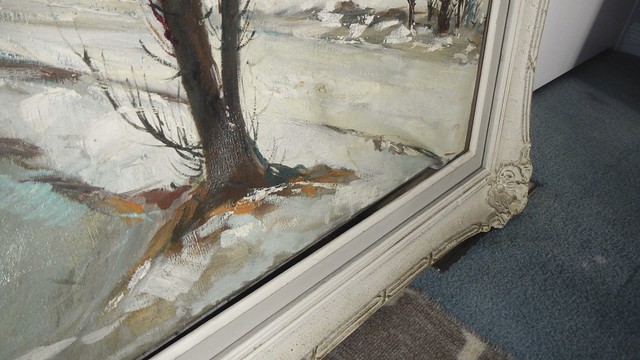 So I loosened the nails and popped the canvas out of the frame. The frame itself will wait for another day. 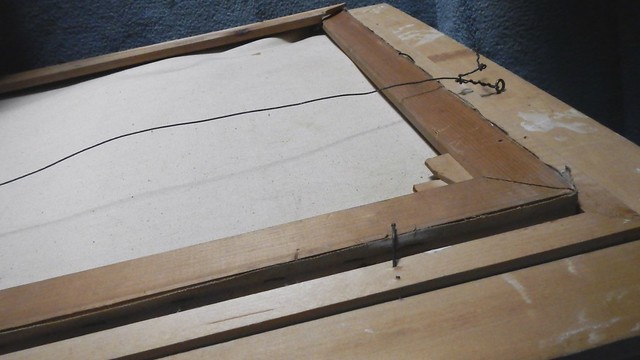 You can see that the stretchers have come apart here (you can also see where some sort of card was taped to the inside of the canvas, probably detailing who the artist was or information about the scene painted). The wood has also warped a bit so I suspect this is an older injury. 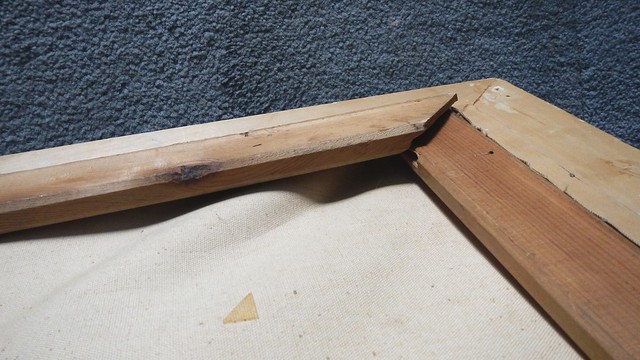 I did some cack-handed hammering and got a bit overzealous with the staple gun, but the frame held together after a while. 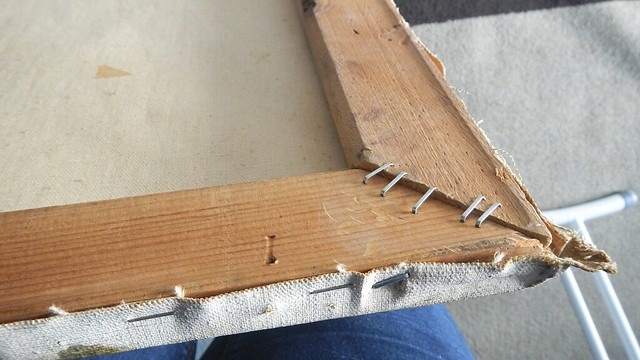 Of course the picture itself was FILTHY. I mean I found it in the garbage. Also any painting sitting around someone’s house for any length of time is going to be covered with all sorts of grease and ick. It’s just a fact. Now if this was something done in oils or it was worth anything, I would not have dreamed of touching it. I would have taken it to a professional and they would have cleaned it with spit (literally, I’m not joking) and gotten it all up to snuff. 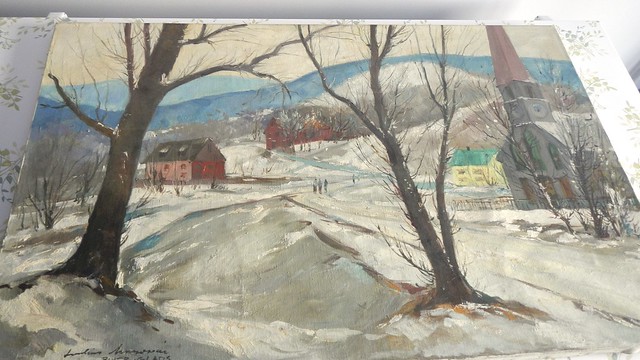 But this was an acrylic painting of an unknown vintage by an unknown painter. And I found it in the garbage. So I used some Method all-purpose cleaner to get the first layer of grease off. DO NOT DO THIS IF YOU PAID MONEY FOR YOUR PICTURE. 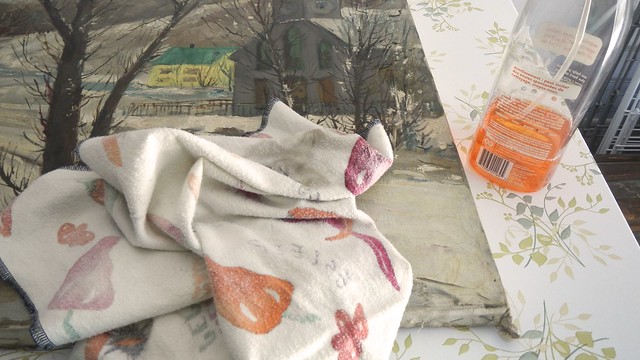 I was hoping to remove the yellow stains on the paint itself, but then I started to realize that the painter actually meant for those to be there. 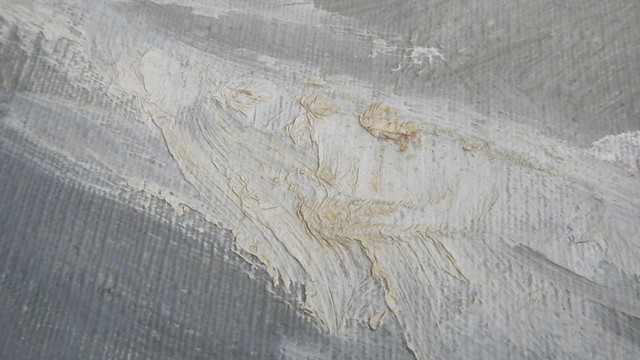 This other greasy goo on the other hand was better off left on my cleaning cloth. I know: GROSS. 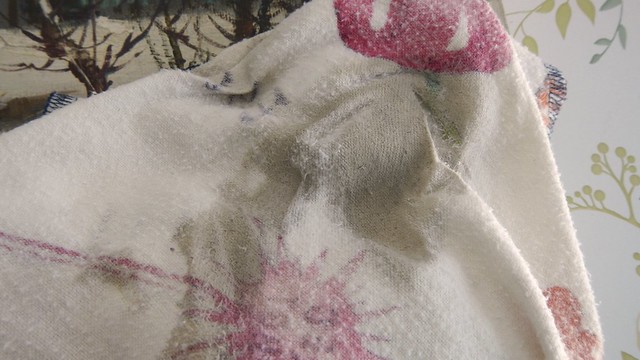 I also deduced at one point that someone had wrapped this painting in newspaper, as this appeared after a bit of cleaning: 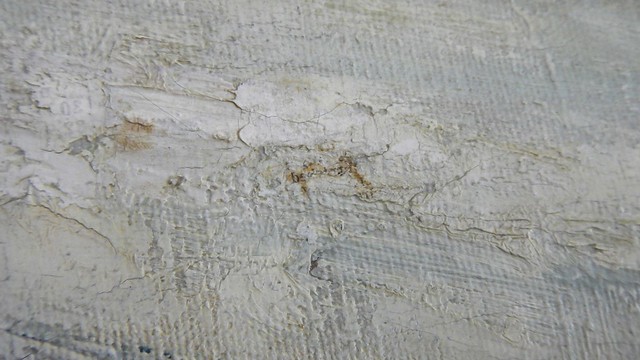 I also decided to try to lighten some of the age yellowing with some lemon juice, and I think it helped a bit. 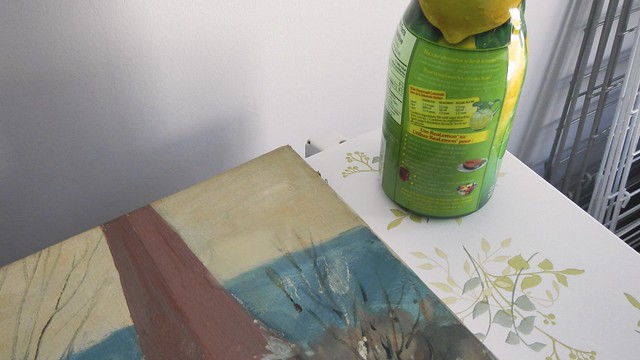 The nice solid frame had an extra frame piece nailed to its innards and rather than build/find a new frame for my brand new free piece of art I decided to pop it out of its moorings and use it. 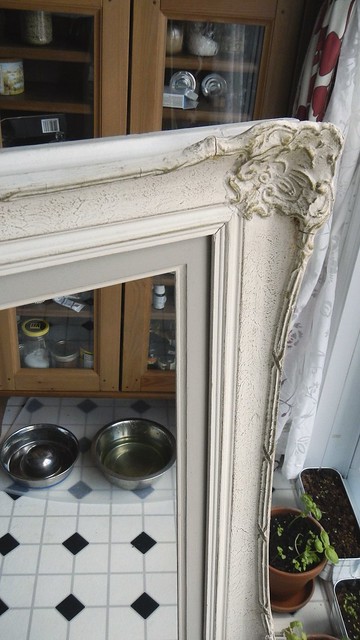 It was only held in place with a few finishing nails after all, which were easy enough to remove. 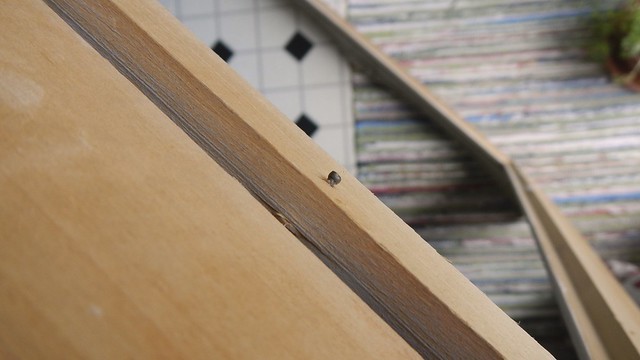 It did need a good cleaning and sanding, however. 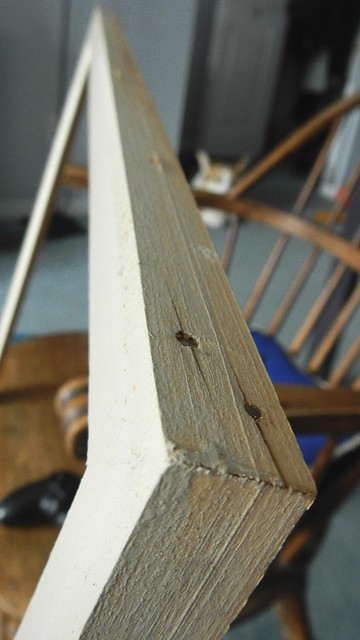 After that, I painted it. I decided to go with a blue frame to complement the blue in the mountains in the background and also to counteract some of the yellowing in the picture itself. 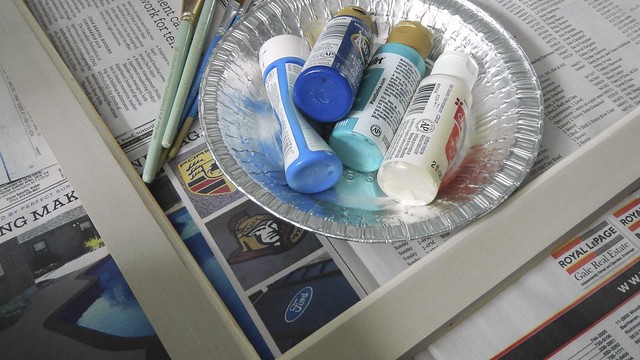 I used some small nails to wedge the canvas back into the smaller frame. 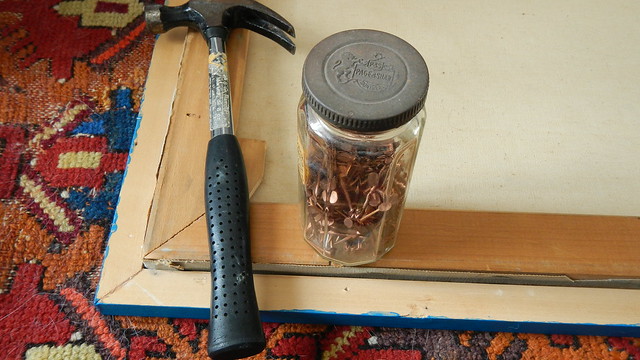 And I attached hanging hardware to the canvas stretchers, as they stuck out farther than the frame insert. 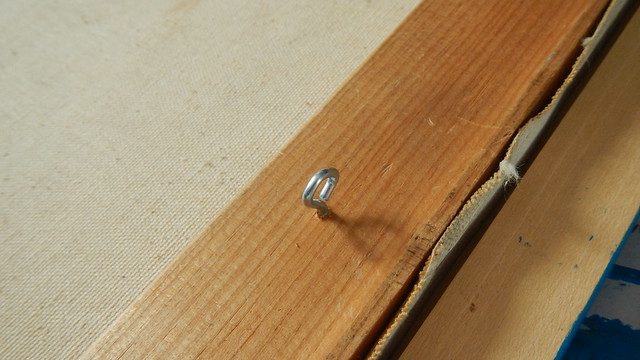 Then I hung it. I am quite fond of it at this point, and it fills a lovely spot in my basement that gets a lot of light in the afternoons.

I would normally not hang anything of value in this spot because it would fade in the sun but this was free, so I’m not concerned what happens to it. 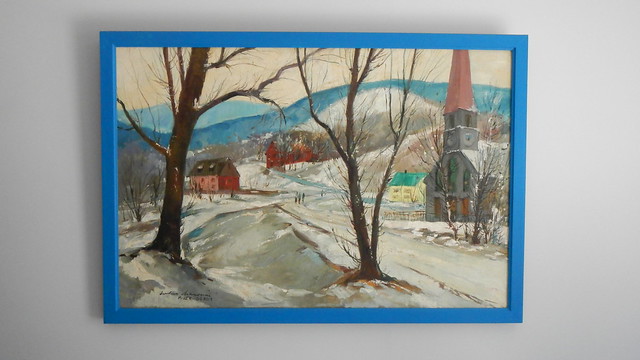 14 thoughts on “Found Frame Part One: A New Classic”