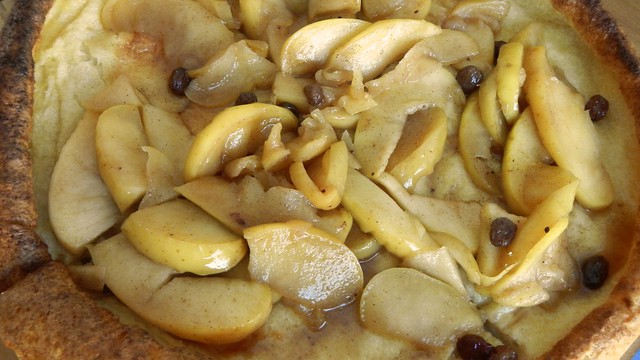 This is a super easy peasy breakfast item that makes you look all fancy pants. Though after you eat it your fancy pants won’t fit anymore. I found it in the paper a while back and saved it for a brunch with Krystopf, Atlas, and Gen. Zod. 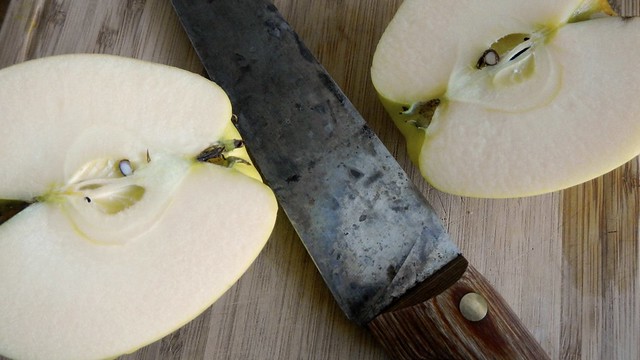 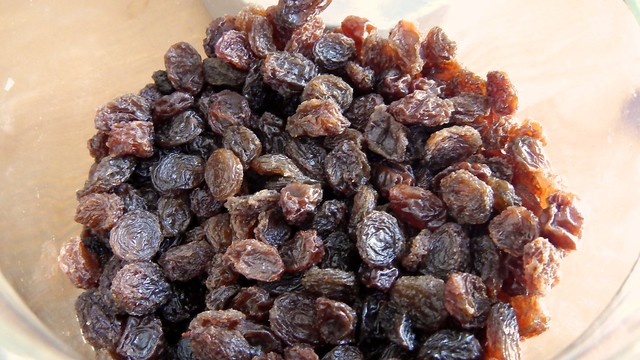 Start with some raisins. Grab 2 tablespoons raisins and dump them in a cup of hot water to soak for 10 minutes. 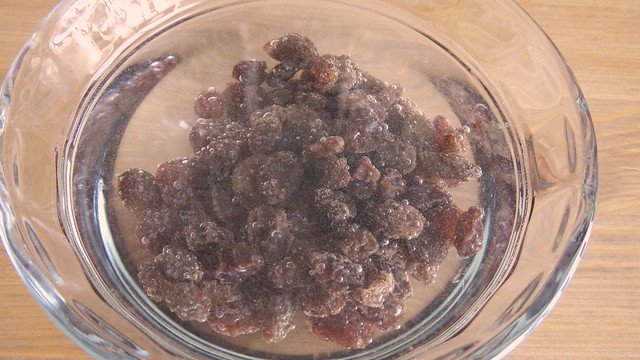 Then find yourself some apples. The recipe calls for 2 Golden Delicious apples and I went with that (though I doubled the recipe in these pictures for two pancakes), because the Golden Delicious is neither too sweet nor too tart and lends itself well to cooking. 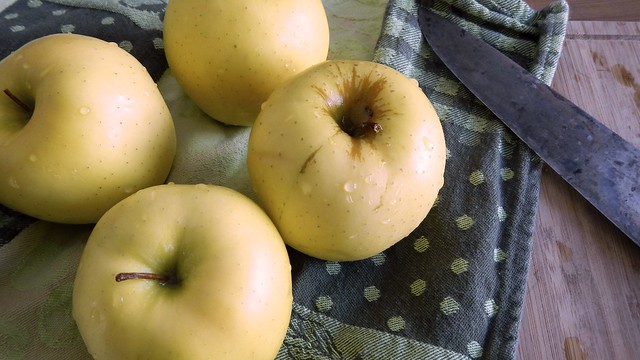 Core the apples, halve them, and then slice them (unpeeled) into 1/4″ wedges. 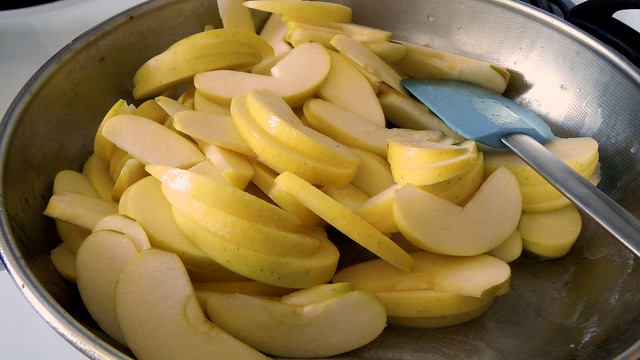 Now, heat 1 tablespoon butter in a non-stick skillet on medium heat until it’s melted. Toss in the apples and cook them until they start to get a bit brown and soft, but aren’t yet mushy, about 8 minutes.

Drain your raisins and toss them in, together with 1/2 teaspoon ground cinnamon and 1/4 maple syrup (use the real stuff here, don’t make me cry). Stir that around and then reduce the heat to a minimum just to keep things warm. 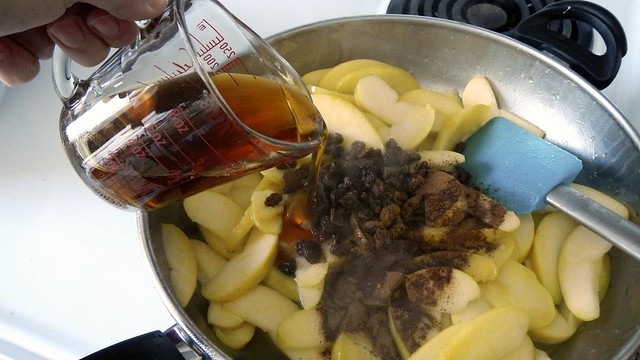 You can also transfer the apples to a container to cool and store them in the fridge until you need them. 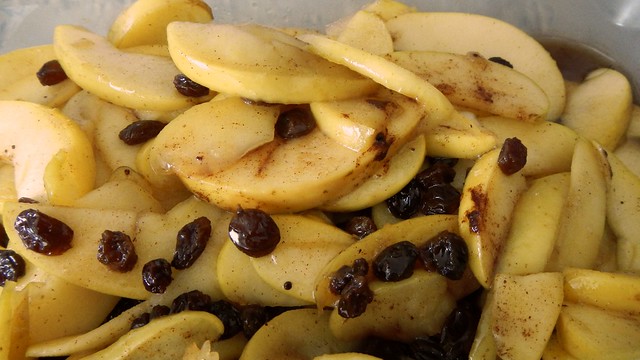 To make your big fluffy pancake, heat your oven to 450°F and grab an oven-safe non-stick pan or cast iron skillet. I went with the non-stick option on these and it worked great. Grab a bowl and dump in 1 cup flour (you can do half whole wheat and half white if you wish, that’s up to you).

In a separate bowl, beat together 1 cup milk with 1 tablespoon maple syrup and 1 teaspoon vanilla extract. 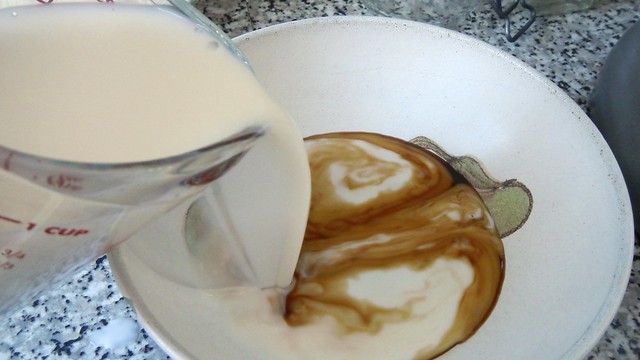 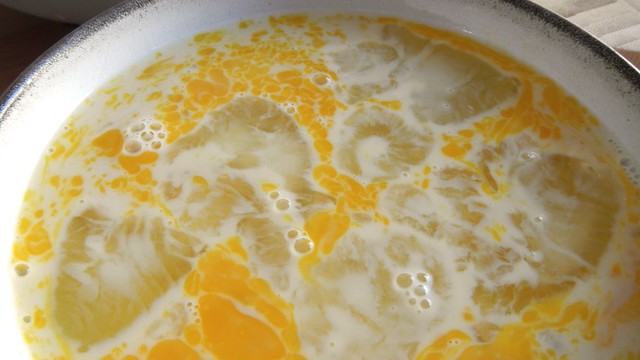 Look at the size of that yolk in my tiny hand. 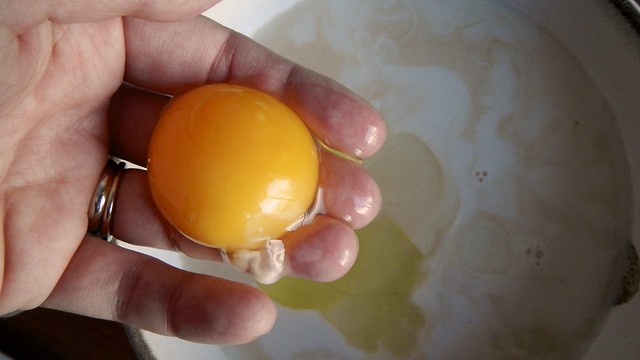 Add your liquids to your flour and whisk until just combined. You can have some lumps. 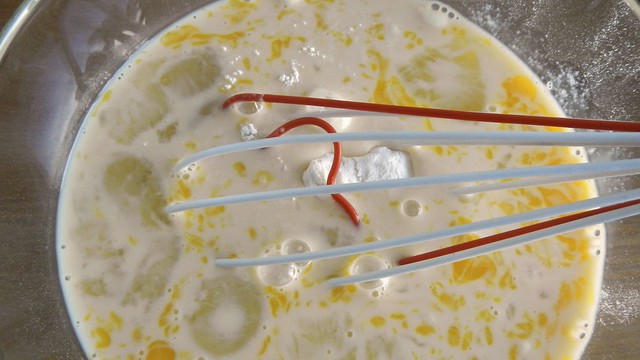 Put your pan or skillet on the stove and heat it so that 1 tablespoon butter melts. Slide the pan around until the melted butter coats the whole surface. 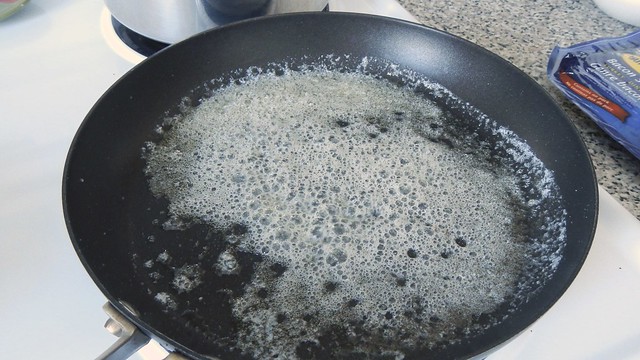 Pour your batter (lumps and all) into the pan and slide it into the oven. Bake it for 15-20 minutes, until it’s all golden brown and puffed up into a giant soufflé-like object. Leave the oven door closed until it’s done. 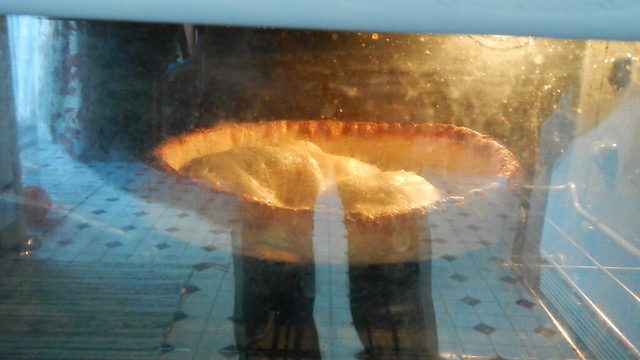 When you’re ready, remove the pan from the oven and slide the pancake onto a cutting board (it will deflate, don’t worry). This is where the non-stick really comes in handy. 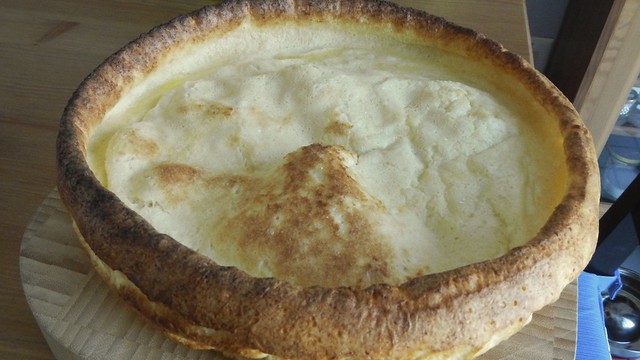 Spoon the warm compote all over the pancake and cut it into four wedges – serve immediately. I promise it’s worth it. I doubled the batch for the apples but I made my batter in two separate batches so that while we were eating the first pancake I could slide the second one into the oven. 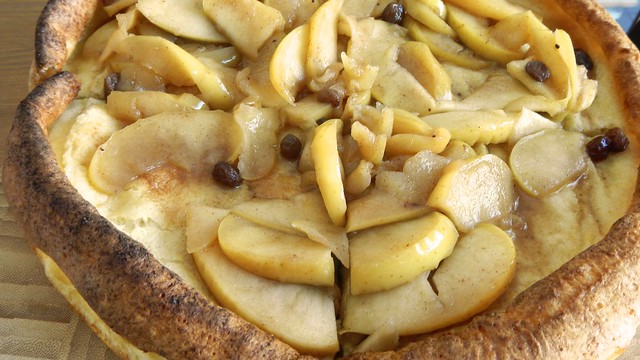