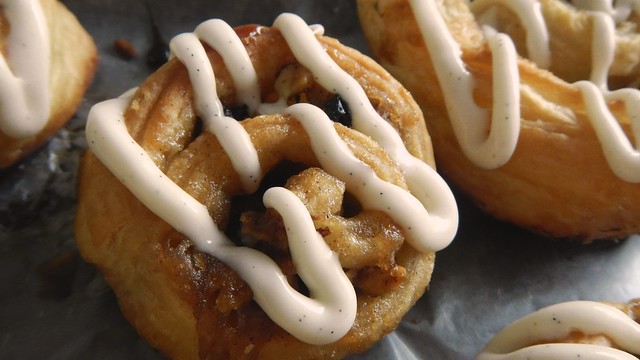 As you know, I’m on a quest to create the best cinnamon bun out there, for my tastes, at least. People are very particular about their cinnamon buns: some like them frosted, some like them dry, with nuts, with raisins, with nothing … I like mine soft and sticky AND frosted. Raisins are okay but nuts I can usually do without. 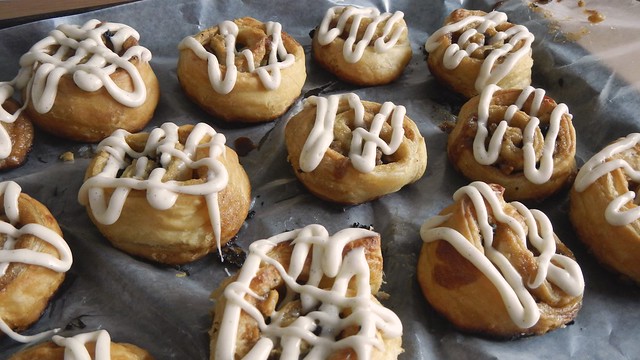 I don’t make cinnamon buns very often because of all the kneading and rising that they entail (and my current house is a little too cold at the moment). But these ones were easy – they’re not actually cinnamon buns in the way you’d expect – and they served to assuage my craving until I have the time and the temperature to do another batch for real. Preheat your oven to 350°F and line two baking sheets with parchment paper. I wouldn’t skip the parchment paper, as the sugar coming out of these will caramelize and stick, so it’s better that it sticks to the parchment and not your pans. 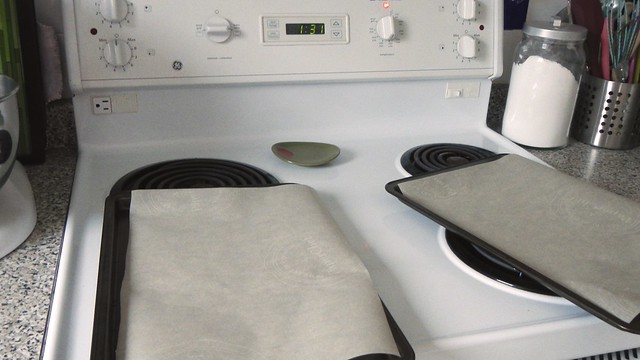 Grab a small bowl and dump in about 3/4 cup brown sugar, 2 teaspoons ground cinnamon, and 1/2 cup softened butter. Or less. You might want slightly less, as mine oozed everywhere. But if you like to live dangerously, then follow me! 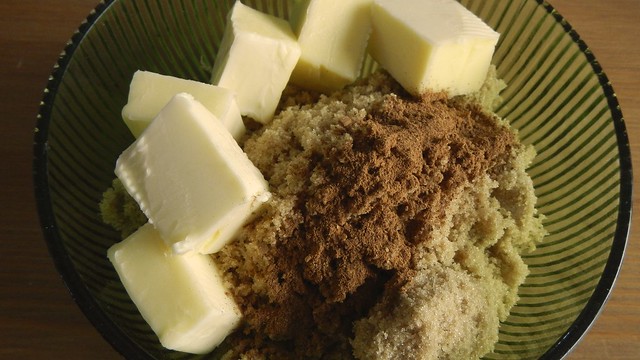 Give that a good mooshing with a fork or pastry cutter or even your hands, doesn’t matter. 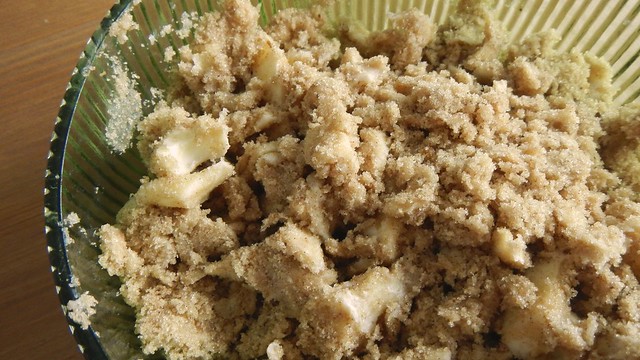 Now grab a package of thawed puff pastry (you will need to think far enough ahead for this to grab the box out of your freezer and chuck it in the fridge the day before, but that’s not that hard) and roll out the two rectangular sheets. If you bought the stuff that comes in blocks, then just roll it out flat. 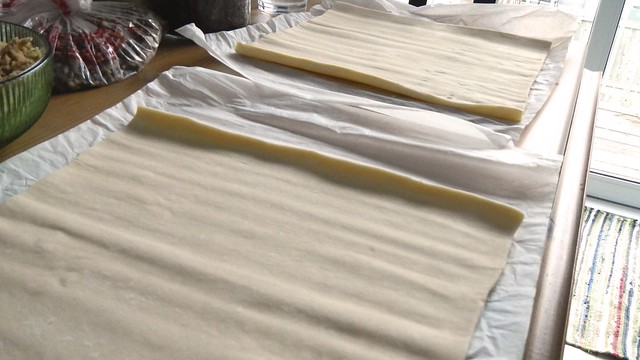 Sprinkle the sugar mixture generously and evenly across the surface of the pastry. 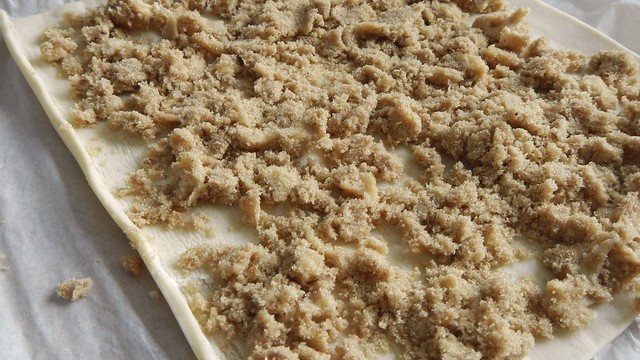 If you’re feeling like going further, add a sprinkling of raisins and crushed walnuts as well. 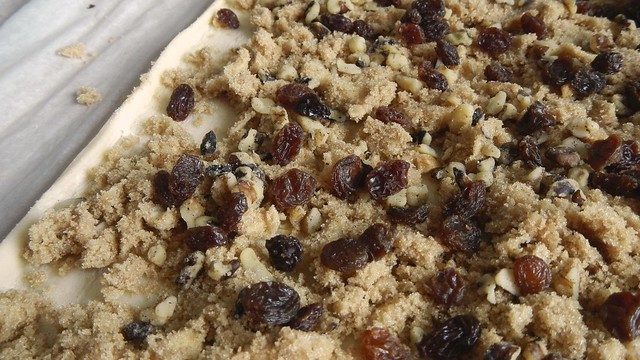 Carefully roll each sheet up into a tube. Chuck that in the fridge or freezer for a few minutes to stiffen up. 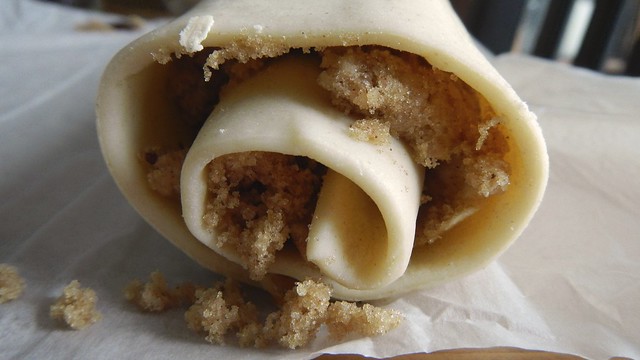 Slice each tube into disks about 1 1/2″ thick. I think I ended up with 8 buns from each tube. 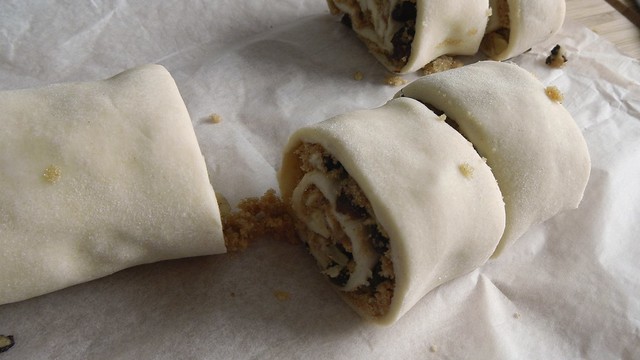 Lay those flat on your baking sheets and shove them in the oven for 10-15 minutes, until the pastry is puffed and golden and the butter is all melted. 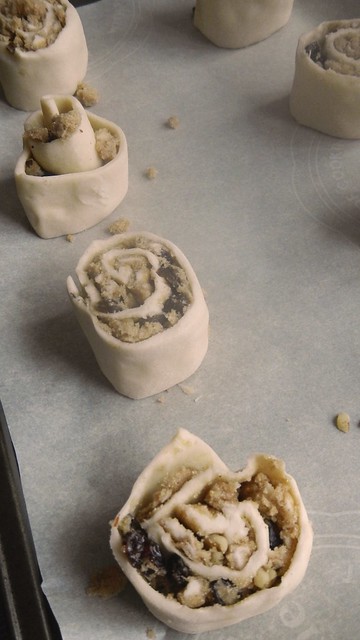 Remove the sheets from the oven and carefully slip the still-hot buns onto a sheet of waxed paper or parchment to cool completely. Feel free to flip them upside down while they’re still warm and oozy if you like your sticky part to be on top. 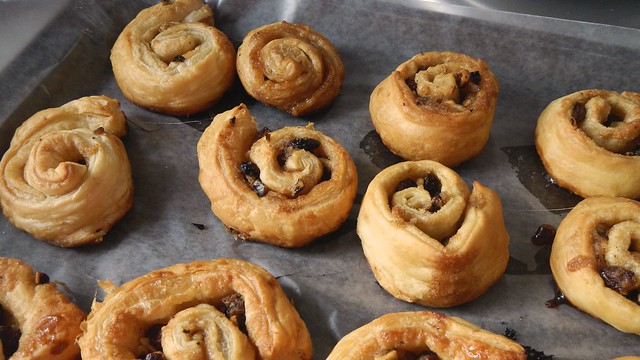 If you leave them in the pan they’ll stick to the caramelized sugar at the bottom and then they won’t come off and you’ll be sad. 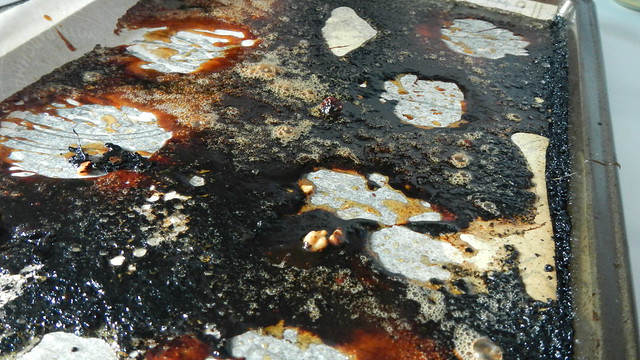 When they were cool, I mixed together about 1/2 cup icing sugar with 1 teaspoon vanilla bean paste and a dribbling (probably 1 tablespoon) of whipping cream. 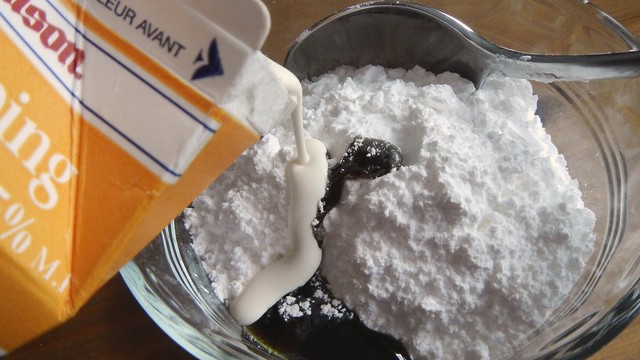 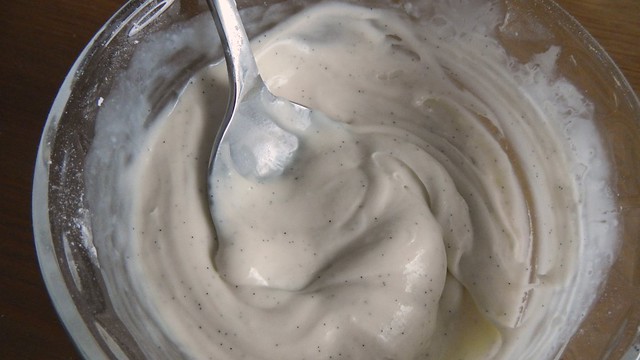 I dumped it into a small plastic bag. 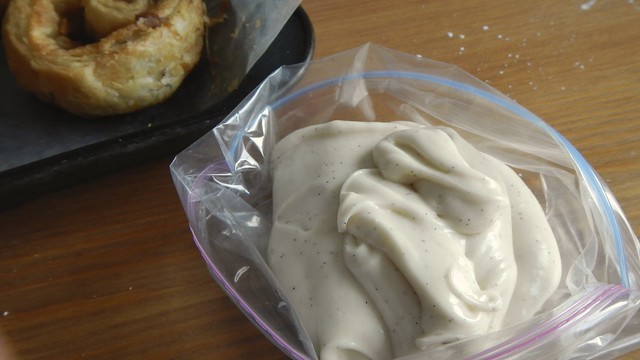 And piped it onto the cooled buns. 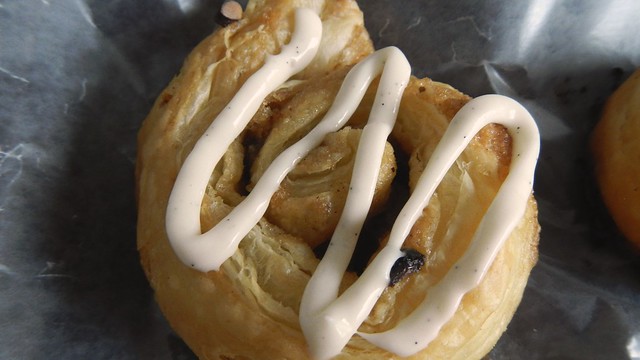 Try not to eat them all at once, okay? 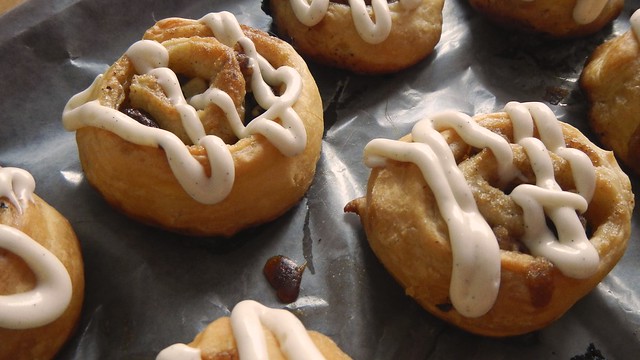