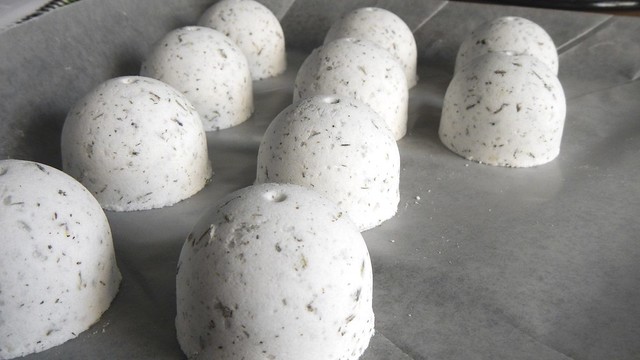 I don’t take baths, but I know someone who does, and I love the science behind putting bath bombs together, so the time has come to make them for real. I looked at a bunch of different recipes on the internet, including Martha Stewart, and many of them in the comments complained that they didn’t work properly. Several of them pointed to this basic recipe from Lynden House as the best one they’ve used. So that’s what I used.

Grab yourself a decent sized bowl, plastic, glass, metal – whatever. Tip in 1/2 teaspoon essential oil of your choice. 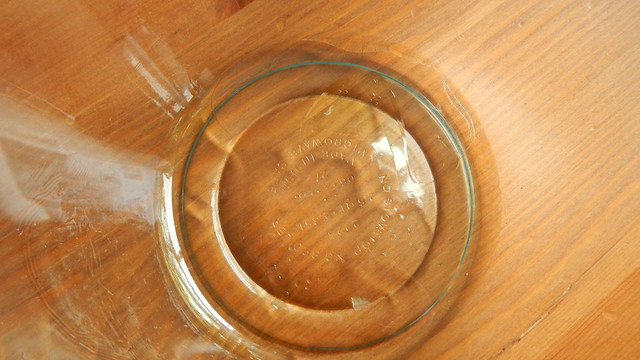 This particular one I used a mixture of sweet orange, patchouli, and lemongrass. I find patchouli too strong on its own but it’s nice when you combine it with other things. Then it reminds me less of this scene from High Fidelity… 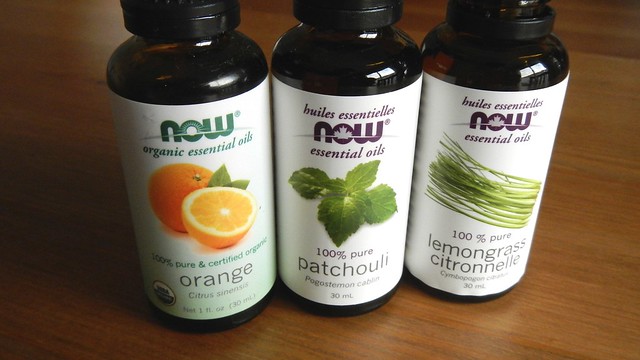 Add in as well 1/2 teaspoon of water, liquid dye, or witch hazel. Many people prefer witch hazel because the water is reactive with our next set of ingredients and you can make errors that way. I certainly did, and I’ll show you in a minute.

In my mind I also decided to add some orange zest to this shebang, which is a great idea. If the zest is dried. This is fresh. Meaning it contains water. 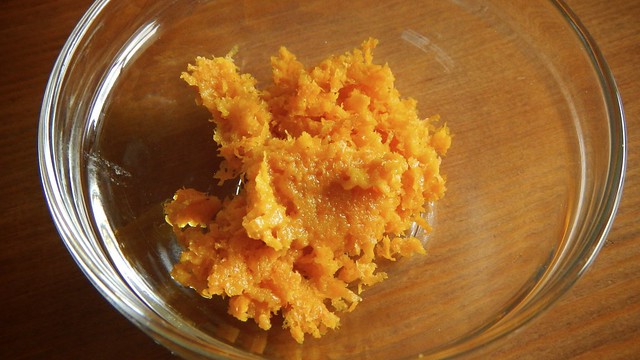 Which is reactive with citric acid. Which is another ingredient. 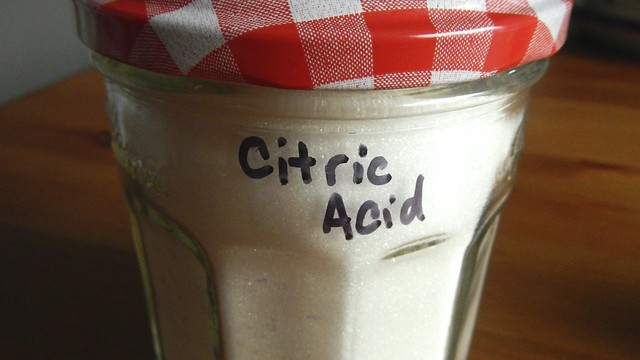 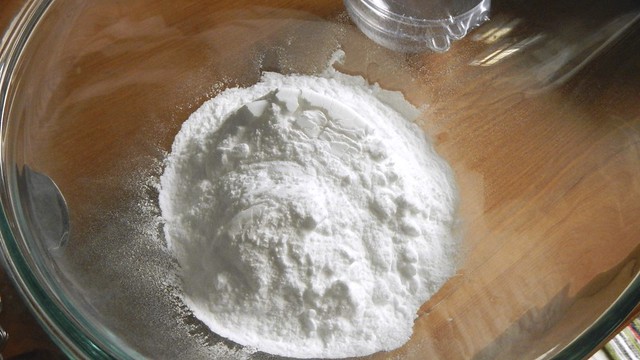 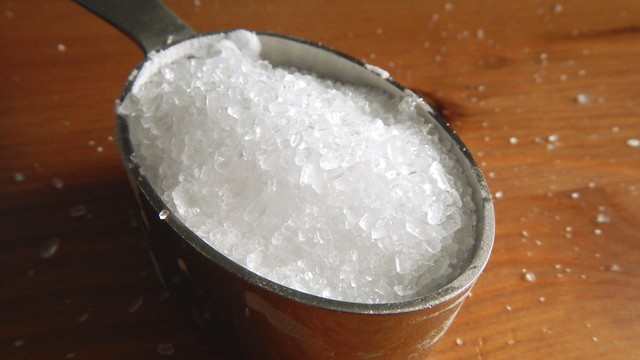 And 3/4 cup citric acid. You can pick this up from a variety of health food stores. I’m currently having some trouble finding a store that hasn’t run out at the moment, but it’s pretty common. 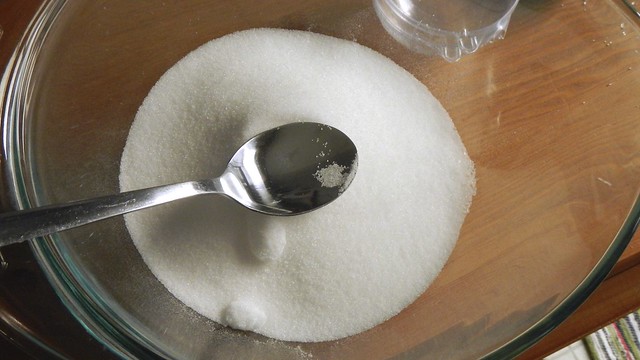 Start mixing that up with your hands. You want to get it to the point where it starts to squish together in your hands and holds its shape. Resist the urge to add more moisture – if you keep mixing you’ll probably find that you don’t need it. 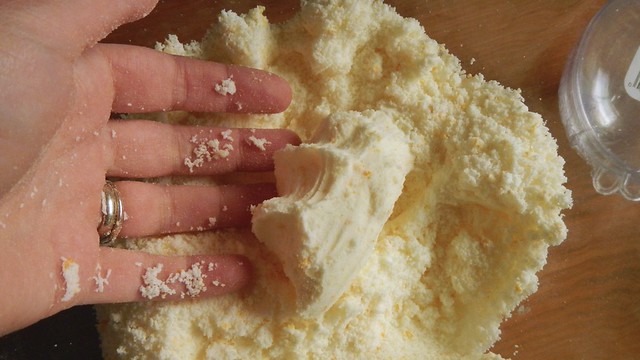 Now grab a mold. You can use plastic ornaments (Dollarama) and make giant spheres, but I found I enjoyed the size of one of those plastic capsules you get out of vending machines. 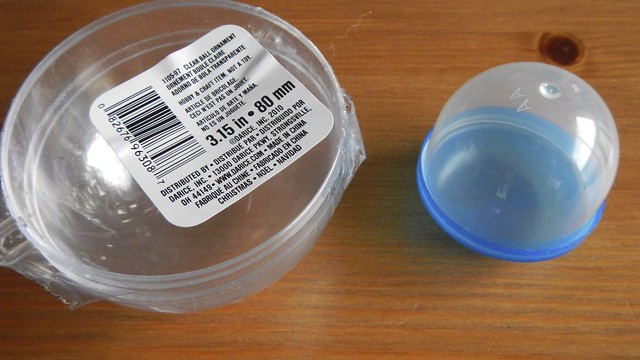 Pack your mixture into the mold and press it down tightly. 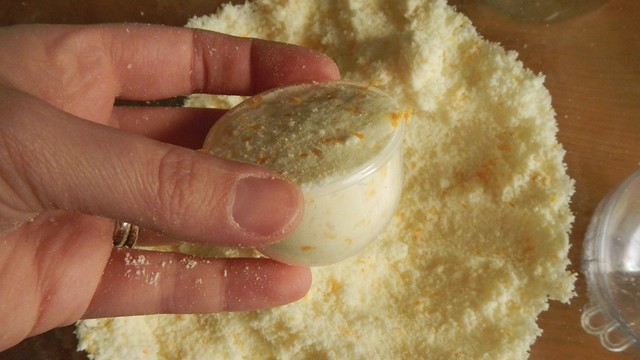 Open the mold and set your bath bomb on waxed paper to dry overnight. 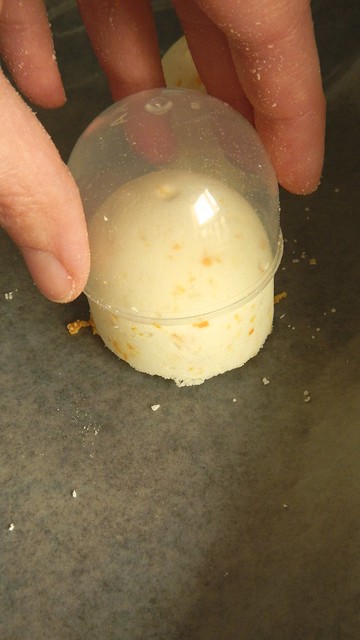 This recipe made 9 or 10 bombs in that particular size. 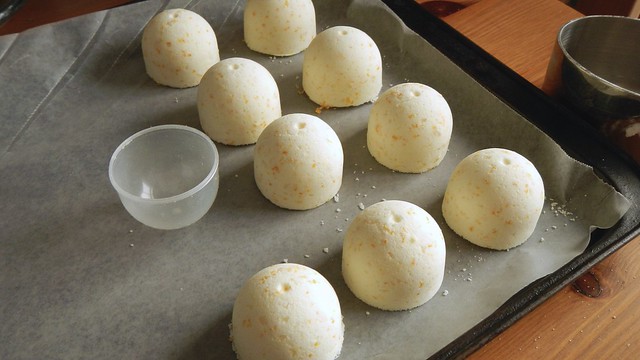 But of course because I’d added that zest, it started to react with the citric acid. 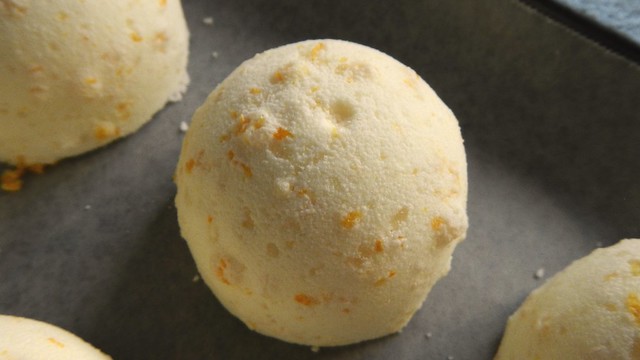 They started to expand. 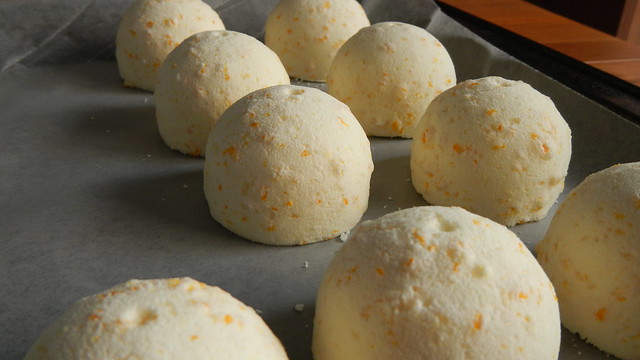 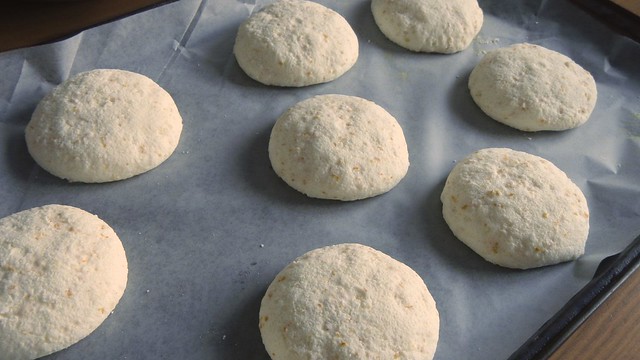 I don’t think they’ll be as fizzy but they still smell nice. Once I can track down some more citric acid I’m going to re-make that batch. 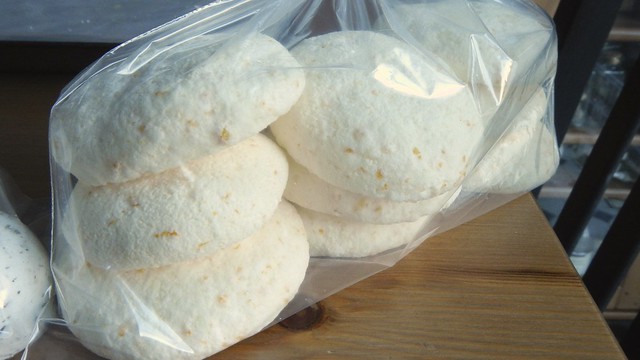 Another batch I mixed together some dried lavender flowers with some dried sage from my own garden. I used lavender and sage essential oils as well. 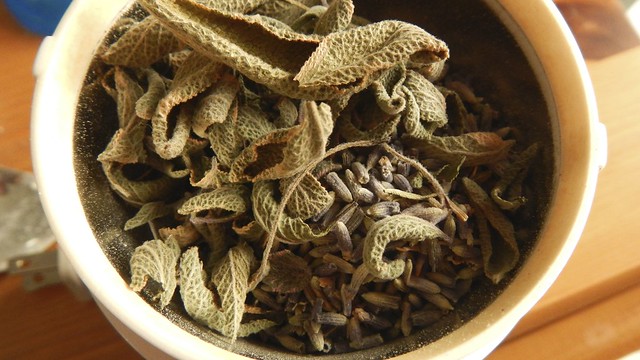 I whazzed it up in my spice grinder and had this smelly powdery stuff left over. 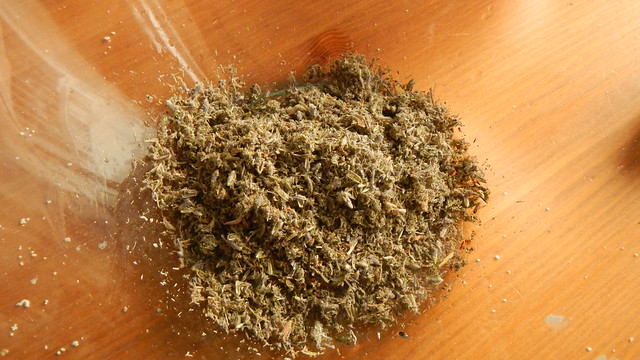 This mixture ended up more dry than my last one, partly because of the plant material and partly because I had less citric acid to work with and so compensated with extra baking soda. If the mix is too dry, don’t add water to it – add a drizzle (a TINY drizzle) of olive oil instead. It’s good on the skin and won’t react to the acid. 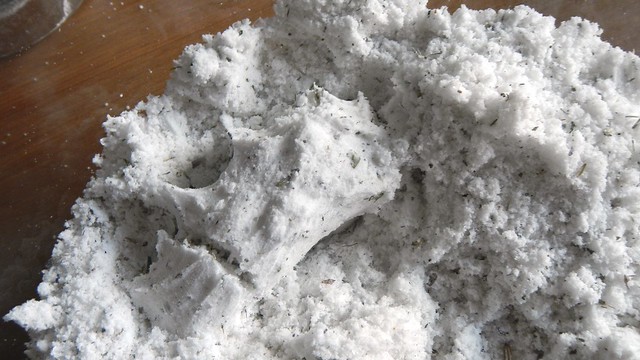 These ones packed perfectly into ten tiny bombs with no expansion. 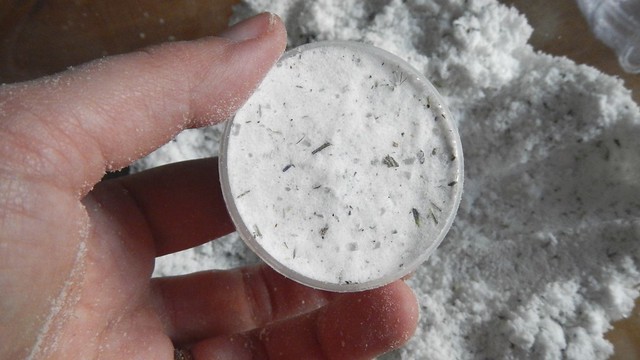 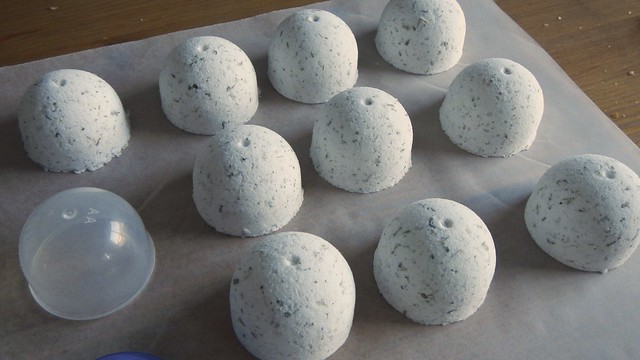 I had a few crumbs left over in the bottom of the bowl. 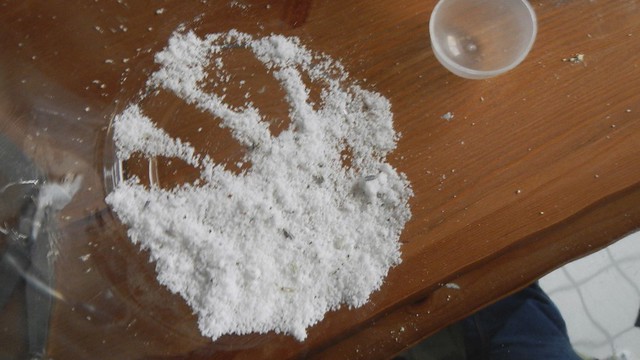 So I put some water in to enjoy the fizz. 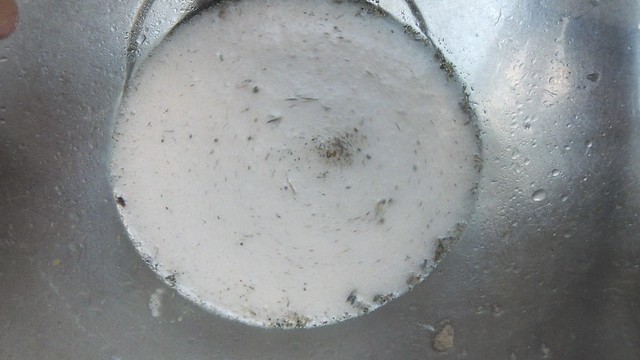 Store your flavours separately in jars or bags so the scents don’t mix. They make great gifts and are pretty enough to display (though I wouldn’t leave them in open air in humid places like the bathroom). 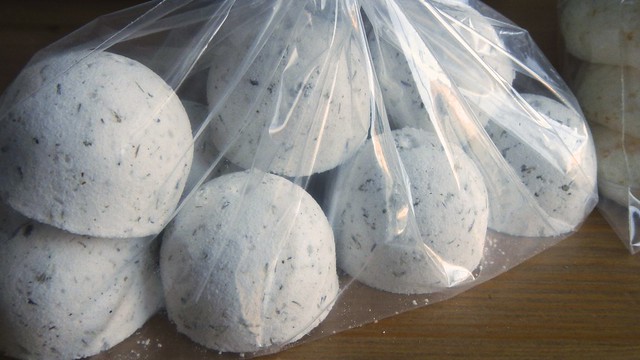