This.  This is my favourite belt.  I bought it at the mall downtown during a free period in high school when I was fifteen years old.  Immediately after I purchased it I ran into a boy on whom I had a crush at the time and he complimented me on my choice.  So it was my extra favourite belt for a while (I saw this guy at the grocery store a few months ago — he has not aged as well as my belt …).

Seventeen years later, it’s still my favourite belt.  It fits flat against my body so you can’t see it if I have sweaters over top.  It never pinches me if I eat too much.  I never have a horrible allergic reaction to it like I do with most belts, because the metal of the buckle never touches my skin.  And most importantly, all these years later, it still holds my pants up!  You really can’t get any better than that.

The problem is that the rainbow pattern doesn’t necessarily GO with all my clothes these days, especially the business suits I wear to work (go figure).  And while the elastic still holds, I’m sure it’s pretty tired after seventeen years of hard labour and should be retired.

So I decided to make myself some new ones.  How hard could it be?  Turns out, the making is not the difficult part — it’s the GETTING that’s hard.

I ended up having to order the buckles from Etsy, because the ones in fabric shops were either too big or too small, and I wanted these new belts to be the same size as the 1″ old one.  So for your reference, these are 1″ belt buckles in the interlocking “bottle opener” style.  They’re not as easy to find as you think.  I ended up buying five sets.  They very helpfully were labeled with “right” and “left” so I knew which sides to put together.

The non-rolling elastic I picked up from Michael’s and Joann.  The hardest colour to acquire was black, believe it or not.  I guess there’s not much call for 1″ wide elastic.  I did look at suspender elastic on Etsy but it was too expensive and came in much shorter lengths.

Anyway, I found six colours I liked.  So, with the five sets of buckles I bought, plus the original buckle from my retired rainbow belt, I can make six belts!

I measured the length of the old belt and then the width of my hips, where I wanted the belt to be.  Because of the elastic there was a difference of five inches for stretch.

So my measurements were basically the diameter of my hips, minus 5″ for stretch, and then plus 1 1/2″ on either side so I could fold it under when I sewed.

Then it’s easy to match up the buckles (make sure they’re facing the right way), tuck the elastic through and sew it up. 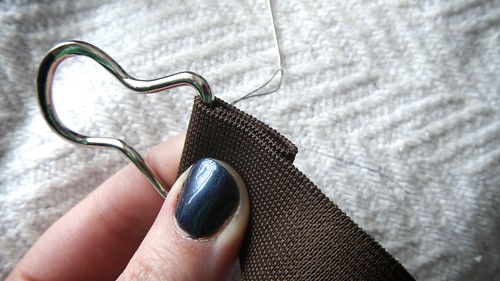 Still incapable at age 32 of sewing in a straight line.

I did, however, manage to get the buckles matched up and facing the right way every time.  So I have that going for me.

I love my six new belts.

Bye-bye rainbow elastic.  We had fun.

The best part about them is that not only are they comfortable around my hips, but I can also wear them higher on my waist as an accessory to a dress and they’re just as comfortable.

14 thoughts on “My Favourite Belt”